On October 23, the day after the shooting in Ottawa, Halifax police responded to a call:

…at 8:36 a.m. regarding a man walking in the area of Duke and Brunswick Streets in Halifax carrying what was believed to be a rifle. He was reported to be wearing black cargo pants and an ear piece and was concealing what is reported to be a rifle wrapped in black cloth. We only received the one report of this man and have yet to confirm this information. We’ve met with the complainant and are continuing to investigate.

You’ll recall that Halifax went a bit nuts that day, with half of downtown cordoned off, cops everywhere and lots of institutions—City Hall, the downtown Dal campus, Citadel High—on “lockdown.” The police scoured the town, and a few hours later,

a second call was a report received at 11 a.m. about a man who had left a firearm on a Halifax Transit bus. The man left on foot walking southbound on Albemarle Street in Halifax. He was quickly apprehended at 11:08 a.m. near Argyle and Carmichael Streets without incident, and the firearm was recovered from the bus.

Buddy at the second call didn’t fit the description of buddy from the first call, and cops now say the two calls were completely unrelated. My guess is you could search every Halifax Transit bus in town and every tenth one would have somebody packing, just this guy was stupid enough to accidentally leave his gun behind when everyone was worked up about Ottawa and somebody else was reported walking around town with a gun.

Anyway, about that first call. 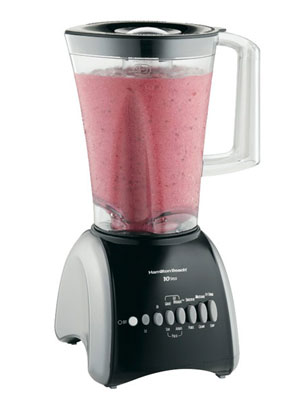 I have it from a couple of different sources that that rainy-ish morning, a downtown chef had to transport a blender full of food a couple of blocks across downtown, so threw a blanket over the blender to keep it dry. The chef went on to his place of business and got to work, oblivious to the crazed police operation unfolding on the streets outside. He worked the lunch shift and cleaned up, and only then turned on the news to hear of the commotion. The chef then sheepishly called the police, saying he thought he was the cause of all the turmoil.

Turns out, though, that like the guy packing heat on the bus, the chef packing a blender didn’t fit the description of the first gun report either.

I contacted the police yesterday to ask about all this, and they wouldn’t comment one way or the other on the blender-packing chef. Spokesperson Holly Tooke did tell me, however, that the first gun call, the one that got everyone worked up, “was an unfounded complaint. We believe the call was genuine, however we were unable to find any corroborating evidence (i.e. video, witness, etc.) to substantiate the call.”

In other words, the guy who called in the gun honestly thought he saw someone walking around downtown with a rifle, but he seems to have been mistaken. And if you ever find a gun on a bus, do us all a favour and just turn it into lost and found without involving the cops, k?

Nova Scotia’s Freedom of Information office has a five-year backlog of files. Some of those files are mine, but I long ago gave up on appealing to the office because I knew it was pointless, which is entirely the point: delaying access to government information is effectively denying access to information. That’s part of the culture of government secrecy in Nova Scotia.

New review officer Catherine Tully says she has a plan to address the backlog, so good on her, but I’m not holding my breath.

This reminds me of an incident I wrote about when I was a reporter in rural Arkansas. A detective working with the local sheriff was visiting his childhood buddies in the town of Brinkley, a couple of counties over, got drunk and made an ass out of himself at the town’s public housing complex:

Det. Brett Simpson repeatedly patted down several black men for drugs, grabbed a Brinkley police officer’s gun, threatened the men with it, and, after returning the gun, confronted the officer with a raised fist, according to a statement given by Ryan Hollowell, an officer with the Brinkley Police Department.

People at the scene said Simpson then drove through an apartment complex firing a gun out the window of his truck, but police could not verify those accusations.

Throughout the evening, according to the statement, Simpson repeatedly referred to the black men with racial epithets.

The Brinkley police and the local sheriff had kept the incident quiet, and Simpson was given a slap on the wrist, a 10-day suspension. But I got wind of the incident and called Hollowell, who I had never met or talked to before. I told him that I knew about Simpson’s drunken romp, and asked for the police incident report.

“Well, I guess the freedom of information law says I have to give it to you,” he said in a wonderfully melodic southern drawl, and 10 minutes later the report was coming across my fax machine. The next day the story appeared on the front page of the paper, and soon after Simpson resigned. A racist cop was taken off the streets.

I have no doubt, none at all, that had the same thing happened here, I would be denied the police incident report. Yep, good ol’ boy Arkansas has better freedom of information laws, and a better culture of compliance with those laws, than does Nova Scotia. 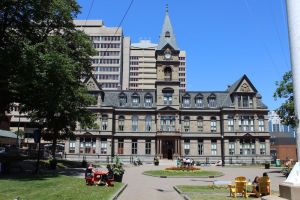 The renovations of City Hall have cost us about twice what I’ve been reporting. The full bill so far is approaching $10 million, reports the Chronicle Herald. And still no accessible entrance:

In addition to technology upgrades, he said a big focus of the upcoming work will be improving the building’s accessibility and security.

But [Terry] Gallagher, [the city’s manager of corporate facility design and construction], said wheelchair users will continue to use the Argyle Street entrance, where people have to press a button and wait for a guard to let them in.

“Even if we tried to make the entry to Grand Parade accessible, through the national building code, they require us to have an entry to the building that is barrier free and as close as possible to parking. The preferred route would continue to be the entry off Argyle Street.”

Nobody wants a ramp at the front of the building. The point is to have a door on Argyle Street that people using wheelchairs can open without having to summon a guard as if they’re common criminals.

“There are no bidders for the latest four deepwater parcels put on the auction block by the Canada-Nova Scotia Offshore Petroleum Board,” the Canadian Press reports. 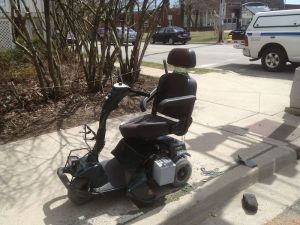 Judy MacIsaac-Davis’ motorized scooter, after she was struck by a pickup truck at Victoria Road and Thistle Street. Photo: Halifax Examiner.

The family of Judy MacIsaac-Davis, the woman killed while crossing Thistle Street in May, has filed suit against the driver, Robert Morris.

I heard Morris’ pickup truck hit MacIsaac-Davis, and came to the scene immediately after, and the memory has disturbed me ever since.

I can’t judge this particular incident, and no matter what happens with the lawsuit, it won’t bring MacIsaac-Davis back to life. But since I walk through the intersection pretty much every day, I know the dynamics of it. Cars barrel up the hill travelling north on Victoria Road, and because there’s no dedicated light, southbound drivers turning left onto Thistle wait for a gap in the traffic and floor it. Pedestrians are often an afterthought in that mix.

1. Those who trade liberty for security

Bruce Wark calls out “the tendentiously garrulous Rex Murphy” for giving us the false choice between civil liberties and public safety. Moreover:

Murphy also resorted to the tried and true journalistic formula of a simple, two-sided conflict: Innocent, law-abiding Canadians versus the terrorist evildoers who threaten their safety. The rational versus the irrational; us versus them.

Lezlie Lowe fouled up the town clock, which might be why the noon gun is screwed up.

Shame on you, Kings Transit, and Pete’s, and Giant Tiger, for sliming the buses with so-called “wrap ads”, even covering the windows. On a recent trip to Kentville, I couldn’t see the pumpkin people, nor the fall foliage. thanks to those super-ugly ads blocking the view. I can tolerate bus ads on the sides, but not on windows. The sooner they are scraped off, the better.

Mysteries of Particles in Air (1:30pm, Chemistry Room 226)—Barbara Finlayson-Pitts, from the University of California-Irvine, will talk on “Mysteries of Particles in Air: Research Challenges and Why We Should Care.” She studies the “chemical and physical processes which play key roles in the natural and polluted atmosphere, from urban to remote areas and from the lower to the upper atmosphere. Understanding these processes requires field measurements, the development, testing and application of models, and laboratory studies of kinetics and mechanisms. Research in our laboratory is directed primarily to elucidating the fundamental kinetics, mechanisms and photochemistry of relevant gaseous reactions as well as heterogeneous processes at the surfaces of, and in, particles.”

The Political Economy of International Relations, Globalization and Development (noon, McNally Main 22)—Walden Bello, the Director of the Bangkok-based Focus on the Global South and a sitting member of the Philippines Congress, and a visiting prof at Saint Mary’s, is talking. 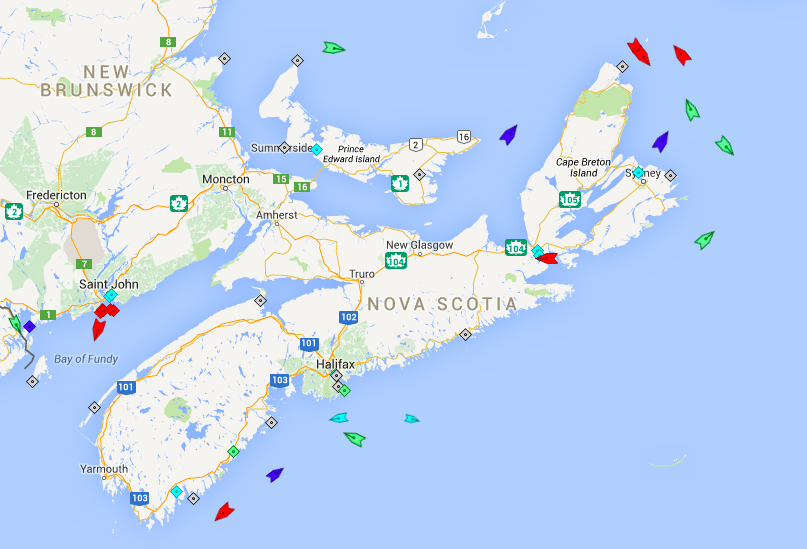 The seas around Nova Scotia, 1am Friday. Map: marinetraffic.com

Somebody should do a story about all the stuff turned into Halifax Transit’s lost and found.