You are here: Home / Featured / My Mother and Tessa Virtue 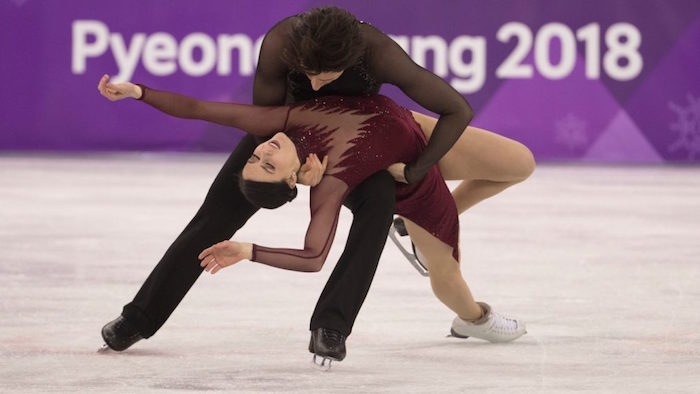 My mother does not do anything stereotypically Canadian. “Why should I pay Tim Hortons to carry around their logo? They should be paying me to advertise them!” she will exclaim, and then proceed to calculate how many cups of coffee she can make from the large can on sale at Superstore versus the cost of buying one cup. Except, she doesn’t even say Tim Hortons, she says something like “Tom whatever it is.”

Two years ago, I convinced her to go through a Tim’s drive thru for the first time. “Look,” I said calculatingly. “99 cent drinks!” Lured by a bargain, she drove up to the drive thru speaker and attempted to get out of the car. “Wind down the window!” I advised. “We want the 99 cent drinks!” she yelled, standing outside the car. “Oh my god, Mummy, it’s called a drive through,” I shrieked from the passenger seat, remembering why we had never done this before.

Bomber games, Jets games, my mother has not so much as watched a single play on TV. On Canada Day, watching the fireworks, she would sniff disdainfully and tell us how her father, making fireworks in a shed in the backyard in Trinidad, conjured artistic displays that far eclipsed whatever the city could muster.

We were the kids who came to school smelling, as our meaner classmates put it, “fresh off the boat” from the spices of her cooking. Fast food was forbidden. Peanut butter she liked only as peanut punch, blended with milk. When she told us she was going grocery shopping and we submitted lists filled hopefully with brand name junk food, she would return with generic versions of something completely different that she insisted was “the same thing.”

The same was true of her purchasing of hygiene products, and my sister and I spent our teenage years mortified by the giant budget pads she would buy that inevitably fell out of our lockers or backpacks. “It’s a wagon wheel,” my sister once tried, avoiding the knowing eyes of her friends.

On Christmas Day, remembering her own years alone as a student abroad, she would invite international students to dinner. Excited to experience a real Canadian Christmas, they would show up only to be met by Trinidadian dishes. After dinner, my mother would force us to play charades, perhaps the most inappropriate game for speakers of English as an extra language.

Fortunately for the students, however, my mother, despite her devotion to the game, insisted on speaking the clues. “It’s a book!” she would yell, and then choose something impossible to mime. “No, the one by Derek Walcott! You know!” she would persist, while we sat, longing for her turn to be over. Following the game, she would lead us in rousing hymns, while the students, baffled, subtly checked their watches.

Pop culture has also passed my mother by. She once referred to “Harry the Potter” at the dinner table, reducing my siblings and me to helpless laughter. I guarantee you if I called my mother right now and asked her who Celine Dion is, she would probably suck her teeth and tell me I devote too much time to nonsense.

Which is why, last summer, I was shocked to hear Mamma Mia by ABBA playing from the study upstairs. There is no way my mother is an ABBA fan, I thought. I went upstairs to investigate.

“Um, what are you up to?” I essayed. My mother turned to me, face alight with happiness. “Oh!” She exclaimed joyfully. “Somebody remixed Scott and Tessa’s free dance from the Olympics to this song! Isn’t it neat?”

My first response was, “How did you learn to use YouTube?” My mother has, in the past, called me up, worried. “You don’t use the face thing do you?” she questioned, and when I said, yes, I do use Facebook, she launched into a report she had heard on CBC. “You can lose your job, you know,” she told me. She has also, predictably, referred to “the tweeter.”

Naturally, then, I was shocked at my mother’s foray into the 21st Century. I was more shocked when, encouraged by my ongoing presence in the study, my mother proceeded to show me montage after montage of Scott and Tessa’s skating career. “Aren’t they cute?” she said, gleefully. “Look at this one, this is their short dance from when they were still juniors.”

Keep in mind, this is the mother who forced me to quit gymnastics in junior high school because it took too many hours away from studying. The same mother who also insisted on me being late to practice because she scheduled violin lessons, deliberately, at the same time, with the intent of preventing the coaches from thinking they owned my time. That the whole team had to do rope climbs to compensate for my absence did not bother her at all.

She also refused, despite our four to five weekly practices, to buy me more than two leotards. “Waste of money,” she declared. “They’re already getting enough out of me. You can wash them between classes.” Being the only brown girl in the gym, it was unsurprising that the other mothers took the sight of me showing up week after week in the same leotard as evidence that we could not afford the appropriate clothing. One day after practice, one of the mothers took me aside, and gently handed me a package filled with leotards with matching scrunchies and barrettes.

I had not assumed, then, that my mother was a lover of the artistic sports.

So to encounter this version of my mother, an obsessive figure skating fan, was jarring to say the least. We didn’t even have a TV growing up. At 16, I purchased an old black and white set at the church garage sale, and eventually, a few years later, my mother bent enough to purchase a coloured set to watch the BBC.

Who was this woman who informed me she had attended Stars on Ice, when she wouldn’t even pay for an iced drink? It turned out that, watching the Olympics, she had fallen in love with ice dance. I tried to imagine her, sitting up night after night, cheering for Canada. What was it this couple had that years of residence in Canada had not been able to accomplish?

Despite a son who served in the Canadian military, my mother had never been a flag waving type. My grandfather, we were told in family legend, once watched the troops marching to war and questioned what they were doing. “We’re marching for King and country!” a soldier replied. “You have a king?” My grandfather riposted. “You have a country?”

What was it that had swept my mother away into patriotism at last?

Was it some long suppressed girlhood fantasy, conceived on a tropical island, of gliding effortlessly along the ice? Was this the endpoint of the books imported from England, spinning tales of rosy cheeks and white winters?

Was she, in her later years of life, simply relaxing enough after a lifetime of labour to appreciate the simple joy of Olympic celebration? Had my endlessly practical mother, who purchased her clothes at the same garage sale I bought that old TV and proudly recounted the moments when the other women at church recognized their cast-offs, discovered a love for the beautiful?

What was it that my mother saw in Tessa Virtue that unbent her, at last, into Canadian fandom?

In October, I called my mother to tell her about the Day of the Girl celebration at Mount Saint Vincent University. I wanted to tell her that I had performed a poem in front of the president of the university. I strategically tell my mother of these forays into respectability in the hopes that one day she will be happy that I became a poet rather than a medical doctor. “Oh yes,” she told me. “I knew it was the Day of the Girl.” I waited, expecting her to tell me there had been a story about it on CBC. Instead, she added, “Tessa Virtue tweeted about it this morning!”

I wish my mother long years of super fandom. I wish her never-ending montages, and remixes of dances, and Stars on Ice galas. Of all the endings to her immigrant story, this is not the one I imagined, but it is one that alternatively confuses and delights me. After years of resolute refusal of anything the average person would enjoy, Tessa Virtue has charmed my mother into Canadianness. Or, at least, into the version of Canada sold as the immigrant dream, where Black women raised on Caribbean islands, flung far from home, sitting in the glow of the TV screen broadcasting from PyeongChang, at last touch that spirit that animates the living rooms of our neighbours, and brings us all together.

Tim Hortons though, they should pay her for that.