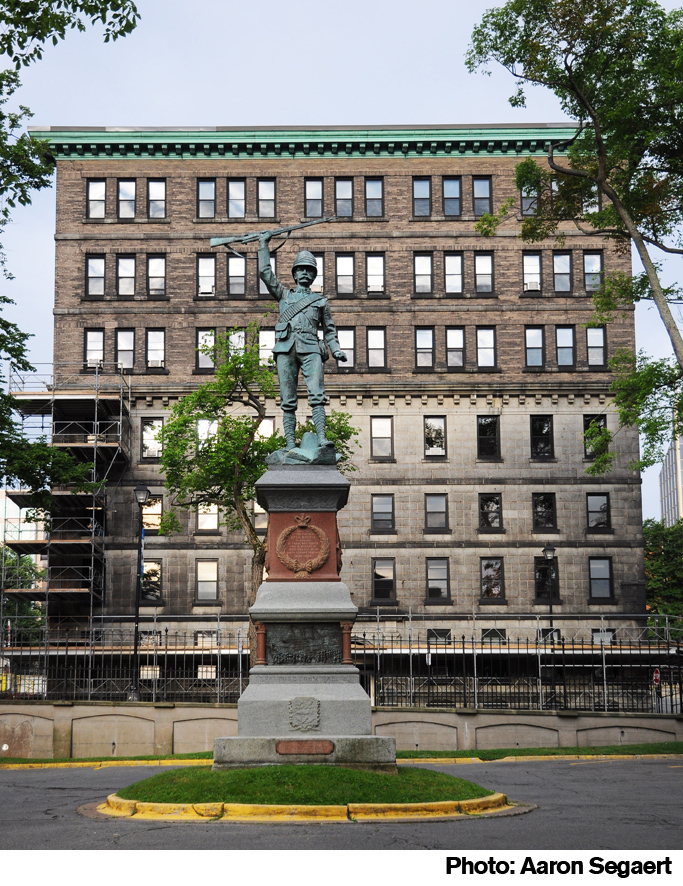 Chronicle Herald reporter Michael Gorman today explores the likely demolition of the historic Dennis building and the possible future of the site. I have no idea if the building is, as minister Labi Kousoulis says, “absolutely useless,” or, as Heritage Trust president Linda Forbes says, salvageable, but we sure are tearing down a lot of historic buildings lately.

That aside, Gorman only briefly mentions the musical buildings game we’re about to play:

[Kousoulis] said the building [to be built at the Dennis site] would likely house government offices. There is uncertainty about the future of the World Trade and Convention Centre, which houses a number of government offices — including Kousoulis’s. If they are forced to relocate, the minister said keeping them downtown is the logical move.

Ah, that “uncertainty” is the rub.

See, the Nova Centre is supposed to be “substantially completed” by January 1, 2016, just 15 months from now. I walked down Argyle Street yesterday, looked at the construction, looked at my smart phone calendar, looked back at the construction…that’s going to be one impressive rush job, I think.

I keep walking by the site because I’m waiting to see if the Argyle side of the project gets above three storeys, all that is needed for the convention centre part of the project—”substantially completed” applies only to the convention centre and hotel (on the Market Street side of the project) parts of Nova Centre and not to the 18-storey office tower part. If construction on Argyle goes above three storeys, then we’ll know that either developer Joe Ramia has secured tenants for the building or is foolishly moving forward without tenants.

No matter what Ramia does, in 2016 the city is required to buy that crappy old WTCC tower above the existing convention centre. The dirty secret that no one besides the Examiner ever admits to is that the province has been subsidizing Trade Centre Limited for decades by renting office space in the WTCC tower. When the city takes the building over, there will be no good reason for the province to keep its offices there, and so they’ll likely move out to better digs, hence Kousoulis’ musings about moving into a Dennis building replacement.

Without provincial tenants, what’s the city going to do with the WTCC tower? The general assumption is that the city will spend four years and a gazillion dollars renovating the building and then in 2020, when its lease on Duke Tower expires, move all the existing Duke Tower city offices across the street to WTCC.

That move, in turn, will leave Duke Tower empty, which probably explains why the Sobeys, who own the Duke Tower-Scotia Square complex, are now embarking on a renovation/reconstruction as a sort of Hail Mary attempt to stay relevant in the soon-to-be flooded commercial office space market.

We may as well throw the Thiels into this mix as well. They are now renovating and expanding the TD Centre on the other side of City Hall and are about to embark on the 22nd Commerce Square project one block down the hill.

This will not end well.

Supporters of medical marijuana had a march to and smoke-in at the police department yesterday. Reporter Hilary Beaumont is writing her account of events; check the Examiner home page for it.

Sigh. “If last year is any indication, we’re about to have a bunch more pedestrians get hit,” I said Thursday. By Friday morning that observation proved correct. The police release:

At 9:31 a.m., police responded to a vehicle/pedestrian collision at the intersection of Robie and South Streets in Halifax. A 22-year-old woman crossing Robie Street in a marked crosswalk was struck by a car turning left from South Street onto Robie Street. She suffered non-life threatening injuries, was treated at the scene by EHS and later attended hospital. A 42-year-old woman was issued a summary offence ticket under section 125(1) of the Motor Vehicle Act for failing to yield to a pedestrian in a crosswalk. This ticket carries a fine of $693.95 and four points on a driver’s license upon conviction

At 9:58 a.m., police responded to a vehicle/pedestrian collision at the intersection of Hawthorne Street and Prince Albert Road in Dartmouth. A 30-year-old woman, pushing a stroller carrying a 1-year-old girl was crossing Hawthorne Street in a marked crosswalk. She was struck by a delivery truck turning right from Hawthorne Street to Prince Albert Road. The woman suffered non-life threatening injuries and was transported to hospital by a family member. The baby girl was not injured. This incident is under investigation at this point and no charges have been laid.

At 10:10 a.m., police responded to a vehicle/pedestrian collision at the intersection of Robie Street and University Avenue in Halifax. A 40-year-old man using a mobility scooter crossing University Avenue in a marked crosswalk, was struck by a car turning left from Robie Street onto University Avenue. He suffered non-life threatening injuries and was transported to hospital by EHS. A 75-year-old man was issued a summary offence ticket under section 125(1) of the Motor Vehicle Act for failing to yield to a pedestrian in a crosswalk. This ticket carries a fine of $693.95 and four points on a driver’s license upon conviction.

Whenever a pedestrian gets hit, even when the driver is ticketed, social media lights up with people talking about how careless pedestrians are. The argument is essentially, “one time some stupid kid was looking at his cell phone and walked right in front of me, therefore a woman pushing a baby carriage walking in the crosswalk with the light deserved to get hit.” I’m sure this morning will be no different.

Ken Hansen, of Dalhousie’s Centre for Foreign Policy Studies, criticizes the government’s decision to decommission the Preserver, Algonquin, Iroquois and Protecteur. “The navy is becoming significantly less capable today because of this decision. The future is a big question mark, because the new ships have even yet to be designed. They’re a long way away from being delivered,” he told the CBC.

Sure, we gotta show off our toys and wave our, er, armaments around because that’s what “real” countries do. But what exactly are we preparing for? Are the Norwegians going to come bomb Halifax? Better to use the human and monetary resources put into armament-waving into something that actually helps people.

The Centre for Law and Democracy has submitted its comments as part of the federal government’s “open government consultation.” Just because it’s so much fun, here’s how they tell the story I related last week:

In this regard, it is worth noting an incident which took place at an Open Government event organised by CLD in Halifax immediately following the government’s OGP 11 September consultation, which was attended by three Treasury Board representatives. The event was meant to be an opportunity for meaningful dialogue between the government and a smaller group of expert stakeholders. Among the participants were two journalists, who were invited by CLD because they are known to be prolific users of the access to information system. As soon as the government representatives learned that there were journalists present, they announced that they would be unable to speak in the session, or respond to any of the points raised or questions asked since, according to Canadian government policy, a media representative would need to be present for them to make any comments “on the record”. The fact that Canada’s open government representatives were unable to discuss the country’s open government strategy without being overseen by a press relations officer speaks volumes about the problems in the government’s approach to openness and why there is scepticism about the government’s commitment to openness. Open government is not about public relations, or presenting a groomed and crafted image to the public of what the government is doing. On the contrary, it is about honest, open relations and information exchanges between government and the people.

I was one of the two reporters. 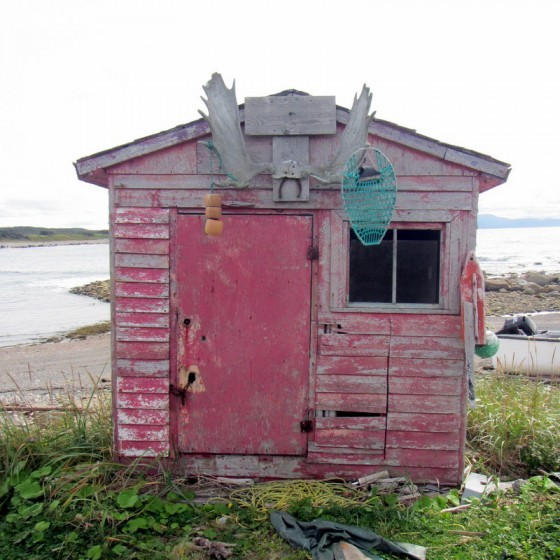 Stephen Archibald notices everything, and takes pictures of it.

Stephen Harper will never be called to testify against Mike Duffy, predicts Dan Leger. That’s because the constitution prohibits the prime minister from being called before the court while parliament is in session, and for 40 days after. Writes Leger:

Prime ministers also decide when parliamentary sessions begin and end, so Harper controls whether or not he appears. While Parliament is in session he doesn’t answer to the court, nor to the prosecutors and certainly not to Mike Duffy.

I’ve speculated in this space that Nova Scotia is now cutting timber at record rates, and today Ralph Surette says we are, and explains why:

Here’s what’s really going on. We’re in a full-fledged wood-fibre panic—not enough wood in our degraded forest to feed the demand, and so the scheme in the Kremlin-like upper reaches of the Department of Natural Resources (DNR) is to, as secretly as possible and without tipping off anybody, not even other interested parties in their own government and operational people in their own department, hand off those Western lands to Northern Pulp and other big operators. When the fibre panic is on, decades of planning driven by citizen participation can go hang, along with ecological sensitivities.

I have no idea what this map is about, but I like it. 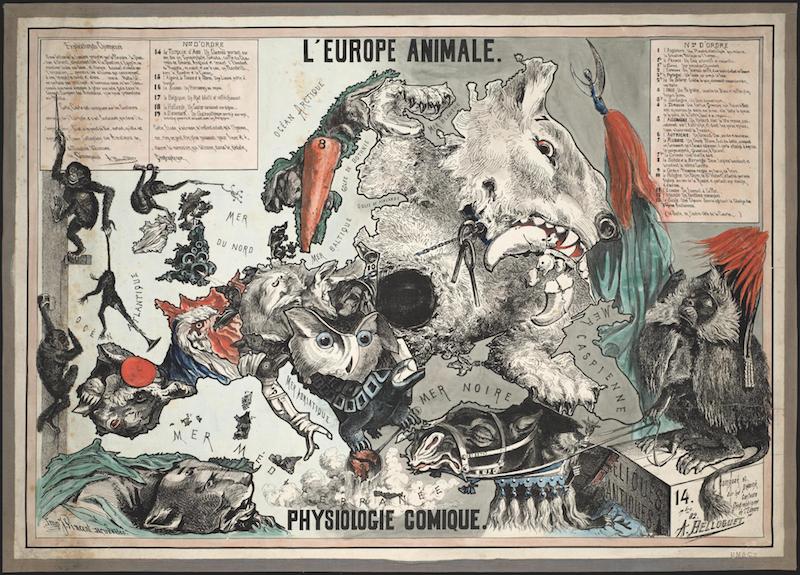 Wait… the Norwegians have warships? And they’re here? We better build a bunch more warships for ourselves, just in case.

The past few days I’ve chronicled cruise ships’ problematic environmental record, norovirus outbreaks, and people gone overboard and otherwise missing. Now we can add child abuse to the list. The Queen Mary 2, in port today, was one of three Cunard line ships Paul Trotter worked on as youth supervisor for four years. In 2012 he admitted to sexually abusing 13 boys under his care on the ships. A few months later, Frommer’s named the three Cunard ships the “Best Cruise Ships for Kids.”

The Queen Mary 2 also was the scene of a bizarre human smuggling plot in 2011. The New York Daily News reported:

The accused smuggler, Fatt Kwee Wong, told agents he was paid $3,000 for each of the nine passengers by an unidentified person in China. The illegal immigrants also forked over $500 each when they boarded the ship in Dubai, according to court papers.

The illegal immigrants were not stowaways—their names appeared on the boat’s manifest—and they had access to the ship’s spectacular amenities. The QM2 boasts a Canyon Ranch spa, Royal Court Theater, planetarium, gourmet restaurants and the “largest ballroom at sea,” according to the Cunard website.

Wong carried a Japanese passport and aroused suspicion at the immigration checkpoint when he was stumped when asked the names of his nine companions.

It appears that Cunard failed to conduct even basic passport and criminal record checks of its passengers.

Morning File takes Sundays off, so we’ll see you Monday.