You are here: Home / Featured / Murderer escaped Portapique within 10 minutes of police arriving 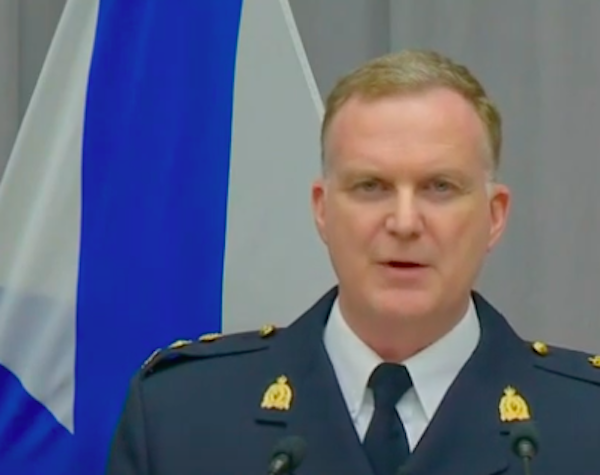 RCMP Support Services Officer Darren Campbell provided an update today on the investigation into the April 18-19 massacre across Nova Scotia.

• 435 witnesses have been identified, and about half of them have been interviewed;

• it’s not known if anyone assisted the murderer, who we’re calling “GW,” in planning or preparing for the attacks;

• GW was wearing authentic RCMP slacks and a shirt; it’s not known where or how he obtained them;

• GW has two relatives who are retired RCMP officers; both have been interviewed, and it’s not believed either is involved in the crimes;

• GW did not hide his replica RCMP police cruisers from the public, but so far the investigation does not show that any police officers knew of them; the cruiser that was used in the killing spree was purchased (probably at an auction) last fall;

• GW seems not to have lived at his residence and shop on Portland Street for some time, but rather lived “primarily” in Portapique;

• police believe that the first fire in Portapique was GW’s own house, and may have started as a result of ammunition he had stored there catching fire; Campbell did not say how the other fires started;

• the first victim was GW’s “common law spouse,” who was injured but survived; it is not clear what the status of their relationship was on April 18, or if she was living at GW’s house or another house nearby; she is speaking with police;

• besides his common law spouse, Campbell said GW did not single out women particularly, even though most victims were women.

The update also filled in some of the missing pieces of the timeline the Examiner published Saturday morning, “13 hours of terror: tracking a mass murderer’s rampage through Nova Scotia.”

One question we had was when GW left Portapique and where he went before we could next determine his location at 6:29am on Hunter Road north of Wentworth.

We now know GW left Portapique at 10:35pm, just after the first police came to the community at 10:26pm. GW left the hamlet by driving his replica RCMP cruiser “through a field” while police were engaged with finding victims, and dealing with fires in the community.

An RCMP map of GW’s journey from Portapique to 123 Ventura Drive in Debert.

According to a graphic shown at the RCMP briefing, GW travelled east on Highway 2, then north on Station Road, crossed Highway 104 to East Village Road, then crossed Highway 4 to Plains Road, and was next captured on video at 11:12pm entering an industrial area on Ventura Drive, between the Debert Diefenbunker and the Debert Military Museum on Plains Road, a distance of 26 kilometres from the crime scene in Portapique. The graphic names the exact location as 123 Ventura Drive. Campbell said that GW stayed in the industrial area through the evening, next seen leaving at 5:43am. “We’ve searched that area thoroughly,” said Campbell but police have found nothing.

An RCMP map shows GW’s route from 123 Ventura Drive in Debert to 2328 Hunter Road, Wentworth. Insets of still images taken from different videos show GW’s replica police car at 5:43am in Debert and passing a driveway on Hunter Road in Wentworth at 6:29am.

Next, GW travelled northbound on Highway 4, going 44 kilometres to the Wentworth area.

Campbell confirmed today that GW entered Hunter Road at 6:29am and left again at 9:23am, information the Halifax Examiner first published Saturday afternoon (see “The killer was on Hunter Road for nearly three hours“). While on Hunter Road, he killed Alanna Jenkins and Sean McLeod, as well as neighbour and retired firefighter Tom Bagley, who appears to have come to the Jenkins/McLeod property in response to it being on fire. Campbell confirms that GW knew Jenkins and McLeod.

There have been rumours that GW had been spotted in at least four places in northern Nova Scotia. The Halifax Examiner looked into those rumours and we either discounted them as improbable, or have not yet found enough evidence to verify the rumours. The filled-in timeline now makes it very unlikely that GW was anywhere else beyond the locations we’ve previously reported.

Campbell said GW travelled 14.5 kilometres south, and killed Lillian Hyslop near the entrance to the Wentworth Provincial Park, which we reported happened at about 9:30am.

Campbell then cleared up his confusion about the location of the house of the motorcycle enthusiasts GW visited on Highway 4, placing it near the 2900 block in Debert, just north of the intersection with Highway 104. GW stopped there at 9:48am. The couple hid under their bed and called police, and GW left without harming them.

From there, GW went back in a northerly direction on Highway 4, past the Hidden Hilltop Campground, and turned right on Plains Road, towards the industrial area he had spent the night in. But he passed that area, and then seems to have “pulled over” and murdered nurses Kristen Beaton and Heather O’Brien about 200 metres apart from each other near 1760 Plains Road.

An RCMP map shows GW’s route from Debert and through Truro.

Next, GW is captured on video at 10:16am, 10:17am, and 10:20am at several locations in Truro, but he doesn’t seem to have stopped in Truro. He then travelled south seven kilometres on Highway 2 to Millbrook, where he was captured at 10:25am at the Millbrook Trading Post, where he took his sweater off. (The time stamp on the video reads 10:55; this is incorrect.)

Campbell said GW was next seen at 10:32am in Brookfield (we had placed that at 10:34am). He then continued on Highway 2 for 22 kilmetres to the intersection of Highway 224, where he shot and wounded Cst. Chad Morrison at 10:49am, and then “within a few minutes” Cst. Heidi Stevenson “engaged” GW, and was killed by him.

Today, Campbell failed to mention that Joey Webber came upon the scene and was killed by GW, and that GW took the silver SUV Webber was driving.

An RCMP map shows GW’s route on Highway 224 but omits the location of Gina Goulet’s house. The inset photos show the clothes GW had left behind near or at Goulet’s house, including RCMP uniform pants and an RCMP patch.

GW next drove Webber’s SUV down Highway 224 to Gina Goulet’s house, killed her, and took her red Mazda 3. Campbell incorrectly said GW then travelled 22 kilometres down Highway 224 towards Enfield, but the map accompanying him clearly shows the route taken as Highway 102. GW left the highway at 11:23am to stop at the Big Stop for gas, where an officer also gassing up saw GW and killed him.

This article has been updated with the RCMP graphics.