A series of virtual information sessions for seniors, hosted by professionals from Nova Scotia’s Black community, was inspired by a mother-and-daughter duo who wanted to support BLM protests and fight racism in the province.

The Valley Anti-Racism Association was founded by mother and daughter Sharmay Beals-Wentzell and Shartelle Lyon, who said the group was inspired by the tragic murder of George Floyd last year.

“After that, Mom called me and said that she wanted to do something to support the BLM protests that were coming up all over the world,” said Lyon in an interview on Tuesday. “So, we put one together in Windsor/West-Hants area (…) after that we really felt like we could use the momentum to drive some good in the community, so we co-founded the Valley Anti-Racism Association.”

Two months after the protest, the two appeared on the evening news after racist graffiti had been discovered on road signs leading into Windsor.

“There are lots of people who would want to write this off as ‘Oh, it’s just kids being kids’ or such things. But, the problem with that mentality is that when you’re a teenager, yes you’re still a child, but you’re also not … you’re not an infant. You’re old enough to know the difference between what’s right and what’s wrong,” Lyon said.

She continued: “And the problem with trying to pass it off as ‘It’s just kids being kids,’ on top of that is that those kids then grow up to work in places where that mentality then permeates to the rest of what they’re doing. So they will grow up to become, you know, racist doctors, racist teachers, racist lawyers, racist police officers. And if we can stop people from being racist initially then that kind of thing won’t permeate to the rest of society.”

As word spread about the Valley Anti-Racism Association, Lyon said they were contacted by Andrea Parker from Nova Scotia Health.

“She wanted to reach out initially because she wanted to speak with us about our work and to find out how she could be helpful, and then other people started to connect with her in hopes of connecting with us. So, the Seniors Empowerment Sessions were one of those things that came out of those connections,” Lyon said.

Parker then connected them with Peri Lockhart from Injury Free Nova Scotia and Karen Crowe from West Hants Senior Safety. The three groups then had series of meetings in September 2020.

“We tried to find a kind of cross point for where our anti-racism work, Peri’s injury-free work, and Karen’s senior work could kind of intersect so that we could work on a collaborative project,” Lyon said. “And then the Senior Empowerment Sessions is what came out of that.” 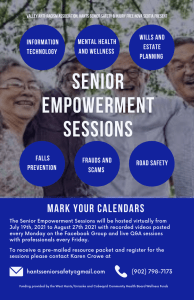 “We wanted to make sure all of our hosts were people of colour. So, we made sure in our process, in our search, that we were only targeting people of colour so that we could provide that anti-racist standpoint (…) Not to say there aren’t Black professionals because there obviously are. It’s just nine times out of 10 if you go to speak to somebody you’re not going to speak to a Black person or an Indigenous person or a person of colour.”

Lyon’s mother, Sharmay Beals-Wentzell, says she’s proud of her and her daughter’s work.

“We are becoming a force to be reckoned with,” she said.

When speaking about her daughter Shartelle’s efforts, she said ““I’m not surprised. I always had faith in her and how strong she is. And after we did the Black Lives Matter march, she has become stronger. And she’s now becoming confident in herself and believing in herself that she can achieve many things out there. And so I’ve always told her ‘Believe in yourself because if you don’t believe in yourself, who’s gonna believe in you?’”

A total of six informational videos are scheduled for release each Monday on Facebook. Each video includes a link to a follow-up Q&A session on Zoom scheduled for later in the week, Fridays at 3pm.