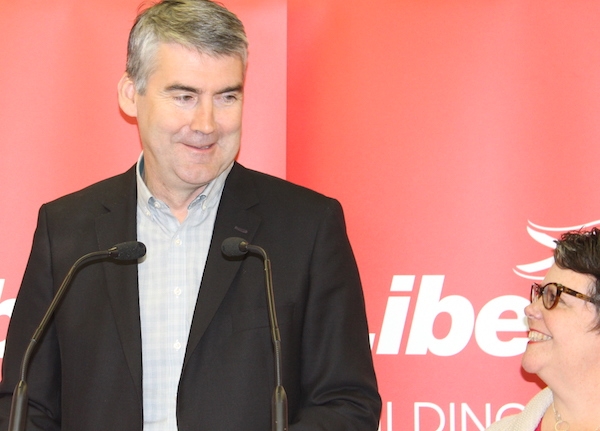 It was a nail-biter of an election. When I went to bed at half past midnight, the CBC was projecting a Liberal victory two seats short of a majority, but an hour later that had flipped to a two-seat Liberal majority. Points to note:

• Liberal support is most solid in Mainland rural areas. The party also did well in suburban HRM, and Labi Kousoulis kept his seat in Halifax Citadel – Sable Island. (Does the district name really have to include the residence of one voter? Does Zoe Lucas even vote? She seems uninterested in non-horse related affairs. And did any candidate knock on Lucas’s door?)

• the Liberals lost three seats  on Cape Breton Island, retaining only Glace Bay and Sydney-Whitney Pier. The NDP took Cape Breton Centre, while the PCs hold the other four seats on the island.

• despite lower-than-expected total vote counts, the NDP did better than expected on the seat count front, increasing from five to seven. Importantly, Leader Gary Burrill won in Halifax Chebucto, which will finally give him a presence on the floor of Province House. Another big NDP victory was in Dartmouth North, where Susan Leblanc defeated Liberal cabinet minister Joanne Bernard.

• Brad Johns is in the legislature. Just think about that for a while. Maybe he’ll bring his talking Christmas tree.

In his book Reflections of a Siamese Twin, John Ralston Saul makes the point that the voters collectively sometimes make a wiser statement than any individual voter. Saul was speaking of the Quebec referendum, where the razor-thin “no” vote served to frustrate all politicians and pundits who wanted a clear and decisive takeaway; as Saul tells it, by not decisively defeating the independence movement, Quebeckers sent a message that they while they weren’t ready to separate, they weren’t satisfied with the status quo either. This forced a new political deal, one that no one was speaking of before the referendum.

I don’t know what the collective zeitgeist is telling us in Nova Scotia, but I think it leaves everyone a little unsatisfied. The Liberals maintain their majority, but not with the convincing mandate from 2013. The PCs scored big, but not by enough to threaten a deal with the NDP. The NDP weren’t pushed off the stage entirely, but they’re still a long way from being a real electoral threat outside the urban areas.

Basically, the voters kicked the can down the road a bit.

Had the Liberal majority been just one seat, I think we would’ve seen someone cross the floor within a year or so. Two seats makes deal-making more complicated, and will probably have to wait until after a byelection changes the electoral makeup, assuming it does. Otherwise, it will take a major scandal or an unexpected political event to break the Liberal stronghold; either is possible, if unlikely. Most likely, the Liberals will keep government for four years. 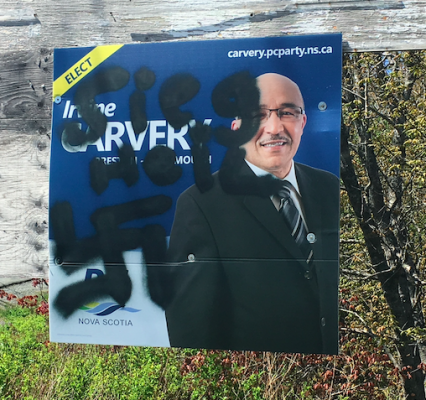 Some asshole scrawled racist graffiti on the campaign signs erected just at the entrance of North Preston, at the corner of Lake Major and Johnson Roads.

The PC sign had “Sieg Heil” and a swastika on it. The Liberal sign had “1488,” a white supremacist reference. And the NDP sign had a monkey drawn on it.

I happened to be in Cole Harbour when I heard about the graffiti so drove up to have a look. Right as I arrived, two Liberal campaign workers were taking down the Liberal sign, explaining that it was illegal for them to even touch the other parties’ signs. But they said that the PCs and NDP knew about the graffiti and were on their way to remove the signs as well.

On Election Day morning, scores of people were reporting problems with the “Where and When Can I Vote?” web tool on the Elections Nova Scotia website. Some people put in their address, only to be kicked back to the main page with no results, while others were given incorrect polling information.

Around noon, Elections NS posted that “the tool is housed on a government-based server and IT personnel in government and Elections Nova Scotia are working to resolve the issue.” It appears to have been fixed by mid-afternoon, but that of course would be far too late for voters who had work and other responsibilities to attend to.

The web tool was a major screw-up and entirely unacceptable. The department had four years to plan for the election and evidently didn’t put the resources required into it. Such tools regularly work as designed in much more populous provinces. There’s simply no excuse for this. 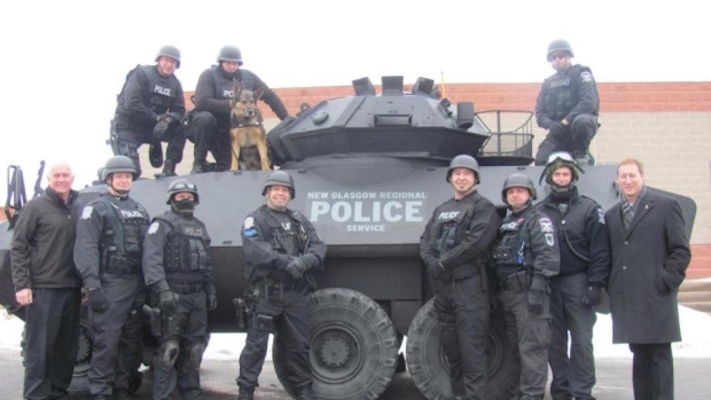 New Glasgow is trying to get rid of its tank, reports Preston Mulligan for the CBC.

Mulligan reminds us that “[t]he New Glasgow police department acquired the Cougar back in 2013, when former Conservative MP Peter MacKay was serving as national defence minister.”

Turns out, however, that the tank is hard to drive, expensive to maintain, and kind of pointless from a logistical standpoint. Moreover, it’s really bad PR:

Plus, having the imposing vehicle in the small town is worrisome for residents “in the sense that it sort of seems somewhat of a militarized kind of piece of equipment,” [Mayor Nancy] Dicks added.

So what’s going to happen with the tank? The Halifax PD is talking about taking it. Oh joy. 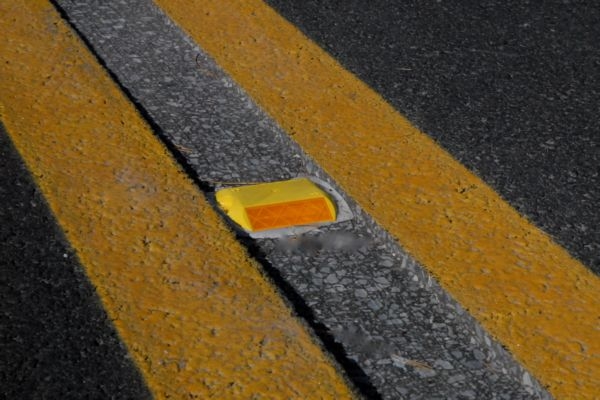 Examiner transportation columnist Erica Butler reviews transportation studies that suggest small-dollar safety improvements to the province’s highways that don’t involve twinning. Butler isn’t arguing that the highways shouldn’t be twinned, but rather these cheap fixes can be implemented quickly — within a year or two — while even on the quickest timeline, twinning will take a decade or more, and won’t address the majority of highways in any case.

I pushed Butler a bit on the recessed reflectors — they’re recommended in the studies, but not as enthusiastically as I would like. I contrast two experiences.

The first is driving the 102 from Truro to Dartmouth in the rain at night. The roadway is a complete mystery. I can’t find the lanes most of the time, and when I’m not following behind another vehicle or trying to find the white line on the right side of the road, I’m just phoning it in.  I’m sure I’m careening back and forth over the unseen white lines, and I worry I’m going to stray right off the road. It’s stressful as can be.

The second is driving in California, especially over the mountain passes. These used to be just as bad as the 102, but with more curves and blind crests. But about five years ago the highway department installed the recessed reflectors (they’re recessed so snow plows won’t take them out), and the difference is like night and day. The mountain passes are now a stress-free joy to drive, the lanes clearly delineated. I’ve never seen such a dramatic improvement in driving conditions.

Simulation modelling in biology is about asking “what if?” questions. In this talk, I will describe how my colleagues and I have been using an Agent-Based Model to explore “what if?” alternatives on Atlantic salmon farms. Atlantic salmon farming is the largest aquaculture industry in the world, worth over $14 billion annually. However, one of the biggest problems facing salmon farms is infestation by sea lice. These parasites cause substantial damage to the farmed fish, and potentially to wild salmon in the area. To add to the problem, sea lice populations in most areas around the world have evolved some level of resistance to common treatment chemicals. Our work focuses on exploring influences on sea louse resistance evolution. First, I will describe salmon aquaculture and our model with more enthusiasm and detail than seems warranted. Second, I will talk about our past projects exploring some alternatives in environment and management and their effects on sea l! ouse resistance evolution. Third, I will discuss our current work on extending and calibrating the model. I will finish with some thoughts about how the model could find a place in a wider use context.