You are here: Home / Featured / More Photos of Buildings and Food

1. Northern Pulp and us 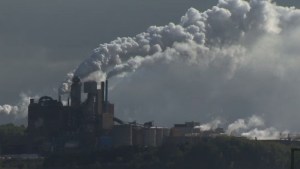 The Chronicle Herald begins a four-part series by Aaron Beswick on Northern Pulp today. The series looks at “what a permanent closure of the Northern Pulp mill would mean for government and taxpayers, Pictou County’s business community, the Northumberland Strait’s ecosystem and the province’s forest industry.” In part one, Beswick reviews some of the history of money the province has lent or given the mill’s owners (spoiler alert: the province is not exactly forthcoming with figures) and the contracts involved.

If you’re an Examiner reader, you’ll know this site has covered Northern Pulp’s environmental impacts and the various forms of taxpayer largesse the mill has received in considerable detail, including here, here, here, and here.

One of the maddening threads running through Beswick’s story is (no surprise here) all the secrecy involved. How much money has the province loaned the company? How much are we on the hook for when it comes to environmental cleanup costs? Who knows?

2. First we let them burn tires 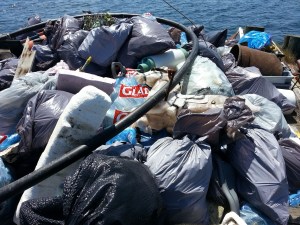 A pile of garbage collected from the shores of McNabs Island in the annual shoreline cleanup back in 2014.

Both CBC and Halifax Today have stories about new rules allowing for “thermal disposal” of waste, including plastic and newsprint. I’ve read the stories and tried reading up on thermal disposal, and I still can’t tell you exactly what it is — but it’s definitely, absolutely, not the same thing as incineration apparently. 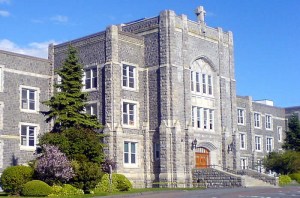 Back in October, members of the Saint Mary’s University Faculty Union, which represents faculty and professional librarians, voted overwhelmingly in favour of a strike. A release from the union said 80 percent of members voted yes. The main issues were money and workload. The union was certified 44 years ago and members have never been on strike.

And they aren’t walking out now either.

I’m pleased to announce that the University has reached a tentative agreement with the Saint Mary’s University Faculty Union on contract negotiations. Further details will be forthcoming. In the meantime, we express our gratitude to both bargaining teams for their thoughtful work.”

Congrats to both sides. The deal means we are spared a round of media pieces worrying that students might lose their year if the strike goes on long enough — even though, as far as I know, this has never actually happened in Canada. 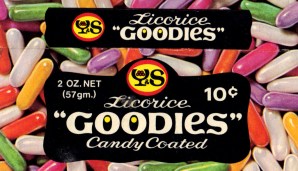 The province is making a tiny step towards improving dental care for kids.

Taryn Grant reports for Star-Metro Halifax that the province will now provide annual preventative fluoride treatment for kids, along with molar sealants (these are plastic coatings that prevent food from getting stuck in some teeth and causing cavities).

Until now, only kids who already had cavities were eligible for the fluoride treatment.

One of the books I am really looking forward to reading this year is Teeth: The Story of Beauty, Inequality, and the Struggle for Oral Health in America, by Mary Otto.

1. Food inspections and the shutdown 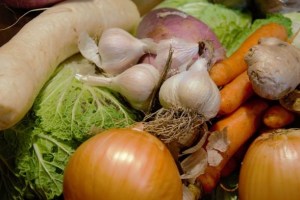 Dal prof and frequent media commentator Sylvain Charlebois has an opinion piece in today’s Chronicle Herald on how the US federal government shutdown could affect food safety in Canada.

Because of the shutdown, the FDA has suspended “routine safety inspections,” Charlebois says. But individual inspections are not the main issue.

“When it comes to food safety, most of us tend to zero in on the number of inspections as a performance metric…. In food safety, things are more complicated than that. The current gridlock in the U.S. is affecting a fundamental aspect of food safety governance.

Food safety regulators are likely unable to verify and validate data or to offer a systemic view on trends and potential threats to food industry.”

Nearly half of Canada’s imported fruit and more than 60 percent of our imported vegetables come from the US.

I recently spent a week in Manhattan’s Financial District. (No, I am not a finance guy;  I was there as part of the degree requirements for the MFA in creative non-fiction I’m doing at King’s.)

I am originally from Montreal, but I’ve lived in Nova Scotia long enough, that certain things make me feel like a hick when I’m in a big city.

In New York, one of those things was quaintly saying “for here” when I ordered a meal or coffee at most places. Why? Because whether it’s for here or to go, everything is going straight into the garbage when you’re done. The lone Starbucks I went to had some proper mugs on a shelf, but they were just for display. My drink came in a throw-away cup, even though it was “for here.”

Hand-ripped noodles with cumin lamb. Rice salad with meat and veggies. Taiwanese steamed buns and fried noodles. A full-size bento meal served in a solidly constructed six-section tray. All meals in which every single item went straight into the garbage. (The bento place also served soup and had several signs exhorting people not to throw out their black spoons.)

And don’t talk to me about recycling. There, like here, every single set of recycling/garbage bins was a piled-up confusing mess. I think I generated more garbage in a single week than I do in a month at home.

I looked at all this–at the piles of garbage on the narrow streets every night, the thrown-out Christmas trees festooned with coffee cups people had tossed into their branches, the thick cardboard bowls and trays, and the sturdy plastic lids all going into the garbage after every meal — and I thought, really? The problem is straws?

Newfangled Rounds: ESCF as an Enabler of Ideas to Products to Exit: Experiences from Panag Pharma (Thursday, 8:30am, Bethune Ballroom, Bethune Building, VG) — from the listing:

Panag Pharma is focused on development of a new generation of pain management therapeutics based on exploiting the endocannabinoid system. Join us to learn about Panag and how Innovacorp’s ESCF grants have supported their evolution.

Andrew Downs’ Zoological Gardens opened in Halifax, Nova Scotia, at the edge of town in 1847. They stretched over one hundred acres in the area adjacent to what is now known as the Armdale Roundabout, and for more than 20 years, housed regional and exotic animals in sprawling wooded enclosures. The proprietor, known to care deeply for the animals in his keep, was also a master taxidermist, supplying specimens to the world’s leading scientific institutions of the time. Downs’ Gardens were the first public zoo dedicated to the study of nature in North America, and yet, these gardens also signalled the broken bridge between colonial settlers and the natural world, becoming a “living museum” of wildlife in a patch of forest just off the Halifax Peninsula.

The Memorialist — a term with which Downs self-identified in his practice —departs from this story, following the undercurrents of colonialism that permeate Western Culture’s understanding of nature, while retracing the complex geography of care and harm that characterized nineteenth century efforts to collect and preserve natural specimens (and occasionally their habitat) under the context of an expanding dominion. In this installation of her ongoing research driven project, D’Arcy Wilson presents a combination of still photography, video projections, a 14-ft diorama, a selection of museum and archival objects, and performances that tease out the contradictions at play behind the preservationist impulse and the museological framing of the natural world. 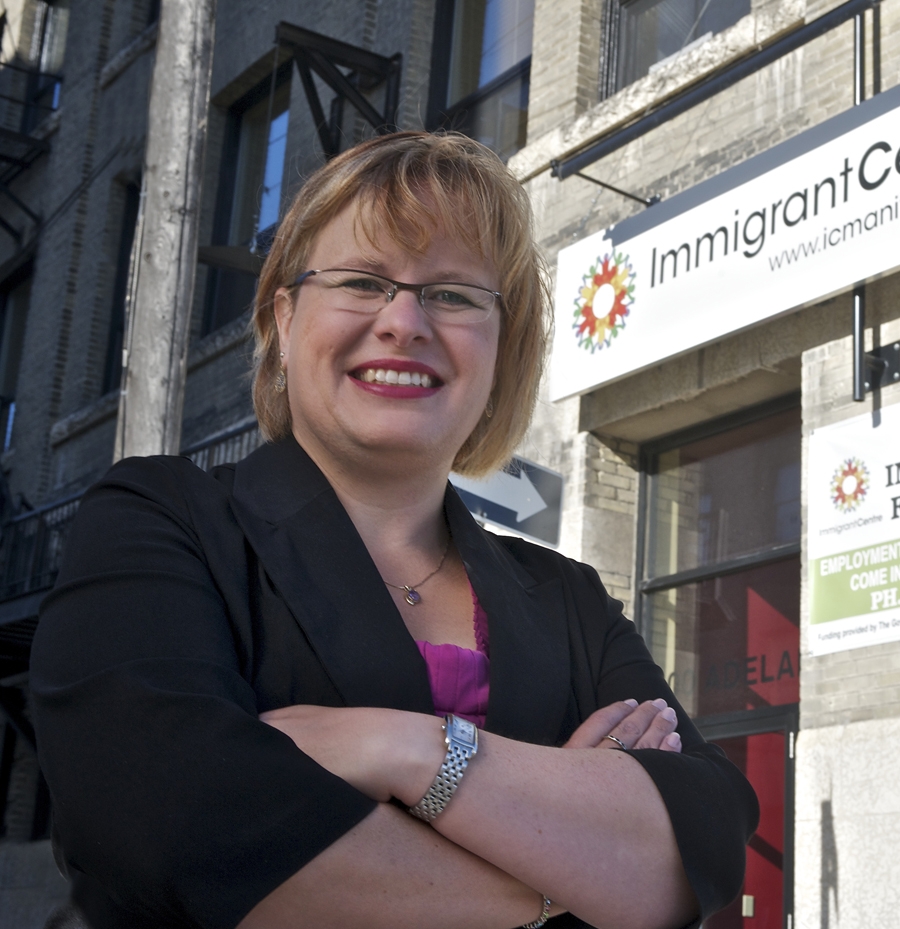 Starting Over: An Examination of the Resettlement Experiences of Yazidi Refugees in Canada (Friday, 12pm, MM227) — Lori Wilkinson from the University of Manitoba will speak. From the listing:

Over half the Yazidi arriving to Canada in 2017 are single-female headed households. Trauma is, unfortunately, a common occurrence for the Yazidi; almost all of them have immediate family members who have experienced sexual assault, kidnapping, and murder. As a group, they have also been exposed to inter-generational trauma. In addition to the 2014 genocide in Sinjar Iraq, the Yazidi have survived 73 other genocides over the past 1200 years.

This presentation provides a brief overview of the results of a qualitative study of 35 Yazidi refugees living in Toronto, London, Winnipeg and Calgary. Focus topics include pre-arrival orientation, reception centre experiences, housing needs, language classes, and settlement service use. Initial observations indicate that the low level of educational attainment, lack of English knowledge, together with coping with traumatic experiences, will have an influence on various aspects of the integration of Yazidi refugees. Despite the challenges they face, the Yazidi in Canada and worldwide are working to create new structures that will facilitate the future growth and health of their community. The presentation ends with some recommendations for changes to the resettlement program in Canada that will benefit not only the Yazidi, but other refugees and newcomers.

The rise of the Chinese dragon: Thoughts on doing business with the People’s Republic of China (Friday, 2pm, Keshen-Goodman Library) — Michael Whalen will speak. 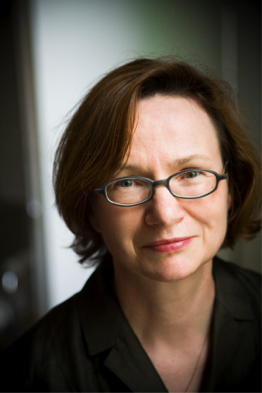 Patriarchy as Tyranny in Seventeenth-Century Venice (Friday, 7:30pm, KTS Lecture Hall) — Marguerite Deslauriers from McGill University presents the keynote lecture of the 7th Annual Conference of the Early Modern. A reception will follow in the Senior Common Room.

Back before Christmas, playwright Hannah Moscovitch (we are not related, though I have written about her) wrote a couple of tweets about buying theatre tickets online.

For the most part, these sites are truly awful. I originally wrote a blow-by-blow (complete with screenshots) walk-through of buying tickets from a couple of different local theatres, but I felt it would single them out unnecessarily when so many of them are so bad: Unnecessarily confusing, asking for info they don’t really need, making all kinds of marketing questions mandatory fields, refusing to let you list only a cell number… and all while the little clock is ticking down to the time your tickets will vanish from your cart.

I’ve had terrible online ticket-buying experiences on the sites of venues in New York, Toronto, Montreal, and Halifax, so it’s not a question of the locals falling short.

I know money is tight for arts organizations, and money spent on the website is money not spent on productions, marketing, and so on. But at a certain point it’s time to just make it easier for people to buy tickets.

Here is a song from More Songs About Buildings and Food by Talking Heads.