Yesterday, I castigated as “craven fools” the five Liberals on the Public Accounts Committee — Gordon Wilson, Suzanne Lohnes-Croft, Ben Jessome, Brendan Maguire, and Hugh MacKay — for their spinelessness in limiting debate at the committee in order to (they think) gain a short-term PR advantage of controlling the public message.

What brought this up was the desire by opposition MLAs to discuss health-related items. “The PCs had wanted to discuss the ‘mental-health crisis in Cape Breton,’ while the NDP had sought to add ‘family doctor resourcing’ and ‘managing home-care support contracts’ to a future agenda,” reported Michael Gorman for the CBC.

As I noted, such discussion is entirely within the terms of reference for the Public Accounts Committee, but Liberal MLA Ben Jessome used the excuse that those health issues were to be taken up by the newly created Health Committee. “Having the Department of Health into this [Public Accounts] committee would be counter to the way that we’re looking to proceed with this committee,” Jessome said, reported Gorman. “The Department of Health should report to the standing committee on health.”

But let’s follow that logic, such as it is.

Jim Vibert comments for Saltwire on the Health Committee:

Stick a fork in it, folks. It’s done.

“It” is the Nova Scotia legislature’s health committee. It is a ruse, a ploy, a gimmick, a cruel hoax perpetrated on Nova Scotians by a Liberal government desperate to show concern for health care, but unwilling to permit a discouraging word on the subject.

The Liberals clearly recognize that they are politically vulnerable on health care. Their strategy to manage the liability is to stifle all discussion that might cast the government in an unfavourable light.

That’s getting dangerously close to stifling all debate save the utterly banal.

This week, the Liberal majority refused to allow doctors to come before the health committee to talk about physicians’ working conditions. In case it’s escaped your notice — as the government hopes it has — there are a bunch of unhappy docs out there.

So, excuse the repetition, but the Nova Scotia legislature has a standing committee on health that won’t hear what doctors have to say.

Nor will it hear from paramedics. Ambulances are in short supply because they’re lined up waiting to offload patients at overcrowded emergency rooms. But the Liberals defeated a motion to discuss emergency health services at the committee.

It is a safe bet that the real problems in health care and the topics the Liberals plan to block from committee consideration are the same list.

I wouldn’t care so much if it was just Brendan Maguire hiding behind his happily banal Facebook page to avoid talking about real issues, but these craven fools are undermining the very institutions of our democracy.

Have they no shame?

The release didn’t give any details, but a subsequent email had the subject line “2 Vehicle MVC with single fatality,” again with no details.

Police have charged the driver in pedestrian/vehicle collision that occurred yesterday in Dartmouth.

At approximately 6 p.m. last [Wednesday] evening officers responded to a report of a pedestrian/vehicle collision that had occurred at the intersection of Thistle Street and Victoria Road in Dartmouth. A pickup truck that was in the northbound lanes of Victoria Road turned onto Thistle Street striking a 76-year-old woman who was attempting to cross Thistle Street in a marked crosswalk.

The pedestrian was taken to hospital by ambulance for non-life-threatening-injuries. The driver, a 29-year-old Dartmouth woman, was charged for failing to yield to a pedestrian in a crosswalk and failing to provide proof of valid insurance. The driver is scheduled to appear in Dartmouth Provincial Court at a later date to face the charges.

So a pedestrian did everything “right” — she presumably pressed the beg button (else she would’ve been charged), walked with the light in a marked crosswalk. And the driver failed to yield and couldn’t produce proof of insurance. Why then does the police release continue with safety advice aimed primarily at pedestrians?:

Police would like to remind pedestrians and motorists that we all have a role in keeping each other safe on our roads. Some helpful reminders for intersection safety are listed below:

And what if, as is typical, all drivers refuse to engage my searching eyes? Can I never cross the street? I don’t have Paul McLeod’s alluring marble eyes, but even with my dead orbs, I try not to be menacing; still, drivers appear more interested in eyeballing the next break in traffic than sparking a momentary tête-à-tête with the lowly pedestrian. 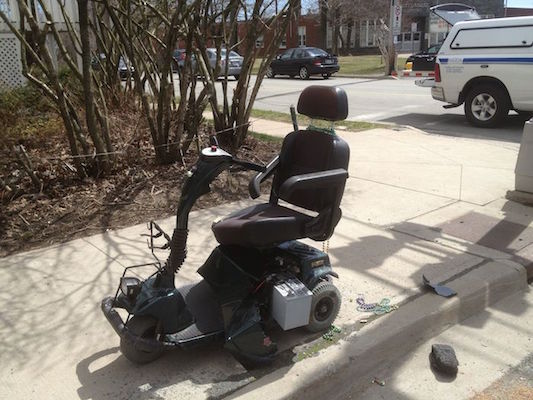 Judy MacIsaac-Davis’ motorized scooter, after she was struck by a pickup truck. Photo: Halifax Examiner

The intersection of Victoria Road and Thistle Street is deadly. This is probably the busiest pedestrian intersection in Dartmouth, with hundreds of students at two schools on either corner, and thousands more pedestrians walking to and from the Bridge Terminal each day.

I walk through the intersection probably a dozen times a week, and each time I think about Judy MacIsaac-Davis, the woman who was killed while crossing the intersection in her motorized scooter. Other pedestrians are struck with such alarming regularity that neighbours have blankets at the ready to comfort people lying in the roadway while awaiting the paramedics. I myself have had too many close calls to count.

Major changes need to be made to the intersection.

I would start by eliminating right turns on red for the entire day; there are just too many pedestrians present to risk the increased danger from giving momentary time savings to drivers. And given the number of pedestrians, this is an ideal intersection for Leading Pedestrian Intervals — walk lights that give the pedestrian a head start to cross before drivers can move.

There are also visual impediments at the intersection: drivers travelling west on Thistle Street and blindly whipping around the corner to go north on Victoria Road are a particular hazard, because there’s a light pole right there that blocks drivers’ views.

Honestly, if we took property from the schools, there’s enough room at the intersection to build a roundabout, but maybe that’s too complex and too controversial.

Hutchinson said several vehicles “were put off or on the side of the road.”

Eventually, police say, the truck took an exit off the highway and onto the Beaver Bank Connector. It then travelled through the intersection that connects to Sackville Dr. and “drove directly into the parking lot and into the Irving Mainway,” according to Hutchinson.

“We are very fortunate with this one,” Hutchinson said, explaining how the situation ended. “(It) drove directly (past) the gas pumps and into the business.”

Two people were injured, including the driver of the truck. Hutchinson said the injuries weren’t life-threatening. He didn’t know if the second person hurt was an employee or a customer.

Amanda Debison and Ryan Van Horne have more for CTV:

It was a culmination of an incident that began earlier near Windsor when black Jaguar was reported driving on the wrong side of Highway 101.

Jason McLellan of Bramber, Hants Co., was heading home after work when he came upon the aftermath of a multi-vehicle accident.

He said he slowed down to proceed through scene and notice there were no emergency vehicles there yet, and the black Jaguar was in the media [sic] and severely damaged.

“At the same time a guy ran from beside the car and ran toward my lane,” McLellan said. … “I saw that he was holding a machete and he walked toward two trucks parked on the side of the road.”

“The guy ordered him out of the truck, jumped into it, spun a doughnut, then sped off against the traffic,” McLellan said. “He just missed the back of my truck. I was kind of dumbfounded. I thought: ‘What the hell is going on here?’”

This has @sack_vegas written all over it.

“The City of Charlottetown’s CAO is responding to an audit that shows the city’s finances are not black and white,” reports Dave Stewart for the Charlottetown Guardian:

Peter Kelly, the city’s chief administrative officer, said while preparing the most recent financial statements, the city’s finance staff identified a number of accounting items that needed to be addressed.

“The city worked with its finance, audit and tendering committee, staff and auditors to adjust the financial statements to further comply with accounting standards for the public sector, as required by the Municipal Government Act,’’ Kelly said Wednesday. “The city will continue its efforts to further its level of compliance with current accounting standards for the public sector.’’

Accountants from MRSB have cast doubt on the City of Charlottetown’s statement that it showed an $11.2 million surplus in its consolidated financial statements for 2017.

Budget Committee (Friday, 11am, City Hall) — the capital budget will be debated. 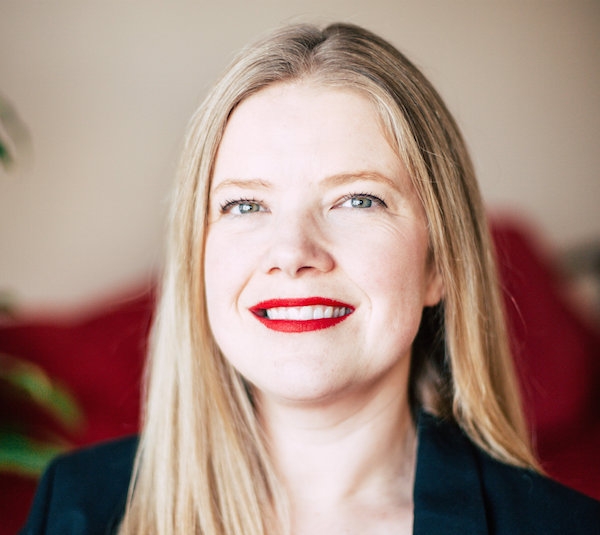 TFW you spend thousands of dollars and hundreds of hours working on a story, only to have another media outlet publish part of the story first. More soon.