The Halifax chapter of ACORN held a small demonstration yesterday at the Spring Garden Road library, calling for increased access to the internet for people with low incomes and “calling on companies like Bell Aliant to offer a $10 per month web service and subsidized computers or tablets,” reports Metro.

I would go further. The internet is now a human right. You cannot be a full citizen with full opportunity in today’s world without easy access to the internet. It’s time that we provide socialized ISP services and free computers to those who cannot afford them.

“At least 16 vials of the drug Midazolam are believed to have been stolen [from the QEII Health Sciences Centre] since the start of August,” say the police in a release. “Midazolam is a type of Benzodiazepine drug and can be dangerous if used inappropriately. It is water soluble, odourless, tasteless and colourless, and could be used as a drug to facilitate sexual assault (aka ‘date rape drug’).” Reports CTV:

John Gillis, a spokesman for the Capital District Health Authority, says the hospital noticed the missing drugs in early August, but attempted to solve the problem internally. They discovered the vials were taken from carts on multiple floors.

“It would suggest that someone who knew what they were looking for went after them,” says Gillis.

3. The new name for the Metro Centre is….

Yesterday, Global TV posted this picture on Facebook, provided by Trade Centre Limited, of the Metro Centre sign coming down, soon to be replaced with a bank logo. 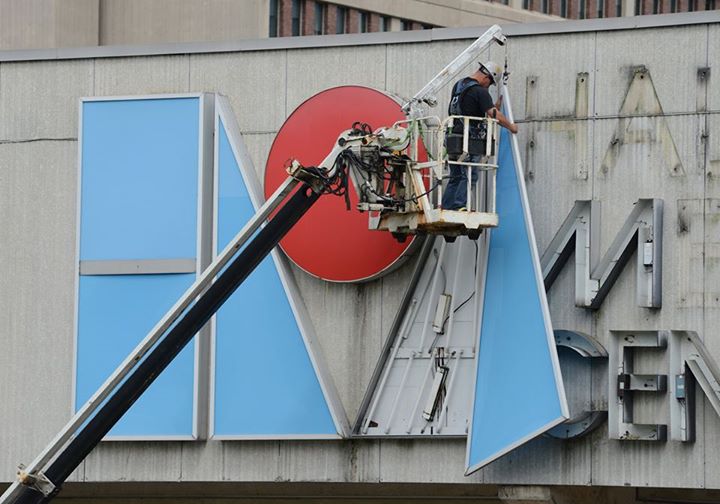 Used to be, we had high corporate taxes (and a steeply progressive income tax) that paid for decent municipal facilities like rinks and arenas. But with the implementation of the neoliberal agenda over the past 30 years, corporate taxes have been slashed, and we do it all backwards. We build things like a four-pad arena in Bedford at a cost to the taxpayer of $50 million, turn around and sell naming rights for the building to a bank for a measly $100,000, and then praise the bank for being a “good corporate citizen.” For a media outlet to simply accept the nomenclature—to call the facility the “BMO Centre” instead of the “four-pad arena in Bedford”—is to accept not just the framing around selling naming rights, but also the tax policies that have led to the need to adopt the policy in the first place, and the PR spin of companies that work to cut their own taxes while selling themselves as “good corporate citizens.” It’s all of a piece.

So, the Metro Centre is going to be named after a bank. I won’t call it the bank’s name, and why should I? The bank’s name is plastered on the building as advertising, and I don’t accept advertising. I might consider an exception in this case, but why the heck should I give free advertising to a bank? No siree. If they want me to call the Metro Centre the name of a bank, they’ve got to pony up the big bucks. Two hundred dollars per mention seems fair, but I doubt they’d agree to it.

Still, that leaves open the question of how I should refer to it. At first, I thought I’d just continue to call it the Metro Centre, but then I got to thinking: How is it that a bank can afford to buy the naming rights to the place? Banks, obviously, have a lot of money. Vaults full of it. A bank is the very definition of a capitalist bastard. And you know where the bank gets its money? All those bank fees, the nickel and dime fees they charge their customers. Here’s a partial list of the bank in question’s fee schedule:

Hmmm. Seeing how the money to pay for naming rights comes from the fees charged to customers, I think it’s appropriate that the Metro Centre will henceforth be called… [drumroll]… The $45 Insufficient Funds Fee Centre.

There are no VLTs between Porters Lake and Spanish Ship Bay, a two-hour drive, reports Selena Ross. There are a variety of reasons the machines have fallen out of favour, but this is the best:

At the Spanish Ship Bay legion, the next-closest VLT site, there’s still enough interest to keep them around, said bartender Wayne White. However, while he has seen lineups for the machines, interest has declined in recent years, especially since My-Play was introduced, he said.

My-Play is meant to promote responsible gambling by tracking each player’s time and allowing people to set limits, but that’s not why it cuts down on play, said White. His customers think “they’re being tracked” and that their odds are sabotaged, he said.

“There’s all kinds of conspiracy theories. I’ve one guy that comes in, gets a new (card) every night.”

[Bev] Williams, who only began gambling after she retired 10 years ago, said addicts don’t set limits with My-Play, but they can be superstitious about it.

“These cards were everywhere. They’re on the floor of the tavern. They’re in the parking lots. And people often think they’re losing because of the card, the password that goes with the card.”

The Nature Conservancy has acquired 198 more hectares of land on the Chignecto Isthmus, which connects Nova Scotia to New Brunswick, bringing the total protected area to 1,012 hectares. This is part of the “moose sex project“:

While New Brunswick has a healthy moose population with more than 29,000 individuals, mainland Nova Scotia’s moose herd has been thinned to the point the species is endangered, with only about 1,000 individuals.

The protected acreage provides a land bridge between the two populations, and maybe the moose will start exchanging phone numbers and we’ll see where things go.

The Nature Conservancy supplies this illustrative video, but the moose don’t actually have sex in it. Rather, they behave as you would expect a species on the brink of extinction to behave: moping around, drinking too much, making pointless political attacks against each other, debasing their culture, and otherwise revelling in self-destructive narcissism at the expense of the collective well-being.

1. Progress in the park

Lezlie Lowe writes about the community garden in Mulgrave Park.

Parker Donham links to this blog post from Clay Shirky, who tells us that:

Contrary to the contrived ignorance of media reporters, the future of the daily newspaper is one of the few certainties in the current landscape: Most of them are going away, in this decade.

Think that’s hyperbole? Shirky provides this chart, which says it all: 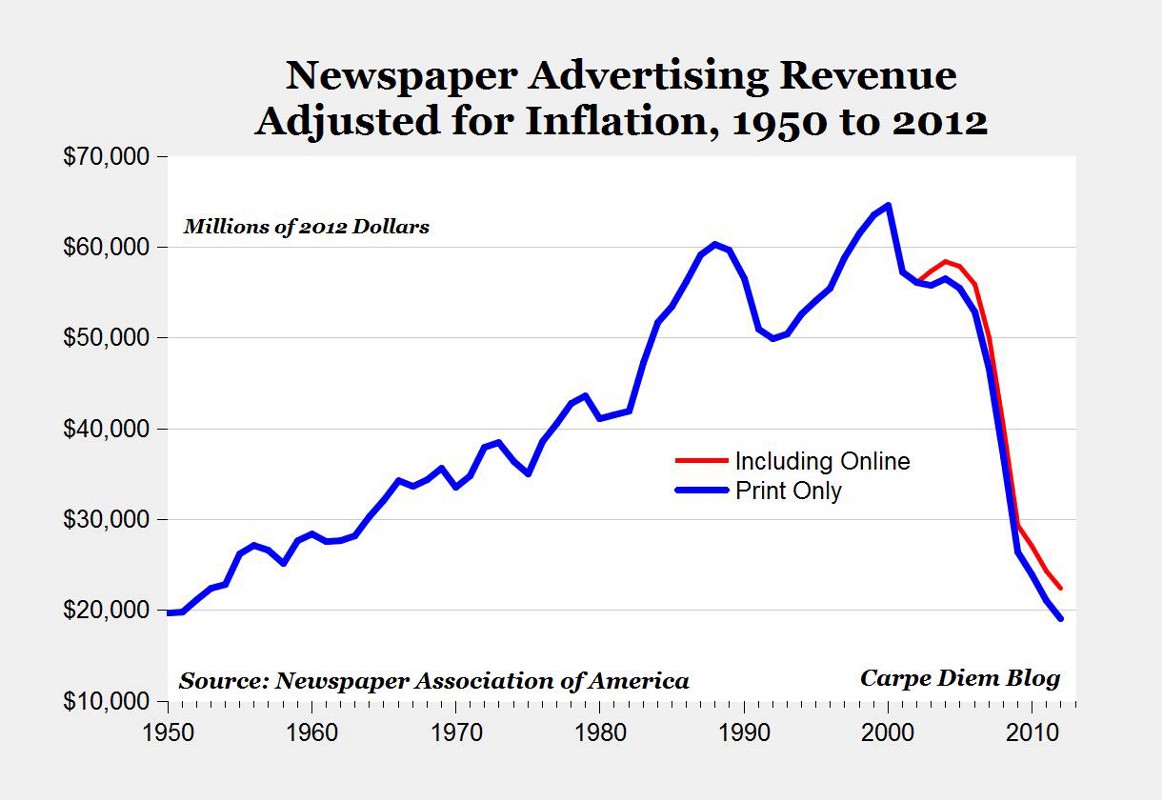 On this date in 1854, Government House caught on fire. The fire was blamed on a “defective chimney.” Six city fire engines and the military fire department responded and doused the blaze, which destroyed part of the roof.

The evolution of milk (2pm, Room 200, Haley Institute of Animal Science and Aquaculture in Truro)—Olav T. Oftedal, an ecologist with the Smithsonian Environmental Research Center in Maryland, will discuss all things milk. “His research specialties include nutritional ecology of terrestrial and marine animals, interactions of plants and herbivores, evolution of amniote reproduction, nutritional requirements of reptiles and mammals, marine mammals, and mammalian milks and lactation strategies,” explains the Dalhousie press release. Bring your own cookies.

Ireland in Psychoanalysis (all day today and tomorrow. Seats are limited, contact [email protected] for reservations)—Explains the Facebook page for the conference:

We still occasionally hear that Freud felt the Irish were the one race to whom psychoanalysis could offer nothing, although it has been known, for some time now, that this spurious sentiment was attributed to him by Fr Thomas Cahill. No such comment has ever been found in Freud’s writings or correspondence, yet the odd afterlife of Cahill’s observation, which continues to surface even today, clearly plays into myths of Irish exceptionalism. Rather like the creative artist, we might surmise, before whom Freud famously suggested that psychoanalysis must ‘lay down its arms,’ the Irish have been presented, or have presented themselves, as an anomaly in Western culture: a spiritual and/or artistic people out of step with broader European currents.

A reader reminds me of this Matt Taibbi piece from last summer. Taibbi explains that:

All journalism is advocacy journalism. No matter how it’s presented, every report by every reporter advances someone’s point of view. The advocacy can be hidden, as it is in the monotone narration of a news anchor for a big network like CBS or NBC (where the biases of advertisers and corporate backers like GE are disguised in a thousand subtle ways), or it can be out in the open, as it proudly is with Greenwald, or graspingly with Sorkin, or institutionally with a company like Fox.

But to pretend there’s such a thing as journalism without advocacy is just silly; nobody in this business really takes that concept seriously. “Objectivity” is a fairy tale invented purely for the consumption of the credulous public, sort of like the Santa Claus myth. Obviously, journalists can strive to be balanced and objective, but that’s all it is, striving.

Try as hard as you want, a point of view will come forward in your story. Open any newspaper from the Thirties or Forties, check the sports page; the guy who wrote up the box score, did he have a political point of view? He probably didn’t think so. But viewed with 70 or 80 years of hindsight, covering a baseball game where blacks weren’t allowed to play without mentioning the fact, that’s apology and advocacy. Any journalist with half a brain knows that the biases of our time are always buried in our coverage.

Gord Helm, the city’s manager of solid waste, has resigned. I don’t know why he left city employ, whether there are personal issues involved or there’s more to it, but it appears to be a sudden move: I’m told that councillors were only told of his departure last Friday, and his last day in the office was Tuesday. And today, the city has issued a tender offer for an executive head hunting firm to conduct a national search to recruit Helm’s replacement.

Helm leaves just as the CAO Richard Butts is trying to effect radical and controversial changes in the waste system, including extending the life of the landfill and for the first time allowing commercial waste haulers to take garbage to dumps outside HRM.

The renovations at City Hall continue, as the city is looking to replace the roof on the structure. 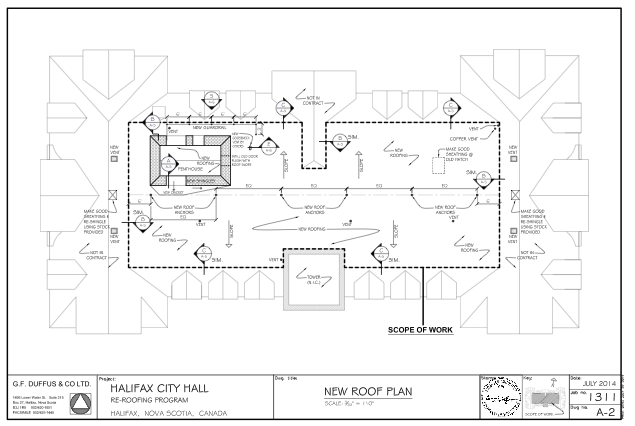