Stretched beyond the limits of patience, forbearance, and resilience, the people of Halifax have simply given up in the face of yet another monster lizard attacking the city.

Halifax Transit won’t start running buses or ferries until at least 10am, when a decision will be made about the rest of the day. Likewise, city offices.

Darrin Natolino, who runs winter operations at the city, told people to stay off the roads for the next 36 hours. “It will be next week before conditions start to improve,” an unnamed city official told the CBC.

“Friends, the arse is right out of ‘er,” wrote Councillor Waye Mason. “With up to 30 cms of snow coming tomorrow and with snow banks in the core already five to six feet tall we are in a crisis and it is going to get worse.”

I wrote the headline above before learning of the #WinterISurrender hashtag.

Now that it’s daylight, I see this is a particularly frightful storm.

Isn’t it time we start sending the children to someplace safe? 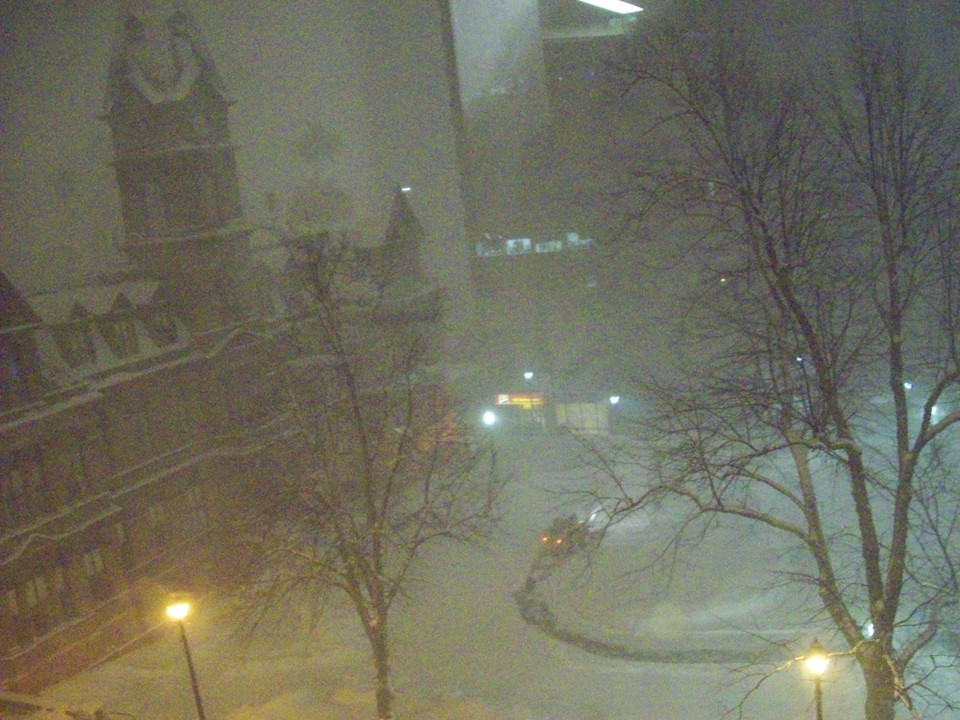 Pamela Cameron was stranded in her office in the World Trade Centre tower overnight, and took the above photo at 4:30 this morning. “Good thing the Grand Parade is getting a priority plowing,” she writes. “One might fancy a leisurely promenade around the circle in front of City Hall.”

Overtime costs at Metro Transit are exploding. In the 2013/4 budget year, the transit system paid out $5,258,90 in overtime — a whopping 13.7 percent increase from the year before.

Recall that the 42-day strike in February 2012 was largely about management demands for reducing labour costs… But overtime costs have not been contained. On the contrary, they’re at the highest levels in Halifax Transit history.

“The province is appealing a provincial court judge decision to toss out a case alleging Halifax violated environmental laws at the city’s landfill,” reports the Chronicle Herald.

Someone should rid the city of the snakes who defame the good people of Ireland.

Sidney Crosby will be coaching a hockey camp at Cole Harbour Place this summer:

The Sidney Crosby Hockey School will be open to 120 kids between the ages of eight to 12, boys and girls. Demand is expected to be very high and the exact criteria has (sic) yet to been determined for admission to the camp.

Maybe a stake through the heart? 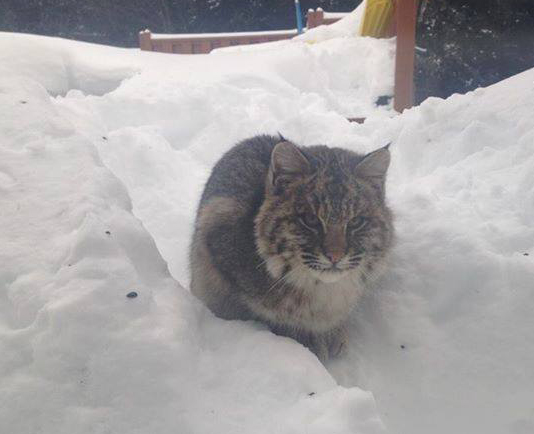 Starving bobcats are going into human territory in search of food, reports the Cumberland News:

“In my 20 years of doing this, this is the hardest winter I have ever seen,” Hope Swinimer with Hope For Wildlife, a non-profit wildlife rehabilitation centre in Seaforth, N.S., said. “Of the ones we’ve gotten involved with, two have passed away. They are starving to death.”

With food supplies literally trapped under ice and snow, the bobcats are dropping their hesitations of humans and approaching homes looking for the usual moles, voles and mice they would eat. It makes for a difficult situation for both man and beast, Swinimer said. Bobcats are extremely dangerous animals, and humans aren’t too genteel themselves, despite good intentions. Creating an animal no longer afraid of humans can lead to dangerous – even life-threatening – situations.

“Two things usually happen,” Swinimer said. “People feed them, which is bad because you don’t want a bobcat becoming used to people; or two, they shoot them. It’s a lose-lose situation for the bobcat.”

Looks like Paul Schneidereit and I are the lone voices in the wind, calling out the superport delusions of Nova Scotia policy makers.

The port of Halifax’s capacity is now estimated to be 1.47 million TEUs. Both Melford and Sydney envisage 1.5 million-TEU container terminals. That’s potentially close to 4.5 million TEUs of port capacity.

For context, Vancouver, by far Canada’s biggest port in terms of traffic, handled a record 2.9 million TEUs last year. Prince Rupert, B.C., often cited as a model for places like Melford or Sydney, saw traffic of just over 600,000 TEUs.

Together, Vancouver and Prince Rupert saw 3.5 million TEUs of container traffic in 2014. That’s on the west coast, where the largest percentage of global container traffic — between Asia and North America — flows.

In Nova Scotia last year, Halifax, the only port now in operation in the province, handled just over 400,000 TEUs of inbound and outbound containers — significantly under capacity.

That level of container traffic through Nova Scotia is likely to remain stagnant, at least in the short term.

I put it more bluntly here:

I would love to know if I’m the only one who feels there is something very wrong with the amount of money that CBRM councillors receive for weekly travel with no receipts to account for said travel.

I’m not saying they shouldn’t receive anything but, come on, over $500 a month?

Our roads are a mess but we are told the municipality has no money to fix them. It’s so unfair.

We put the current mayor in office hoping he would change and help this island. Now is the time to do it. Just looking at this problem is not good enough.

When elections come around a lot of people say why should I leave my house to vote when all we get is the same crap promised to us. It is so sad that we are leaving attitudes like this for the younger kids.

I’m thinking of buying one of these things, just to get around town. 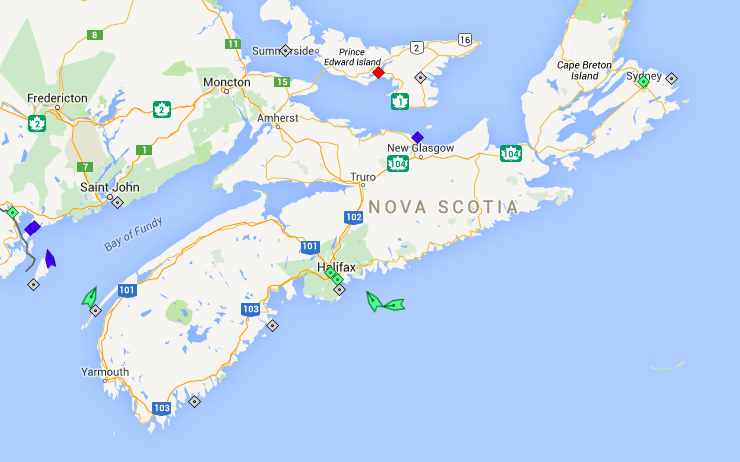 The seas off Nova Scotia, 8am Wednesday. Map: marinetraffic.com

Opal Ace, car carrier, Emden, Germany to Autoport (the Opal Ace was scheduled to arrive yesterday, but was evidently delayed by weather. The ship is approaching the harbour this morning.)
Federal Tweed, bulkier, Baie Comeau to anchorage

I normally walk over to the News 95.7 studio on Wednesdays for a 4pm appearance on the Sheldon MacLeod Show, but given the weather I might just call it in today. Either way, I’ll be joined by Hilary Beaumont.