In February, a judge ordered the province to reimburse Sally Campbell $28,376—the cost of her medical marijuana over the past five years. Now, the province is appealing the ruling, saying that never mind the 65-year-old Campbell’s real illnesses and her Health Canada certificate for medical marijuana, her supplier was a common drug dealer because his paperwork wasn’t in order. I can’t help but wonder if the province would make the same argument about a drug store pharmacist with problematic paperwork: would they screw the patient out of reimbursement?

For purposes of timing crosswalk lights, the city used to calculate that pedestrians walked at a speed of 1.2 metres per second. But recognizing our aging population, that speed has recently been reduced to one metre per second, and crossing times are being increased.

• There are only about 500 North Atlantic right whales on the planet, and five or six of them have made an usual appearance off Cape Breton, the CBC reports. This is another data point in my ongoing “something is majorly wrong with the ocean” collection. Moira Brown, a scientist at the New England Aquarium in Boston, tells that ceeb that the whales typically travel up the Bay of Fundy but they’ve been mostly a no-show in recent years—in past years up to 100 of the whales were found in the Bay, but last year just five showed up.

“Right whales eat plankton and there just wasn’t the plankton resource there [in the Bay of Fundy] that has been there in the past years and we suspect it’s the same this year. So it makes sense for the whales to move around and try to find food sources elsewhere — and hopefully that’s what’s happening when they’re going up to Cape Breton, that they’re getting some food,” says Brown.

• A mako shark named St. Mary’s is being tracked as it swims near Nova Scotia. Chronicle Herald reporter Eva Hoare’s article about the creature is informative and provides a helpful link to the Guy Harvey Research Institute’s tracking website, where you can drill down and follow the various sharks yourself. 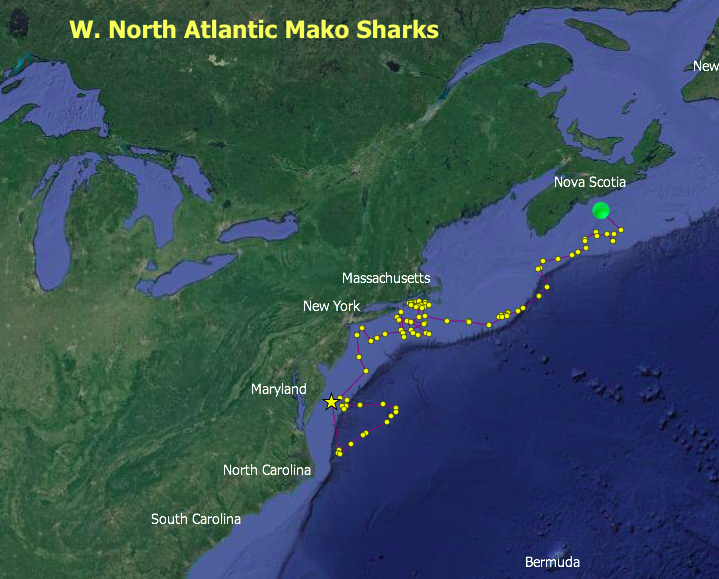 • Forty- to sixty-thousand bees have moved into Garnet and Gail Melanson’s spare bedroom.

• An owl was found injured in the middle of Hammonds Plains Road and attended to.

• There’s a crisis of abandoned cats in Moncton, so many that shelters euthanize them.

Aerosmith is playing at Open Hearth Park in Sydney this weekend. The park is the former tar ponds site. Stephen Archibald recently visited and found that the park is a visual delight. 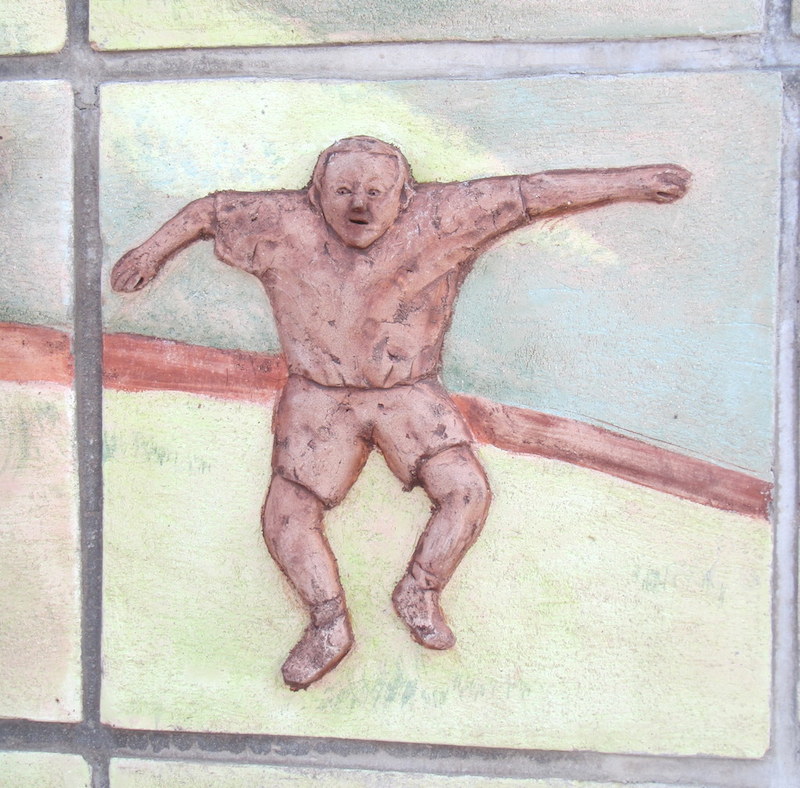 Part of a mural at Open Hearth Park in Sydney. Photo: Stephen Archibald

The Ecology Action Centre is hosting an event next week at Shambhala School, called Food Up!Skilling, which teaches people how to cook and put up food. “Let’s face it,” says Lezlie Lowe: “Most of us never learned to do any of this stuff in the first place. Generations before us knew by social osmosis how to grow, cook and sustain themselves. For us, tomatoes come in tins, eggs in cartons, honey in squeezable bears and hummus in plastic from Costco.”

As if the past week’s worth of similar sob sessions weren’t enough, the Chronicle Herald editorial board once again condemns the fracking ban. I somehow missed this, so thanks to Parker Donham for pointing it out, but a few days ago CCL Group chair Steve Parker wrote about how the oil industry was its own worst enemy in the Nova Scotia fracking debate. In his piece, Donham tries to toe a middle line, but he echoes my observation that

Until Parker’s column yesterday, the Herald’s response to the fracking ban had been a unified chorus of handwringing by columnists Black, Leger, Lethbridge, Stephenson, and Taylor, none of whom could summon even passing mention of the existential crisis bearing down on Planet Earth: climate change.

Reciprocal relationships between oral vocabulary and reading (3:30pm, Life Sciences Centre Room 4263)—That’s the title of a talk to be given by Jessie Ricketts, from the University of Reading in Britain.

Microcredit (noon, McNally Main 227)—This is the first of the Friday Speakers Series for International Development Studies. The presentation is titled “From ‘Anti-Developmental’ Microcredit to a ‘Developmental’ Local Financial System in Post-Apartheid South Africa, and the Lessons for Africa as a Whole,” and is presented by Milford Bateman, an economist from the University of Juraj Dobrila Pula in Croatia, who is a visiting scholar at Saint Mary’s this year.

I have other commitments today, but would have really liked to have gone to this talk. Just before the global financial collapse of 2008/9, microcredit took off in a major way, and there was a big international conference held here in Halifax. I was suspicious and unconvinced that microloans could do much to help the world’s poor; rather, it seemed to me, microcredit was part of the larger neoliberal agenda of financializing everything, and would end in disaster for most people. Now, I see that Bateman has penned a series of articles for The Guardian expressing just that idea, but with actual facts and figures to back it up. Although I can’t make today’s talk, I’m glad he’s in town, and I hope to interview him soon.

Atlantic writer Eric Jaffe has a piece headlined “Why the People in Charge of Transit Systems Should Be Required to Actually Ride Transit,” in which he explains how Christof Spieler, who is a director of Houston’s transit system, has helped vastly improve the system simply because he is a regular rider:

But he couldn’t have done it without his experience on Metro as a guide, which makes him Exhibit A for why the people planning America’s transit systems, from board members to senior management to project designers, should be riders themselves.

So far as I know, none of Halifax Transit’s managers take the bus to work. The Halifax Transit administrative offices are in Burnside, one of the largest employment centres in HRM, so if there isn’t convenient transit service, we’ve got a real problem. But I suspect that convenience isn’t the issue. Rather, managers don’t think of themselves as the kind of people who use transit, and conversely see bus riders as the other, people to provide service to, not to sit next to.

Something quite weird, and quite telling, happened to me yesterday. Michael Karanicolas of the Centre for Law and Democracy had very kindly invited me to meet with representatives from the Treasury Board, who were in town as part of their duties to “coordinate” the federal government’s “open government Action Plan.” I wasn’t able to make the morning session, but from later discussion I gather that the three Treasury Board employees gave a dog and pony show explaining how the federal government was really trying, honest, to open up government, improve the Access to Information process, and usher in a new era of informed democracy.

The afternoon session was billed as an “open discussion” with the Treasury Board employees where participants could “talk about problems with the current open government processes and how they can be fixed.” When I arrived, seven or eight people were sitting around a table at City Hall, and they made room for me to join in. Then, we went around the table introducing ourselves. Michael introduced himself and explained the role of the Centre for Law and Democracy. I was next, and said simply that I’m a reporter in Halifax. Then the others introduced themselves, some people doing academic work on open government, a couple of people involved in non-profits, like that. But when we got around to a woman—and I’m sorry, I didn’t catch her name—who worked at the Treasury Board, she asked who I worked for and left the room to make a phone call.

When she came back, she said that with a journalist in the room, the Treasury Board employees were not authorized to speak without a government media professional in the room. That’s right—a session on open government could not proceed without a media minder present because the discussion might go off the government’s talking points.

Toby Mendel, president of the Centre for Law and Democracy, who was also present, said the incident is illustrative of Canada’s failure of open government, and that Canada is far behind the rest of the world when it comes to open government processes.