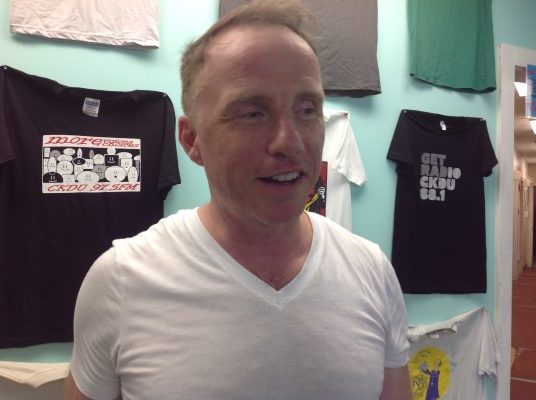 John Wesley Chisholm is a successful television producer and Juno Award-winning musician. Now he’s throwing his hat into the ring as the Progressive Conservative candidate for Halifax Chebucto in the next provincial election. Find out what Front Line Fever means and why he thinks it wouldn’t take many Tims to make a dozen.

Also, city council voted overwhelmingly to protect the Blue Mountain-Birch Cove Lakes area from development. The only councilors who didn’t vote in favour of the preservation either did so out of spite or for free dim sum.

Habitat for Humanity, which builds homes, is “partnering” with Steele Auto Group, which just bulldozed a neighbourhood.

How many times have we been through this? If you see an amazing full-court, last-second basketball shot, or kid doing something cute, or cop beating someone’s brains out, or any of the other gazillion things photographed or video recorded that now go “viral” in our digital age, Hold the Damn Camera Horizontally!

A horizontal photo or video fits on a webpage or a TV screen; a vertical one doesn’t, and so editors have to place annoying black bars next to the pic to fill in the space allotted for it. Also, editors will limit the height of a vertical photo placed on a webpage, so there will be less resolution. There are a handful of exceptions (Big Ben and the Leaning Tower of Pisa come to mind), but generally speaking it is all around a better aesthetic experience to view a photo horizontally.

And to the annoying two people who will inevitably respond with “Snap Chat!”: Shut up, you. Photos and videos don’t go viral on Snap Chat. They go viral on Facebook first of all, then on Twitter, then on webpages, and all of those platforms require horizontal placement for the most pleasing viewing experience.

All of which to say that when Alex Fraser — who is no doubt otherwise a kind, generous and decent person — saw a big fish swimming around the Bedford Basin, she took out her phone and videoed it with the phone in the vertical position.

So on moral and aesthetic grounds, I refuse to repost her video. As CTV reports:

But after some consideration, even Fraser is questioning whether it was actually a shark.

And she’s not alone.

“It is definitely, I can say 100 per cent, an ocean sunfish,” said shark expert Warren Joyce of the Bedford Institute of Oceanography.

Joyce says he isn’t surprised by the mix-up.

“Their dorsal fins do look fairly similar when they’re in the water, but from the video, you can see the animal below the water has an elliptical shape,” said Joyce. “You can see a large dorsal fin that flops over occasionally, as opposed to cruising through the water.”

If you really must see the video, you can find it here. 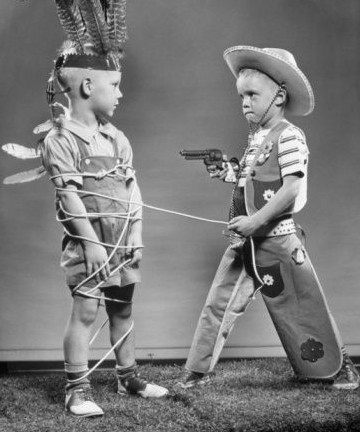 When I was a kid, the other neighbourhood boys and I would play war. We’d meet up at a vacant lot, a leftover development parcel that abandoned construction waste and gravel had extended out into a tidal marsh to form two pieces of dry land we dubbed “islands,” and we split into two groups — Cowboys and Indians.

What can I say? We were the children of military men, growing up on a mid-20th century TV diet of nonstop repeat westerns, and in the middle of an actual war that saw some of the boys’ older brothers and fathers returning home in body bags. Our culture was preparing us for war; of course we played at war, and we grabbed the metaphor that was at hand: Cowboys and Indians.

I don’t remember if we ever invented reasons for our wars — I don’t recall any broken peace treaties, corporate grabs for natural resources, or settlers trying to clear the land. I also don’t recall that there was any particular shame in being on the “Indian” side versus being on the “Cowboy” side. Reasons were for others to figure out, I suppose: we were just there for the war. And so we lobbed dirt clod bombs at each other, pretended our toy guns were real, and argued over who was dead and who was merely injured.

Was there any harm in kids playing at war? I’m not sure. I grew up to become a borderline pacifist; but that had more to do with my natural contrarian nature than my upbringing — the rest of my world was literally preparing for Armageddon, and so I took the opposite tack. In contrast, most of my former playmates went on to reflexively embrace the military and, by extension, war. I can’t say what role tossing dirt clod bombs at each other as six-year-olds played into any of that.

But fast forward to 2016, and I can’t help but think that my birth nation and my adopted nation and a few other boys from the North Atlantic neighbourhood are now playing a high-tech, big-money game of Cowboys and Indians.

This war game has a name: Cutlass Fury. A “cutlass” is the short sword sailors used to carry onboard with them; “fury” is being illogically and violently irate.

The purpose of this war game, explains a Navy press release, is an anti-submarine warfare drill:

Canadian Navy ships Fredericton, Athabaskan, Summerside, Montreal, Goose Bay and Windsor will participate in the exercise with ships from the U.S. Navy, Royal Navy and Spanish and German Navy.

Cutlass Furry (sic, and isn’t that a delicious typo?), running from September 9 to 26 will involve Task Group-level exercises with a particular focus on joint maritime tactical warfare in a multi-threat environment. The exercise will focus on anti-submarine warfare, air defense, amphibious operations and joint operations.

A total of 11 ships, three submarines and 26 aircraft with some 3000 personnel overall will be involved in this exercise led by Maritime Forces Atlantic.

Today, starting at around 1pm, most or all of those 11 ships will parade from the Bedford Basin, through the narrows, and out to sea. I’m sure lots of people will flock to the shore to watch the ships leave. I certainly will; it will be an impressive display of military might, a water version of a Soviet May Day parade — I wouldn’t dream of missing it.

As with my childhood games of Cowboys and Indians, I don’t know if Cutlass Fury leads to increased chances of actual war or not. Canada seems to be wrestling with the role of its military and how its (perhaps mythologized) history of peacekeeping plays out after Stephen Harper’s bald warmongering, but I don’t hear any such nuance from our allies, and especially not from south of the border. On the other hand, hawks will point at the supposed deterrence value of a well-oiled military and, arguably, we’ve got the stuff so we may as well know how to use it.

The existential challenge of our times is climate change, and in direct military terms our biggest immediate security threat is people who can wreak immense destruction wielding nothing more than box cutters. Nuclear submarines and anti-submarine missiles are not an effective weapon against either.

And a nation that is on a permanent military footing and is willing to direct billions of dollars to maintain a war machine is making choices. Funding a military parade means not funding clean water for native reserves. Buying a second-hand submarine is using money that could otherwise be used to build a wind farm. A year’s military budget could fund low-cost university education for all.

Beyond that, a hyped-up military is madness. It pivots our collective psyche away from smart and thoughtful reflection and reduces it to simplistic formulas of black-and-white — Cowboys and Indians, if you will — that rarely lead to peaceful coexistence. On an individual level, it leads to broken families, to suicide, to despair.

See you on the waterfront.

Paul Andrew Kimball points us to the program for this year’s Atlantic Film Festival, and specifically to the welcome messages from Premier Stephen McNeil and Minister of Culture Tony Ince. Writes McNeil:

It is my government’s privilege to work with all Nova Scotians, including work this past year with Screen Nova Scotia and other stakeholders during a time of significant change in our province and within our film industry.

Change brings both opportunities and challenges. It is something we face together. The government recognizes and supports the fundamental importance of culture in Nova Scotia — and the significant role the film industry plays.

Not only does the festival provide a platform for east coast productions to reach a wider audience, it acknowledges the significant role that the Atlantic region plays in Canada’s film industry.

No doubt festival managers are obligated to print the politicians’ nonsense in return for provincial financial backing, which last year amounted to $182,000.

“But,” writes Kimball, “when I see people like McNeil and Ince try to rewrite history, I can’t let that go unchallenged.”:

Here’s what the Liberals really did:

1. Without consultation or warning, they destroyed a sustainable, productive and transparent system that had worked well for over two decades.

2. They eventually replaced that successful system, which worked equally for all Nova Scotia filmmakers, big and small, with a system that favours production from away, at the expense of our own writers, directors, producers and actors. Anyone who thinks the new system has maintained a level playing field is dreaming and/or delusional.

That’s what really happened, and I have no problem saying it again and again every time a Liberal tries to claim otherwise. As we rightly and proudly celebrate Nova Scotia films and filmmakers next week, never once must we allow ourselves to think that the Liberals truly support or believe in our local industry.

In case you haven’t noticed, we do have a professional Canadian Football League in this country. Yet, not one article re: this sports activity has appeared in the Guardian this season. Further, even reporting scores has been haphazard. For example, following a Labour Day weekend of play, no scores were published in Tuesday’s (Sept. 6) paper. Please correct this oversight.

The sea off Halifax, 9:30am Monday. Map: marinetraffic.com