You are here: Home / Featured / Michael and me, dancing at the lesbian bar: Morning File, Thursday, April 7, 2016 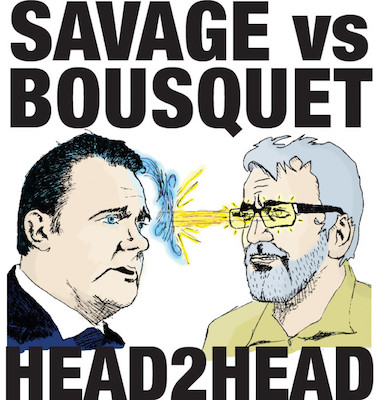 “Halifax Mayor Mike Savage will be taking another run at City Hall this fall, but who will be running alongside him is anyone’s guess,” reports Zane Woodford for Metro:

Right now, no one seems to know of any candidates who’ve committed to a run at the mayor’s seat in 2016. The municipality won’t confirm the names on the ballot till nomination day in September, and Savage said he doesn’t know of any challengers yet.

So barring a last-minute campaign by a deranged Twitterer or a bombastic talkshow host, the next mayoralty is Savage’s for the taking.

Savage, incidentally, is graciously making himself available tonight to be interviewed by me for the Examineradio podcast and radio show.

This is a fundraiser for CKDU radio, which is the Dalhousie University student station. My friend and Examineradio producer Russell Gragg is also the CKDU station director, and he has brought a ton of energy and new ideas to the station.

One of those ideas has been to pair up the station with local podcasts, such as Examineradio — we use the station’s studio for recording, the station gets a show, and the Examiner gets a podcast.

Another idea was to do away with the annoying on-air pledge drives that community and public radio stations have been doing for decades, and to replace them with event-driven fundraisers. Past events have included a show at Gus’s and a film at Carbon Arc. This Saturday, CKDU is pairing up with the Ladies Beer League for the release of the “barrel-aged Triskaidekaphobia” at Stillwell.

Tonight’s Examineradio interview with Savage takes place at the Company House, at 2202 Gottingen Street. Russell and I will open with our usual “week in review” discussion, then we’ll have a surprise musical guest before speaking with the mayor. Time allowing, we’ll take a few questions for Savage from the audience.

Doors open at 5:30, the taping starts at 6pm sharp, and we’ll wrap up by 7pm. Everyone is welcome. Tickets are $10 at the door, or you can come for free if you become a monthly sustainer to CKDU (you can sign up as a sustainer at the door). All proceeds from tickets go to CKDU, but we’ll additionally be selling Examiner subscriptions and swag, with proceeds from those sales going to buy an Examiner corporate jet. 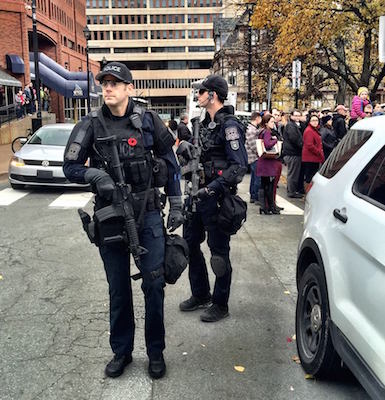 The Halifax Regional Police Department is building an inventory of C8A2 semi-automatic carbines, reports Rob Gordon for The Coast:

Putting these guns into the hands of the police comes at an odd time. Crime in the municipality has been decreasing steadily over the past decade, and crime across Canada is at its lowest level since 1969. From 2011 to 2014 there were only three instances where Halifax Regional Police fired a gun at a person in the line of duty. Most of the time, triggers were pulled to euthanize injured deer hit by trucks.

None of this has stopped HRP from joining the North American police arms race to acquire weapons usually found in a war zone.

Over the past 36 months, the department has tripled the number of heavy arms in its arsenal. Police say that equipment is necessary to prevent gun violence; to thwart potential terrorism; to stop another Moncton. Tactically it’s intimidation over de-escalation. It’s also an example of the gradual militarization of police across the continent that’s happened in places like Ferguson, Missouri and is happening now in Halifax.

Gordon interviews lawyer Michael Spratt, who points out that “When police display this type of hard equipment it puts a wall between them and the people…People are afraid of it and they become afraid of the police.”

It works the other way around, too: with the increased weaponization, police increasingly think of people in the community as “the other,” as always a potential threat.

We once valourized cops, and rightly so, for putting their lives on the line to protect the community. But as I’ve written before:

But something happened along the way. In the public mind, the heroes had to be protected at all cost, because they were heroes. The very thing that made them heroes — accepting personal risk — is now the thing that is no longer allowed — any risk is too much to ask of them.

And not only are cops no longer expected to accept any personal risk whatsoever, they’re now beyond criticism.

The risk-aversion of cops has been taken to absurd extremes, such that they are now better armed than the average soldier fighting in a war zone. 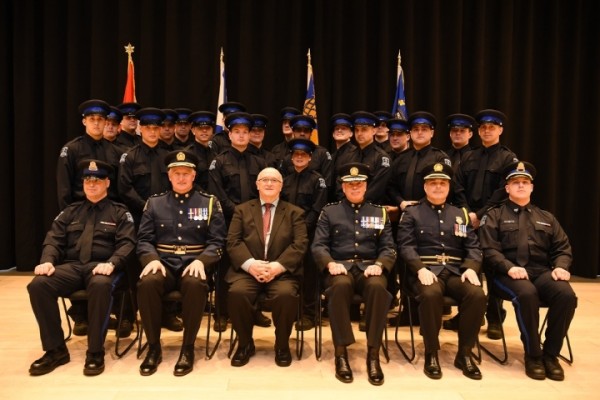 Twenty more nameless people are allowed to roam the community with weapons of war.

There’s another aspect to this: cops are no longer members of the community, people who live and work and shop and go to ball games with us, but are instead nameless others. We saw this last week when 20 new police recruits were sworn in, and not one of them had an actual name that was given to the public. I guess the thought is it would be too risky to say who it is, exactly, we’re letting roam around our community with C8A2 semi-automatic carbines in the trunks of their cars. 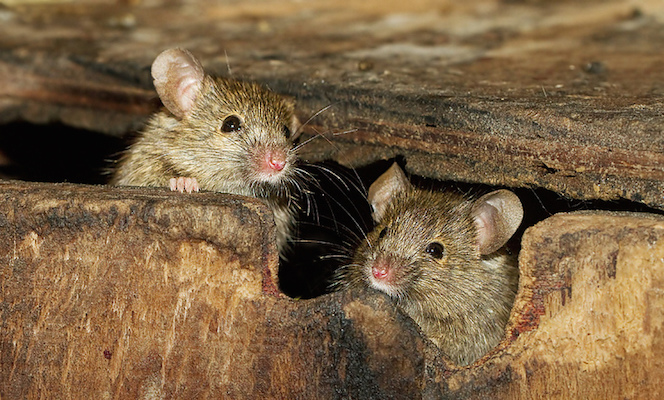 “Tenants living in a series of row houses in Spryfield have been dealing with a terrible mice infestation for two years now,” writes Robert Devet. “The buildings are owned and managed by the Metropolitan Regional Housing Authority, a provincial government corporation, with the Minister of Community Services at the helm.”

Devet gives the ugly details of the infestation:

Amy (not her real name), seems to live at the epicenter of the infestation. In a single month she caught about 50 mice.

“They are chewing the wiring, they chew the insulation on the hot water boiler, they ate the whole thing,” Amy tells the Nova Scotia Advocate.

“Just recently, in the beginning of March I noticed my house was infested again,” says Amy. “I wanted to clean out my storage room, and the mice had destroyed everything.

“Irreplaceable things, pictures of a child that is no longer with me. Her album full of pee. All my children’s baby books. Everyone that knows me knows that is the most important thing in the world. I lost my pictures, and that’s devastating to me.”

Mice are on the kitchen counter, they come out of the washing machine, they totally destroyed a living room couch, Amy says.

The tenants are today rallying and bringing their issues to Metro Housing. 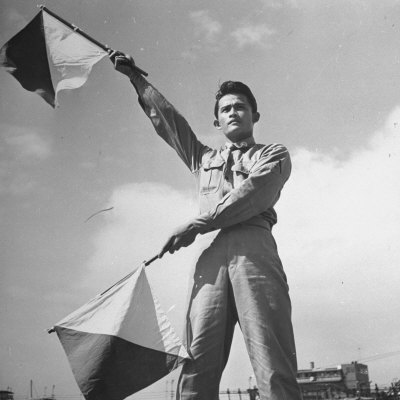 “A Bedford, N.S., woman has spent more than a decade trying to plug a privacy breach that has resulted in personal mental health records being faxed to her business,” reports Yvonne Colbert for the CBC:

Over the years, Lisa Belanger estimates she’s received dozens of faxes from doctors’ offices around the province, all intended for a mental health referral office. Belanger says she’s been repeatedly assured that the problem would be fixed.

Belanger doesn’t remember the date of the first fax she received in error at her spa, but she does remember the information in it.

The fax, which contained the patient’s name, phone number and other identifying information, as well as notes on their mental health, was from a doctor and intended for a community mental health referral office in Bedford-Sackville area. The fax number of the office is one digit different than Belanger’s business.

…She estimates she receives between eight and 14 a year.

Faxes? What is this, 1985? Maybe doctors should switch over to the pony express or semaphore or some other cutting-edge technology.

Just for shits and giggles, I did a Google News search this morning for “innovation” and “Nova Scotia.” Five of the first six results came from the Chronicle Herald: 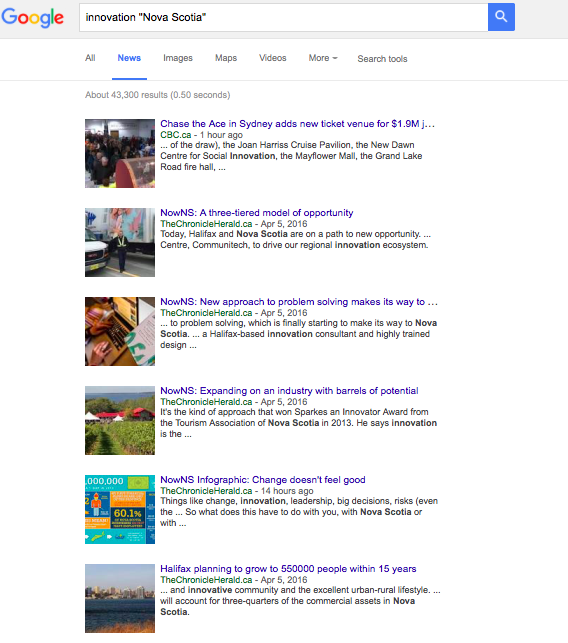 If you don’t have any actual reporting skills, you can just spout a bunch of empty buzzwords.

Graham Steele gave a TEDx talk. I haven’t watched the whole thing yet, so can’t comment.

I thought I would send this along on the opening day of fishing season.

I’ve been fishing for most of my life. I remember the days when you could walk across most rivers on the backs of Atlantic salmon. But, as most fisherman will agree, those days are long gone. Acid rain, urbanization, over-fishing, poaching and climate change have all impacted fish populations. I look to the mainland of Nova Scotia and Fundy coast where the salmon fishery is basically non-existent.

This year I became a new father. I already bought my son his first fishing rod, camo hat and enough camping equipment to prepare us for the apocalypse. I can’t wait to teach him how to cast a fly, how to present a fly to an Atlantic salmon, how to trick a brown trout and, most importantly, how to respect the fish. I hope he has memories of fishing the back country of this beautiful island as I fear in the very near future, there won’t be salmon left to fish.

For any islander who loves to say “there is nothing to do here” might I suggest take up fishing. There are endless places to fish. Take your kids fishing; your nieces, your nephews, your cousins, take them all. Take your elderly neighbor fishing – he may just have a few secret spots for you. Take your dog. Make memories. Make the experience meaningful.

Get a picture with your fish, then release it back into the water. Say, “bye-bye fishy, tell your friends to come by, go make babies!”  Post the pictures on Facebook, twitter, Instagram. Print the picture off and put it in your living room or on your office wall. Brag to your friends about “the big one that got away.”

See, I believe the more people who experience fishing and all that goes with it, the more they will respect habitat, the fish and the industry. Things are bad out there. The great thing about fishing is fishing more will educate more and with education comes knowledge and knowledge is power. We can turn this thing around and get back to the “good ol’ days.”

Get after it. Fishing is awesome. If you don’t catch a fish, no big deal. The best fishing stories out there don’t usually even involve a fish.

Also, if you were planning to attend the Environment and Sustainability Standing Committee that was scheduled to meet at 1pm today, feel free to make other plans. It has been cancelled.

SIM Research Day (11am, Room 3087/3089 Kenneth C. Rowe Management Building) — Students will be giving presentations that outline the research they have been conducting in the MLIS and IDPhD programs. They will also be providing free snacks, huzzah!

Dalhousie Dentistry alumni Asile and Asraa El-Darahali will talk about their experiences caring for dental patients in the Za’atari refugee camp near the Jordan-Syrian border. A reception will follow. Admission is by donation (cash or cheque). Proceeds will go to support the Halifax Dentistry Student Society for Refugees and the North End Community Dental Clinic Fund. 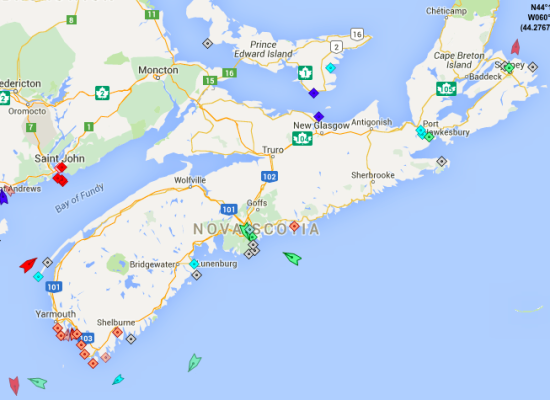