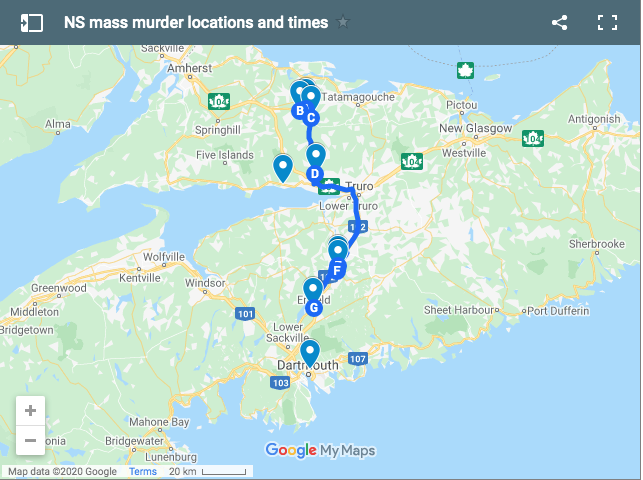 A map showing the path of the murderer

The class action lawsuit brought against the estate of the man who killed 22 people and injured seven others during a fiery rampage across northern Nova Scotia has been updated through an amended statement of claim.

The lawsuit includes three groups of plaintiffs: those whose loved ones were murdered by the person the Halifax Examiner refers to as “GW,” those who were injured by him, and those who lost property and pets as the result of his actions.

Nicholas C. Beaton of Onslow Mountain represents the families whose loved ones lost their lives.

On Sunday morning, April 19, Beaton’s pregnant wife Kristen was on her way to provide care to a Victorian Order of Nurses (VON) client. She was shot to death on the Plains Road between Glenholme and Debert by the gunman, who was disguised as an RCMP officer. Beaton was unaware that a manhunt was underway for a killer driving a replica RCMP vehicle because that information was not shared publicly until 10:17 am via a Twitter message from the RCMP.

Patterson Law’s Robert Pineo said that 21 of the 22 families whose loved ones were murdered have now joined the case — which still must be certified by a judge — as well as seven people who were injured by the killer. The amended statement of claim notes:

The representative Plaintiffs plead that at no time did the RCMP, or anybody else on its behalf or independently, issue an alert via Alert Ready, an emergency alert system available to Nova Scotia to distribute public safety messages province-wide.

The updated statement of claim names Clinton Ellison as a representative for people who were injured (physically and psychologically) by the gunman/arsonist. He is the brother of Cory Ellison who was killed by GW. The court document says:

Lawyer Pineo says both Clinton Ellison and Nick Beaton continue to see their daily lives impacted by the murderer’s actions. The common-law spouse of GW, who managed to escape with her life after being assaulted and handcuffed the night of April 18, is specifically excluded from this class-action lawsuit. This enables her to mount a potential claim through probate court to the estate amassed by the wealthy denturist.

The latest statement of claim asks the court to freeze all assets held by three companies GW owned and controlled. Atlantic Denture Clinic Inc. and Northumberland Investments Inc. are described as the “business names” for two “unidentified numbered companies” that were both incorporated outside this province. Berkshire Broman Corporation was incorporated in New Brunswick in 2008 and is registered in Nova Scotia. The court document names Berkshire Broman Corp. as the owner of the RCMP replica cruiser driven by GW during the crime spree. The documents allege the other two companies were instrumental in purchasing the gasoline used to start fires that destroyed homes and vehicles owned by others and should be considered “alter egos” of GW.

The amended statement of claim also names Ryan Farrington as a representative of people who suffered the loss of property and pets (five) at the hands of GW.

Farrington is a surviving adult child of Dawn Gulenchyn and step-child of Frank Gulenchyn. Both were killed by [GW] in Portapique at their home at 71 Orchard Beach Drive, in the late hours of April 18, 2020. [GW] then burned their house. The house was a total loss.

The Call For A Public Inquiry Grows Louder 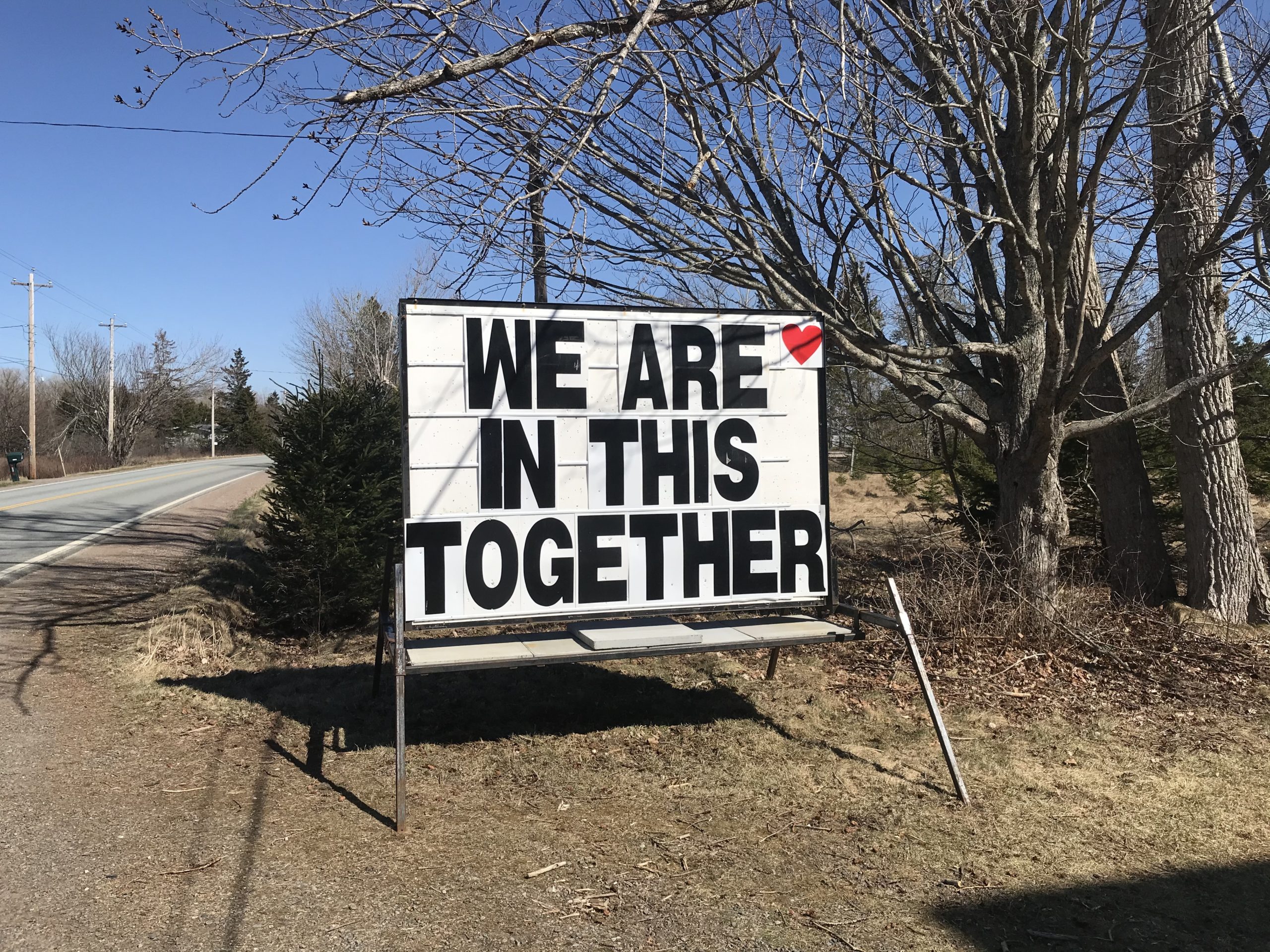 Mourners erected memorials and signs like this one on Highway 2 in Portapique after the mass shooting that began in the community on April 18, 2020. Photo: Joan Baxter

In addition to seeking financial compensation for their losses, more family members are coming forward to demand a public inquiry to resolve some of their unanswered questions about the mass shooting.

Nick Beaton and the parents of Alanna Jenkins, who was killed alongside her husband Sean McLeod at their Hunter Road home near Wentworth, have recently been joined by Darcy Dobson. Darcy is the daughter of VON employee Heather O’Brien, yet another of the shooter’s 22 victims. Here’s a portion of the plea Dobson posted to Facebook:

I am the third born of six children to Andrew and Heather O’Brien. On behalf of my family and our community I am writing this to formally request the start of a Public Inquiry into the Mass shooting on April 18th and 19th…

Heather O’Brien was a strong woman; she raised her children right! She taught us to be brave and to stand up for what we believe in… we are requesting you give us the information we all deserve. I am just one voice of many families you will be hearing from and I know we all have similar stories about the beautiful people we’ve lost.”

We understand that there is an active investigation. We also know we have rights to information especially regarding our individual circumstances. I think we can all agree that public safety is of the utmost importance and feeling safe in our communities is a must. The back and forth about who’s responsible for an inquiry is unreal. It causes the families of this senseless crime more distress and again I’m sure we can all agree that is not okay…

Hell, I’d like to go back 40 days ago when I was talking to my mother on the phone about when to put my garden in and something funny the kids did, but I can’t. The sad reality is our loved ones were stolen from us. Mistakes were made at the provincial and the federal level and we need answers, we need answers to heal, we need answers so we can find a way to live in this new normal that we’ve been forced into.

If this is the worst Massacre in Canadian history why are we not trying to learn from it? What’s the hold up in the inquiry? Why hasn’t this happened yet? Where are we in the investigation? Was someone else involved? Why can’t we get any answers at all 40 days in?!

The RCMP has said this is a complex investigation and its members have already spoken with 500 people about what they knew before, during, and after the carnage. The federal force is working on a psychological profile of the killer and trying to determine how GW illegally obtained his arsenal of weapons.

Premier Stephen McNeil has so far suggested any inquiry into the RCMP’s conduct before or during the shootings ought to be led by Ottawa because the RCMP is a federal force. But since the municipalities and the province employ the RCMP and pay for its services, the province’s Attorney General has the authority under the Public Inquiries Act to call an inquiry at any time. Either level of government could choose to act.