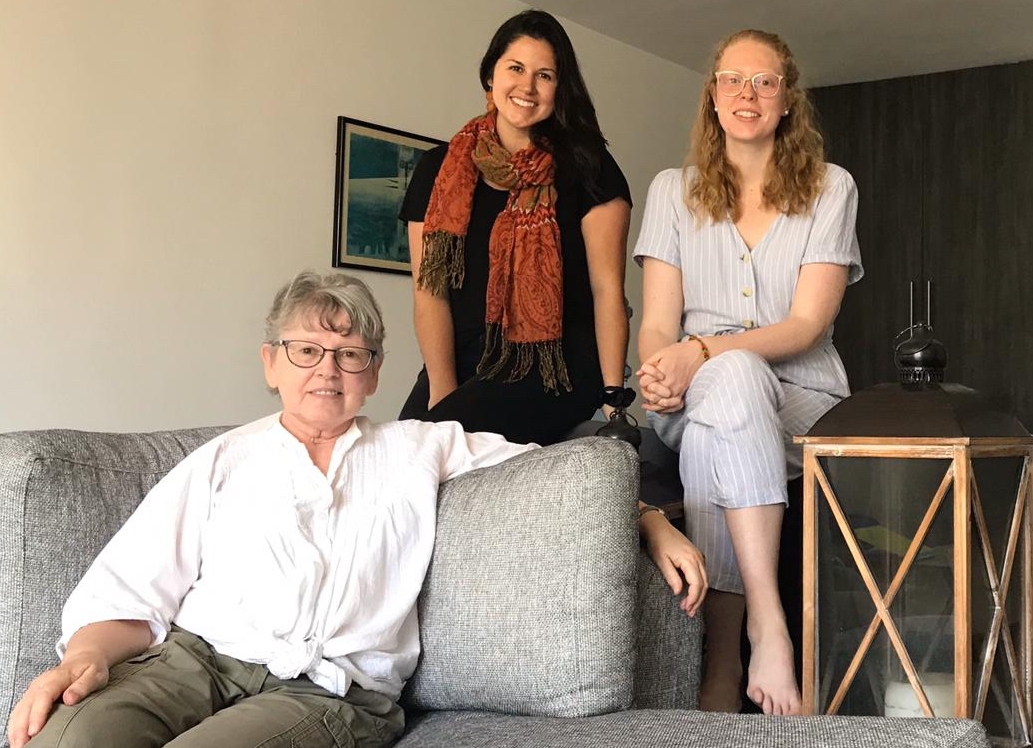 Indigo Christ desperately wants to come home to Halifax, but even more immediately, she wants to speak with someone from the Canadian embassy in Guatemala, or in Global Affairs Canada in Ottawa who can at least let her know what – if anything – is happening to help Canadians stuck in the Central American country get home.

Christ is stranded in Guatemala along with two other women, Laura Robinson from Rothsay, New Brunswick, and Lenora Yarkie from Edmonton. The three were working in Guatemala as cooperants with the Maritimes-Guatemala Breaking the Silence Network (BTS) that supports human rights and community development programs of partner organizations in Guatemala. They were working with communities in the south of the country that have been negatively affected by the controversial, Canadian-owned Escobal silver mine.

In a Whatsapp call today from the Airbnb where they are staying in Guatemala City, Christ told me that they have been trying since Tuesday this week to reach and speak with someone from the Canadian embassy or the Canadian government.

All their attempts have been in vain.

My media inquiry today to Global Affairs Canada about their case has not been answered yet, but an automatic reply included this information:

Christ told me that she and her companions have sent emails to that address, and called the emergency number, but have had no reply. Their calls to the Canadian embassy in Guatemala result in long waits on hold, and then automatic re-routing to a Government of Canada automated voicemail asking them to leave a message. But, Christ said, the time allocated for them to leave a message doesn’t even permit them time to say their full names.

Christ, who left Halifax on February 12, 2020, said that all three of them ensured they registered as Canadians abroad — or ROCA — and so should be receiving timely and regular ROCA updates on the situation. That hasn’t been the case.

Originally, Christ said, she was to have returned to Nova Scotia in May, but that with instructions coming from the federal government for Canadians to try to get home as soon as possible from abroad in the face of the COVID-19 crisis, BTS decided already on March 14 to bring the cooperants home early.

A BTS press release issued on March 20, explained what happened:

Despite facing booking challenges, BTS was able to secure flights for BTS Cooperants to leave Guatemala on March 17th. However, the day before they were supposed to leave, the Guatemalan government announced that the border would close for a period of two weeks in response to the COVID-19 pandemic. This decision resulted in a suspension of all land and airline travel in and out of Guatemala, leaving BTS staff and cooperants, as well as other Canadians stranded in Guatemala.

Christ said that on Friday, they learned yesterday via a closed Facebook group started for “Canadians stranded in Guatemala” — a page with 328 members — that some Canadians had managed to charter a plane that would be flying from Guatemala to Montreal as soon as the authorities gave it permission to leave. It was only later that the official Canadian Embassy Twitter account — @canembguatemala — sent out a message to that effect. By then, however, the flight was fully booked.

Christ doesn’t know if the plane ever managed to leave.

Meanwhile, she and the other two cooperants, as well as BTS staff in Guatemala and at home in Canada (BTS is housed in Tatamagouche, Nova Scotia) have been desperately trying to get in touch with embassy or government officials who can let them know if there are any negotiations underway with the Guatemalan government or airlines to try to arrange flights to bring Canadians home.

At a press conference today in Ottawa, Prime Minister Trudeau said that the government had arranged with Air Canada for a plane to bring Canadians back from Morocco, that the government was working on doing the same for people stuck in Peru and Spain, and that the same might be done for Canadians in other countries “as soon as possible.”

However, he admitted that not all Canadians abroad will be able to get home, and advised anyone stranded abroad to decide what was the safest option for their situation.

Christ told me that she and the other cooperants followed the prime minister’s press conference, and wondered what it meant for them. She said there is some discussion among other stranded Canadians on the Facebook page about trying to get a bus to Guatemala’s northern border, and then trying to cross into Mexico and find a direct flight to a Canadian destination from an airport in that country. But Christ and her colleagues are concerned about the many serious risks and uncertainties of such a trip.

For the time being, she said, they are managing okay and BTS is providing them with the support they need. They were last outside three days ago to stock up on food. But, she added, police are patrolling the streets of the Guatemalan capital.

So far, she believes, there are only 12 cases of COVID-19 in Guatemala.

Christ said her mother, who lives in Mabou, Cape Breton, is worried about her, but that, “I keep her cool.” She said she is also worried about the Guatemalan BTS staff who have concerns about being able to procure basic food and medicines as the COVID-19 pandemic spreads in the country.

Christ has written to her MP, Andy Fillmore, about the situation and is anxiously awaiting word back from him.

Since the closing of the borders by the Guatemalan government, our attempts to contact the Canadian Embassy in Guatemala to obtain support have been unsuccessful.

The BTS letter calls for the government to take several measures:

Canada must lead by example and simply cannot abandon its citizens abroad in the midst of one of the most acute global health crisis in recent history.

Sincere thanks for your patience. Apologies, I don’t have your original email but I am following up on your request regarding Canadians in Guatemala.

Global Affairs Canada is fully aware of the very stressful situation many Canadians abroad are currently facing as a result of the COVID-19 crisis. We are doing everything we can to provide assistance under these unprecedented circumstances. Minister Champagne has been in constant contact with representatives from airlines and his counterparts.

Our embassy in Guatemala continues to operate, and consular services continue to be provided to Canadians. We are doing everything in our power to bring the largest number of Canadians home as quickly as possible. Unfortunately, it will not be possible to ensure the return of all Canadians who wish to come home.

We would also like to remind Canadians that we have set up an Emergency Loan Program providing up to $5,000 to help those Canadians stuck abroad due to the pandemic. Due to the provisions of the Privacy Act, no further information on this individual case can be disclosed.

Canadians in need of emergency consular assistance from anywhere in the world can call the 24/7 Emergency Watch and Response Centre in Ottawa at +1 613-996-8885 (collect calls are accepted where available) or email [email protected].