You are here: Home / Commentary / Marc Garneau comes to Halifax to remind us that he’s not doing anything for passenger rail 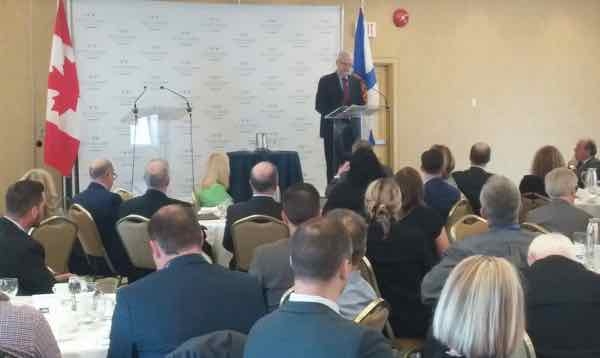 While provincial party leaders made their election pitches to Halifax Regional Council, federal transportation minister Marc Garneau was in town today telling Halifax Chamber of Commerce members (paying about $55 a head) all about his new Transportation Modernization Act (Bill C-49).

The bill begins the implementation phase of Garneau’s Transportation 2030 plan, which I wrote about back in November.

The bill aims to improve the experience of air travel for passengers with new regulations to introduce minimum compensations for bumping and cancellations, guaranteed seats for parents beside their kids, and better standards for handling musical instruments, among other things.

The bill aims to do a similar thing for users of Canada’s freight system, “ensuring a balance between requirements of shippers and railways,” said Garneau.

This, despite the ambitious vision for Transportation 2030:

Our vision is of a safe, secure, green, innovative and integrated transportation system that supports trade and economic growth, a cleaner environment and the well-being of Canada’s middle class.

[As a complete aside: why would a federal government vision single out the middle class? Is this just a giant F-U to the “lower class,” who clearly don’t need to get from A to B? Or maybe the federal government is just in denial that some of us are poor? Either way, it’s absurd.]

Despite the language of that vision, Garneau confirmed that there are no plans afoot to look at regulations or legislation that could give VIA a leg up in improving (or saving, as the case may be in the Maritimes) our passenger rail service.

It’s as if Garneau has forgotten why his own government is so supportive of urban public transit infrastructure projects, what with their ability to cut down on emissions and other down-the-line societal costs. And this is a far cry from two years ago when Garneau and his fellow Liberal MPs backed a VIA Rail Act put forward by the then-opposition NDP to beef up VIA’s stature as a crown corporation. (The bill was defeated by the Conservative government.)

And for Haligonians right now, VIA Rail’s rights over rail infrastructure (or complete lack thereof) stand to seriously impact our future transportation options, both for long and short haul trips.

We’ve already felt the effects of a rail network increasingly maintained for freight at the expense of passenger rail. The long distance Ocean service has been cut to three times per week, and despite a lack of resulting cost savings has not been restored. And so far, VIA’s efforts to bring regional passenger service to the Maritimes have been unfruitful. It has a plan, but hasn’t been able to negotiate access with CN.

Then there’s commuter rail. Despite the provincial party leaders telling Halifax Regional Council that they are non-committally supportive of commuter rail (with the exception of the NDP’s Gary Burrill, who committed to fund up to $5 million a year, or nearly 50 per cent of its operating costs) the sad truth is that CN has the keys to the tracks, and our best hope at getting access to them is, you guessed it, the negotiating power of VIA Rail.

Garneau’s new bill may (or may not) end up doing wonders for air travel in Canada, but for the “safe, secure, green” alternative of train travel, it draws a complete blank. Until the federal government can find a way to increase the legislated power of its own crown corporation, VIA Rail, passenger rail in the Maritimes will continue to dwindle, as will efforts to establish commuter rail.