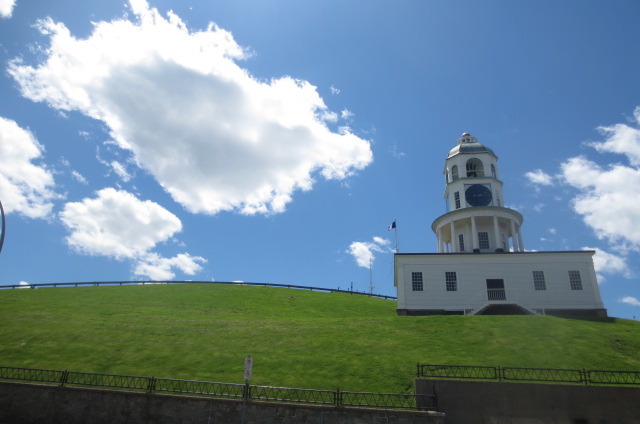 Citadel Hill is worth 10 bucks, says the federal government. The clock is extra. Photo: Rebecca Rose

Citadel Hill is worth $41.2 million, a federal panel has ruled.

The city and federal governments have been fighting over the value of the hill for decades because while the federal government, which owns the hill, doesn’t technically pay municipal property taxes, it does make “payments in lieu of taxes” to the city, which amounts to the same thing.

Recently, the federal government said the land in the National Park is worth $10—yes, ten dollars—while the land and the fort and other structures are worth $12.1 million, “but the federal Public Works Department argued it should be valued at a 70 percent discount because of the national historic site’s land restrictions, bringing Citadel Hill’s value down to about $3.6 million,” reports the Canadian Press.

For its part, the city put forward two appraisals, at $51 million and $68 million.

The panel split the difference, but the city got the larger slice. The panel’s ruling, however, is not legally binding; a final decision will be made by Public Works Minister Diane Finley.

These intergovernmental feuds can be infuriating for people looking in—the money paid to lawyers through the years must total in the hundreds of thousands of dollars, all to determine whether the money comes out of the taxes you pay to the federal government or the taxes you pay to the city government. But now that the tax feud is heading towards settlement, the governments should get to the issue that most affects people directly: Can we fix the damn sidewalks already? 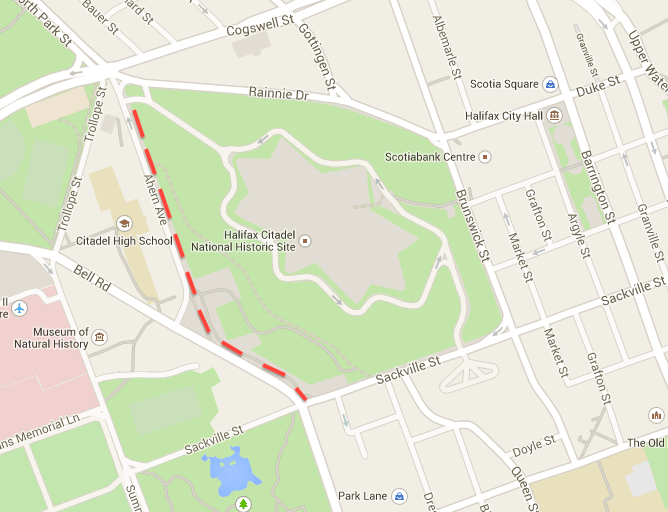 The sidewalks at the foot of the hill, along Bell Road and Ahern Avenue, are a mess. In the summer they are flooded and impassable. In the winter they are sheets of ice and a hazard. These sidewalks are the main pedestrian route around Citadel Hill from the south end. Thousands of people use them every day.

The problem is obvious: the runoff from the hill flows to the end of the slope, where it either pools or freezes. The solution is equally obvious: some combination of elevating the sidewalks and installing culverts under them is necessary. I jokingly say that four dudes with a pickup truck could solve the problem in a weekend; obviously more care than that is needed—it’ll require an engineering study and decent design to get a solution that’s both effective and attractive—but it will surely cost far less than the money already spent lining the pockets of government lawyers fighting each other.

Imagine if it was the adjoining roadways, public works for cars, that had been flooded and iced up. The city would’ve spent millions of dollars fixing the problem in the very first year. But because the sidewalks are public works for mere pedestrians, the problem has been left unaddressed for decades.

In terms of the transportation network on the peninsula, ignoring the sidewalks around Citadel Hill has been the single biggest failure of city government. Now that the tax dispute is winding down, there is no excuse: the flooding on the sidewalks needs to be addressed immediately.

Judge Bill Digby has dismissed charges the provincial Department of Environment had laid against the city for operation of the Otter Lake dump. Digby said there was no evidence that polluted water left the dump and made it into Nine Mile River. 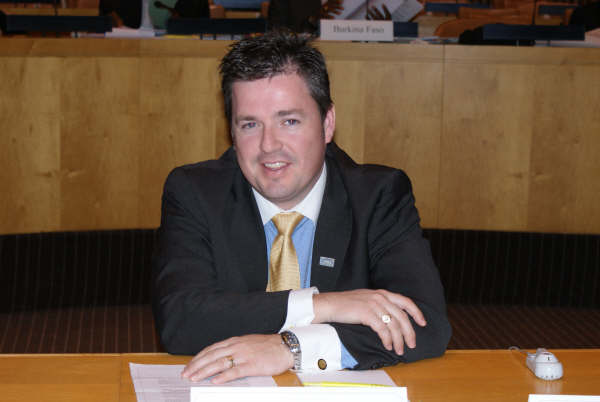 The opposition’s economic development critic, Chris d’Entremont, has called on the conflict of interest commissioner, Merlin Nunn, to investigate minister Michel Samson. “D’Entremont alleges Samson violated the act last Thursday because the minister was ‘not truthful or forthright to the public’ when responding to reporters’ questions about Nova Star Cruises,” reports the Canadian Press’ Michael MacDonald.

And yes, this was a lie. It was not, as Samson later claimed, a case of having “misspoken.” If we reporters can’t call lies lies, then we ought find another career. Samson lied.

Now Samson is producing a ridiculous justification for lying:

Defending his actions, Samson said he had planned to publicly disclose the spending, but not until he could make an announcement that included good news about the ferry’s pending operating schedule.

But when that good news failed to materialize, Samson instead revealed the information last Sunday when he issued an unrelated statement about a snafu with an audit of the ferry’s costs.

At first, Samson said he had misspoke last Thursday when responding to questions about the latest costs related to the ferry.

But he then explained that even though he had known about the additional spending since December, he chose to withhold that information until he had something good to say about the ferry.

With a straight face, Samson is saying that the political spin on the ferry is more important than the truth.

I don’t get the media obsession with the Christopher Phillips case. We have a man with a history of mental illness who was involved in some undefined domestic altercation. No one was hurt, he gave himself up peacefully, and there are some supposedly dangerous chemicals, but they injured no one and are being cleaned up. Far worse happens every day: people are attacked, injured, and killed by other people with ill intent using real weapons called guns. I say give Phillips and his family some space.

Still, imagine if Phillips had been named Mohammad.

Parker Donham zeroes in on the anti-apostrophe conspiracy:

Lately, the Anything Goes Linguistic Brigade has been demanding the total elimination of all apostrophes—no more pesky distinctions between “it’s” and “its,” “she’ll” and “shell,” or, tellingly, “he’ll” and “hell.” Time, Slate, and the Poynter Institute have all written about, but stopped short of endorsing, this anarchist campaign. There’s even a Kill-the-Apostrophe website, which good taste prevents me from linking to.

To such apostasy, Contrarian’s response is the same as it has always been to the reckless omission of the serial comma: Resist! Official, bureaucrat-inspired lists be damned! Keep using apostrophes in place names that obviously require them. Consider toting a sharpie for guerrilla sign-correction purposes.

Bruce Wark compares the reporting on John Baird’s reception in Ramallah provided by CBC Radio’s Derek Stoffel with the reporting of the same event by CBC TV’s Saša Petricic: 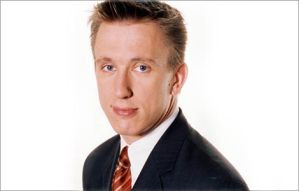 One of the weaknesses of reporting in mainstream media is the tendency to parrot what powerful officials say and to frame stories from their point of view while ignoring historical context and glossing over specific details.

CBC Radio’s account of the Palestinian protests against Baird is a good example. Derek Stoffel refers to the “Israeli-Palestinian conflict” as though it’s a bloodless, two-sided contest between equals. In his account, Israel and Canada are calling for peace talks while the Palestinians make a “provocative move,” pressing the International Criminal Court to investigate Israeli war crimes.

With the help of Petricic’s reporting, we see that Stoffel echoes Baird’s own words—“provocative and unilateral actions”—as Canada’s foreign affairs minister scolds the Palestinians for trying, in Petricic’s words, “to end the occupation through the UN and other bodies.”

There’s no mention in Stoffel’s reporting (or in Baird’s remarks) of the expanding Jewish settlements, while Petricic points out that Canada has long considered them illegal under international law.

So, why were Palestinian protesters pelting Baird’s convoy with eggs and shoes? Was it because, as Stoffel said, “they accuse Canada of blindly siding with Israel”? Or was Petricic closer to the truth when he reported that Palestinians “now see Canada as standing in the way of their statehood”?

Rachel Brighton, who has a long track record of supporting rural economic development efforts, says that the time may soon come to pull the plug on the Yarmouth ferry: 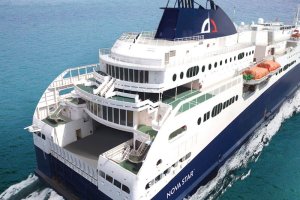 According to government estimates, visitors who came by the ferry last year spent $13 million while in the province, hardly justifying the $28.5 million sunk into the ferry so far, with more to come.

These upfront costs could be justified if the ferry became self-sustaining, perhaps with a modest annual contribution from the province.

But there is less incentive for Nova Star Cruises to run a better business so long as this government is content to write unlimited monthly cheques.

If the Canadian dollar stays low this tourism season and Nova Star Cruises still can’t entice enough American passengers aboard with their greater spending power, then it will be time to call it a day.

The Paris terrorists have unknowingly given help in fulfilling a prophecy from a God they despise and a Holy Bible they scorn by causing thousands of French Jews to declare aliyah (i.e. emigrate to Israel): “For I will restore them to their own land which I gave to their fathers.” (Jeremiah 16:15-16)

Constant persecution is driving Jews back to their biblical roots and to an inevitable future encounter with their God. 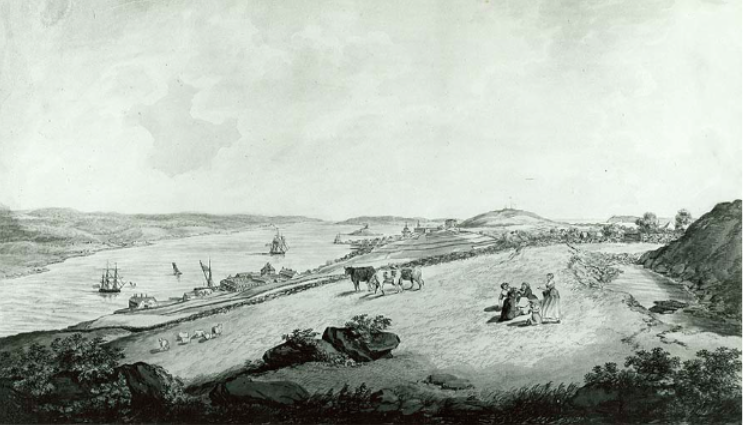 ca.1801, a photo of original aquatint by artist George I. Parkyns. Note the Naval yard on the left. Source: NS Archives 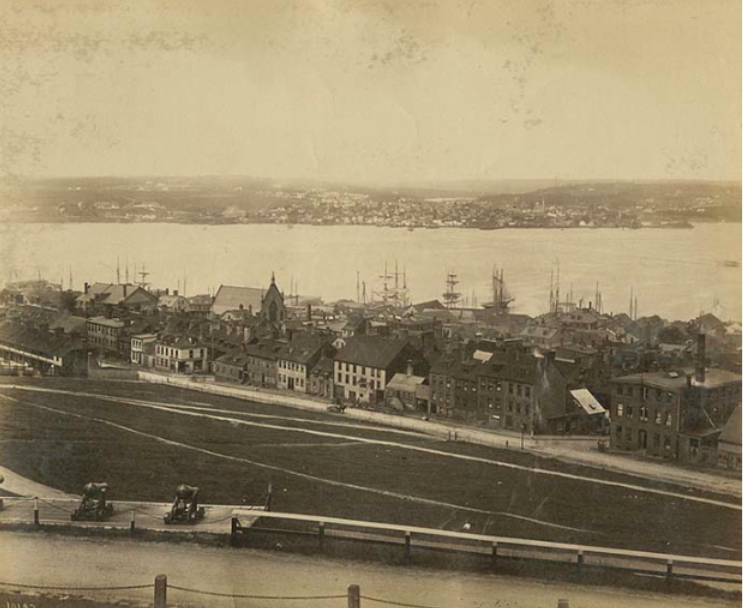 Unknown date, looking Northeast from Duke to Cogswell with Dartmouth in the background. Source: NS Archives 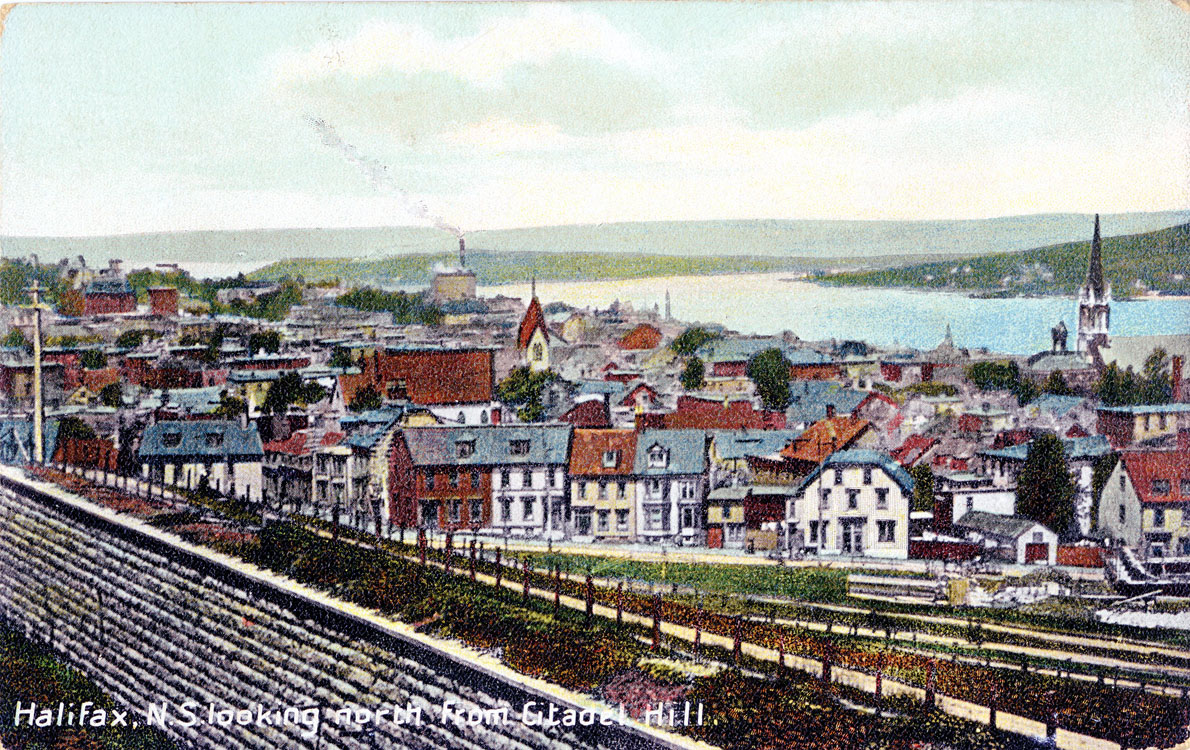 1909, roughly the same view as above. Source: Dalhousie Repository 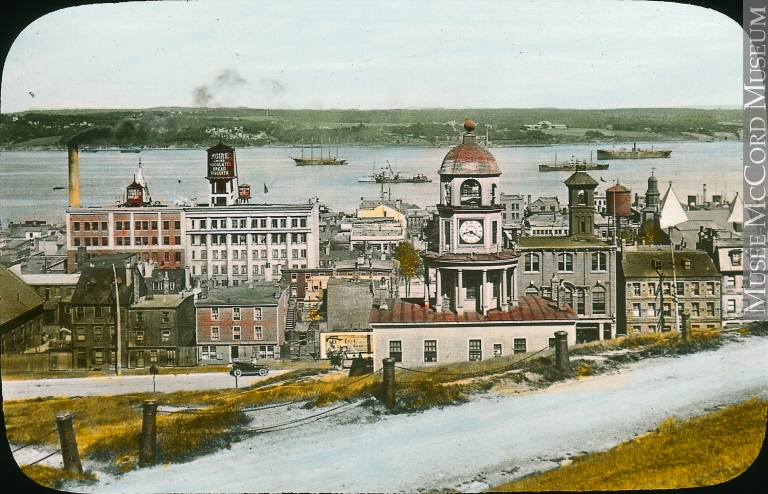 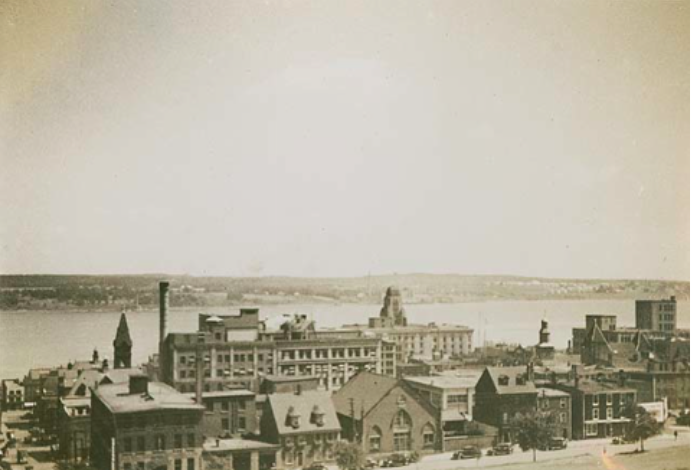 The Archives provides this explanation of the above photo:

D.C. Harvey,”From the Citadel” appeared in Port and Province, September 1937. The Provincial Archivist of Nova Scotia commented on the view from Citadel Hill and noted that at sunset and twilight “…the contrasting stimuli of land and water, hill and plain, tree and flower, barrack and university, church spire and brick warehouse, public building and private residence, all combine to produce a harmonious, if composite picture of Halifax as it was in 1749, as it is in 1936, and as it may be in the years to come.”

Harvey concluded his article with in a similar tone:

“The hopes and aspirations of the past have been recorded while the sun has set and twilight has gathered; but the ghostly projections of the future have become shrouded in darkness.” 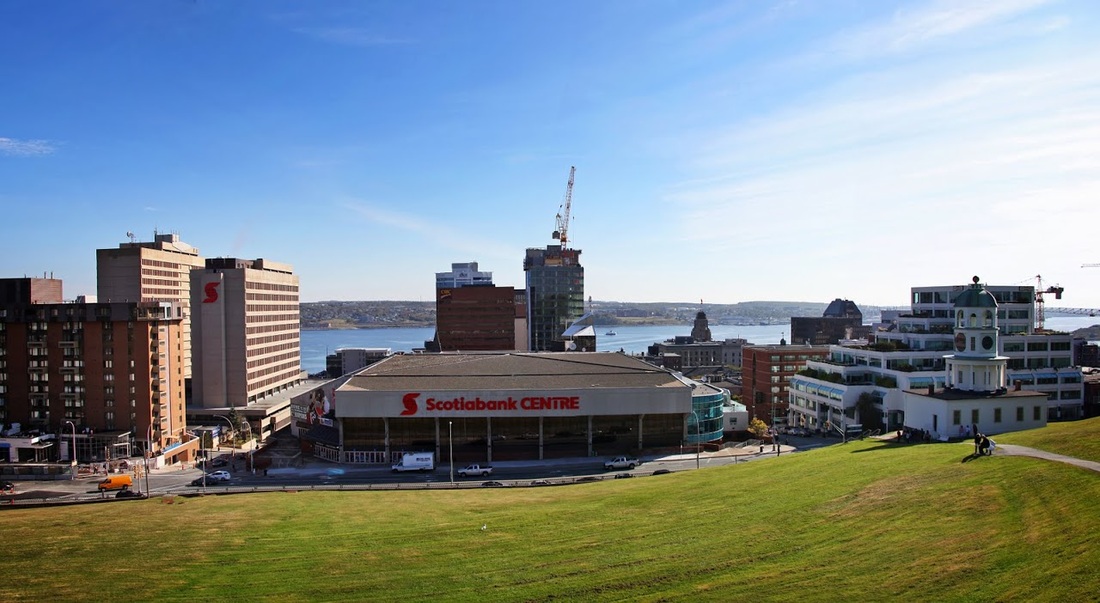 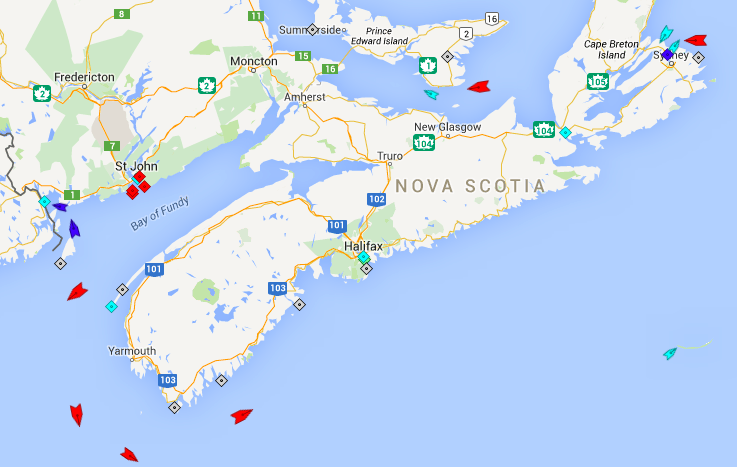 The seas around Nova Scotia, 8:30am Saturday. All those ships coloured red are oil tankers. Map: marinetraffi.com