“There are significant property, technology and construction challenges to constructing a daylight solution over the entire length of Sawmill Creek or over discreet (sic) sections,” declares a city staff report on daylighting the river.

Confusingly, the report calls the waterway “Sawmill Creek” but historically it was known as “Sawmill River.” Perhaps downgrading the nomenclature is a conscious decision to discount the importance of the stream.

The questions could include whether or not residents would like municipal funding to be used to construct a stadium. Other questions could include, but not be limited to: whether residents would like a performing arts centre, or sidewalk snow clearing to continue, and any other questions as deemed appropriate by council. The funding for this could be included in the next year’s budget. However, the exact questions to be used in a plebiscite do not have to be determined until June of 2016.

Well, maybe. But what is it that councillors are supposed to be doing, if not making such decisions themselves?

Someone stole the solar panels and a battery from a composting toilet on McNabs Island. 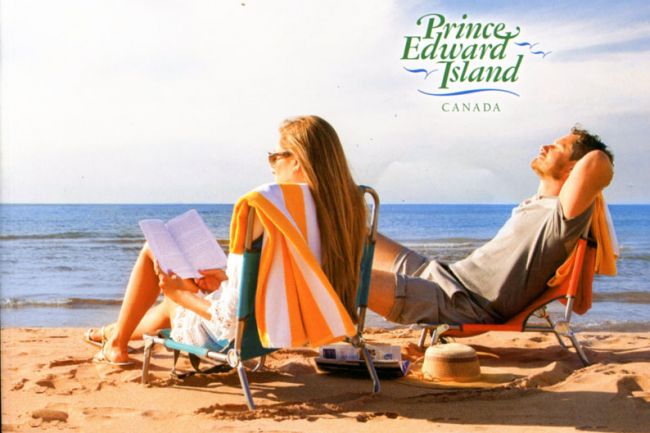 “The Government of P.E.I. was forced to quickly redesign their 2015 tourism guide after locals noticed that the booklet’s cover appears to feature a man with a visible erection,” reports the National Post.

The boner was the topic of conversation on Facebook, and then discussed by Charlottetown’s Guardian newspaper on Saturday. “By Sunday,” says the Post, “an online version of the guide had been rejigged to feature a cover image of a lighthouse. An earlier press release featuring government officials posing amid boxes of the new guide had apparently been deleted. The Prince Edward Island government has already printed 180,000 travel guides featuring the image, however, and their fate remains unclear.” 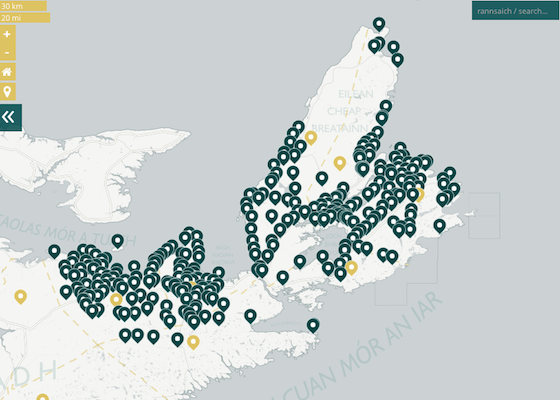 Parker Donham points us to Na Gàideheil Agus an Ainmeanàite an Albainn Nuaidh, an interactive map of Gaelic place names in Nova Scotia. Click on the icon and a little embedded audio recording comes up, and you can hear how to pronounce the Gaelic name.

But, writes Donham, “are these really the names Gaelic-speaking settlers used two centuries ago, or are they merely Gaelic translations of 20th Century English place names?”

Donham goes on to discuss the constructed history of Nova Scotia, largely influenced by Angus Macdonald. Seven or eight years ago, I think, Waye Mason wrote something very similar, but I can’t find it this morning. As I recall, Mason, like Donham today, cited folklorist Ian MacKay, who detailed the creation of Nova Scotia’s Scottish heritage in his book The Quest of the Folk: Antimodernism and Cultural Selection in Twentieth-Century Nova Scotia. Wrote MacKay (via Donham):

However, none of this evidence of Scottish settlement made Nova Scotia a “Scotland of the New World.” According to the 1921 census, the 148,000 Nova Scotians of “Scottish origin” represented just over 28 per cent of the provincial population of 523,837. They were outnumbered by 202,106 Nova Scotians of “English origin,” representing about 39 per cent of the total population. The remaining 173,731 Nova Scotians were assigned a wide range of “principal origins” by the census: Irish, French (i.e. Acadian), German, Black, “Indians,” and others. Not only was Nova Scotia not predominantly Scottish, but it was also not the most Scottish of Canadian provinces: Prince Edward Islanders of Scottish origin accounted for a larger percentage of their province’s population; 465,400 Ontarians of Scottish origin were about three times more numerous than those of Nova Scotia….

But by happenstance Gus Reed made me aware of the 1861 census this weekend (see next item), and I started flipping through it. Early on, the census takers relate the national origins of the populace:

In 1861, 45 per cent of Nova Scotians who were born elsewhere claimed Scottish origin, but in 1921, 28 per cent of the entire population claimed Scottish ancestery. MacKay formed his thesis around the latter figure, but surely the earlier figure is more important for any discussion of “origins,” no?

I’m not arguing against MacKay — in fact, as we’ll see presently, I agree with his most important finding about demographics — but our past myth-making is part of our current myth-making. History is not some concrete artifact, once identified unchanged forever except by further details found through better and better microscopes. Rather, history is a modern endeavour, as people today continually rejig the past for their own purposes.

I think that’s right, but we seem to want to consciously delude ourselves by missing the most important cultural influence of our past.

I’m reminded of the Drum! event, which announces that it is celebrating Nova Scotia’s four founding cultures:

Before the Tall Ships came, there were the drums of the Mi’kmaq…

Then came the others. Displaced people all, carrying their faith and their music as holy relics of their homelands, so far away.

First the French, who settled and farmed…

North from the Thirteen Colonies and the Caribbean came the black settlers, twice dispossessed, weaving tales of African sun into the raw rhythms of the winter wind…

And the Mi’kmaq watched as their land was transformed by these exiles from faraway lands.

This “origins” game is a lot of fun — I play it myself, with my Quebecois (on my father’s side) and Irish (and a bit of German we all ignore, on my mother’s side) roots. But let’s not kid ourselves. Nova Scotia was an English enterprise, and the Gaelic and Acadian and all the rest just give local colour.

I guess a festival focused on Morris dancing would be rather boring, but we can’t talk about “culture” without talking about the political, economic, and above all military aspects of society. And in those regards, this place is unmistakably English.

“The 1861 Census of Nova Scotia, available on-line, is a goldmine of information about our province 150 years ago,” writes Gus Reed. “In 330 pages, Honourables Archibald, McCully and Annand leave nothing uncounted or unsummed. Lunatics, Lutherans, Boats, Oats, Alewives, Widows — you name it and it’s enumerated, and accurately totaled.” 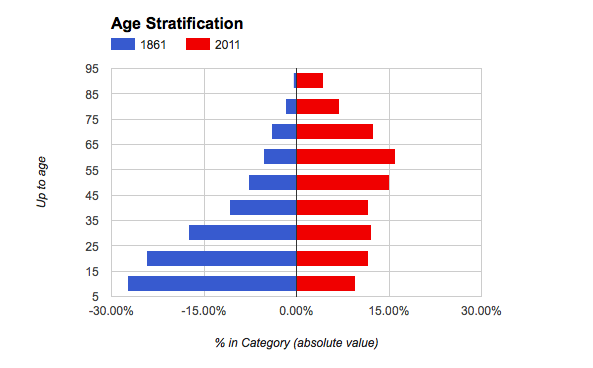 Reed has exhaustively sliced and diced the data, coming up with all variety of charts to better understand it. Be sure to also catch “70 ways to die.”

3. Outstanding Citizen Living with a Disability

Speaking of Reed, he also tells me that the James McGregor Stewart Society has created an annual award to recognize an outstanding citizen living with a disability. The organization’s press release:

The Community Foundation of Nova Scotia is pleased to announce the launch of the James McGregor Stewart Award to recognize the achievement of a Nova Scotian living with a disability. The Award is named for James McGregor Stewart who overcame many barriers, despite a reliance on crutches throughout his life as a result of childhood polio. Mr. Stewart was a founder of one of Atlantic Canada’s leading law firms, Stewart McKelvey.

The Fund was established by friends of the James McGregor Stewart Society to recognize Nova Scotians living with a disability for their leadership, personal accomplishment or effective advocacy.

The Award recipient will be selected through a nomination process and nominees will evaluated for determination and achievement in conquering personal or externally imposed boundaries, with emphasis on leadership, personal excellence and advocacy.

The Award of $1,000.00 will be presented annually on June 30, the anniversary of the birth date of James McGregor Stewart.

The Community Foundation of Nova Scotia works with funders to make smart and caring investments in communities and people; we enable effective philanthropy. To learn more about this award and the others supported by the CFNS, please visit the website at www.cfns.ca

“This generation,” writes John DeMont, “is redefining geezerdom…Which is why I would like to suggest a rethink of the whole ‘an older Nova Scotia is a doomed Nova Scotia;’ as self-serving as that might be coming from a man sitting smack dab in the middle of the baby boomer demographic.”

Public consultation meeting (7pm, Halifax Forum, Maritime Hall)—plans for a five-storey building at the corner of Chebucto Road and Beech Street will be presented. 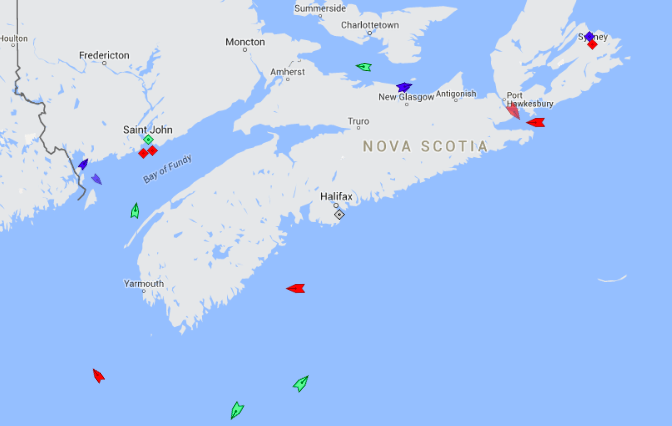 The seas off Nova Scotia, 8:20am Monday. Map: marinetraffic.com