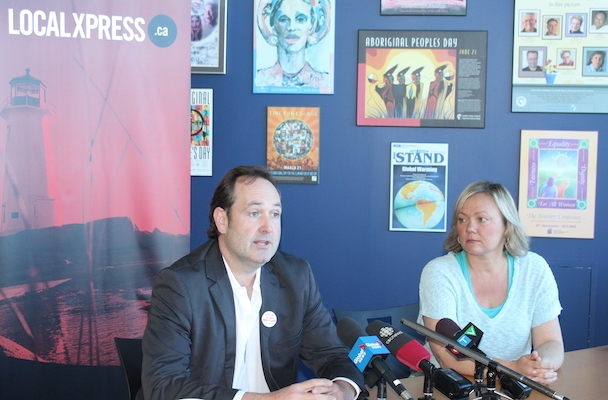 The national news is content purchased from the Canadian Press. Other content will be produced locally by journalists represented by the union.

Asked how many stories will appear on the site daily, HTU president Ingrid Bulmer said she couldn’t say. “There are some challenges publishing with only 57 employees,” she said.

Revenue will be generated via two avenues: advertising and a crowd sourcing campaign. Advertising rates listed in the site’s media kit start as low as $15 per thousand impressions.

Local Xpress has also started a Patreon campaign to raise money through donations.

O’Hanlon said the money raised will be used to further expand the site. None of the raised money will be used to pay journalists, who continue to receive remuneration through the strike fund.

There has been no negotiation with the Chronicle Herald, said O’Hanlon. The union has repeatedly offered to come back to the negotiating table, but the company’s owner demand “complete capitulation,” he said.

The union offered a five per cent wage cut among other concessions, and has hinted at a willingness to offer more, but Herald president Mark Lever has declined to talk.

Last week, the head of Mediation Services of Nova Scotia approached the union, and the union agreed to meet with the mediator next week. There’s no word if Lever or his representatives will attend.

The point of the expanded Local Xpress, said O’Hanlon, is to demonstrate “far superior content” than is being produced by scab reporters at the Chronicle Herald. The contrast between the two publications will cause readership and advertising at the Chronicle Herald to drop to the point that the company will have to negotiate, he said.

O’Hanlon pointed at last Monday’s edition of the Chronicle Herald, which he said had only three ads in the entire paper. “We’re saying to advertisers, ‘Come and give money to Local Xpress.'”

Lever’s antagonistic approach to the union is “incredibly self-destructive,” said O’Hanlon. “It’s like a ketchup company declaring war on tomatoes.”

Still, “if there’s a deal [with the Chronicle Herald], we’ll shut down the publication [Local Xpress],” said O’Hanlon.

O’Hanlon said it appeared the strike at the Herald could “go on indefinitely,” but the union is committing to supporting the strikers for as long as it takes to reach a deal. Strike pay comes via the international CWA union, which is a multi-billion dollar organization.

The longest newspaper strike in Canadian history was the two-year strike by journalists at the Journal de Montréal, which lasted from 2009 to 2011. The Chronicle Herald strike is now in its fourth month.