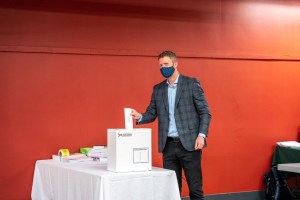 On Friday, Liberal leader Iain Rankin unveiled his party’s housing and anti-racism initiatives. If re-elected, Rankin said his government would forgive the provincial portion of the HST for developers who build affordable housing.

The plan also includes financial help for renters who are “renovicted” when the owner of the building decides to upgrade. Rankin said with a new mandate, tenants will be eligible for compensation from the landlord who would hand out a cheque equal to one month’s rent for every year (up to a maximum of six years) the tenant has lived in the building.*

Rankin also promised to set up a fund that non-profit groups could access to purchase existing housing when buildings come up for sale.

“The pandemic has shown the importance of providing all Nova Scotians with equal opportunities for economic success, but also reiterated the need to reflect on emerging issues of social justice,” said Rankin in a written introduction to his party’s plan to improve living conditions for people who are struggling.

“A re-elected Liberal Government will continue our dedicated efforts to make life more affordable and equitable for all Nova Scotians while investing in families, reducing poverty, and tackling racism.”

The plan claims the Rankin government has already committed to spending $105 million over the next three years to build more affordable housing in partnership with Ottawa. The province has allocated $12 million to deal with homelessness.

One of the plan’s promises to tackle poverty includes introducing a school lunch program at a cost of $3 million a year for children in grades primary to six. According to the plan:

The Healthy Lunches for Healthy Kids program will provide healthy, locally sourced, low-cost lunches, ensuring children in elementary schools are well nourished and prepared to succeed in the classroom. The average cost per lunch will be $5 a day. The program will use a pay-what-you-can model and will be first launched in communities demonstrating the highest need.

This pilot program builds on a breakfast program already in most schools and $35 million added to the provincial budget this year — an election year — to provide $100 a month more to each adult on income assistance.

The Liberals’ plan also includes a number of initiatives aimed at eliminating racism. Among them is a new $500,000 promise to reserve and fund seats for 25 African Nova Scotian undergraduate students at the School For Social Work at Dalhousie University starting in 2022. This complements an earlier $4.8 million announcement to create an African Nova Scotia Justice Institute and $3 million to settle land title claims in five traditional Black communities.

The plan also promises to work with the Acadian community to develop new legislation “to complement” the existing Education Act.

A re-elected Liberal government is also promising to introduce legislation that recognizes Mi’kmaq language as Nova Scotia’s original language and to provide money to preserve and encourage people to learn the language.