You are here: Home / Featured / Liberals roll out environmental platform 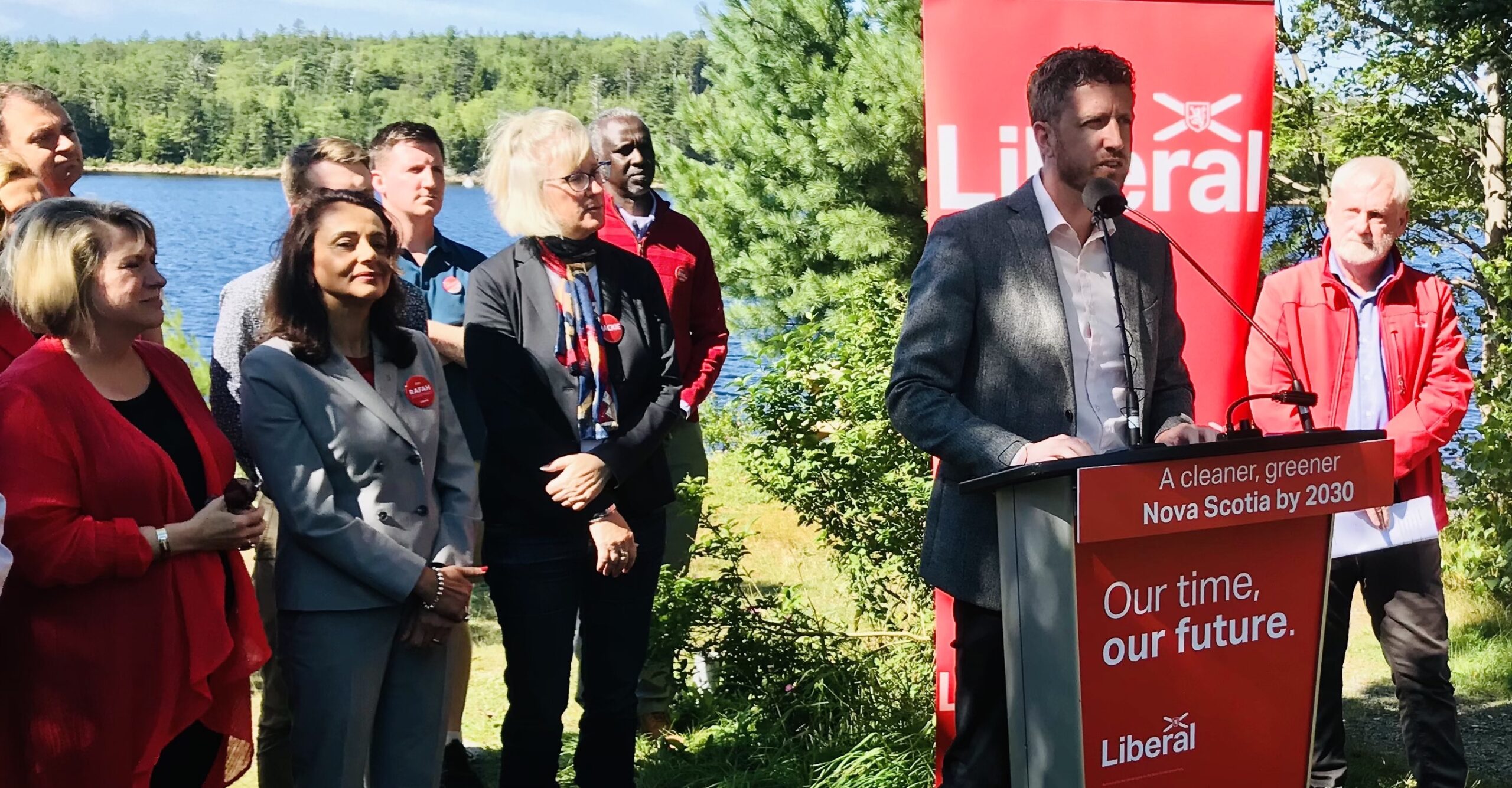 Liberal leader Iain Rankin yesterday introduced a plan to protect the environment worth an estimated $173 million over four years. Some of the measures have been previously announced. Others — such as committing $15 million dollars for provincial parks to repair damage caused by storms or upgrade facilities — are new. Here is a breakdown of the spending promises:

Many of these initiatives are also contained in the NDP’s “Something Better for Nova Scotia” document, which came out two weeks ago.

Rankin said the money to finance these changes will come from the province’s Green Fund, which collects money by selling carbon credits to companies that pollute by exceeding the cap on emissions. The Liberals say they expect the Green Fund to deliver $50 million this year after the cap-and-trade auctions.

Rankin said the key to the province’s economic recovery hinges on transitioning away from coal-fired power plants to renewable fuels that emit less carbon or Greenhouse Gas (GHG) emissions.

Rankin said he is “hopeful” an agreement can be reached late this year among the power companies, Atlantic provinces, Quebec, and the federal government that will permit a new transmission line to be built between New Brunswick and Quebec to deliver more hydro power.

Unless the so-called “Atlantic Loop” goes ahead, the CEO of Emera, Nova Scotia Power’s parent company, has warned it will be very difficult to replace coal-fired plants prior to 2040 without seeing the price of electricity skyrocket. The Atlantic Loop is supported by the latest audit of Nova Scotia Power, as well as by the renewable energy coordinator with the Ecology Action Centre (EAC) in Halifax.

“To get NS off coal successfully, we must ensure at least 90% of our electricity comes from renewable energy by 2030, and the EAC has successfully modelled this pathway,” said Gurprasad Gurumurthy. “In addition, large scale biomass must not be considered as renewable energy as it is not carbon neutral. Lastly, the concept of the Atlantic Loop needs a clearly defined roadmap and must move beyond mere discussions.”

Last month, the Liberals accused PCs of having no credible plan for protecting the environment. “[PC Leader Tim] Houston has failed to show leadership on the environment. It is a pattern of his,” said a Liberal news release.

Based on what has been put forward in their “Solutions for the Environment” document, the $7.4 million a Houston government said it would spend seems big on buzzwords and skinny on details.

“A PC government would Introduce the Enviro Goals and Climate Change Reduction Act, a new, ambitious bill that will identify and showcase Nova Scotia as a world leader in adopting green energy measures and following climate-friendly sustainable development,” reads the document.

The PC platform includes no firm targets for cutting greenhouse gas emissions. It does, however, commit to generating 80% of Nova Scotia’s electricity from renewable sources by 2030 (the Liberals use the same target, the NDP promises 90%). The PC document does not spell out any plan for how to get there.

By contrast, the Liberal government issued a Request For Proposals in June for 350 megawatts of renewable energy that can be sourced from traditional wind farms, solar panels, or potentially, offshore wind and tidal. This major procurement aims to provide 10% of the electricity Nova Scotians use today. Rankin said this decision will stimulate up to $550 million in spending and create 4,000 jobs over four years, mostly in rural Nova Scotia. How this pans out will be worth watching with first contracts expected to be awarded late this year.

Does Rankin walk the walk? 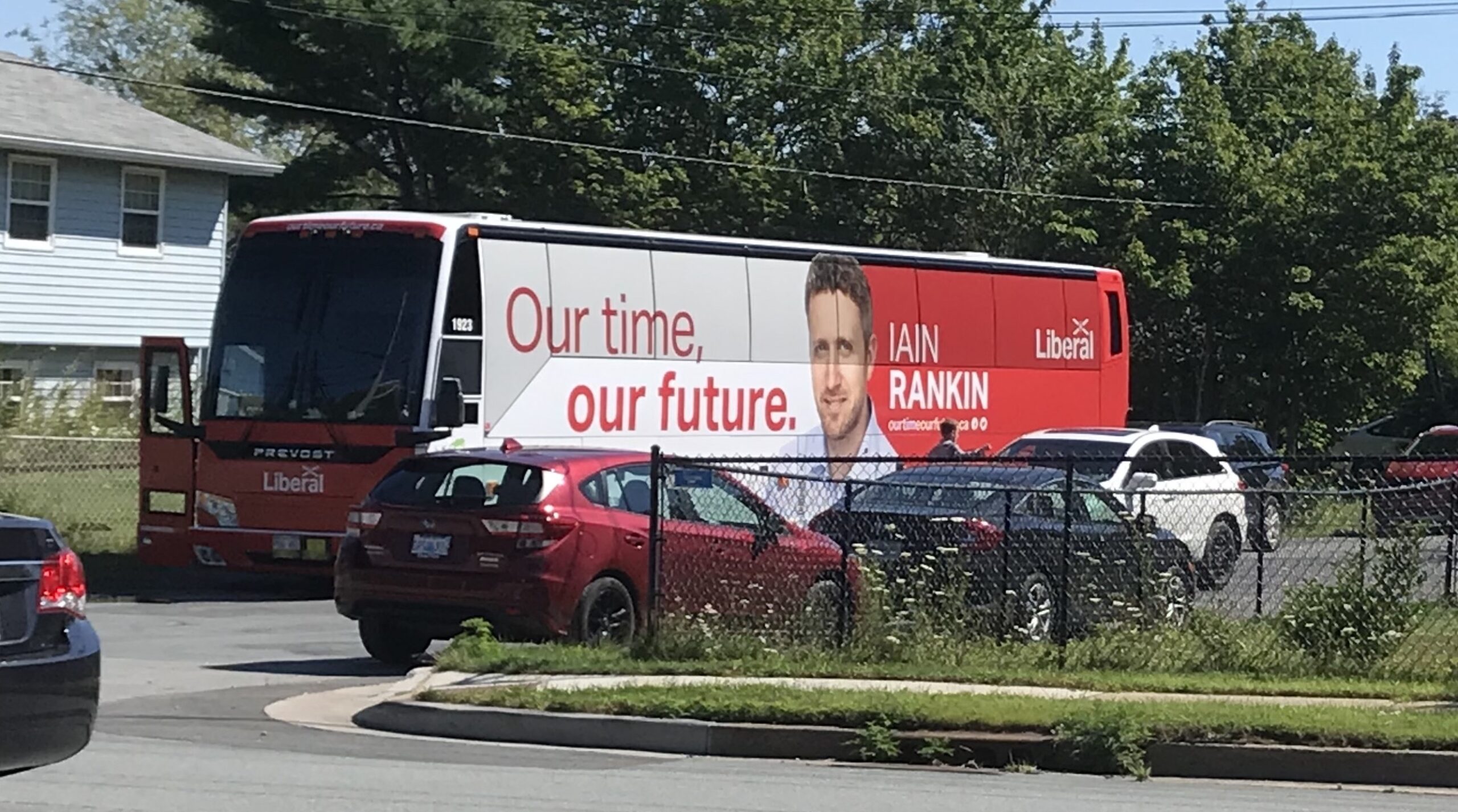 The Liberal bus was too big to get into the Long Lake Provincial Park parking lot. Photo: Jennifer Henderson

At yesterday’s Liberal announcement held at Long Lake Provincial Park in Spryfield, King’s South Liberal candidate and former Environment Minister Keith Irving sang Rankin’s praises, describing him as “a champion of the environment.” But environmental groups have criticized Rankin for failing to “walk the walk” when he was minister of Environment for two years and premier for five months.

Rankin was unable to save Owls Head Provincial Park from being delisted as potential protected place. He gutted the Biodiversity Act.

Asked by the Halifax Examiner if he would change the renewable electricity regulations to halt the cutting of trees and burning of wood to generate electricity, Rankin passed the buck.

“There will always be people who want us to go further and I respect that,” said Rankin. “We have an achievable plan. I have set clear ambitions for more renewable energy, from mostly wind and solar. The NDP and past governments have made decisions around biomass that are challenging to remove without having an adverse impact on a critical industry like forestry.”

And there you have it. Forestry trumps climate change.

Last spring, shortly after Northern Pulp laid off workers, the McNeil government quietly amended the renewable electricity regulations to allow the Emera-owned biomass plant in Brooklyn to operate, despite the fact the cost to ratepayers could be as much as $10 million a year extra. That Liberal amendment is good until the end of 2022, unless a political party chooses to change it.

The rationale stated by the minister at the time, Derek Mombourquette, was that clean hydro from Muskrat Falls was once again delayed. But the real agenda appears to have been to keep people working in the woods. Rankin once again declined to commit to a moratorium on clearcutting Crown land until the recommendations from the Lahey Report — delivered three years ago — are in place.

“One of the most important recommendations is the new Forest Management Guide, which will be implemented this fall,” said Rankin, “and that will essentially eliminate clearcutting as we know it today on the majority of the landscape — apart from the land designated as High Production, which will still include clearcutting. We don’t know what percentage of crown land will be designated High Production but it will be smallest part of the three zones in the triad.”

Groups such as the Health Forestry Coalition, which have been asking for a moratorium to protect forests and habitat for birds and animals, will be disappointed. During the three years since the Lahey report came out and in the two years prior, the Coalition claimed it has been business as usual for forestry companies working against the clock.

The PC platform of the environment also makes no commitment to stop the burning of biomass to generate electricity, even though trees are valuable storehouses for carbon.

NDP leader Gary Burrill said if elected, his party will invest $40 million a year in building 1,000 units of affordable housing over the four-year mandate.

“Iain Rankin’s housing scheme, released last week, will build only 400 new housing units in the next three years,” said Burrill while campaigning in Fairview. “This is at a time when over 50% of Nova Scotians can’t afford the average rent for a bachelor apartment on a single income.”

Burrill has previously promised an NDP government would rescind or take back a $70 million a year tax break to large corporations passed by the previous government.

“Voting NDP means permanent rent control and 1,000 new affordable housing units, which will be created by investing in publicly owned, co-operative, and non-profit housing. Real people need solutions that will help them now”.

PC leader Tim Houston started his day in Brookfield, Colchester County, at the arena built and maintained by that rural community. Houston announced a new Rink Sustainability Fund that will help with maintenance and repairs for 81 arenas that depend on support from municipalities and receive very little from the province. Houston also promised that if a PC government is elected, every family will receive a yearly Kids Activity tax credit worth $500 per child to support their enrolment in sports or arts programs.

“We know that cash is tight. Nova Scotians are seeing the prices of everything rise, from rent to gas to groceries. They can use a little help,” said Dave Ritcey, PC Candidate in Truro–Bible Hill–Millbrook–Salmon River and former president and board chair of the Maritime Junior A Hockey League. “The Kids Activity Tax Credit will get kids away from their screens and back to the rink or the ballpark, help families financially, while kids benefit mentally and physically.”

The three leaders will meet and make their pitches to voters during the second and last televised debate tomorrow night on CTV.

The Green Party also has an environmental platform, promising to:
● immediately declare a climate emergency, focusing all government departments on climate change as a priority.
● reduce the province’s GHG emissions by 70% below 2005 levels by 2030 and achieve a net-zero carbon economy by 2045  (The NDP set 58% and Liberals 53% targets)
● require that all of Nova Scotia’s electricity would come from carbon-neutral sources by 2030
● end all provincial subsidies to fossil fuel sectors

The Greens have nominated 43 candidates in 55 ridings.