You are here: Home / Featured / Liberals refuse to allow opposition parties to question bureaucrats responsible for the privacy breach

The two researchers, Emma Hoffman and Tony Walker, were the lead authors of a 2017 ambient air study, which revealed that air levels of three volatile organic compounds (VOCs) near the Northern Pulp mill exceeded cancer risk thresholds and “are of primary health concern in terms of population risk.”

Pannozzo attempted to interview the researchers but both declined to speak, citing “ongoing consultations” with the Boat Harbour Remediation Project, which is overseen by Nova Scotia Lands.

Through documents she received from a Freedom of Information request, Pannozzo found that just as the air pollution study was published, the Boat Harbour Environmental Advisory Management Committee discussed “Public Communications” which are “Sensitive at current time and will continue until strategy is finalized.”

“Message control, in whatever form it takes, always has its beneficiaries,” notes Pannozzo:

In the case of the ambient air study, the study authors’ silence certainly reduces, if not eliminates the possibility of inconvenient questions arising about Northern Pulp’s cancer-causing air emissions. Indeed, there isn’t a single news outlet in this province (other than The Halifax Examiner) that has reported on it, likely because the authors wouldn’t agree to speak about it.

Who benefits from this silence?  Take a wild guess. 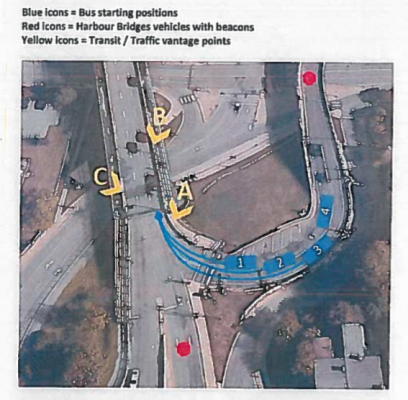 At issue was whether the city’s transit buses can safely navigate the turn from the ramp onto the Macdonald bridge, and if not, whether changes could be made to the traffic flow to make that safe turn possible.

And so one Wednesday afternoon last fall, the ramp was closed to other traffic and four buses were assigned to test the curve. The results were mixed, partly because one driver screwed up the assignment.

Still, it looks like buses can use the ramp — or at least will be able to, once minor changes are made. The problem, however, is that all the various components of transit planning in the the area — the Gottingen Street transit lane, the lack of a transit lane in the Cogswell plan, and the bridge ramp design — are happening in isolation from each other.

“It’s all a bit of a house of cards, with each piece of infrastructure highly dependant on the next,” writes Butler. “And this is why projects like the Cogswell redesign and the Gottingen bus lane simply must fit into a larger plan, and not just focus on the relatively small area that they seem to directly impact.”

Click here to read “What’s wrong with the Barrington Street bridge ramp, and can we fix it?”

The Examiner is about to embark on two very large — and very costly — projects. (You’ll likely learn about one of those tomorrow or Monday.) So, if you’ve been thinking about subscribing but have never quite got around to it, this would be a good time to join.

“Two people were killed in a single-vehicle crash on Highway 103 between Tantallon and Hubbards on Wednesday,” reports the Chronicle Herald:

Another suffered “serious or life-threatening injures,” according to Staff Sgt. Bruce Briers with the Nova Scotia RCMP.

A fourth person was also hurt but those injuries are not believed to be life-threatening, he said.

The vehicle was a black pickup truck, reports the CBC.

As of 9am, the RCMP hasn’t yet issued a release about the incident.

“Members of the Liberal government blocked attempts on Wednesday to call Internal Services Department officials to testify about the breach of the freedom-of-information website in front of a public committee,” reports Michael Gorman for the CBC:

Following the weekly scheduled hearing of the legislature’s public accounts committee, MLAs were asked to approve a list of seven topics for future debate. One of those was to have officials from the Internal Services Department testify about supplier contracts related to the breach of the freedom-of-information portal.

That didn’t sit well with Liberal MLAs, who hold a majority on the committee. Clare-Digby MLA Gordon Wilson called it “preemptive” to discuss the matter until Auditor General Michael Pickup completes his work on the matter.

“This committee is not beholden to the auditor general’s schedule.”

The so-called “privacy breach” is an issue of major public concern. It is entirely appropriate that the opposition question the government about it — indeed, that questioning is necessary if we are ever to fully understand what happened and why.

It’s been evident from the start that the government has been attempting to misdirect attention and cover up its responsibilities — with the premier himself shifting blame by rhetorically convicting a teenager for “stealing” information left on a public-facing provincial website. Now, the same government won’t allow the necessary public questioning of the bureaucrats overseeing the computer system.

“More than 1,000 Nova Scotia government employees who opted for a long-service award payout have been advised their money is coming Thursday,” reports Jean Laroche for the CBC:

But because of an error sending the email, hundreds of their colleagues also know they may be flush with cash this coming payday.

I don’t know that this is truly a privacy breach — the salaries of all provincial employees making more than $25,000 are reported on the province’s Public Accounts webpage, so the payouts would be a matter of easily accessible public record anyway.

But it’s annoying to get an email with a gazillion addresses in the “to” list. It’s astonishing how many people don’t know how to use bcc.

Tutton goes on to explore important issues related to police oversight boards, and how Cacchione is already functioning.

The great weather couldn’t last long, could it?