People have been locked into a psychiatric ward at the Nova Scotia Hospital for “no medical or legal reason,” says lawyer Vince Calderhead.

The complainants in this four-year-old human rights complaint are two intellectually disabled adults (a third complainant died) who spent most of their adult lives locked up in Emerald Hall — a ward of the Nova Scotia Hospital. The unit is a place for people who have been diagnosed with both a disability and a mental illness. Over the years it’s been the focus of complaints of physical abuse filed by family members on behalf of residents and grievances by unions on behalf of staff. Despite its violent reputation, nine people with high needs continue to live at Emerald Hall today.

“Our submission is Beth [MacLean, one of his clients] is someone who was institutionalized for nearly her whole life needlessly,” says Vince Calderhead, the lawyer for the complainants. “There was no medical or legal reason for being locked on a psychiatric ward except she wasn’t offered a suitable community placement.”

“The federal government has quietly given a subsidiary of East Coast business giant J.D. Irving Ltd. more than $40 million in funding that an expert says could have trade implications for the New Brunswick firm,” reports Brett Bundale for the Canadian Press:

However, records obtained by The Canadian Press through an access-to-information request show that the company, which makes gypsum wallboard products commonly called drywall, has not been required to repay at least $35 million.

[A]n economics expert says the federal agency used “murky language” by calling the money conditionally repayable to describe what is effectively a subsidy.

Ian McAllister, who headed the regional development unit of the federal Finance Department in the early 1970s, questioned whether it was a manoeuvre to skirt trade rules.

“It’s what I might call deliberate obscurity to try to not break the rules,” said the retired Dalhousie University economics professor. “ACOA and the Irvings may not want clarity because it then puts them in a confrontational situation with the U.S. government.”

“[G]iven the massive outcry over the loss of the [Cornwallis] statue as heritage, let me suggest a number of actual pieces of history that are being mishandled by various levels of government, and in many cases literally falling apart from neglect and in need of public outcry,” writes Peter Ziobrowski:

• In the neighborhood of Cornwallis Park, the Elmwood hotel needs the protection of the delayed Barrington South Heritage conservation district
• The Dennis Building sits empty and risks Facadism
• Georges Island is being neglected by the federal government
• York Redoubt’s WW2 defenses are crumbling
• Point Pleasant Park’s WW2 forts are falling into the ocean
• the Khyber is crumbling
• Lighthouses are being neglected EVERYWHERE
• CSS Acadia is rusting away in the harbour
• Two heritage buildings at Bloomfield are falling apart
• McNabs Island is being neglected by DNR
• Young Avenue is being slowly destroyed
• Schmidtville is facing development pressure
• Getting a Dartmouth heritage museum (really the entire city needs a proper museum)
• Better access to local archives (they’re in Burnside)
• Getting federal tax credits for heritage buildings (private members bill was voted down by the Liberal majority)
• Changes to the Province’s Heritage Act to disallow, as of right, demolitions of registered structures 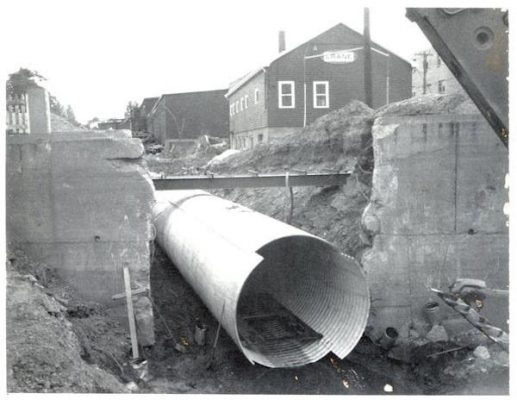 Sawmill River being placed underground in the 1970s.

Part of Sawmill River has been “daylighted” — brought above ground. I live nearby but haven’t had the time to take a look. I’ll drop by today and take some photos.

But now let’s daylight other streams. It upset me that Northbrook wasn’t at least partially daylighted when the Old Mill was torn down and replaced with the new Sobeys on Wyse Road. 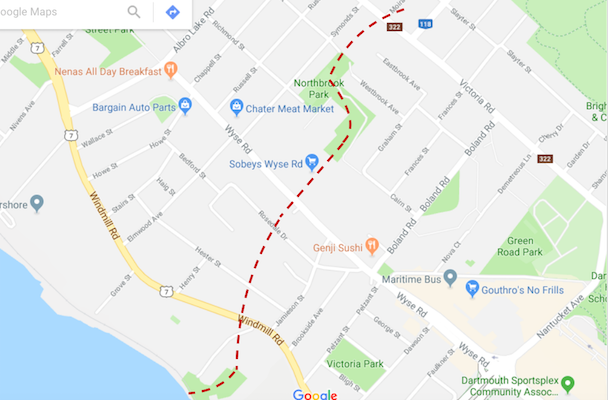 That creek is still above ground through the appropriately named Northbrook Park to the east, and at Crathorne Park to the west. In between, and under the railroad tracks next to the harbour, the stream is in a pipe, but you can still follow its old course through the neighbourhood by noting the contours in the land. I suspect that the above-ground sections are only part of the flow, as the creek was once so powerful that it powered industrial uses along it — hence the Old Mill, but also (I believe) a boot manufacturer downstream.

Fat Apollo remembers the stream when he was a kid:

It was daylighted, plus the bible chapel has illegally paved over part of it. As a kid, I used to climb under Victoria Rd in it and catch frogs and eels in it. It lead to a lake where the park is now

There’s also an  underground stream flowing from Albro Lake to the harbour. I don’t know the name of this stream, but as with Northbrook, part of it is still above ground through Farrell Street and Yetter Parks.

On the Halifax side of the harbour, there is Freshwater Brook, which once wound its way (roughly) from the North Common, to the Holy Cross Cemetery, down Fenwick Street and the bottom land by the Sobeys on Queen Street, then out to the harbour. There was even a bridge on Barrington Street. Freshwater Brook is now underground and serves as a combined storm and sewage pipe for most of the south end. We missed the opportunity to daylight Freshwater Brook during Harbour Solutions.

There’s at least one other buried stream on the peninsula — the stream that flowed down what is now Joseph Howe Boulevard to the Northwest Arm. But there must be others I’m unaware of.

There are lots of reasons to daylight creeks, but for me the best reason is that seeing the streams above ground helps reconnect us to our natural environment. We are just leeching off that environment, and our big urban projects can’t make the streams disappear forever; they just get shuffled around in pipes until one day they become somebody’s problem — like for example, when Freshwater Brook popped up above and flooded the parking garage of the apartment building at Barrington and Inglis Streets. Actually seeing the streams flowing above ground helps us to understand that we can’t really tame nature, not forever anyway.

Community Services (Tuesday, 10am, One Government Place) — the committee will discuss the Nova Scotia Advisory Council on the Status of Women.

Public Accounts (Wednesday, 9am, Province House) — the committee will be asking Service Nova Scotia about “Service Modernization and Access Centres.” Maybe someone can ask how come they don’t have an Access Nova Scotia on the peninsula or downtown Dartmouth, and so everyone who lives downtown has gotta take crappy bus service way out to the suburbs.

THE PIPER, BY COLLEEN MURPHY DIRECTED BY PAMELA HALSTEAD

The town council of Hamelin is a self-absorbed corporate tyranny. It exploits its underclass — rats who dream of becoming human — and it ignores the anguish of its children, who still believe in love. Tensions are already building when change arrives in the form of the mysterious Piper, with whom the Mayor’s daughter falls in love. When the Piper aids the council in their war against the rats, the transformative powers of his magical music will change their world forever. Colleen Murphy’s re-imagining of the tale of the Pied Piper of Hamelin is wildly funny but also stages the anger and sorrow of a society that needs to be reinvented at its core.​

In 1989, at age 26, Canadian citizen Derek Twyman was sentenced to 160 years in a U.S. prison for a spate of non-violent burglaries in North Carolina. Join Twyman at the Schulich School of Law at Dalhousie University to hear his story about being released from prison early, in 2017, after serving nearly 30 years — and find out how some Schulich School of Law alumni, faculty, and students helped bring about his release.

Trump is a fascist, ya know. This should concern us more than it does, I think.