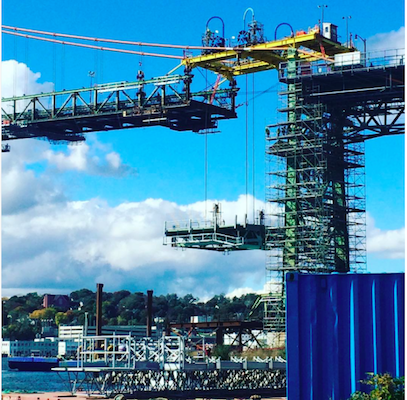 The first replacement deck segment for the Macdonald Bridge reconstruction project was installed yesterday, but evidently there are some problems — the Bridge Commission is saying the bridge won’t reopen until at least 9:30am.

The only thing worse for the morning commute would be if it were snowing….. rut-roh.

2. One dead in Beaver Bank crash 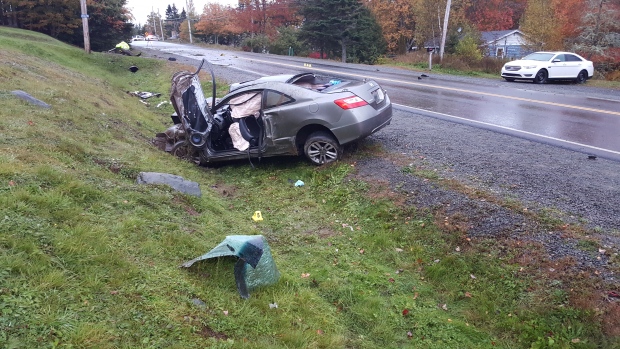 A 21-year-old man is dead and three other young adults have been sent to hospital after a car crash near the 2028 block of Beaverbank Rd., Beaverbank on Sunday morning.

RCMP were called to the scene of the single-vehicle crash at approximately 1:30 a.m. Preliminary investigation has revealed that a Honda Civic with four occupants left the roadway. Two women were ejected during the crash and are presently at hospital with serious injuries. The driver is also at hospital with injuries sustained in the crash.

A 21-year-old passenger from Beaver Bank was pronounced dead at the scene.

Police say an investigation into the cause of the crash continues and alcohol is believed to be a factor in the crash.

A police release from Friday:

On October 15 at approximatley 7:25 p.m., police responded to a vehicle/pedestrian collision in the 6100 block of Young Street. A 69-year-old woman was crossing the road, not in a crosswalk, when she was hit by a car that was travelling westbound on Young Street. She suffered non-life threatening injuries and was transported to hospital by EHS as a precaution.

The pedestrian was issued a summary offence ticket under section 125 (5) of the Motor Vehicle Act for pedestrian crossing roadway outside of crosswalk zone failing to yield to traffic.

A police release from Sunday:

On October 17 at 7 p.m., a 62-year-old female pedestrian was struck by a car as she crossed Oxford Street at Quinpool Road. She was transported to hospital by EHS with what are believed to be non-life threatening injuries.The 19-year-old male driver of the car was issued a ticket for failing to yield to a pedestrian in a crosswalk.

Via Metro, from yesterday:

A 21-year-old woman sustained minor injuries when she was hit by a car while in a marked crosswalk late Sunday afternoon in Lower Sackville.

The woman was crossing at the intersection of First Lake Drive and Metropolitan Avenue at about 3 p.m. when the vehicle turned left and struck her in the leg, Halifax RCMP said in a news release.

Police and paramedics responded to the call, with the woman treated and released on scene.

Officers issued the 72-year-old man behind the wheel a summary offence ticket for failing to yield to a pedestrian in a crosswalk, which carries a fine of $693.95 along with four driver’s licence demerit points upon conviction, RCMP said in the release. 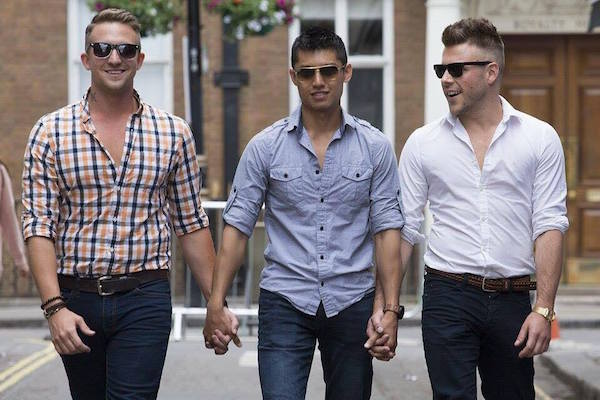 This isn’t really news, but it appears in the Daily Mail, so it’ll be re-reported a gazillion times locally. The photo above appeared on Shayne Curran’s Facebook page on August 5, so it looks legit:

Two married men have revealed how they got a divorce just one year after tying the knot – so they could include a third man in their relationship.

Adam Grant and Shayne Curran, from Nova Scotia, Canada, said ‘I do’ in 2011 after dating for more than two years.

We’ve got the best nightclubs. 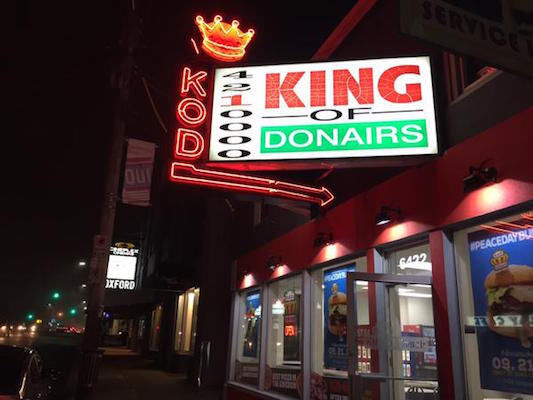 Linda Mosher wants to declare our world-class donairs as the official city food because doing so will cause the tourists to flock to Halifax; they can eat donairs while checking out the blocked view of the Explosion.

Yea, you know, I get it — it’s a college ritual to close the bars and soak up the alcohol with donairs, and who am I to rain on the parade? But the donair is inherently anti-democratic. What horrors has this King of Donairs inflicted upon the masses? It’s perversely ironic that the elected city council will discuss bestowing honours on a street meat monarch the day after a federal election. Have you no decency, Linda Mosher?

I’m not supporting naming the donair the city food until there is a revolution and the peasants open The People’s Donair. 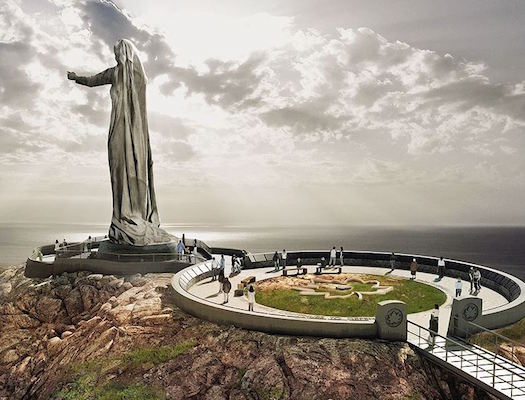 It is dismaying to see two of the newest honorary patrons of the Never Forgotten National Memorial, local labour representatives Bob Burchell and Gerard Boudreau, repeat (doubtless sincerely) some of the least convincing arguments in favour of building ‘Mother Canada’ [™] at Green Cove, while ignoring the most compelling case against the location (‘I think it’s a worthwhile project,’ Cape Breton Post, Oct. 14).

The memorial, both men argue, is not only a worthy tribute to the noble sacrifice of Canada’s war dead, it is likely to act as a major tourist-magnet. The proposed design, however, widely criticized and rightly ridiculed for its gargantuan, ironically ‘over the top’ quality, is also overtly jingoistic and propagandistic, founded on the historically absurd proposition that the inglorious, industrialized carnage of the ‘Great War’ somehow made Canada great, saw the ‘birth of a nation.’

What it saw (to the heartbreak of union leaders like Keir Hardie, a Lanarkshire miner who founded the British Labour Party) was the pointless death of millions of workers around the world, sent by their bosses to attack each other not for the greater good of class emancipation but its racist opposite, Empire.

‘Mother Canada’ [™] has been championed by Prime Minister Stephen Harper, former Defence and Justice Minister Peter MacKay, and other leading Conservatives for a reason: it literally embodies, sets in stone, a series of useful, brainwashing lies about the biggest misadventure in this country’s complex history.

Nor has any serious, independent study been conducted into the potential of the project to generate jobs and lure tourists. Many current visitors to Green Cove, we know from messages received from across Canada and beyond, will be repelled rather than attracted, and not return; once the concrete is poured, obviously the many student and science study trips to Green Cove will stop; and the site’s sublime character, important to many cultures for many reasons, will be effaced forever, a desecration perversely dressed as reverence.

Tellingly, neither Burchell nor Boudreau attempt to reconcile the construction of the statue with the destruction of the Cove, or the core mandate of Parks Canada to preserve the ‘ecological integrity’ of the lands in its care. The project’s key proponents, from the PM down, care as little for that mandate as they do about historic fact and accuracy. For them, patriotism requires and implies propaganda. It’s up to the rest of us not to fall for it.

Racism is Killing Us Softly (Monday, 6pm, Room 1108, Mona Campbell Building) — The book Still Fighting for Change: Black Social Workers in Canada will be discussed, and some of the 20 authors will read from their respective chapters. 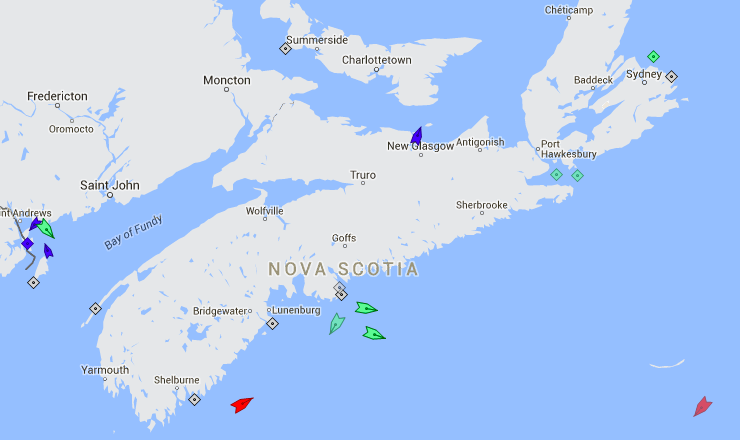 I’ve examined all the party platforms, looked at the strengths and weaknesses of the candidates, considered the strategic voting websites… and now I’ve made up my mind: I’m voting for Kodos. 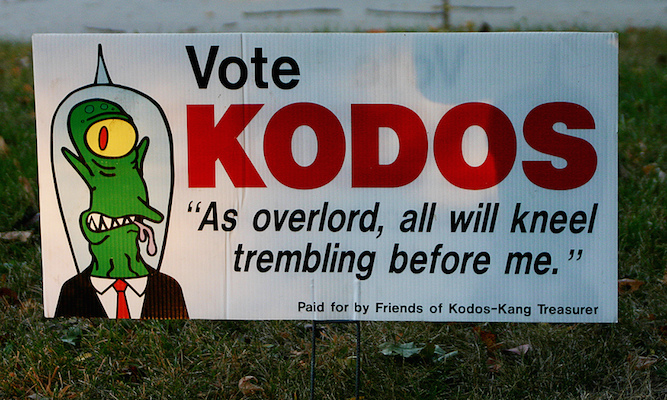