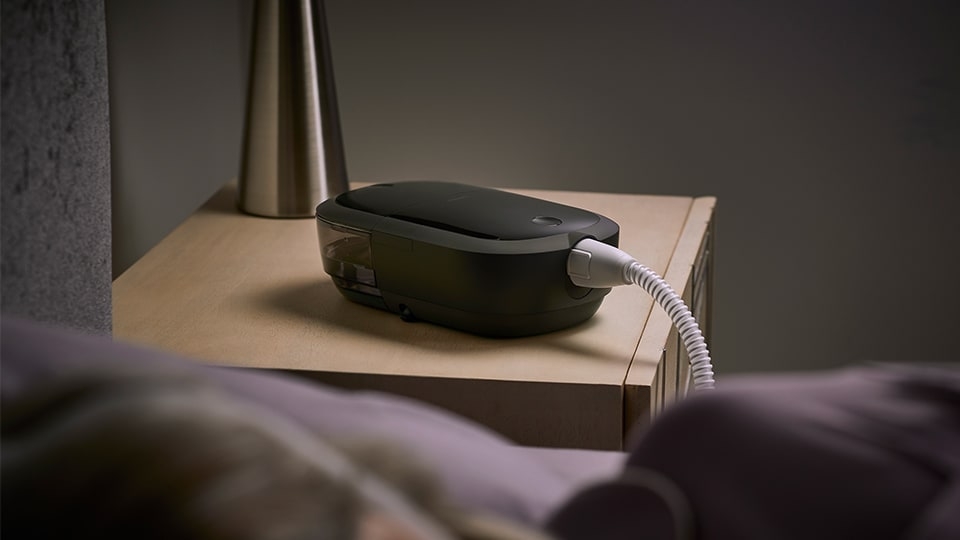 The dream of a good night’s rest has turned into a nightmare for thousands of people who suffer from a problem known as sleep apnea.

On June 23, Health Canada issued a product recall of Philips DreamStation ventilators, which are designed to correct the health issue. Obstructive sleep apnea is a potentially serious disorder in which breathing repeatedly stops and starts. Symptoms include heavy snoring though the night and extreme fatigue during the day. Left untreated, it can predispose a person to heart attacks and strokes.

Philips Respironics, which manufactures the DreamStations, has told customers such as John Uhlman that it will “replace or repair their existing machine,, but so far, no action has been taken. That’s according to Uhlman and information provided to the Halifax Examiner by The Snore Shop, a retailer that used to sell Philips’ products.

The trigger for the recall is a type of foam used to muffle noise from the machine. The manufacturer found the ventilator can emit toxic chemicals that can be inhaled or ingested by those using it.

“I’m on a waiting list,” said Uhlman, a Sackville resident who has purchased four Dream Stations over the past 20 years to deal with his severe sleep apnea. “They said it could take up to 12 months to get one, but I’ll probably be dead before I get anything from Philips.”

Uhlman said for him, buying a ventilator is a life-or-death decision and he can’t sleep without one. He went out immediately after the June 23 recall and purchased a competing product called ResMed at a cost of $2,200. Since then, CPAP (Continuous Positive Airway Pressure) and BiPaP (Bi-level Airway positive Pressure) ventilators, which keep air flowing continuously while people sleep, have been in high demand and short supply at many Nova Scotia retailers.

Treating sleep apnea is big business. The machines sell for $2,000- $2,500. Philips Respironics has sold an estimated three to four million units since 1985, according to a statement of claim filed in a Newfoundland court last week.

That claim launches a potential national class action lawsuit against Philips Canada and Royal Philips (the Dutch parent company) on behalf of consumers who bought various Philips branded machines. (You can find a full list of the devices and a link to the website of the law firm representing Philips customers here.)

Bob Buckingham is the lawyer taking the manufacturer to court. He’s best known for having successfully pursued financial compensation from the Catholic Church for male survivors of sexual abuse at the Mount Cashel orphanage in Newfoundland during the 1990s. The trigger for this lawsuit was a recall in the United States. Here’s how Buckingham describes the case on his website:

On June 14, 2021, Philips Respironics issued a recall notice in the US for approximately 35 models of its Respiratory Devices that were manufactured with a Polyester-Based Polyurethane (PE-PUR) sound abatement foam. Exposure to the PE-PUR foam can have adverse health effects including, but not limited to, increased cancer risk, respiratory damage, asthma, kidney and liver function, nausea, vomiting, skin rash, and headache.

The first whiff of concern emerged April 26, 2021 when Philips made a “regulatory update” in its first quarter report to its shareholders. Philips said it had determined “from user reports and testing there are possible risks related to the sound abatement foam used in certain sleep and respiratory care devices.” Philips said the majority of the affected devices were first-generation Dream Station products.

Its statement went on to say the “foam may degrade under certain circumstances, influenced by factors including use of unapproved cleaning methods, such as ozone, and certain environmental conditions involving high humidity and temperature.”

The owners of Philips machines were advised to clean them weekly, and retailers of the machines used to sell a product called SoClean, containing ozone, to assist with that task. It has since been removed from the stores. One Dream Station owner says his retailer recommends Johnson’s Head to Toe wash for delicate skin as a safer alternative.

The statement of claim filed by Buckingham notes that Philips did not warn its Canadian customers about potential health risks associated with the foam but left it up to social media and retailers to communicate that information. Health Canada issued a product recall nine days after the one in the U.S. Here’s part of Health Canada’s statement last June:

The results of testing performed by Philips indicate that the PE-PUR sound abatement foam used in these devices may emit certain chemicals. Our investigation to date indicates that this emission occurs during initial operation and may possibly continue throughout the device’s useful life. These issues impact all device product platforms manufactured with Polyester Polyurethane    (PE-PUR) sound abatement foam.

The Halifax Examiner has asked Health Canada to provide an update on that investigation to help people who feel caught between the risk of using a ventilator with a known defect and the risk of having their heart stop because they can’t breathe properly while asleep.

* Update: The Examiner asked Health Canada the following questions. Below are the answers we received from spokesperson, André Gagnon:

Examiner: Can you provide an example of a cleaning product containing ozone that might have been used to clean these devices?

The following Class II medical devices use ozone and are licensed for use on Positive Airway Pressure (PAP) equipment:

A listing of all licensed Class II, III and IV medical devices is available at www.mdall.ca

Health Canada has indicated in the Respironics recall to not use ozone cleaning equipment, such as the devices listed above, with the impacted Respironics devices.

Examiner: When you issued the recall June 23 2021, an accompanying statement from Health Canada said  “our investigation to date indicates this emission of chemicals occurs during the initial operation and may possibly continue throughout the devices useful life.” What else Health Canada has learned about these devices? Do you know whether emissions are likely/probable to continue during the “useful life” of the device?

The Department is working with the manufacturer to assess the potential health risks that led to this recall, including those related to the potential for foam degradation and Volatile Organic Compounds emissions. While the evidence Health Canada has received to date suggests that the risk to patients appears to be low when the devices are used and replaced according to the manufacturer’s directions, Health Canada is continuing to work with the manufacturer to verify that appropriate measures or corrective actions are in place.

At this time, Health Canada is advising users of the affected devices to consult their physician or medical device provider first before stopping or changing how they use the device.

Health Canada is monitoring the Philips recall and the availability of devices in Canada. If additional products or safety concerns are identified, Health Canada will take appropriate action and inform Canadians.

Of the three lead plaintiffs named in the lawsuit, two are from Newfoundland and one is from Nova Scotia.

Ian Johnson of Halifax was advised to discontinue the use of his Dream Station and within days of the recall was able to purchase a competing product at his own expense. He is seeking medical treatment for a skin rash and having tests on his lungs and kidneys. Newfoundland resident Michael Kehoe is seeking specialist medical care for cancerous cells found in his ear.

The civil action is seeking financial compensation for plaintiffs who have had to replace their machines and have experienced stress and suffering associated with the product recall. It also asks the court to impose punitive damages on Philips for marketing a product as “safe” for many years without testing to make sure that was an accurate statement. No date has been set to appear before a judge to certify the case. For more information and a complete list of the products on recall, here are the links.