You are here: Home / Featured / Lands, forests, oceans, and more

I’m Philip Moscovitch filling in for Tim, who was sitting by a campfire last night. On Twitter I’m @PhilMoscovitch. 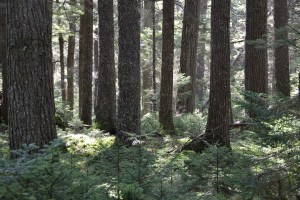 Bill Lahey’s prescription was sweeping: “We need a new paradigm to manage our forests.”

That’s what the University of King’s College president told journalists after handing the McNeil government the results of a year-long review of forestry practices in Nova Scotia. McNeil appointed Lahey last August after choosing not to implement key recommendations of the 2011 Natural Resources Strategy: reduce clearcutting by 50 per cent and ban the practice of full-tree harvesting.

Lahey, a lawyer and a former deputy Environment minister, said that even if his 45 recommendations result “in the contraction of the industry” and the closure of a mill because wood supply drops, his top priority must be to “protect ecosystems and biodiversity.”

Click here to read “The Lahey Review of Forest Practices is published; what does it mean?”

I live in a semi-rural area, and my family owns about 28 acres, most of which is wooded. Several years ago, a local forestry company asked us about clearcutting it (almost 90 per cent of cutting on private lands is clearcutting) but we declined. I understand that people want to control what happens on their own properties, but I don’t get the deep-seated notion that because a woodlot is privately owned, we need to throw up our hands and forget about what happens on it.

The province does have regulations when it comes to buffer zones for watercourses, on private as well as public land. From what I gather, Lahey is hoping well-managed Crown lands will set an example for private woodlot owners, but he doesn’t exclude the possibility of legislation as well.

2. Conversations about Cornwallis and more in new play

Elapultiek runs from Aug. 23 to Sept. 1, and centres around the relationship between an Indigenous woman and a non-Indigenous man as they wrestle with their very different views of the world.

Their conversations explore the legacy of residential schools and what to do with statues, like the one of Edward Cornwallis, which was eventually taken down from a Halifax park.

“We’re learning about, first of all, that we do need to talk about these things and that we can survive a conversation, even the most difficult conversations,” said playwright and ecologist Shalan Joudry, who lives and works in Bear River First Nation.

The play takes place around a campfire. Ken Schwartz, artistic director of the Two Planks and a Passion theatre company, which is staging the production, says this is the first time the company has commissioned a play by a Mi’kmaw writer:

“It’s our failure,” said artistic director Ken Schwartz. “That’s what it is, and in all of these kinds of issues, the reason it took so long is because we didn’t do what we should.”

3. Whale rescuer should have had protection 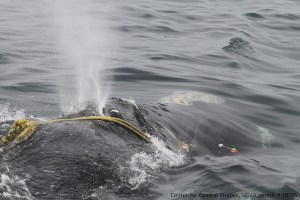 Right whale #1142 taking a breath at the surface, just as the arrow approaches the entangling rope around her upper jaw. Center for Coastal Studies, NOAA permit #18786.

Howlett, who died last July after being hit by the tail of an entangled right whale he had freed, was on a vessel belonging to the Department of Fisheries and Oceans at the time, and the report says he should have been given protective headgear, Donkin writes.

The report criticizes the federal government for not having “an effective national policy on whale rescue,” an issue that members of Howlett’s Campobello Whale Rescue Team highlighted after the death of their friend.

“DFO controls who can approach whales in Canadian waters by the exclusive jurisdiction in the permits and licences that they issue,” the report says.

“They have a duty of care to their employees, the NGO volunteers, and to the whales that are entangled in fishing gear that depend on these persons.”

If you want to read more about Howlett and the people who risk their lives to save whales, read this excellent longform piece by Chelsea Murray in The Deep.

The games’ opening keynote speech was by former Olympian Waneek Horn-Miller, from Kahnawake, outside Montreal.

Growing up in a single-parent home, her mother, Kahn-Tineta Horn, moved to Ottawa and lived across the street from a local YMCA to get regular pool time. They rented out rooms to help pay the bills and slept on a pullout couch.

In 1990 at the age of 14, Horn-Miller was on the frontlines of the Oka Crisis. On the final day of the crisis, she was stabbed in the chest by a soldier during an altercation and nearly died.

In high school, she began to play water polo and was a university champion in the sport at Carleton University, where she was named female athlete of the year three consecutive years (1994-97), a first at the school. She’s competed at a number of North American Indigenous Games as well, winning 20 gold medals from 1990-97.

PSA: if you ignore the signs at Peggys Cove, you risk not only your (kids') lives but having your video widely circulated on Nova Scotia twitter, in a bad way. https://t.co/2aRdJfx3yS

Yesterday, people were still talking about that video from Peggy’s Cove showing a dad at the edge of the black rocks, his kids’ feet close to (and at one point in) the water, while a woman — presumably the mum — stood behind them shooting a video.

I live near Peggy’s Cove. Two of my kids work there part-time. I go to the Cove quite a bit. I don’t know what to make of this.

Calling these people idiots doesn’t help, and saying they deserve it if they die is callous and unhelpful. Clearly, there are signs, and clearly people ignore them.

I find the old-fashioned sign saying “injury and death have rewarded careless sight-seers” confusing. But a review of safety at the Cove after a 2015 drowning saw the addition of more signs. It is hard to miss them.

I do think it is a problem that the signs are all in English. We get a ton of tourists from Quebec, for instance. I’m sure someone has data on what languages tourists most commonly speak, and I don’t think having signs in those languages is a bad idea.

But I suspect what’s going on here is partly the result of a) people not wanting to be told what to do and b) having been conditioned to ignoring warning signs, figuring they are just there not because there is a real danger, but because they serve as cover in the event of a lawsuit.

The signs are huge, yellow and feature graphics as well as text. You can't get to the lighthouse from the parking lot without passing several.

I've warned people many times. In every case they've seen the signs but think the warnings aren't real #cantfixstupid https://t.co/QwCHa0hvmJ

I don’t know about the “stupid” part, but we see ridiculous warnings all the time, and we just tune them out. And many tourists seem to think Nova Scotia tourism destinations are theme parks, not realizing they’re not simply sites set up for them to visit. What do you do? Create a warning sign that says, “No, seriously — this is a real danger”? I don’t have time this morning to dive into this, but I imagine effective warning signs must be a whole field of study and that we could draw on it for the next go-round in the Cove.

Just as long as we don’t think that will eliminate the problem.

I’ve spent much of my last two weeks in school.

Last year, I signed up for the MFA in Creative Nonfiction at King’s. (Regular Examiner contributor Stephen Kimber is one of the instructors.)

I fell into the program somewhat by chance. Having spent a couple of decades as a freelance writer, I had built my career on writing short pieces and features, along with non-journalism that sometimes ran a bit longer: websites, reports, educational materials. I’d always had book ideas kicking around, but never acted on them.

Then I met with editor Kim Pittaway to discuss a magazine story I was writing for her. She was also the new head of the King’s MFA, and she asked if I’d thought of doing a book. I had. She encouraged me to look into the program. I did, and I signed up. Now I’m about a third of the way to having the book done. I’m also well into writing another book — something not connected to the program, but that would have been much harder if I hadn’t learned a lot from the MFA.

I’m not writing an ad for this particular program. But I do want to promote the value of learning new skills — whether or not that’s in a formal, school setting — and to encourage you to follow through if you have some project you’ve been meaning to take up and keep putting off. (I look forward to eventually reading Tim’s SF novel.)

Even though it is exhausting, there is something great about being with a group of people all learning together, and sharing ideas. I knew a lot about writing, but nearly nothing about the book business — or about how to pace something over 70,000 words instead of 1,500.

I did my undergrad and MA degrees at Concordia University, in Montreal. Concordia was formed through the merger of two colleges, one of which had a long history of educating part-time and mature students. As an undergrad, I was used to having people in their 70s in my philosophy classes, or being in a writing seminar with others fresh out of CEGEP along with people in mid-career or later. It just seemed natural.

One of the guys in my current program is in his 70s. He said something about how it might seem strange to be going back to school at his age and learning new stuff, “but we all know what the alternative is.”

While listening to Halifax talk radio one day, I heard a caller  defending some idiotic opinion based on an appeal to his senior status. “I’m 55 years old,” he said.

I want to be the first guy, not the second one.

Humans are designed to learn. And the world is full of opportunities for us to learn more. Take a bicycle repair workshop, learn to play an instrument, use an app or find a tutor to start learning a language, practice writing, take a wilderness First Aid course, sign up for workshops or free university classes at the library, go back to school.

Learn things and have fun.

No government meetings this week.

Thesis Defence, Biochemistry and Molecular Biology (Wednesday, 9:30am, Room C264, Collaborative Health Education Building) — Pooja Srinivasan will defend her thesis “A study on the importance of an intact-ring structure in proline racemase catalysis.”​

There are no large ships in northern New Hampshire.

Many, many Conservatives are arriving downtown.