You are here: Home / Commentary / Kiss Me, I’m Rioting

Yay, it’s Saint Patrick’s Day! Where we drink green beer, wear funny hats, and historically engage in nativist and white supremacist acts of terrorism against Catholics and Africans! Let’s march on the Black area of town right now and burn down businesses and homes in support of jobs for whites only! 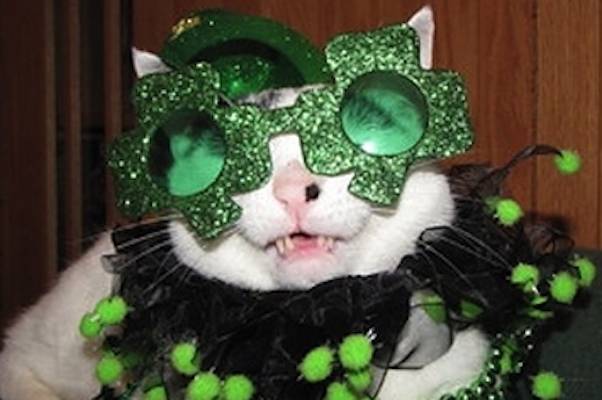 Let us return to March 17, 1845 in New Brunswick. Nativist, racist, anti-Catholic sentiment was on the rise due to an influx of Irish Catholics fleeing the famine.

While early Irish immigration to the province (and to North America more generally) had been from the more wealthy, Protestant, land-owning class of people who could afford the passage and who shared a Scots and English background with the settlers, the famine created large numbers of poorer, socially marginalized Catholic immigrants. 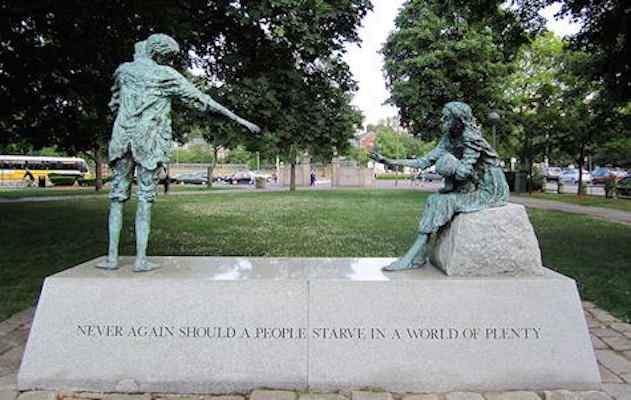 New Brunswick’s Orange rhetoric was also laced with racism, mirroring the contemporary British philosophy of Anglo-Saxon superiority. Ethnicity was mingled with class as Orangemen railed against the “ignorant Mickie” hordes who formed a substandard “class of people.” The destitution of famine immigrants as they disembarked in Saint John, and the squalour of their ghettos in York Point and Portland, appeared to corroborate Orange assertions of Celtic inferiority. Here was positive proof that the Protestant Anglo-Saxon must remain firmly in legislative and judicial control in order to assure the colony’s peaceful survival. The more zealous Orange propagandists, believing that assimilation was a bankrupt concept, called for the deportation of all Celtic Catholics. One might as well, they argued, “attempt to change the colour of the Leopard’s spots, or to ‘wash the Ethiope white,’ as to attempt to tame and civilize the wild, turbulent, irritable, savage, treacherous and hardened natives of the Cities and Mountains of Connaught and Munster.”

And all of those people were reincarnated into 2018 with Twitter accounts and a fixation on Black people. 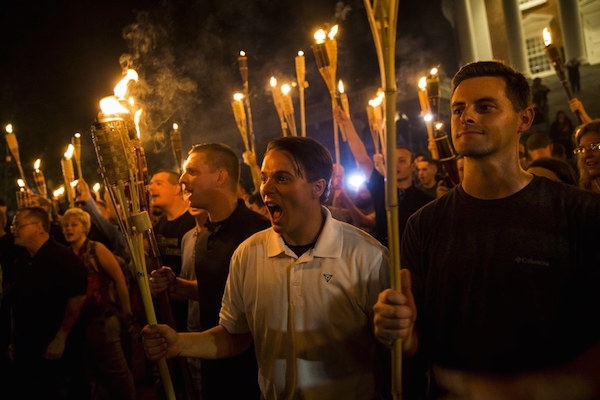 Oddly, despite being the bringers of civilization to the world and the creators of all law and order, etc. these white people strangely enough also engaged upon repeated acts of violence and terrorism! How unexpected.

After a number of attacks and “riots” in which the Protestant instigators suffered no consequences — since the police were also Protestant, and Catholics were not allowed to serve on juries — on St. Patrick’s Day of 1845, the Orangemen struck again:

On 17 March 1845, Portland Orangemen fired without provocation upon a group of Catholic revellers. The incident touched off a wave of reprisals. By nightfall general rioting between Orangemen and Irish Catholics had spread throughout the wharf district and York Point. The fighting was most intense at the foot of Fort Howe Hill in Portland. The rioters dispersed when British troops positioned an artillery piece near Portland’s wharves. The ploy was at best symbolic, for the concentrated fighting abated in the evening when the well-armed Orangemen gained a measure of control over the streets.

The riot killed at least one Catholic, although several bodies were probably secreted away for private burials. The tally of wounded was correspondingly high, with dozens of combatants being hurt seriously enough to warrant medical attention.

The examinations and trials in the riot’s aftermath followed the patterns established in 1842. Although authorities arrested several Orangemen, including two suspected of murder, Saint John’s all-Protestant Grand Jury preemptively threw out their bills before the cases could be brought to trial. Instead the jury returned bills for several Irish Catholic rioters, two of whom were ultimately found guilty and sentenced. The swift vindication of Orangemen by the Grand Jury, despite an abundance of damaging testimony, illustrated the reluctance of Protestant authorities to condemn Orange violence and their continuing propensity to convict only Irish Catholics.

And all of those people were reincarnated into 2018 and presided over the Gerald Stanley verdict. 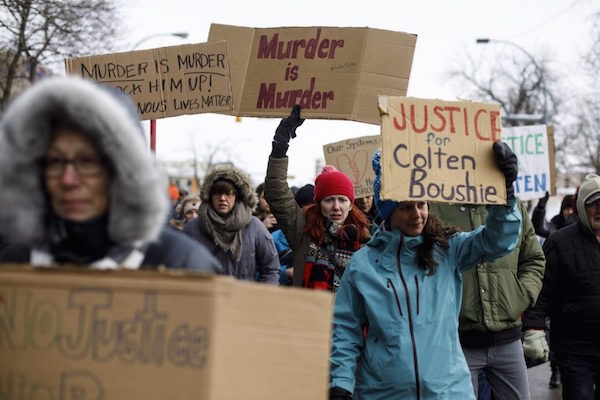 Really, the depressing thing about reading history is that nothing actually changes. Take out an Orange Order here, add in a Proud Boys there, and it’s really one and the same.

But El, I hear you say, where do the Black people come into this? Wasn’t this white on white violence?

Well, if you avoid downtown on Saint Patrick’s Day due to the high possibility of having “WOOOOOO” screamed into your face by a drunken frat boy, then you will have lots of extra time to read Noel Ignatiev’s How the Irish Became White and David Roediger’s The Wages of Whiteness.

Both Ignatiev and Roediger trace how the Irish in America transformed themselves into white people at the expense of African Americans. The Irish historically recognized that as people colonized by English, their condition mirrored that of enslaved Africans and their sympathies lay with the slaves.

As the accounts of the violence suffered by Irish Catholics in New Brunswick indicate, “whiteness” was not a settled category in the mid-nineteenth century, and its expansion to include Irish Catholics (or Eastern Europeans) is the result of political choices made by those groups as well as strategic decisions by those in power to achieve the allegiance of poor whites in return for their consent to and participation in oppression of Blacks. 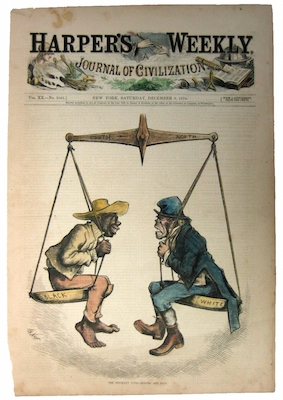 Daniel O’Connell, “The Liberator,” (the “darling” of the Charitable Irish Society of Halifax) who also led the campaign for Irish freedom and the end to union with the British, threatened American Irish who supported slavery. “Dare countenance the system of slavery,” he warned, “and we will recognize you as Irishmen no more.”

In 1841, O’Connell inspired and signed “An Address of the People of Ireland to their Countrymen and Countrywomen in America,” which condemned American slavery. Some 60,000 Irish citizens signed the address.

But in what Ignatiev calls the “saddest words ever written about the Irish diaspora,” the abolitionist William Lloyd Garrison wrote that,”Even to this hour, not a single [North American] Irishman has come forward, either publicly or privately, to express his approval of the address, or to avow his determination to abide by its sentiments.”

Irish immigrants initially lived with, intermarried with, and engaged in acts of solidarity with Africans in America. The Irish upon their first arrival in America were viewed in much the same terms as Africans — as savage and bestial. Early records show indentured Irish labourers engaging in uprisings with enslaved Africans, and organizing against their shared oppressor.

Unlike Africans, however, the Irish were able to “earn” white status, which was accomplished in part by engaging in acts of white supremacist brutality towards Africans. Like poor white Southern labourers, the Irish were induced into allegiance with the wealth-owning exploiter class by the promise of shared whiteness which granted a small measure of humanity and rights that could be denied to Blacks.

As Ignatiev relates in an article for The Root:

What explains the attitude of people whose experience in Ireland and the United States one might have thought would predispose them to sympathy with all victims of slavery and racial oppression? It was not the inevitable consequence of blind historic forces, still less of biology, but of choices made among available alternatives.

In 1834 a mostly Irish mob in Philadelphia rampaged through the black district. By the time they subsided, two black people were killed and many beaten. Two churches and upwards of 20 homes were laid waste, their contents looted or destroyed. A committee appointed to investigate the riot identified as a principal cause the belief that some employers were hiring black workers over whites.

Such events were common at the time. No less a witness than Abraham Lincoln warned in 1837 that “accounts of outrages committed by mobs form the everyday news of the times.” 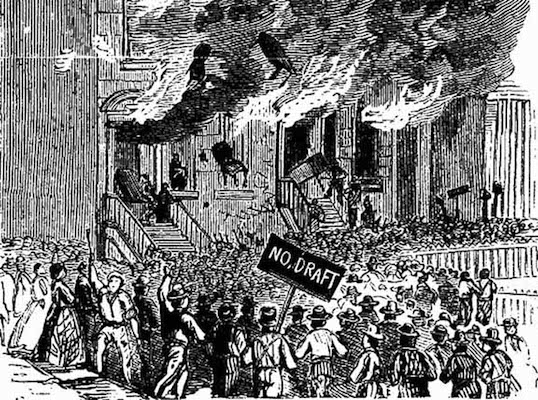 The 1863 “Draft Riots” in New York. The underlying cause was employment of Black dock workers who were attacked by Irish mobs.

Ignatiev goes on to recount numerous other incidents of Irish workers burning, beating and terrorizing not only Black workers, but women and children as well. Saint Patrick’s Day parades could become an occasion for mob terrorism against Black neighbourhoods, as the Irish asserted their whiteness through violence.

Irish attitudes toward the free Negro in the North led them to oppose abolition. In 1838 an Irish mob burned just-completed Pennsylvania Hall, built by subscription to serve as a center for abolitionist meetings. It was not that the Irish supported slavery: They would have been happy to see slavery abolished, provided all the black folk could have been kept on the plantations or shipped out of the country altogether. Since such an outcome could not be guaranteed, throughout the 19th century they were solid supporters of the Democratic Party, which before the Civil War protected slavery in the South and after the War sought to restrict the rights of the freed people.

Some have pointed to competition for jobs as the cause of Irish animosity toward blacks. But in the wage system, all workers compete for jobs. It is not free competition that leads to enduring animosity but its absence. The competition among Irish and black laborers failed to lead to unity because it did not take place under normal labor market conditions but was distorted by the color line. However much the Irish were oppressed as a race in Ireland and exploited as workers in America, once landed in Boston, New York or Philadelphia, they enjoyed one marked advantage over refugees from Southern slavery: No one was chasing them with dogs.

A few years back, I was the guest on a radio call-in show; one of the callers, identifying himself as Irish American, asked, “If we made it, why couldn’t they?” What most appalled me about his question — more than the willful ignorance it showed of how the white-skin privilege system had operated — was his belief that he had “made it.”

If his experience was like that of most “white” working-class Americans, “making it” meant a job he hated and was afraid to lose; a house that was falling down around him; and two weeks’ vacation a year spent either fixing it up or breathing noxious fumes on a highway clogged with motor vehicles on their way to stand in line at an amusement park, in the company of a spouse with whom he has nothing in common and children who hate him. Imagine how different the outcome might have been had his Irish ancestors chosen to act differently a century ago.

So this Saint Patrick’s Day, you could take common cause with Africans and rise against the shared oppressor! Or you could wear a leprechaun hat and get fucked up in some fake Irish pub and puke in the bathtub when you get home and return the next day to the precarious labour, outsized rent, mountain of student debt, and low grade constant misery that was won for you on the premise that at least that was better than being Black.

Or as Jessie Daniels more eloquently puts it, “As people rush to embrace even fictive Irish heritage and encourage strangers to “Kiss Me I’m Irish” today, take just a moment to reflect on the history of racism and the pursuit of whiteness wrapped up in this holiday.”