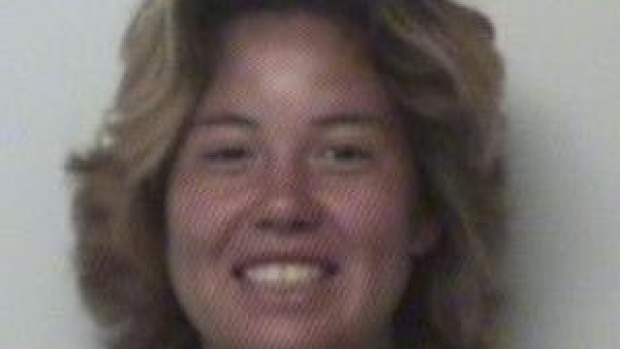 Chrisma Denny, in a photo issued by the Cape Breton Regional Police.

Chrisma Denny, a woman from the Eskasoni reserve, hasn’t been seen since September 11. Her aunt, Elaine Denny, says Chrisma “and many other aboriginal women, face challenges like housing shortages, addiction and homelessness,” reports the CBC. Chrisma’s family has issued a release saying that “society failed Chrisma Joy Denny one turn after another.”

Monday evening, a 68-year-old man stopped at a red light at the corner of Sackville and South Park Streets and then made the right-on-red turn, forgetting the “first look for pedestrians” part. He hit a 26-year-old woman walking in the crosswalk. She was taken to hospital with “minor injuries”—but how “minor” can they be if there’s more than one injury and she had to go to hospital? He was ticketed for failing to yield to a pedestrian in a crosswalk. 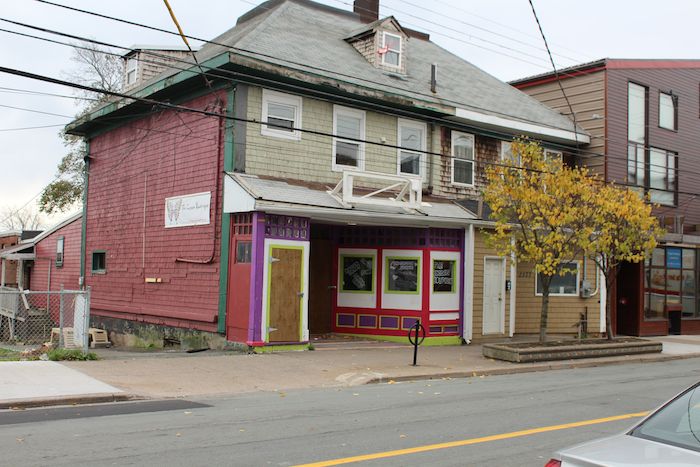 The city has condemned this rooming house at 2179 Gottingen Street. Photo: Halifax Examiner

Monday, the Examiner published an article by reporter Rachel Ward detailing the problematic history of a rooming house on Gottingen Street owned by landlord Hasan Yildiz. The house was closed down by the city on October 30. This article is behind the Examiner’s pay wall and so available only to paid subscribers. To purchase a subscription, click here.

George McCarthy, a Dartmouth business man, has put a deposit on the former Minacs call centre building in Port Hawkesbury with hopes of turning it into a licensed medical marijuana facility, reports the Chronicle Herald. As I’ve pointed out before, the point of our laws around marijuana is to allow corporations to make millions off sick people by selling them industrial pot, and to throw those very same sick people in prison if they grow the stuff themselves.

Buddy and his gal stole a truck Halloween and went joy riding. Which would all be great fun, except for the “hit a minivan” part of the equation. From the police report:

On October 31, at 4:16 a.m., officers responded to Harvey’s located at 3434 Kempt Road in Halifax for a report of the theft of a transport truck. Two employees making a delivery at the restaurant observed a man enter the cab of their awaiting truck and drive away with the truck and attached trailer. As he was leaving the parking lot, the suspect hit a minivan travelling on Kempt Road but thankfully the driver of the minivan was not injured. At 6 a.m., police received a second complaint about the same delivery truck left unattended at the intersection of Jubilee Road and Chestnut Street. A witness observed the suspect leaving the area on foot, walking East on Jubilee Road, with a woman. Upon police arrival, neither the man nor the woman could be located.

Here’s a video of the guy:

6. The terrorists have won

The province is looking for someone to “provide a comprehensive vulnerability threat risk assessment” of Province House, Government House and One Government Place.

Gord MacInnis, whose grandfather is buried at Camp Hill, complains that the cemetery is in disrepair. CTV reports:

Their gravesites are still in good shape, but many others have fallen into disrepair. Several headstones have toppled over, are sinking or are broken and, in most cases, it’s up to the families to fix them.

Is this really a problem? For myself, seeing the weathered and collapsed headstones is part of the charm of walking through an old cemetery. It brings home the impermanence of our lives, and that even our attempts at immortalizing our loved ones with hard stone are destined to fail in the grand sweep of time.

CTV seems to be on the graveyard beat. Earlier this year the station told us that “erosion is destroying a 200-year-old clifftop cemetery in Nova Scotia, exposing human remains and washing some of them out into the ocean.” That is the church graveyard in Ingonish, and locals want somebody, the government I guess, to spend millions of dollars to keep the bones in place. “You have people that are … going to sea,” the caretaker of the cemetery said. “There is nothing we can do about it.”

The remains of forgotten people washing out to sea is beautifully poetic. And in time, all of us, even the most celebrated among us, will be forgotten. 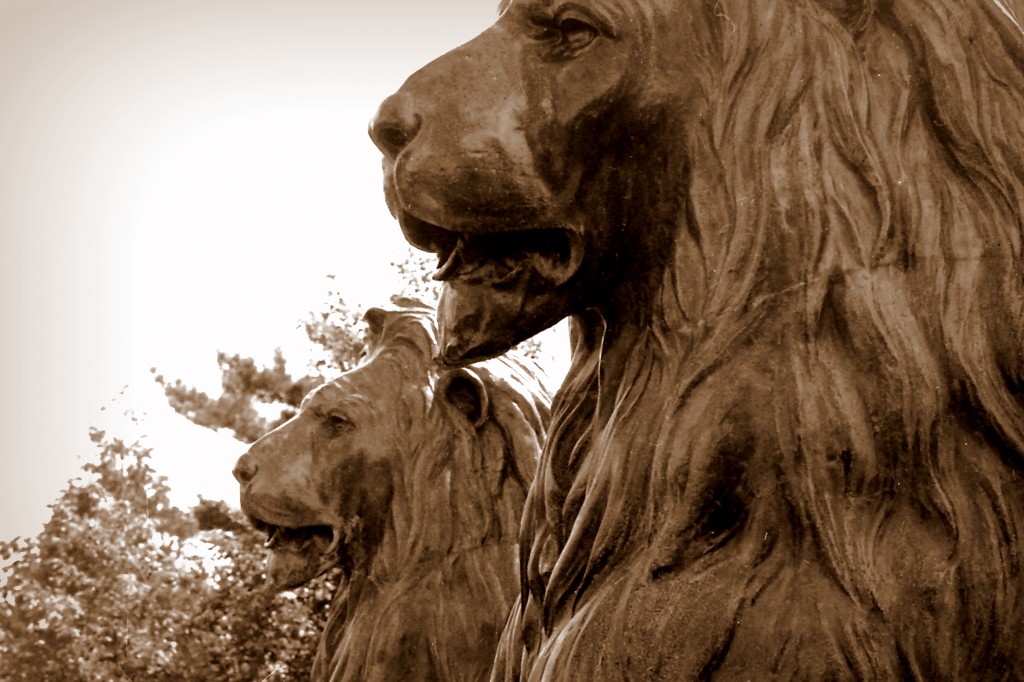 Stephen Archibald recently showed up the depictions of women and men about town. Today, he brings us lions.

2. A River Runs Under it: Daylighting Sawmill River 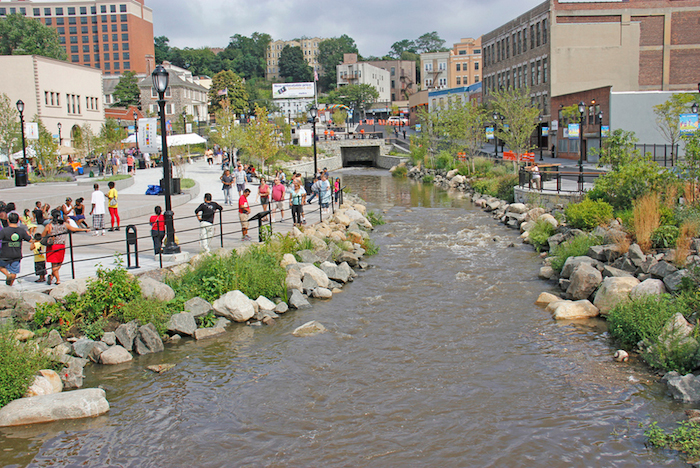 Sam Austin discusses in great detail what it would take to daylight Saw Mill River in Dartmouth. Interestingly, there is another Saw Mill River that has recently been daylighted, this one in Yonkers. 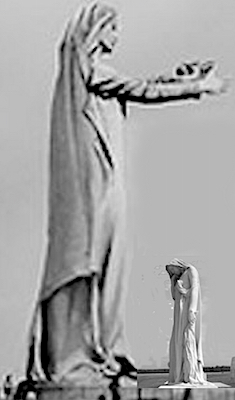 Parker Donham lays out the case against plans for a colossal statue at Green Cove in the Cape Breton Highlands National Park.

Donham lists five sets of reasons to oppose the thing, under the categories Accountability and Transparency, Acquisition of Public Art, Inappropriate Scale, National Park Integrity, and Emotional Blackmail, and it’s hard to argue with any of them.

He is at his most convincing when he basically calls the thing ugly:

[T]he enormous statue proposed for Green Cove was designed without artistic input of any kind, let alone competitive proposals. The businessman-promoter behind the scheme simply scaled up a similar (but better) statue at the Canadian National Vimy Memorial in France to three times its original size, lifted its head, and extended its arms outward. Public Art should not be designed in secret by the millionaire operator of a food packing business and presented as a fait accompli.

If you want to see one whacked out website, check out the Never Forgotten National Memorial  site.

The Politics of Food (7pm, Ondaatje and Scotiabank, McCain Building)—Vandana Shiva “is an Indian environmental acitivist and anti-globalization author who received a PhD in philosophy from the University of Western Ontario. She plays a major role in the global ecofeminist movement and is one of the leaders of the International Forum on Globalization.”

William S. Burroughs: A Man Within (8pm, Dalhousie Art Gallery)—a screening of the 2010 film by Yony Leyser, with a soundtrack by Patti Smith and Sonic Youth. Free.

Dimensionality reduction in the presence of severe and changing class imbalance in cancer data (Thursday, 11:30am, Room 430, Goldberg Computer Science Building)—the speaker is William Klement from the University of Ottawa. Here’s the abstract:

Cancer research involves the identification of prognostic and/or predictive biomarkers to construct molecular signatures that profile the disease. Microarray technology provides expression readouts of tens of thousands of genes. However, the number of patient samples is usually several orders of magnitude less than that. This leads to a substantial struggle with the computational dimensionality when analyzing cancer data. Mining such data to identify genes relevant to patient survival becomes even more challenging in the presence of severe class imbalance, where patient prognosis introduces severe and changing class imbalance over time. The collective effect of such characteristics in the data proves detrimental for machine learning algorithms due to many reasons, chief among which is the lack of representativeness of the underlying distribution, few hundreds of data points over tens of thousands of features.

The talk presents a computationally tractable method to systematically reduce the feature space whilst addressing the issue of data balancing. This unique approach has many advantages in that it avoids the addition of bias during feature selection (as opposed to filtering) while maintaining a tractable computational time to examine all features in the space. The results will show that the proposed method identifies a small set of features consistent with patient prognosis in a manner that resists the influence of class imbalance. In the experiments, we apply the proposed method to identify genes that characterize and predict the survival of patients suffering from adenocarcinoma in the lung. We will also show that the identified genes are specific to adenocarcinoma patients when compared to other types of lung cancer.

If you’ve got an hour to kill, you could spend it worse ways than watching historian Jay Winter talk about “Shell Shock and the Emotional History of the First World War”:

If you’ve got four hours to kill or if, like I’ve done over the past week, you can piece together four hours while on the bus and walking around town, you could listen to part 4 of Dan Carlin’s “Blueprint for Armageddon” podcast series about World War 1. (The entire series is up to about 15 hours, I think.) 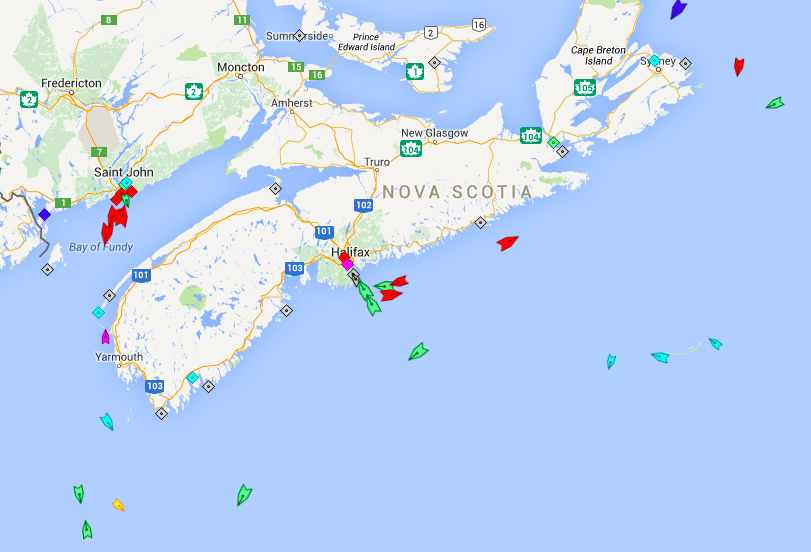 The seas around Nova Scotia, 5am Wednesday. Map: marinetraffic.com