You are here: Home / Featured / Killing Patient Zero: how a 1970s-era Halifax man was blamed for the AIDS crisis

The event pre-dated cell phones, Facebook, Twitter and Instagram. Who knows how the word got out?  But all of a sudden, the cavernous San Francisco Chronicle newsroom was flooded with television, radio, and print reporters. The date was February 17, 1994. The breaking story? Randy Shilts, the nation’s first “AIDS celebrity” journalist had died, at age 42.

Watching the media frenzy from my desk, I remembered what Randy had told me (circa 1986) when he was the Chronicle’s Sunday night city editor and I, then newly hired, was the sole staffer on the 6pm to 2am shift. “No one in power at the paper believed that AIDS was a problem,” Randy said. “I knew they were 100% wrong. So, I decided to give up daily reporting and work as night editor, once a week. That way, I could devote myself entirely to writing a book about AIDS.”

The next year saw Randy’s book And The Band Played On: Politics, People and the AIDS Epidemic shoot to the New York Times bestseller list. It was later translated into several foreign languages and adapted into an award-winning television movie. Eager to capitalize on Randy’s phenomenal success, his publisher offered him serious cash to pen his next book on an American magazine mogul who was rumoured to be gay.

A quarter century after his death (from AIDS), I’ve never forgotten Randy’s disdain for the proposed book project. “I wasn’t going to waste my time on a wealthy, white closet case,” he told me. “Had I been alive during the Civil War,  I would have considered it my journalistic duty to write about slavery.  I wrote about AIDS because it was the most pressing social issue of the day. And by chance, it also affected me personally.”

The new documentary Killing Patient Zero explores the controversy surrounding Gaétan Dugas, the Air Canada flight attendant and one-time resident of Halifax who, in Randy’s narrative, emerged as the “poster boy” for AIDS in North America. The film (by Toronto director Laurie Lynd) will screen at 8:50 p.m on Sunday at the Park Lane cinema as part of the Atlantic Film Festival (FIN).

A  2016 research article in Nature concluded that Dugas — reputedly a well-known figure in late 1970s era queer Halifax — had not sparked the AIDS crisis. The paper noted that the virus had been lurking long before the Quebec native, pilloried as “Patient Zero,” began frequenting gay bathhouses where, as documented in Randy’s book, he’d infected scores of men.

As for the term Patient Zero, Randy maintained that Dugas was first given the name by US medical experts who’d linked him to a cluster of California men who’d contracted AIDS. Dugas was identified as Patient O because he was from outside of California. The letter “O” was later mistaken for the number “0” and so Dugas became known as Patient Zero. 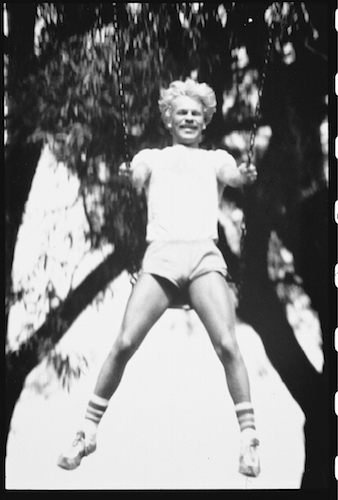 Calling it “catchy,” Randy later conceded that he’d publicized the term in his book. In the early 1980s, Halifax business owner Rand Gaynor had taken a photo of Dugas that was later flashed around the world and that also fuelled his image as Patient Zero. Before Dugas died from AIDS in 1984, at age 31, he’d cooperated fully with health officials in efforts to map the evolution of the disease.

Another FIN documentary, Where’s My Roy Cohn? details the ignoble life of the closeted gay New York attorney who, in the 1950s, joined forces with US Senator Joseph McCarthy (himself  rumoured to be homosexual) in persecuting gays, communists and other so-called “subversives” then under attack by conservative government factions.

A loathsome character (named Roy Cohn) appears in Angels in America, the hit Broadway play by Tony Kushner. Claiming a diagnosis of “liver cancer,” the real Roy Cohn succumbed to AIDS, in 1986, at age 59.  He died, as he’d lived, in a cesspool of lies and deception. The film screens at 9:20 pm on Tuesday, September 17 at the Park Lane.

*Disclosure: Killing Patient Zero staffers scheduled and then, citing time constraints, cancelled an interview with me about Randy Shilts.