Today’s Morning File is written by Selena Ross. I used to be a reporter at the Chronicle Herald, and sometimes (often) get Nova Scotia news nostalgia, so here I am helping Tim take time off.

Northwood long-term care facility gets just $4.70 per day from the province to feed each of its 480 residents, CBC reporters Elizabeth Chiu and Jon Tattrie learned.

That’s shockingly low, and one thing that suggests it’s below the bare minimum is that the home scrounges together 70 cents extra per person per day, out of other sources, to top it up. Still, it can’t afford fresh produce in the winter, and every day the cooks work a “miracle,” said Janet Simm, the home’s CEO.

“If we, for example, offer salmon on a day, that would consume more than half of our daily allotment for an individual.”

Health Minister Leo Glavine says the food quality hasn’t deteriorated after the home’s one-per cent funding cut. But Simm upped the ante, telling CBC that her residents get less than half of the food funding as inmates at Burnside jail, which is $10.62 each per day.

That’s an annoying comparison, said blogger Chris Parsons, who used to work for Northwood and attested on Facebook that nursing home food is “appalling.” (Sorry, no link available to his post.) But “a half decent meal is something everyone deserves,” including inmates, he wrote. “All this means is that you can double a shitty budget and it will still be shitty,” his friend added.

The biggest issue with drawing the parallel is that, as Glavine pointed out halfway down the CBC story, food funding at Burnside covers cooks’ salaries and groceries, whereas at Northwood it only covers groceries. The cost of labour is, of course, huge.

A Syrian family that was sponsored by a large group in Marion Bridge, Cape Breton, has decided after only six months there to move on to Halifax, reports Laura Jean Grant of the Cape Breton Post. The family, which has four young children, has friends from Syria who live in Halifax, and there are more Arabic speakers there, they told their sponsors.

For Nova Scotians hoping that young Syrian families would happily settle in rural areas, this story is a sad counterpoint to the tale of Assam Hadhad, the former chocolatier who set up shop almost immediately after arriving in Antigonish. But it’s hard to ignore a last key detail here:

“They wanted to be closer to their friends and felt more comfortable there with people that can speak their own language because there’s many (refugee) families that went to Halifax, mostly because Halifax has a federal-provincial agency that deals with refugees and we don’t have one in Cape Breton.”

They may be talking about Halifax’s ISANS, which is dedicated to helping settle refugees and immigrants. The province provided grants of up to $1,000 to other communities welcoming refugees. But it would be nearly impossible for rural sponsors to match the translation services, job-hunting help and everything else the pros provide.

The rat population is up by as much as 20 per cent in some parts of Nova Scotia, Adam MacInnis writes in the New Glasgow News. It’s been reported before that rat numbers are up, probably because of the warm winter and a longer-term increase in composting, among other reasons. But apparently it’s been especially dramatic this summer, making people realize that they weren’t fully informed about all the specific ways rats are horrifying:

“When a call comes in, McCarthy said he’s usually told the rat is the size of a cat. But a lot of that has to do with rats puffing up their fur to look bigger…he said.” 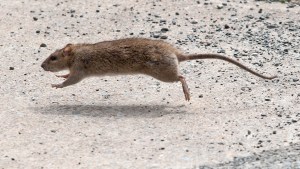 A rat scurries near the old library on Spring Garden Road in Halifax. Jeff Harper, Metro.

Rebecca Thomas, Halifax’s poet laureate, was on CBC’s Information Morning yesterday to talk about seeing people at the A Tribe Called Red show on Friday who had fake war paint smeared on their faces. When she and her friends confronted them, the paint-wearers said they were just having fun.

At this relevant time of year, between summer festival season and Halloween, Thomas asked an interesting question: why don’t people judge indigenous “dress-up” as harshly as they do blackface?

“…redface still has this strange kind of OK-ness about it.”

Anyone have an answer? 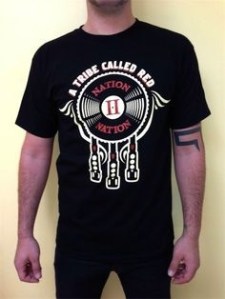 If you want to wear cool “native” stuff, here’s a nice shirt

2. Steeling yourself to bike

In the wake of the most recent serious bike accident in Halifax, Erica Butler wrote a great piece yesterday breaking down the risks of urban cycling by weighing the data that’s out there. The result? In Halifax, cycling is likely a little riskier than walking and more than twice as risky as driving a car. That sounds awful, but it’s not where the decision ends, she writes.

3. Having kids: a lot of effort

Related to the last piece, my former editor at the Herald, Chris Lambie, wrote about kids, obesity and phones. Because he is his own boss now, he broke from traditional format. It did drive home the point.

Cranky letter of the day

“We do not ‘own’ this man. We are not ‘entitled’ to this man. He is a human being, not an object. We should not mislabel his willingness to be accessible and desire to be among the people as a ‘right’ to grab at him, touch him, or yank him into our selfies.”

The Prime Minister was lucky to get out alive. It’s worth reading the entire opinion piece in the Port Hawkesbury Reporter that included this quote. Author Adam Cooke goes on to become one of the first Canadian journalists to applaud Trudeau’s routine public semi-nudity.

Word on the street is that Sidney Crosby and Nathan MacKinnon showed up at a Tim Hortons yesterday, ordered 215 coffees and posted a selfie of their experience on Instagram.

Important note: they were “in uniform,” as Philip Croucher worded it in Metro. He doesn’t bother to spell out that it was a Tims uniform. I mean, how else would two hockey superstars suit up when they’re getting ready to hit the town for a crazy night (Tuesday afternoon) out?

We need to talk about this growing trend. The first time Crosby served customers at Tims, it turned out to be for a cute commercial, so fair enough. But now it seems the people managing Sid and Nate are purposely leave some mystery around why they keep doing this. “A few minutes” in the store doesn’t seem long enough to make another commercial, leaving the possibility that Tims cosplay is just their thing. (Realistic) conspiracy theory: it’s a co-pro between Tims and Instagram, but Insta refuses to admit that paid celebrity selfies are part of its business model.

In the end it doesn’t matter, because you can’t pay someone enough to look as uncomfortable and dorky as these two men look in this haunting photo. 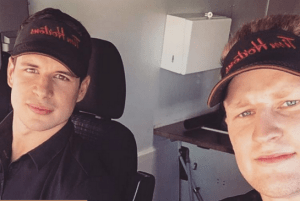 Community Design Advisory Committee (11:30am, City Hall) — Jacob Ritchie, the city’s Urban Design Program Manager, responds to critiques of population growth expectations for the urban area (such as that offered in Monday’s Morning File by Steve Parcell). The short of it: we’ll get that population growth if we wish really, really hard.

Heritage Advisory Committee (3pm, City Hall) — Back in April, the Young Avenue District Heritage Conservation Society applied for heritage designation for 851 Young Avenue, the William Black house. The house wasn’t owned by the Society, but rather by developer George Tsimiklis, who was planning to tear down the house and build something dog-awful. Indeed, the house was razed earlier this summer.

Now that the house has been completely destroyed, staff has processed the heritage application, or at least the information part of the application — staff stopped short of making any recommendation because doing so would be pointless. Judging by past applications for other properties, however, it’s clear that the Black house would have been awarded a heritage designation. 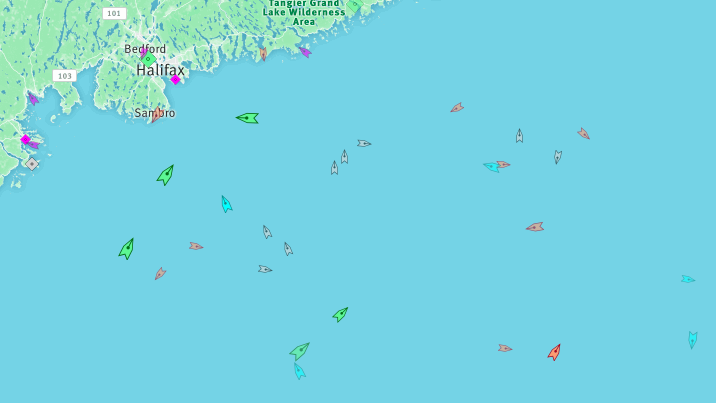 The approach to Halifax, 4:20am Wednesday. Map: marinetraffic.com