Tim is in bed. Katie is writing Morning File. She’s a freelance reporter and she’s out of coffee so she’s sadly settling for tea. (She’s as CFA as they come, in case the tea thing wasn’t a dead giveaway.) 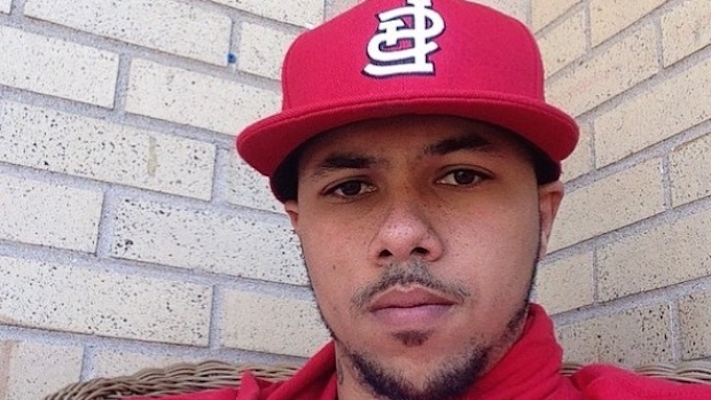 The night that Tylor McInnis died in North Preston, another man was shot by the same group of people, police believe — and he had to play dead to survive. The CBC obtained documents detailing what police believe was Thompson’s gruelling struggle.

According to the documents, Thompson said someone else drove his car and they made at least one stop. He told his family he heard gunshots.

He was then driven to what he later learned was a cemetery. He told family members two shots were fired at him, one grazing his shoulder.

“Liam said he thought he was dead because he felt terrible pain,” one family member told police, according to the documents.

“Liam said he continued to hear voices, so he tried to pretend he was dead.”

Shell Canada has sealed its second deepwater drilling site off the coast of Nova Scotia, but is keeping mum about the results, saying it can take several months to analyze the data. That’s according to a Canadian Press report this morning.

It took over 30 wells to make the Grand Banks discovery in Newfoundland, so we should be prepared for more drilling, according to a Dal professor cited in the article.

Justin Trudeau is leaving us and heading out to New Brunswick today for another town hall meeting to hear about local priorities. He arrived in Halifax yesterday evening for a similar event. How many people were there? Metro says 2,000. Canadian Press says 3,000. CBC says 4,000. So, some people were there I guess.

Justin also swung by CBC Mainstreet beforehand for an interview which you can listen to here. In both the interview and the town hall he was asked — and answered — some tough questions. Let’s look at a few:

Keith Doucette, writing for CP, writes that someone asked Trudeau about the challenges of immigrating to Canada. Trudeau responded that because his maternal grandmother came from Scotland, he has “some idea of the challenges it takes to come to Canada.” Not everyone was pleased with the PM drawing this parallel.

Reporting for CBC, Paul Withers reports that a young conservative named Paul Shaw who asked Trudeau, “I wonder if you could partner with the federal government to replace our hospitals.” That’s a pretty worthwhile question, Shaw, since the Victoria General still hasn’t taken up my suggestion to put cats in little nurse uniforms and have them run through the halls managing any remnants of the hospital’s 2016 rat problem. (What’s the situation with that rat issue, by the way? Any hospital workers want to weigh in?)

Seriously though. Look at how good cats are at taking care of sick people!

Withers writes that Trudeau responded to Shaw’s question and “said it’s not the federal government’s responsibility to decide local priorities.” That’s funny — because former NDP candidate for MLA, Abad Khan, has used that same point to ask why the Prime Minster was even here. More on that in Views.

Sad! I pulled out this giant orange Cheeto that got stuck between your grandmother’s couch cushions in 1967 or so. It has since grown and become sentient, and now is about to hold the highest office of political power in the so-called free world.

One audience member asked Justin Trudeau how he planned to work with said crusty snack remnant. According to Keith Doucette, Trudeau said that jobs depend on a good working relationship with the United States, but that he’d also stand firm on his beliefs in refugee support and women’s equality.  ““We’re going to stay true to who we are,” he said. “Is it going to be a challenge? Sure.”

Discussion of pipelines became a “tense moment” for the Prime Minister, reports Haley Ryan for Metro, after a Mikmaq woman called for oil to be left in the ground:

She asked why Trudeau always brings up jobs and the economy when discussing new pipelines, without the same attention to alternate energy.

“There’s going to be people on other sides of the issue and I can point out 39 different indigenous communities out west who are very supportive of the Kinder Morgan pipeline,” Trudeau said before a chorus of “lies” came from the woman and others near her.

Trudeau asked for them to be respectful as he answered, outlining an ocean’s protection plan for both the B.C. and Atlantic coasts and “world-class” spill response.

Trudeau said while alternative energy is important, approved pipelines like Kinder Morgan would offer oil during the “transition” to new sources.

More discussion over pipelines happened with the students of Divest Dal, outside the hockey arena where Trudeau spoke. As I followed some of the event coverage online, my favourite moment was when Trudeau practically jumped to take a selfie with these two young women, but dodged out of the frame when they asked him a question of substance:

Thanks for the selfie, Justin! We'll hold you to your promise. 💛Members of Divest Dal ask PM JT about his promise to implement the United Nations Declaration on the Rights of Indigenous Peoples (UNDRIP)

Embarrassing fact, though: I’ve watched the video a few times now (because HAHAHAHA) and can’t figure out the first question, on what they’re asking him to implement. I know it’s environment related because that’s Divest Dal’s thing. But if you have better hearing than me, can you post what they’re saying below in the comments?

1. Why was Justin even here?

That’s one question Abad Khan wants to ask. The NDP strategist and former candidate for MLA wrote a public Facebook post criticizing the fact that Mayor Mike Savage, a former Liberal MP for Dartmouth-Cole Harbour, sent out an invite to the regional town hall. Khan says that it’s not appropriate to mix multiple levels of government, and says that our mayor is stumping for a national leader.

“With our mayor hosting, is it asking the federal government for a fair share of revenue?” he says. “Who is paying for the planning, hosting, and lists building? The questions go on and on.”

You can read the whole take in full:

I wonder how people would have felt if Stephen Harper joined a *municipal* town hall Peter Kelly was hosting as mayor….

(Disclosure: Abad Khan worked on former NDP MP Megan Leslie’s campaign in 2015. I worked on her previous campaign for a few weeks in the prior election, when I was a university student.)

2. Distracted walking: should we ban it?

The CBC’s Shaina Luck reported on a new discussion in Halifax, over whether or not we should ban “distracted walking,” which mostly refers to crossing intersections while texting.

Here’s my view: no. This is silly. Three reasons:

In the interest of disclosure, I got hit by a pickup truck once while crossing the street and listening to audio on my phone. Police said it was my fault. I’m still bitter. The truck, however, is presumably fine.

If you have a dog and aren’t sure where you can take your furry friend, there’s a new list of dog-friendly spots in town on Reddit.

Motivated by questions about mapping spaces for orbifolds, we revisit the bicategories of fractions conditions and construction. (I will give both in detail.) In particular, in this talk we will present a weaker set of conditions on the class of arrows to be inverted, and we will present a canonical form for the 2-cell diagrams using the pseudo pullbacks. This presentation makes horizontal composition much simpler than in the general case. 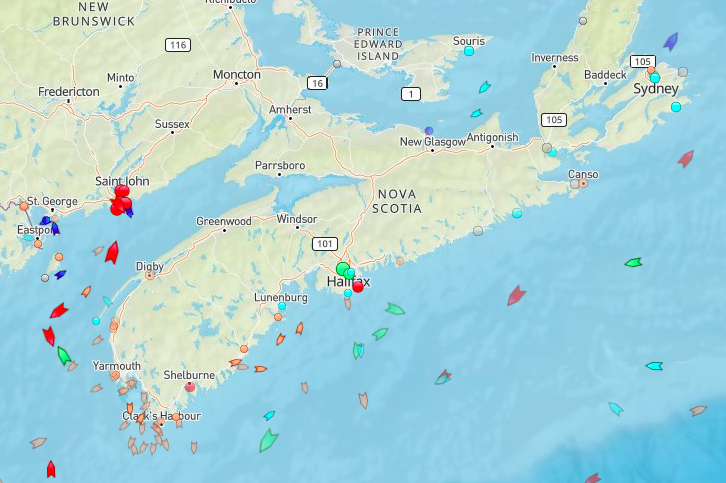 The seas around Nova Scotia, 8:45am Tuesday. There’s been a noticeable uptick in oil tankers (red ships) coming in and out of Saint John recently. Map: marinetraffic.com