“Public Services Minister Judy Foote will be at Irving’s Halifax Shipyard today to make an announcement about the multi-billion dollar project to replace the navy’s aging warships,” reports the Canadian Press. “Foote says she will focus on ‘refining’ the Canadian Surface Combatant procurement strategy.”

Halifax Pride has planned a Vigil for Orlando, tonight at 8pm on the Common. Details here. 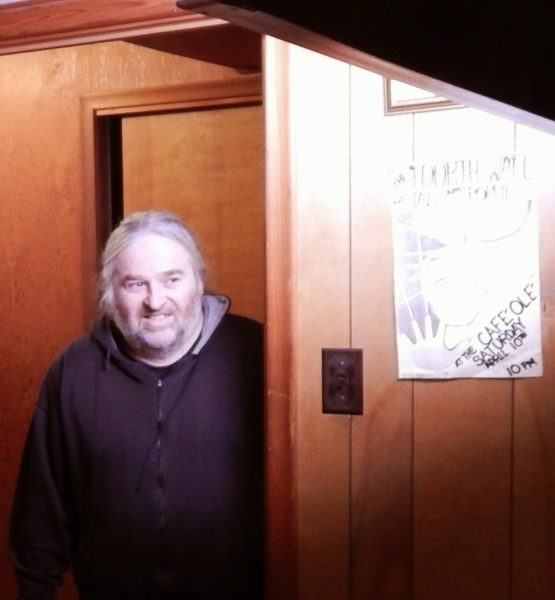 This week we speak with local arts writer Ron Foley Macdonald about the dearth of arts criticism in Nova Scotia and how fewer arts organizations are taking risks with their content for fear of alienating their corporate benefactors. MacDonald writes extensively about arts and culture at View902.

Also, Russell reads an actual daily newspaper written by actual journalists and muses about how such a model could work in Halifax. 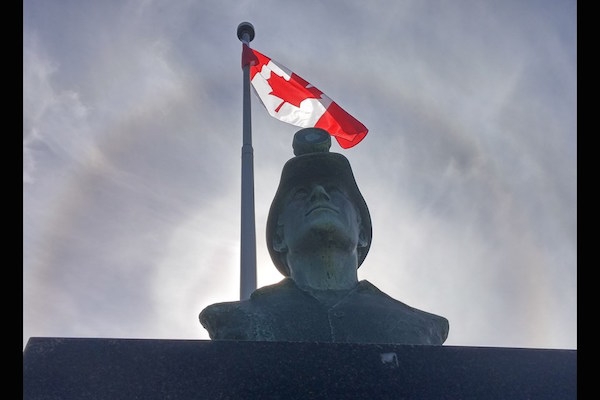 Saturday was Davis Day, and that morning historian Jacob Remes explained the significance:

Today in 1925, soldiers in New Waterford, Nova Scotia, shot and killed William Davis, a striking coal miner. Members of District 26 of the United Mine Workers, representing miners in Nova Scotia, have never worked on June 11 since.

Davis was killed after a militant turn in a long and bitter strike in the coal fields of eastern Nova Scotia. The previous contract had expired in January, and relief committees in each of the towns had been operating since the winter. To pressure the workers, the employer, the British Empire Steel Company, or BESCO, cut off credit at the company stores at the most militant mine heads. The miners walked off the job in March, and BESCO retaliated by pulling out the ponies and maintenance equipment from three collieries and allowing them to flood. The the men who left work at those mines, they knew, would probably never return.

Even so, the UMW international insisted on a strategy of waiting. John L. Lewis, the UMW’s virulently anti-radical international president, had colluded with the company to break the last strike, watching as District President J.B. McLachlan had been carted off to jail on trumped-up sedition charges and replacing him with a docile and unelected executive. Now McLachlan was out of prison and running a radical newspaper, and by early June the miners were frustrated that no progress had been made.

So they stopped waiting and called for a total strike. Before, only actual miners had stopped work. Now, nobody would be allowed to work for the company. On June 4, the men who had been operating a company power plant in New Waterford walked off the job, cutting off the town’s water and electricity. On June 11, fifty managers and mounted company police overtook the few picketers guarding the plant. In response hundreds—estimates ranged from 700 to 3,000—of striking miners marched to the plant to enforce the strike.

They were met with gunfire. Many were beaten by police, several were injured by bullets, and one was killed. The death of William Davis sparked a riot in which company stores — which had remained tauntingly well stocked but closed to strikers — were looted and burned. Angry miners ran the police out of town and would perhaps have killed them had it not been for the intercession of Father J.H. Nicholson, Mt. Carmel Parish Priest in New Waterford, who calmed the men until the police had a chance to escape. William Davis, killed for striking, had not been given that chance.

To keep alive the memory of the Strike of 1925 and the murder of William Davis, the members of District 26 swore they would never work again on June 11. Davis Day became a holiday in the coal mining region of Cape Breton. But gradually, Davis Day has become a day associated less with remember the killing of a striker and more with remembering all the dead of Nova Scotia’s mines. There have been many, from the 75 men killed in the Springhill mine collapse of 1958, to the 26 non-union miners killed in the Westray explosion of 1992. In 2008, after the social democratic New Democratic Party was elected to the Nova Scotia government, the province finally recognized Miners’ Memorial Day. But Davis Day should be more than a commemoration of mining accidents, as terrible as those are. Davis did not die accidentally in a tragic, if avoidable, disaster. He was murdered by the military for striking.

Tom Ayers, who is a striking Chronicle Herald reporter now writing for the union-produced Local Xpress, covered Saturday’s solemn ceremony at Glace Bay. Ayers reports that United Mine Workers of America representative Bob Burchell made clear that the union battles over mining are not a thing of the past:

Burchell, never one to shy away from a fight, said the safety of those who work underground can only be protected with the help of a union, and he took a swipe at the latest owners of the Donkin mine.

Kameron Coal Management of Halifax, a subsidiary of the Cline Group LLC based in Illinois, recently purchased the nearby coal mine from international mining giant Xstrata.

The company has said it intends to begin mining coal later this year, but Burchell said company officials have not been willing to talk with the union.

“I’m biting my tongue, because I certainly didn’t want to make this political today, but I do have to make one comment, and then I’ll leave it alone,” said Burchell.

“When we have our (Davis Day) services, and Xstrata was looking at taking over the Donkin mine, they showed up with a wreath each year, and I was very disappointed to see that Chris Cline’s group did not show up here today with a wreath.

“If they expect to open a mine here in Cape Breton, we will be going after them and trying to unionize it.”

Over the last three years, mining companies connected to Cline’s operations in the U.S. have recorded three deaths and 107 injuries that required workers to take time off or be reassigned to other duties, according to previous reports, and paid out $5.3 million in penalties during that time.

“When you pay $6 million in fines for safety violations and you have three fatalities over the last five years, that’s not safe, and they’re not going to do it here,” Burchell said to general applause.

Ayers is of course on strike himself, and couldn’t help but notice the perverse irony that the Chronicle Herald was covering Saturday’s ceremony:

Scab John MacNeil, who has written for @chronicleherald since @HTU_official members forced to strike, was at Davis Day today. #CHstrike

The ECMA award-winning Mullins has co-written tunes with Lennie Gallant, his cousin Gordie Sampson and Chris Kirby, among other well-known musicians, but he’s also written with novices before.

He connected with Jones, whom he’s never met, through a mutual friend, and says when he read Jones’s lyrics, he recognized a song that was appropriate for the times.

“It was easy for me to get involved, because I believed in the words he was saying. As a songwriter, I have a responsibility to have a positive influence on listeners and society.

“The Edmonton-based Parkland Institute this week released a timely reality check that most of Canada’s politicians and media will likely try to ignore,” writes Richard Starr:

The leftish think tank based at the University of Alberta stated bluntly that reducing greenhouse gas emissions while growing the oil and gas sector is like wanting to “have your cake and eat it too.”

The scenario requiring the biggest cuts would be one in which the BC government gets its hoped-for five LNG export plants and the National Energy Board’s projection of a doubling of oil sands production comes about. That situation would result in emissions from the oil and gas sector going up by over 30% while emissions from the rest of the economy would have to drop 59% to meet the minimum Paris commitment.

The best case oil and gas development scenario – only one LNG export plant in BC and just a 45% increase in oil sands production and emissions as a result of the Notley government’s cap on GHG emissions from the oil sands – is somewhat better, but not by much. In that case, a 47% reduction in emissions from the rest of the economy would be required.

“It would be very difficult to reduce emissions outside the oil and gas sector by between 47 and 59 per cent below 2014 levels by 2030,” Hughes writes. “Short of an economic collapse, it is difficult to see how Canada could realistically meet its Paris commitments without rethinking its plans for oil and gas development.”

You can read the Parkland report here.

North West Community Council (4pm, Acadia Hall) — the council will rescind its earlier approval of zoning changes for Bedford West. I have no idea what that’s about.

Ferries (noon MA 310) — somebody — we can’t say who because the event listing doesn’t say, so let’s just pretend it’s that guy who asks for money outside Shoppers Drug Mart on Spring Garden Road — will be speaking on “The Influence of Weather and Ice on Ferry Operations: Modelling Present-Day Effects to Predict Future Trends.” Buddy on Spring Garden sent in an abstract:

Ferry performance is influenced to a great degree by environmental factors. Adverse weather and ice conditions can severely restrict the ability to conduct operations in a safe, efficient, and financially viable manner. Furthermore, as regional conditions vary due to climate change influences, the effects may become more severe. In order to better understand how specific weather and ice factors influence ferry operations, a statistical analysis is conducted using a case study of historical Marine Atlantic Incorporated traffic data and historical weather and ice condition data from the National Centers for Environmental Prediction North American Regional Reanalysis. Random Forest models are constructed to predict ferry sailing cancellations and delays, using selected environmental factors as inputs, to examine the influence and relationships of specific factors and combinations of factors, and to project rates of cancellation in the coming decades. Results show that (1) environmental factors are good predictors of cancellations and poor predictors of delays, (2) wind speed is the most important environmental factor for cancellation prediction, and air temperature the most important for delay prediction, and, (3) that the ratio of cancelled sailings to total sailings is projected to increase significantly, and possibly more than double, over the next three decades.

That’s probably worth a few coins tossed his way, eh? 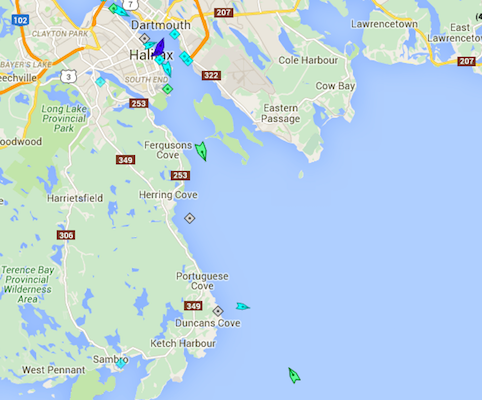 Halifax Harbour, 8:35am Monday. Rio Blackwater is exiting the harbour near McNabs Island, while the pilot boat (blue) is heading out to meet BBC Paula (green, at bottom). Map: marinetraffic.com

Somebody bought the old OpenFile.ca URL and renewed it last week. There’s a placeholder page on the site.