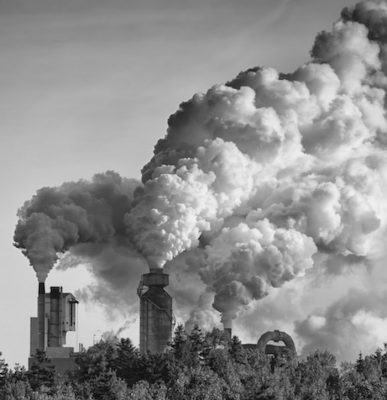 “In a study published in 2017, Dalhousie University researchers reported that air levels of three volatile organic compounds (VOCs) near the Abercrombie pulp mill in Pictou County exceeded cancer risk thresholds and ‘are of primary health concern in terms of population risk,’” reports Linda Pannozzo, who goes on to explore the contents of the Dal study and how it’s been ignored by policy-makers.

This is Part 3 of Pannozzo’s “Dirty Dealing” series, which deals with environmental issues with the Northern Pulp Mill and the province’s response to them. In Part 3, Pannozzo zeroes in on the air pollution generated by the plant.

Besides those serious — alarming, even — concerns, Pannozzo raises two other issues of note.

[I]n Nova Scotia the government sets polluters’ emission limits on a case-by-case basis. So this means there is no across-the-board limit for particulate matter emissions, for example, but limits are set for each facility. This piecemeal approach is preferred by provincial governments because it can weigh the economic benefits of a plant against the environmental impact.

In other words, it could be decided that the harm to human health and the environment are warranted because of the social or economic benefits.

Second, Pannozzo attempted to contact all six coauthors of the air quality study, and each declined to speak with her. She explains:

In an effort to understand their silence, the Halifax Examiner has filed a Freedom of Information Request with the government and will report back when that information is released. However, it is worth noting that a number of university professors from Dalhousie University, Acadia University, Cape Breton University, and Saint Francis Xavier University are part of the Boat Harbour Advisory Committee, which was formed in January 2016, to assist with the Boat Harbour remediation project. Some of the professors might have signed agreements and are engaged in research projects funded by the province, through Nova Scotia Lands, with Ken Swain as the project leader.

While it is not unusual for a professor to enter into an agreement and agree not to speak on an issue in order to secure funding, it does seem incredulous that they would be prohibited from discussing an already published, publicly funded, peer-reviewed study that sheds important light on a public health issue.

I interviewed Pannozzo yesterday for this week’s Examineradio podcast, which should be published later today.

And just a gentle reminder… it’s great that readers recognize that Pannozzo’s work is essential reading. I know that because each time I publish an investigative piece by Pannozzo, I get multiple requests to take the article out from behind the paywall because “it’s so important.” Indeed, it is important work. But your subscriptions are how we pay Pannozzo, and how we pay to host her work. She can’t work for free, and neither can I. (Publishing a lengthy and detailed piece like this takes a lot of my time as well; I did nothing else yesterday but work on this article and interview Pannozzo.) So, please subscribe!

“The Nova Scotia Liberal government’s sweeping legislation to reform education administration passed on Thursday, exactly one week after it was introduced at Province House,” reports Michael Gorman for the CBC:

Bill 72 passed 25-21, with all government MLAs voting in favour and all opposition MLAs voting against the legislation. Among other things, the bill dissolves all elected English language school boards, removes administrators from the Nova Scotia Teachers Union, creates an appointed advisory committee and essentially places all accountability on the Education Department.

Which is odd. A reader points out that the former Liberal government in New Brunswick had dissolved that province’s school boards, but when the Conservatives formed government they reestablished them. Reported the Canadian Press in 2000:

New Brunswick is returning to a system of elected school boards.

Premier Bernard Lord released a discussion paper yesterday looking for ideas and suggestions for a new, more effective structure to govern public education — one that will involve a return to elected representatives.

The Liberal government of former premier Frank McKenna scrapped elected school boards several years ago in favour of a complex system of parent advisory groups and superintendents under the authority of the Minister of Education in Fredericton.

But the Conservatives are in office now and Mr. Lord said New Brunswickers never accepted the parent advisory groups.

“We want to ensure greater participation of parents and communities in the school system,” Mr. Lord said.

Seems a straightforward campaign platform: “Elect us, and we’ll reestablish the school boards.” And yet neither the NDP nor the PCs have adopted that position. NDP Leader Gary Burrill could simply make it party policy. As for the PCs, now that various candidates are jockeying for the leadership position, this would be a great platform to run on. But, silence all the way around. (Unless I’ve missed something.)

Universities should foster free speech, not cower to political correctness. No Free Speech = No Funding. Universities Sign my petition if you agree. https://t.co/6Gj0ppyrzK #nspoli #nspc

There you have it, folks. If any university puts restrictions on student groups backing the Boycott, Divest, Sanctions movement against Israeli apartheid, or if a student is disciplined for daring to post “#whitefragilitycankissmyass” on Facebook, John Lohr will personally intervene and de-fund the entire university.

As I’ve noted before, the so-called “free-speech advocates” only seem to do their advocating when nazis, misogynists, and other assorted reprehensibles come out of the woodwork. The everyday silencing of the anti-apartheid movement, or restrictions on the speech of prisoners, or the climate of fear that makes every assertion of rights by any student of colour an act of bravery… well, that all passes without comment from the “free-speech advocates.”

4. Threats made against schools

“Police were present at three schools in the Halifax area Thursday after they received a report of threats towards the schools,” reports the Canadian Press:

“There was a threat received here in the mail (Wednesday) that was specific to Ian Forsythe school and Caledonia,” says Halifax Regional School Board spokesperson Doug Hadley. “There was also a letter received in the mail at Rocky Lake Junior High, so in both cases that information was turned over to police immediately.”

Hadely didn’t disclose the nature of the threats, but said once Halifax police were notified they did a threat assessment and determined there was no need to cancel classes for the three schools.

“To provide assurance to people, we asked that if there was going to be an ability to have a police presence at the schools (Thursday) they said they would absolutely have police on site,” says Hadley.

At approximately 8:40 pm police responded to the area of Nantucket Avenue near the entrance to the bus terminal in Dartmouth. A 38 year old female had been struck by a vehicle at this location. The female was struck in the pedestrian walkway. Investigation was unable to determine who was at fault in the incident and at this point no charges have been laid. The female was treated at the hospital for non-life threatening injuries.

The artist’s rendering of the Maritime Centre shows that all utility wires will be removed and the St. Mary’s Glebe House across the street will be torn down.

“The Maritime Centre’s face-lift, expected to lessen the impact of wind on a major downtown Halifax street, was approved by the municipality’s Design Review Committee on Thursday,” reports Zane Woodford for Metro:

When the 22-storey tower was built in the 1970s, the effect of wind from tall buildings didn’t factor into development decision-making. Buildings going up now are required to have podiums to catch and divert the wind blowing down from towers like the Maritime Centre.

Municipal planning staff and the project’s lead designer, Ron Burdock, described the current wind conditions as “notorious,” and Burdock said wind on part of the sidewalk on Barrington Street is actually dangerous during certain times of the year.

The addition adds a three-storey podium, and a study found that it would improve wind conditions around the building, making the area more comfortable for pedestrians.

I didn’t have time to dive into the staff report on the expansion or to attend yesterday’s meeting, so… maybe? But I have my doubts about all claims from wind studies. For instance, back in 2016 I commented on the wind study for the Nova Centre:

Oh, it’s worth noting that RWDI [the wind consultant] employed a bit of a hedge:

A 20% exceedance is used in these criteria to determine the comfort category, which suggests that wind speeds would be comfortable for the corresponding activity at least 80% of the time or four out of five days.

The city should now hire another wind consultant to conduct a post-construction study of the Nova Centre area to see if RWDI’s forecasts hold up. My entirely anecdotal experience is that they do not — Argyle Street seems far windier than it was before the Borg was plopped down on the street, but to be fair, that might just be the hot air of the bloviating and bullshitting politicians patting themselves on the back for the wonderful success of the thing.

Similarly, I have my doubts that the three-storey expansion/addition to the Maritime Centre will solve any of the wind problems (again: shouldn’t we check after-the-fact?); it just looks like an excuse to get more office space into the building. (Because there’s such a shortage of office space, I guess.)

The Maritime Centre was built on the site of the old Capitol Theatre:

Moncton's Capitol Theatre is so awesome. Halifax used to have one & it looked like this. Now it's Maritime Mall. 💔 pic.twitter.com/U4LGCeAuRL

So we went from something with a bit of class to… the Maritime Centre.

A reader points out that the expansion fills in the patio space that is used by Niche restaurant. She writes:

The steps and triangle that is the outside patio for the restaurant will be gone supposedly to reduce the wind. Pre-Maritime Centre this was the location of a pathway between Barrington and Hollis (I read it on a plaque right there). I wasn’t around when this was built but I imagine the triangle was to meet a 30% public open space requirement. More vibrant, walkable, pedestrian oriented, world-class city BS. Comes with a rubber stamp. 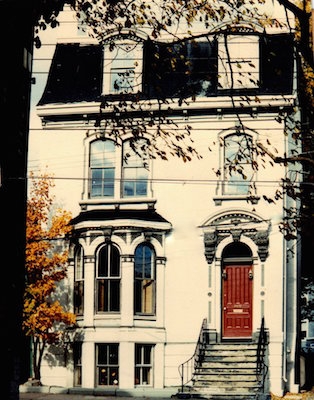 “Do you have a favourite house? ” asks Stephen Archibald:

The one you go out of your way to walk by because it’s an essential element of your rich fantasy life. I’ve heard that a big, old house on Inglis Street in Halifax excites the imagination of many people in this way. Now I can offer them and you a glimpse inside, because we lived there in the 1980s. (A few years ago I did a post showing drawings of the exterior of the house).

A builder constructed the double house in the 1870s. In my mind, the highly ornate stone carving over the entrance is a developer’s attempt to maximize curb appeal. The attached, mirror image of our house was destroyed by fire about 1960, and is the present location of the Resolutes Club.

The pictures of Archibald, his wife, and their friends in all their 1980s get-up are adorable.

Neural Mechanisms of Age-dependent Memory Loss: Depends on Where You Look (Friday, 3:40pm, Room 5260, Life Sciences Centre) — Carol Barnes from the University of Arizona will speak. 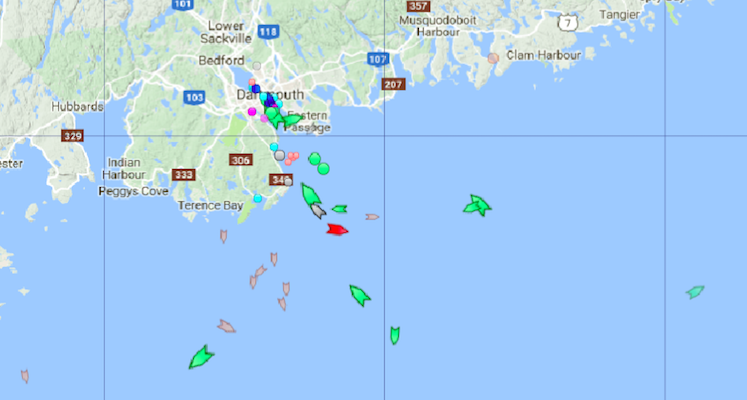 The approach to Halifax Harbour, 9:30am Friday. Map: marinetraffic.com