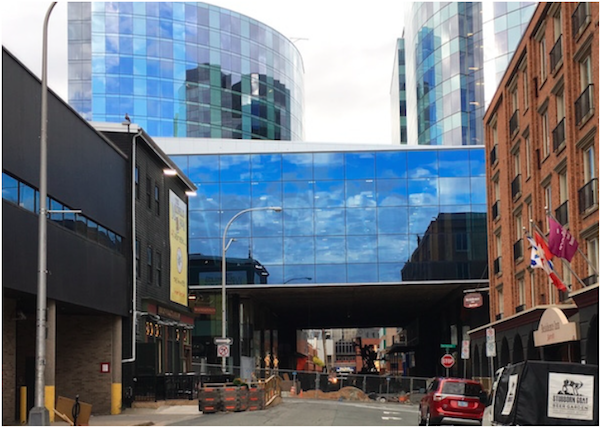 Wednesday, Halifax council is meeting as part of the ongoing budgeting process, this time to consider the Fiscal Services part of the budget. Yawn, mostly. Except the part that deals with the Halifax Convention Centre, which is summarized with this slide from a staff report: 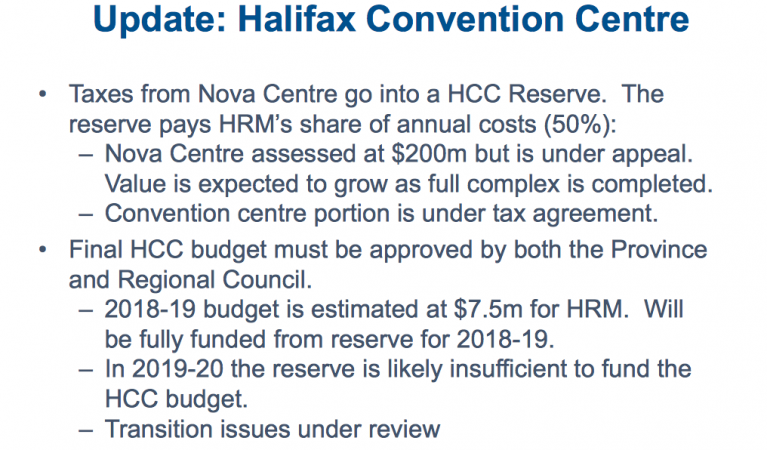 Let me walk you through that.

The argument for building the new convention centre was never primarily that the thing would pay for itself, but rather that all the new and expanded convention business would result in more business for people in the event business; more business for the Halifax (and to some extent, provincial) hotel, entertainment, and tourism trade; and only lastly more tax revenue for both the province and city. It’s that last bit that concerns us here.

Unlike the old convention centre, the new convention centre is not owned and managed solely by the province. Rather, the city and province split ownership and operation 50-50, with the facility itself leased from developer Joe Ramia. The old provincial crown corporation Trade Centre Limited morphed into a new organization called Events East, which is managed by both the city and the province, again with a 50-50 split. This means the province appoints half the directors and the city appoints half the directors. More importantly, it means the province and city also split the lease payments to Ramia, and are each responsible for half the revenue shortfalls of Events East, a potential liability that could conceivably reach up to infinity dollars a year.

To cover this potential liability placed onto the city, a strange and new (to Halifax) tax calculation was made. Property taxes from the Nova Centre complex, and from the surrounding two blocks of Argyle and Grafton Streets, would be separated out from the rest of property tax revenues. As the Nova Centre opened, and as businesspeople from Calgary travelling on expense accounts dumped money into Argyle Street bars, tax assessments from the Nova Centre and area would increase, and therefore tax receipts would also increase. That increase in tax revenue would then be used to cover the lease payments for the convention centre, and to cover potential liabilities from Events East.

Let’s pause right here and point out this is not how property taxes are supposed to work.

First of all, a larger convention centre and supposedly more successful Argyle Street will demand more city services in and of themselves. Just last weekend, a guy got stabbed on Argyle Street; that entails all sorts of police costs. If there are more and more drunk businesspeople from Calgary on expense accounts cluttering up the street, we can expect more stabbings, more police calls, more everything. That’s just a reflection of the scale of the operation. But those additional costs won’t be covered by the increase in property tax receipts from the area because those increased receipts are already dedicated to the convention centre lease payments and potential revenue shortfalls.

More importantly, property taxes aren’t a per-parcel “revenue in–services out” arrangement. Here’s how I explained it in December:

While the city is separating out the Nova Centre and the couple of blocks surrounding it to look at revenue received from property taxes versus costs of the convention centre, that’s not the purpose of property taxes. Rather, we have property taxes to pay for all city services across the municipality — policing, firefighting, parks and recreation, road costs, etc.

In general, residential property taxes don’t “pay for themselves.” That is, the taxes I pay on my house don’t cover the services I receive. Nor should they. And, again generally speaking, commercial property taxes “overpay” for the city services delivered directly to the property, and again, that’s how it should be. We can’t have a functioning city by delineating out costs per property parcel. We have all sorts of collective costs that make it possible for us each to work and live and operate businesses in the city, and so everyone pays into the whole.

Look at it this way: Before the Nova Centre was built, back when the site contained the old Chronicle Herald building and Argyle Street bars were still hip, the area generated a lot more in property taxes than the city spent on services directly for those businesses. But now we’re suddenly saying that all that’s required is the Nova Centre and surrounding blocks generate enough in property taxes just to cover the expense of the convention centre, and nothing else.

It’s doubtful that those property taxes will actually cover the convention centre costs, at least for the first few years, but even if and when they do, it’ll still be a net loss to the city.

There’s only so much bar business one city can maintain. Presumably, if the Argyle bar district becomes hip again (a big if, but for the sake of argument), that will mean fewer people will be going to the actually hip north end bars; they’ll be shifting their drinking dollars to Argyle. As a result, yes, Argyle Street tax assessments (and therefore tax receipts) will go up, but at the expense of the north end bar district: those north end assessments will go down (or not grow as quickly as they otherwise would), and revenues will decline.

This is important not just when considering the Nova Centre but also because the exact same bogus calculation is about to be sprung on us for the proposed CFL stadium. We’ve already heard from the ownership team that stadium financing will be “tax-neutral” — that sounds to me that the plan is that the city will pony up a couple of hundred million dollars to build a stadium, but those costs will be “recouped” through increased property tax receipts from nearby areas. Once again: this is not how property taxes work. You can’t isolate a district and consider only its own tax revenues and service costs. A stadium or convention centre is just one part of an entire city, and tax revenues and service expenses should be calculated for the entire city, not just this or that neighbourhood.

But even the bogus tax reasoning isn’t working

Back to the staff slide above, we see that the “Nova Centre assessed at $200m but is under appeal.” Wait, what? How’d I miss that? I can’t find the appeal this morning on the UARB’s search page; maybe it hasn’t yet been officially filed?

But it doesn’t surprise me that Ramia is appealing his assessment. He’s got an incomplete hotel without an operator, and a mostly empty office tower. It’s probably not worth $200 million. But boy howdy, remember when Ramia was the fêted saviour of Halifax and was going to make us all rich, rich, rich?

Anyway, worry not, says the staff report, because “Value is expected to grow as full complex is completed.” Well, maybe. But what does Ramia’s appeal mean for us right now?

The “2018-19 budget [for the convention centre] is estimated at $7.5m for HRM. Will be fully funded from reserve for 2018-19.” Er, from reserve, eh? That’s arguably (but just arguably) an acceptable use of reserve funds, but it’s not how this thing was sold to us — increased property taxes from the Nova Centre itself were supposed to pay for the convention centre costs. And now they’re not.

“What’s this reserve fund?” you ask. Well, just last week the city was celebrating a tax windfall of $12 million over and above the budgeted amount. That money came primarily through the deed transfer tax and reflects a few very large commercial sales, like the sale of the Highfield Park apartments in Dartmouth. Zane Woodford at Metro interviewed city Finance Director Jerry Blackwood about the windfall:

But just because the municipality is bringing in this extra cash doesn’t mean your taxes aren’t going up in the coming year: any surplus money has to go into the municipality’s reserves, basically HRM’s savings accounts.

“You don’t typically cover off operating expenditures with any surplus dollars, you would want to build that into your rate base because it’s going to be ongoing into the future,” Blackwood said.

And it gets worse next year: “In 2019-20 the reserve is likely insufficient to fund the HCC budget.” That makes sense: most of that $12 million is being used up for convention centre operations this year.

Were I a city councillor, right now I’d be freaking out, burning up the email, raising hell, demanding answers. Undoubtedly, however, staff will tell council not to worry. They’ll say that long-term projections for increased tax revenues will eventually cover the operating costs. But there are two issues here.

First: will they? The projections are already wrong, and are already costing us $7.5 million this year, and who knows what next year. The city’s contract with the province for the convention centre actually builds in a 10-year fudge factor, where should revenues fall short, the province will carry the city’s costs, plus interest. This could become quite costly for the city down the road.

Secondly: what about the money going into this money pit now? Will this year’s $7.5 million spent from reserves on convention centre operations ever be “paid back” into the general budget? You can’t have it both ways: either the Nova Centre and area is its own separate district for tax revenues and convention centre costs, or it’s not. The way it’s actually being calculated now is that costs for the convention centre are being covered by the entire city, but once (if ever) Nova Centre and area tax receipts can cover those costs, all the past is forgiven.

This is an accounting nightmare, but throw in enough smoke and mirrors and the public will be fooled.

And sure enough, says the staff report: “Transition issues [for operation of the convention centre] under review.”

I was interviewed by Canadaland about the proposed federal bailout of legacy media operations. You can listen to the podcast here.

City Council (Tuesday, 1pm, City Hall) — a lot of transportation issues to be discussed, including the proposed Gottingen Street bus lane, the South Park Street bike lanes, and the potential for electric buses. Also, arena ice fees and the sale of the Bowles Arena. I’ll be live-blogging the meeting via the Examiner’s Twitter account, @hfxExaminer.

Public Accounts (Wednesday, 9am, Province House ) — all about wine.

NMR Why Bother? Studies of the p97 Molecular Machine Provide an Answer (Wednesday, 4pm, Theatre A, Tupper Medical Building) — Lewis Kay from the University of Toronto will speak. 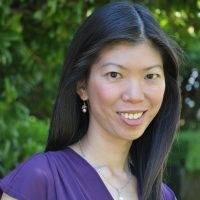 Who Can Read My Body? Health Data, Privacy, and Control (Friday, 7pm, in the theatre named after a bank) — Anita Ho, from the University of British Columbia and the University of California at San Francisco, will speak.