You are here: Home / Featured / It is my mother’s strength that gives me my backbone

In my favourite entry in my baby book, my mother writes:

El is very stubborn. If you say the sky is blue, she will tell you it’s green. But she’s very sensitive, really. She can’t bear to hear stories where anyone gets hurt. When the witch gets put in the oven, she cries.

I smile at this characterization of me. Besides the fact that it accurately sums my personality today, there is real love in my mother’s allowing me to be a child who cries over stories, over witches.

Being sensitive isn’t usually a good thing in Black upbringings. Crying when your mother combs your hair makes you “tender headed,” and Black children are taught to toughen up. As a teenager and young adult, when I would tell my mother I didn’t “feel like” doing something, or that something hurt my feelings, this was met with bafflement. What on earth did feelings have to do with anything, she would ask? The long list of things all our grandmothers and great grandmothers didn’t feel like doing but had to do anyway to survive was always hovering.

As a teenager, I resented not having the kind of mother my white friends had, the mothers who went on girls’ trips with their daughters, who bonded over shopping, who let their kids smoke weed in the basement under the premise that it was better to know where they were.

My mother demanded obedience. Woe betide the child who responded anything other than “Yes, mummy.” Yelling from upstairs was a cardinal sin. “Were you brought up or dragged up?” she would demand. Complaining was met with, “Ah, get on with it.”

As very young children, living in England in an entirely white town, my mother responded to the violent racial bullying we suffered with reminders that we were ahead of our bullies in the math book, or in reading. “Small things amuse small minds” was her mantra, along with “Sticks and stones.” It was only much later we found out that behind our backs, she had visited the school, and confronted the teachers. To us, she maintained the attitude that we were to hold our heads up. She wanted us to stand on our own feet.

Later, as the parts of my mother’s story clarified for me, I understood her better. My mother left Trinidad at fifteen. At the time, science was not taught in girls’ schools and my mother dreamed of being a doctor. Joining her eldest sister in London, she studied for A levels by herself, teaching herself chemistry from scratch.

When her father died, she did not have the money to return home. She once told me how at Christmas the BBC in Trinidad would play all the messages home from students away. Families would listen to hear their son or daughter send greetings and love. 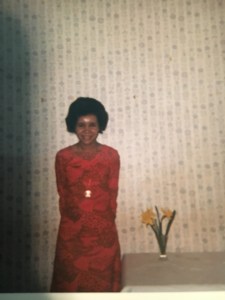 Her other sisters would send her money, tell her to buy a nice coat, to attend a play, to enjoy herself. My mother spent none of it, surviving often on an apple and coffee. When one of her sisters years later expressed a wish to return to school to become a teacher, lamenting that she could not pay for the course, my mother promptly mailed back all the money she had sent over the years. My mother told me this story in the course of chastising me for what she considered profligate spending, probably something like having more than one pair of shoes, or asking for a new winter coat when the old one was perfectly warm.

There were other ways the women in my family supported each other. To this day, my mother at Christmas receives a card from a great Aunt in New York with twenty American dollars. It was in fact only when my sister visited our family in New York that she learned that all the years the family in Trinidad was receiving Christmas boxes filled with clothes, food, and toys — believing the American family had “made it” — that she found out that our cousins grew up resenting the Trinidad family, as they went without Christmas gifts so that the family could appear to be successful in the eyes of those back home.

There were other residues of survival. The practice of women giving gold on important birthdays and dates, not because of a fondness for jewelry, but because if a woman had to flee her marriage, her husband may not have thought to take her earrings. Gold can always be pawned, my mother taught.

One time, sitting together at the Caribbean pavilion during Winnipeg’s Folklorama, a festival of culture, the Jamaican Folk singers sang a song listing different plants. My mother turned to me and informed me that those were the plants that could “bring on your blood” and “soften the womb” if your period were ever late. This was knowledge passed down from woman to woman, never called abortion, but simply accepted as a woman’s knowledge to be passed down.

Now, as a fully grown adult woman, the things that annoyed me about my mother have softened into amusement, and gratefulness. On the phone I tell her, “As much as you got on my nerves when I was younger, I’m thankful now for the resilience you taught me.”

I cannot remember my mother complaining frivolously about anything. When her mother, brother, and sister all died within two weeks of each other, the most emotion she showed me was, sitting on the stairs outside my room about to leave for a second time to the airport, she mentioned that a sister dying made you see your own death. 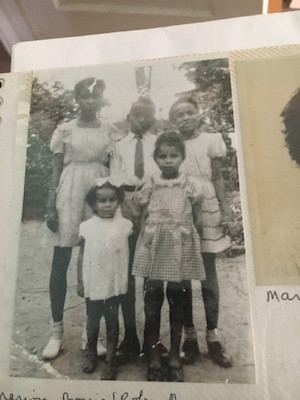 It is my mother’s strength that gives me my backbone. It is her voice, “Ah get on with it,” that sends me endurance. What I resented when younger as a lack of understanding I now appreciate as giving me that armour an argumentative Black child who cried at the endings of fairy tales would need for this world. Whatever drive and work ethic I have is my mother.

My mother’s favourite Bible verse, “What does the Lord require of you? But to love kindness, do justice, and to walk humbly with your God.” Her favourite saying, “There but for the grace of God go I.” I sometimes find, in the worst times of despair, this survival mechanism of our grandmothers bursting out of me unbidden. One morning, ironing my clothes before a sentencing, I find myself singing the hymns of my grandmother automatically, just as our great grandmothers before us, faced with what they could not change, sang.

Even now, as a grown woman, it is my mother’s disappointment I fear the most. When I have to call and tell her about a job rejection or some other failure to achieve what she would want for me, I have to steel myself, not against her criticism, but against the feeling of not living up to the legacy she carved for me.

In these times, I picture her wondering if she left home for nothing, if we could not build the lives she made real sacrifices for, the lives she held open for us when she taught us how to survive playground racism, the lives she abandoned to give us the leg up in white society we would need. My sister once told me that she believed that once Mummy had us, she felt she had to choose a world to live in, and that if she kept going back and forth to Trinidad, we would not be equipped to survive in the world we had to navigate.

On the Victoria Day long weekend, my mother calls me to sing triumphant hymns of Empire in my ear. “Red, white, and blue!” she shouts. “What does it mean to you!” She tells me again of marching around in the hot sun under the Governor’s eye waving the Union Jack. My mother, who grew up in a colonial world that was cracked apart by liberation. My mother, who still has no language for most of what I do, who fears for my safety and my financial security when I do it, who tells me not to do it, but who gave me the power, and the sense of service, to do exactly those things.

When she sings to me of Britons never being slaves now, I laugh at her, and sing along. The world my mother grew up in is gone, but the strategies she had to make it are right here, through her, with me.