You are here: Home / Featured / Is the province fixing what isn’t broken in plan to consolidate cancer care?

1. Underreporting leads to a lack of honest discussion about suicide 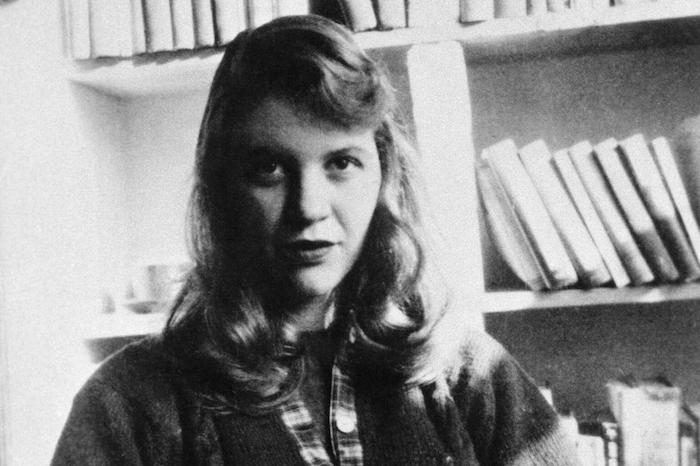 “Each day at least 10 people die of suicide in Canada,” writes Evelyn White in the Halifax Examiner, “leaving behind seven to 10 so-called “suicide survivors.”

And yet, the shame and stigma surrounding the taking of one’s own life has led to a troubling (and decidedly counterproductive) underreporting and lack of honest discussion about the problem. It’s a safe bet that many now reading this piece have been touched by suicide, whether they know it or not.

White reflects on her encounter with one notable suicide survivor, the mother of poet Sylvia Plath, whose cause of death was first announced as viral pneumonia, back in 1963.

White’s piece is behind the Examiner paywall, and well worth the price of admission. 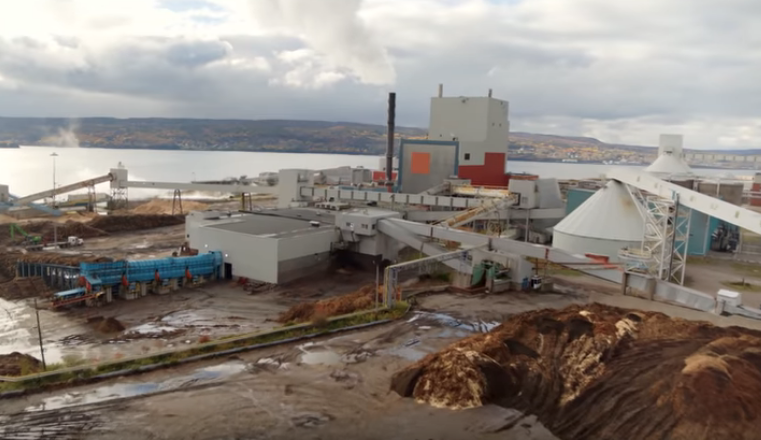 The CBC’s Paul Withers reports on a hearing this morning before the Utility and Review Board that could approve a new pricing deal between Nova Scotia Power and its largest customer, Port Hawkesbury Paper.

Under the four-year plan, Nova Scotia Power would control the supply of electricity to Port Hawkesbury Paper, with the right to direct the company to increase or reduce daily consumption throughout the year.

The rate proposal is supported by the mill, which says it needs to lower its power bill to keep its operation viable.

The rate went into effect on Jan. 1 on a temporary basis, pending the outcome of a hearing this week before the Nova Scotia Utility and Review Board.

Port Hawkesbury Paper has had a discounted rate with Nova Scotia Power since it reopened in 2012. The new proposed rate involves turning over control of electricity consumption to Nova Scotia Power, which means more efficient allocation of the electrical load, and potential cost savings for other Nova Scotia Power customers, according to Withers.

3. Former child soldiers speak to sold out crowd at Dalhousie 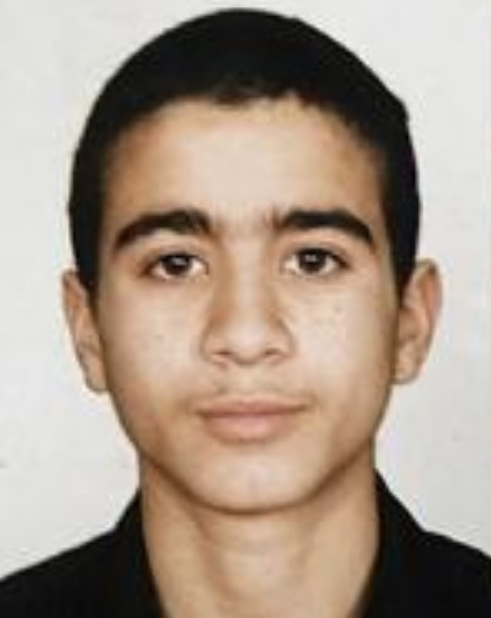 Omar Khadr before being imprisoned at Bagram Air Base and then Guantanamo in 2002 at the age of 15. Photo: Human Rights Watch

The Romeo Dallaire Child Soldier Initiative and Dalhousie’s Open Dialogue series presented a panel discussion Monday night featuring two former child soldiers, Canadian Omar Khadr and Sierra Leonian Ishmael Beah. The appearance of Khadr on the panel was controversial in some circles (the rightwing news site The Post Millenial calls Khadr a “real-life supervillain“), but Keith Doucette of the Canadian Press reported there was only a single protester outside last night’s sold out event. Doucette reports:

Beah, who has written about his two-year experience as a child soldier from the age of 13, said he has been celebrated for turning his life around from a situation where he was indoctrinated and desensitized, while Khadr has had to fight for acceptance since his return to Canada.

“Here was a child from North America who has been vilified,” said Beah. “I felt there was a dishonesty in the way people had empathy for me but not for him.” 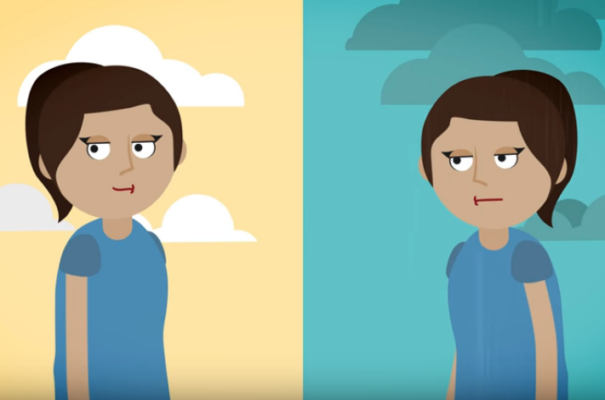 A screen capture from the IWK’s video on “choice appointments” and how they work.

Under the old model, Clark said they had a wait list of more than 1,000 children waiting for services for upwards of 20 months before they were able to even book an appointment.

Now, as soon as someone calls the central referral department, they’re booked for an appointment. They know exactly when they’re coming in and who they’ll see, Clark said.

Since 2017, the easier-to-get first appointment for a child or family is a “choice appointment” with the focus being on talking about the needs and goals of the child or family, and what resources exist to help them.

Halifax Regional Council will be asked to approve a $2 million contribution to Halifax Transit’s capital costs at their meeting Tuesday. The contribution is part of the provincial government’s Public Transit Assistance Program, which transfers another $900,000 to other transit services in the province. Considering the province’s history of simply not funding any public transit infrastructure, this $2 million is, I’m sure, welcome over at Halifax Transit and around council chambers. But it represents only a tiny fraction of what it takes to run a public transit system.  Halifax Transit’s proposed operating budget for 2019-20 is over $120 million, with a capital spending plan of another $34 million. So the $2 million provincial contribution represents about 1.3% of what it takes to run public transit service in Halifax.

Back in 2011, the Canadian Urban Transit Association took a snapshot of sources of transit funding across the country, and it showed the severe lack of provincial investment in public transit. It also showed a pattern where the larger the urban population, the greater the chance that the province contributed a share, and the larger that share would be. 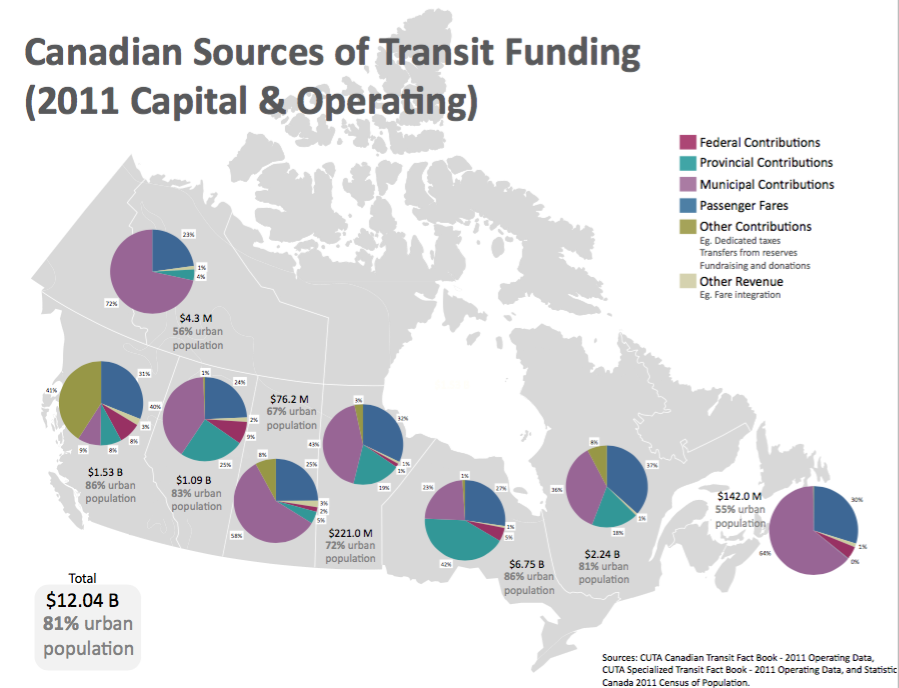 Environment Canada is calling for snow today and continuing overnight, when it will mix with rain and freezing rain, a combination you will be happy to sleep through, I’m sure.  This is the Maritimes, so betting on the weather is downright foolish, but still, who wants to take odds on kids staying home Wednesday? 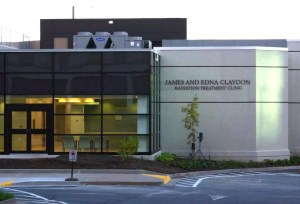 Retired doctor and former CEO of the VG Hospital Bernard Badley weighed in to the hospital parkade debate last week in a piece in the Chronicle Herald. Badley, who was also medical director of the colon cancer prevention program at Cancer Care Nova Scotia, raises concerns around the last minute decision to relocate cancer care services to the new to-be-built facility on the infirmary site. According to Badley, the decision might not just be problematic because of the controversial new parkade it proposes, but also because it’s fixing what isn’t broken, and costing the health care system millions in doing so. Badley writes that the James and Edna Claydon Radiation Treatment Clinic at the Dixon building was upgraded in 2012, is still functioning well, and will cost a pretty penny to move:

The proposed consolidation of all cancer services in Halifax to the Infirmary site would involve destruction of existing structures that have not outlived their usefulness — the Robie Street parkade, the Dickson Centre and the purpose-built and recently upgraded James and Edna Claydon Radiation Treatment Clinic.

The many millions of dollars saved by keeping these services in their current sites could be better used to meet other urgent health-care needs. At a time of increasing demands on other aspects of the health-care budget, such enormous expenditures to replicate existing facilities and services could be regarded as inappropriate, unwarranted or even unethical. 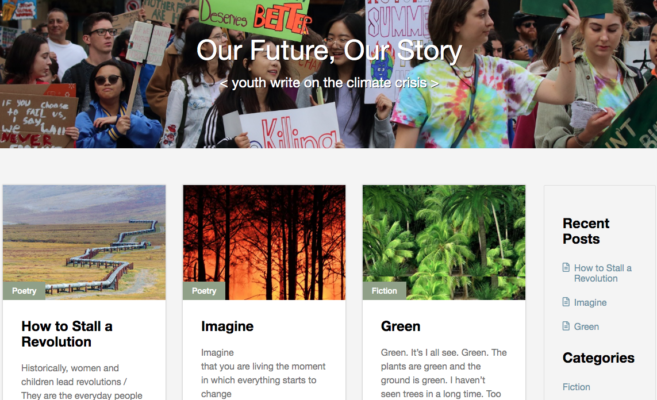 Over the weekend I had the opportunity to facilitate a workshop for youth interested in writing about the climate crisis. In my day-to-day life, I don’t have much chance to meet or interact with teenagers, so I wasn’t quite sure what to expect. Colour me impressed.

The group of fifteen kids, ranging in age from 14 to 17, were all well-informed, articulate, thoughtful and passionate. They had a clarity to their message which often gets lost in my own writing and thinking about the climate crisis. And they were all so… active.

One teen is part of a group backed by the David Suzuki Foundation suing the federal government for “violating their rights to life, liberty and security of the person under section 7 of the charter and for failing to protect essential public trust resources.” Another has been writing weekly letters to Justin Trudeau, and collecting them online in her own blog. The questions and concerns poured out of them.

One wondered how the way we build buildings might change to meet the new climate reality. Others mentioned environmental racism and inequality as areas where they’d like to shine a light. You might not think teens are concerned with the needs of developing countries trying to improve basic living standards while also staving off catastrophic climate change, but they are.

The participants will hopefully become contributors to a fledgling youth-run website called Our Future, Our Story, featuring poems, fiction, reports and essays on the climate crisis, all written by youth.

I’ll be doing a Pecha Kucha-style presentation tonight at the Halifax Cycling Coalition’s winter bike week event, Life Cycle Pecha Kucha (7pm at Seahorse Tavern). Each presenter will have 20 slides, with 20 seconds per slide to talk about, “work/experiences/projects relating to cycling, mobility, accessibility, and equity.” Come and say hi if you are in the neighbourhood.