On October 31 at 5:11 p.m., officers responded to a collision between a car and a pedestrian at the intersection of Portland Estates Boulevard and Portland Hills Drive in Dartmouth. A 74-year-old man, who was crossing in the crosswalk at this intersection, was struck by an oncoming vehicle driven by a 23-year-old man.  The pedestrian, who has been identified as William C. Lee of Dartmouth,  sustained life-threatening injuries and passed away in hospital last [Monday] night.

The investigation by the Collision Investigation Unit is ongoing and investigators are looking to speak with anyone who may have witnessed the collision.

Bill 60, which will outlaw the smoking of e-cigarettes and flavoured tobacco in public spaces, is coming right up against the operation of hookah lounges. Global TV reporter Julia Wong interviews the owners of two lounges.

Spryfield residents think that the Direction 180 methadone truck that visits their neighbourhood once a week is attracting heroin addicts from somewhere else, because there are never any heroin addicts in Spryfield when the truck’s not there.

Christmas wreaths are up on downtown lampposts, and that’s too early, says Katie MacDonald. 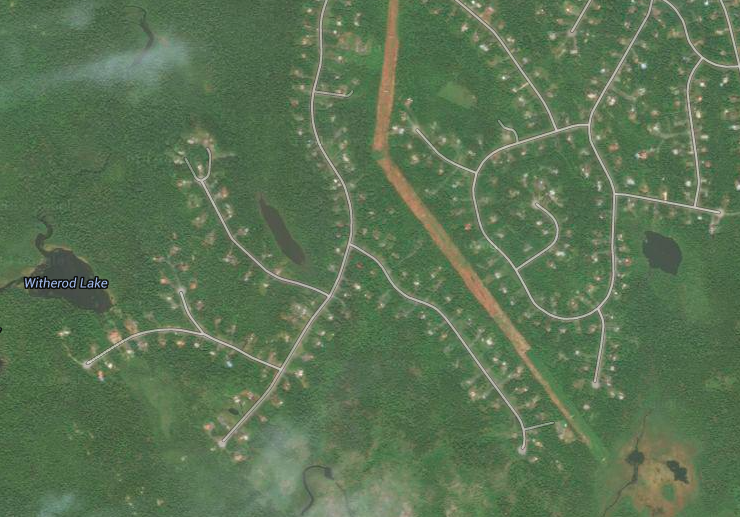 An ugly incident has upset the normal order of domestic bliss on the cul-de-sacs of Kingswood.

CTV thinks it’s strange that domestic assault can happen in Kingswood, a “quiet suburb.” Because everyone knows those nice million dollar homes are the very picture of domestic bliss, and only poor people in the noisy inner city attack each other.

Two men, both of Halifax, face charges in relation to two stabbings that occurred on Novelea Drive earlier this week.

At approximately 9:30 p.m. on Sunday, November 2, officers responded to a call of a man who had been stabbed inside an apartment in the 3300 block of Novalea Drive. Upon arrival, officers located the victim, a 36-year-old man, with numerous stab wounds to his body. He was transported to hospital by EHS for treatment of non-life-threatening injuries and later released.

At 2:10 a.m. on Monday, November 3, officers responded to a call of an injured person at the corner of Novalea Drive and Duffus Street. Upon arrival, officers located a 44-year-old man who had multiple stab wounds. He was taken to hospital by EHS for treatment of non-life-threatening injuries.

Forty-four-year-old Darren Donald Burke and 36-year-old Paul Shane Miller were arrested in the early morning hours of November 3. They are scheduled to appear in Halifax Provincial Court today to each face charges of attempt murder, aggravated assault, assault with a weapon and possession of a weapon for a dangerous purpose.

These incidents are not random as the two victims are known to one another and live at the same address.

Green crabs have invaded our waters. Chronicle Herald reporters are still on a byline strike so I don’t know who to credit for this article, but it’s informative and well-written.

“All that’s required for journalists in Halifax to properly do their job is to be independent and curious, to question everything and, when necessary, to reject the party line,” I wrote yesterday. “Unfortunately, even that is beyond the abilities of the Chronicle Herald business section, which has played the role of a Canadian Pravda, unquestioningly repeating official propaganda, kowtowing to the powers that be, and airbrushing inconvenient truths out of the official record.”

2. Another pro-fracking op-ed piece in the Herald

Former New Brunswick Premier Frank McKenna, who has been richly rewarded for his subservience to corporate interests with a seat on the board of the TD Bank Group, tells us to shut up and let the big money boys frack already.

3. Not another pro-fracking column in the Herald

Well, except it is.

Public Accounts (9am, Province House)—the witness is Murray Coolican, the deputy minister of the Department of Energy, to be asked about “Energy Development and Opportunities.”

The province is tendering for design work for a new Prince Arthur Junior High School in Dartmouth. The existing school was built in 1955.

I2A: Formulating (big) Data Science Innovations for All (Thursday, 11:30am, Room 430, Goldberg Computer Science Building)—Una-May O’Reilly, from MIT, explains her talk like this:

In the spirit of B2B and B2C transactions the ALFA* group at MIT CSAIL ** is formulating I2A: Innovators to All. A (big) data science group, with foundations in scalable machine learning and evolutionary algorithms, we work on extracting insights from data in domains of social relevance. I will describe the range of our machine learning platforms including Delphi, a multi-parameter, multi-algorithm SaaS and one of our projects related to medical research (BeatDB). Time permitting, I will describe our mission to seed community-based MOOC analytics by developing a global data standard and MOOC-customizations that engage the crowd for its help.

I so hope time permits.

Architecture (Thursday, 6:30pm, Auditorium, Medjuck Architecture Building)—Pedro Gadanho, the Curator of Contemporary Architecture at the Museum of Modern Art in New York, will talk on “Displacing the Architect.”

The LA City Project (Thursday, 7p, Ondaatje Auditorium, McCain Building)—Robert Garcia will talk. He is a civil rights lawyer and founder of The City Project, which focuses on accessibility for public spaces.

Indian Logic as Semiotics (7pm, KTS Lecture Hall, Academic Building)—Sundar Sarukkai, from Manipal University, India, “will discuss how Indian logic can primarily be viewed through the language of semiotics. Buddhist logic and later logical traditions in India analysed inference in terms of valid ways of inferring the signified from the signifier. He will also describe other unique conceptual categories that are part of Indian logic and discuss the possibility of an alternate rationality based on these ideas.” 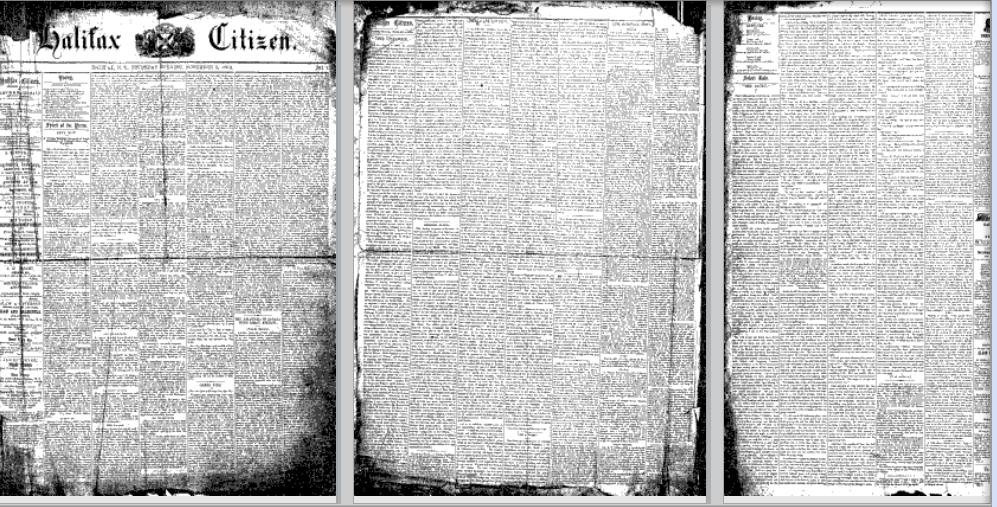 On this date in 1863, the Halifax Citizen began publishing. It was a “tri-weekly evening paper,” and it continued publishing weekly through 1873. Many editions of the paper have been put on Google Newspaper.

I’m a sucker for the old newspapers. I love the big broadsheets, with their gigantic walls of text, harkening back to an age when people could read without having to have a gazillion graphics to keep their attention. I seriously thought about making the Examiner a broadsheet, but printing costs precluded it.

I hadn’t been familiar with the Citizen before this week, and I’m not sure what to make of it. Looking at the then-raging US Civil War, it actually cheered on the destruction of the United States:

…We believe the souther section of the Union did thus injure the North. And with all our admiration for their gallantry in this war, we cannot, with our fierce British feelings, shut our eyes to their vulgar affectation of aristocracy, or their selfish disregard of human rights. But the North would not look at them as slaveholders; would only look at them as fighters. Viewing them in the same light we see that they are the better fighters. Both on land and sea they fight against such odds so bravely that we must heartily admire their manly valor. And such we think separation the inevitable end. The North will not so fight for liberty to the slaves as to win sympathy or deserve success. The Democratic section will not convert a human chattel into a freeman on any terms; the Abolitionists are too weak to effect this alone. The old Republic was becoming too disorderly and selfish a power among nations; its insolence was equal to its immensity. Popular prejudice carried the day against old established principles; the masses were become so despotic that little room was left for Liberty. Humanity and civilization have much to gain from its partition, and it is therefore evident that as the final severing of the Union is inevitable, it is also best. 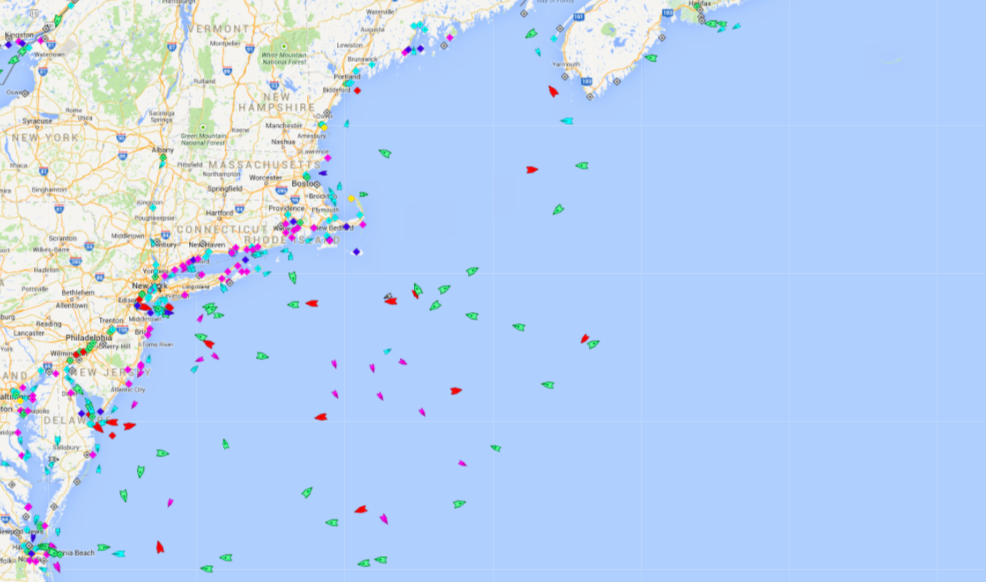 Lots of email to answer, yep.