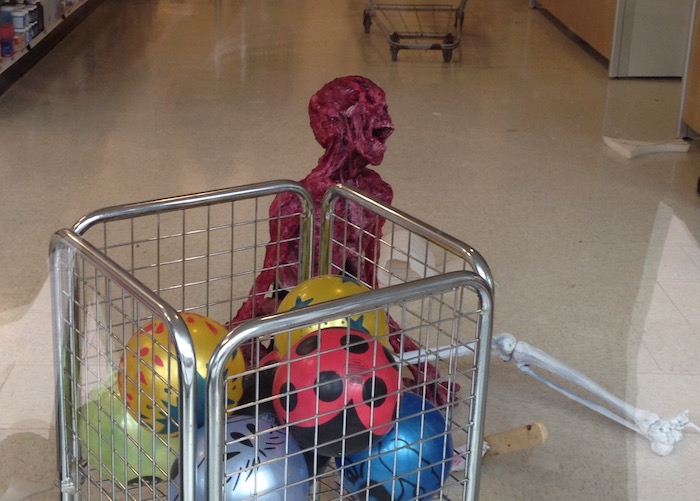 This prop in the Bedford Place Mall was created for the TV show adaptation of Stephen King’s The Mist. Photo: Jennifer Henderson

After a disastrous season last year, filmmakers have seen an uptick in productions this year. But will the work keep coming?

I listened to two lectures yesterday.

The first was via one of the podcasts I listen to as I travel around, in this case a London School of Economics podcast. As I took the bus downtown to get my mail, and then walked up to Dalhousie, I was listening to Thomas Frank plug his new book, Listen, Liberal!. 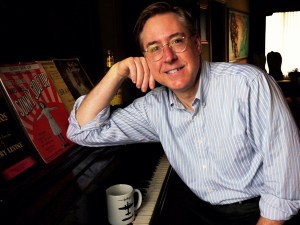 I’ve been reading Frank for what seems like forever, but definitely at least since his 2004 bestseller, What’s the Matter With Kansas? was published. I also have repeatedly linked to his hilarious essay in The Baffler, “Dead End on Shakin’ Street,” in which Frank deconstructs the word “vibrant.”

In Listen, Liberal!, Frank discusses how the US Democratic party has abandoned its traditional support for the working class. Here’s the podcast description from LSE:

Financial inequality is one of the biggest political issues of our time: from the Wall Street bailouts to the rise of the One Percent, who between them control forty-percent of the US wealth. So where are the Democrats — the notional ‘party of the people’ in all of this? Author Thomas Frank will examine how the Left in America has abandoned its roots to pursue a new supporter — elite professionals — and how this unprecedented shift away from its working-class roots ultimately deepens the rift between the rich and poor in the US.

In the lecture, Frank describes how the Democrats have embraced supposed meritocracy and have abandoned solidarity. Never mind that the Ivy League grads who rise to the top of American liberal circles were born with silver spoons in their mouths or that this is essentially an upper class circle jerk, the mythos is that the technocrats and financiers are super smart and effective and deserve all the riches they amass. Ignore the smouldering wreck of the global financial system brought down by the very same people — “they’re innovative!” says Frank, mockingly.

I was walking to Dal to hear the second lecture: Peter Nicholson was talking to the Dalhousie Board of Governors about “The Importance of Research and Innovation to Nova Scotia’s Future.” 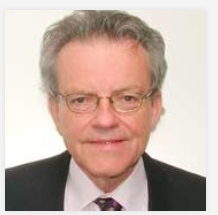 Nicholson, a Dalhousie grad, is the uber Liberal. He was a Liberal MLA back in the 1970s, and went on to become an advisor to Liberal Prime Minister Paul Martin. Along the way, he’s served on various government boards, and of late has become an “innovation” guru. And now the provincial Liberal government has hired Nicholson to corral us all onto the innovation bandwagon; he was a co-author of the “We Choose Now” report, which Nicholson explained was too abstract for policy makers, and so he has now written a “New and Better Ways: A Field Guide for Nova Scotia’s Innovation Ecosystem.” This report, he said, is much more “granular.” Granular will be the next buzzword sweeping the province.

Nicholson is an engaging, likeable speaker. He had a series of PowerPoint slides detailing what he described as the economic and demographic challenges facing Nova Scotia, and what could be done about it (hint: it rhymes with tinnovation).

Early on in the lecture, Nicholson showed a slide with the basic definition of GDP, reducing it to per capita production times population. “This is just math,” he said, explaining that to increase GDP, you either had to increase production or increase population. Refreshingly, Nicholson admitted that despite a recent increase in immigration, Nova Scotia’s demographic trends are downward and that won’t change. That leaves the productivity side of the equation. And we can only increase that through innovation, which he broadly described as “new and better ways of doing valued things.”

Well, sure. It is just math. And that’s the problem. The GDP formulation is inarguable. But should an increased GDP necessarily be the one and only goal of policy makers? Should it be a goal at all? And throughout his presentation, which was entirely internally consistent, he never touched on issues of distribution of wealth and profit, or retention of capital, all of which, I would argue, are primary economic issues facing us — far more important than increasing GDP.

At one point, Nicholson showed that in terms of dollars invested per capita, Nova Scotia was the third-ranked province in the nation for Research and Development. But, the component of those dollars coming from private industry was the last in the country, while the component coming via university research was the highest. In Nova Scotia, innovation is government-directed.

As Nicholson was talking, I kept thinking back to Frank’s lecture. Nicholson was essentially arguing that meritocracy should be rewarded with government financial support. There is an obvious chicken/egg problem here: those who get the support will necessarily be more successful innovators than those who don’t, and that success will prove their merit.  Workers? Meh.

I fear that the Nova Scotia Liberal Party is talking the same meritocracy game as the US Democratic Party, and it will inevitably lead to similarly disastrous results.

In any event, after he spoke the floor was opened to questions from the Board. To my dismay, not a single critical or skeptical voice was raised. Think about this: these are supposedly the brightest and most insightful minds in the province, picked to run our premier research university, and none of them could mouth a dissenting word about the innovation bandwagon.

This is no small matter. As Nicholson noted, over half the throne speech last week was devoted to “innovation” and matters he says are raised in his Field Guide. Hundreds of millions of dollars are being directed into the various innovation programs. Isn’t a critical voice necessary? Shouldn’t academics and opposition parties and other inquiring minds want to unpack this?

Last night, Nicholson kindly sent me a copy of the as-yet unpublished 150-page Field Guide, noting that he’s still discovering typos but it won’t materially change. I haven’t had time to read it, and I haven’t had time to do more reporting and research around this issue. I intend to, but I can’t do this alone, nor should I be the only person looking at this with skepticism.

Therefore, I’m posting the Field Guide for others to examine:

Part 1 of the Field Guide

Part 2 of the Field Guide

I’d appreciate any thoughts from readers. 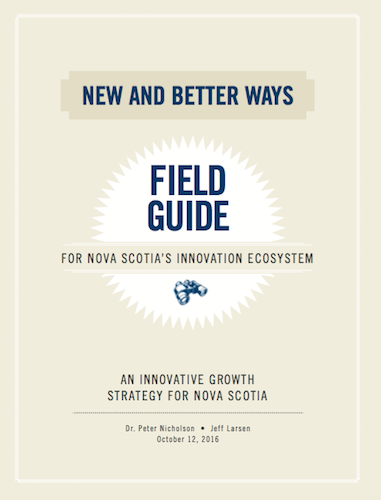 “Some P.E.I. government emails and records about the province’s [PEI’s] e-gaming scandal were deleted, but it appears no one will be reprimanded, partly because no actual penalties currently exist,” reports Teresa Wright for the Charlottetown Guardian:

[Finance Minister Allen] Roach says he was “as surprised as anybody” to learn government emails had been destroyed.

He said the law, as it is currently written, has no sanctions for those who break it.

That’s why sanctions will be added, he said.

“We have to look at the act because right now, that accountability is not in the act,” he said.

Government does have servers that back up emails and records, but Roach explained these servers are mainly designed to help in the case of a major disaster. As such, they only retain information for one year.

From a police email to reporters at 7:30 last night:

Halifax Regional Police are on the scene of a pedestrian  motor vehicle collision, at 60 Tacoma Dr in Dartmouth, the Sobeys parking lot. At 5:50 pm a woman was walking in the parking lot of Sobeys when she was struck by a car. She was transported by ambulance to the hospital with life threatening injuries. The driver and vehicle remained at the scene, waiting for emergency crews to attend. Halifax Regional Police  Accident Investigation Unit has been called out and will be continuing the investigation at this time.

An update was sent to reporters at 4:45 this morning: 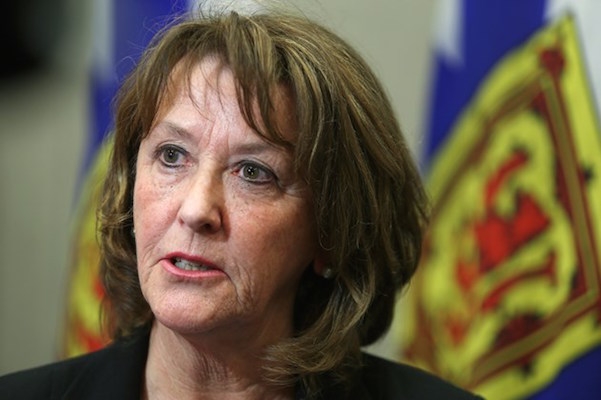 “Having taught for 18 years, I cannot recall any time in my career when educational reform has been less collaborative, meaningful or affirming of the work I do,” writes Paul Wozney, a teacher, for Local Xpress:

[Education Minister Karen] Casey is possessed by the conviction that she knows, better than thousands of teachers across the province who have begged for decades to be involved in leading from the bottom up, what’s right for our schools.

Her leadership over the education dossier can only be characterized as hostile, self-serving and tone-deaf. It should seem no small wonder to any Nova Scotian that over 9,000 public school teachers have stopped trying to reason with such an individual and resorted to a No vote so profound that it cries out for a solution to the problems that can no longer be ignored in our classrooms after decades of neglect.

Number 2 – Who in their right mind is going to purchase greenery for the Christmas season mid-October … it’ll all be dead by December.

I am still shaking my head. Maybe Sobeys need to give their head a shake too.  For the life of me, I do not get it. Why does retail do this?

The Fire of Life (4pm, Theatre A, Sir Charles Tupper Medical Building) — Daniel Kane will speak on “Stoking the ‘Fire of Life’: Exercising Mitochondria for Health.”