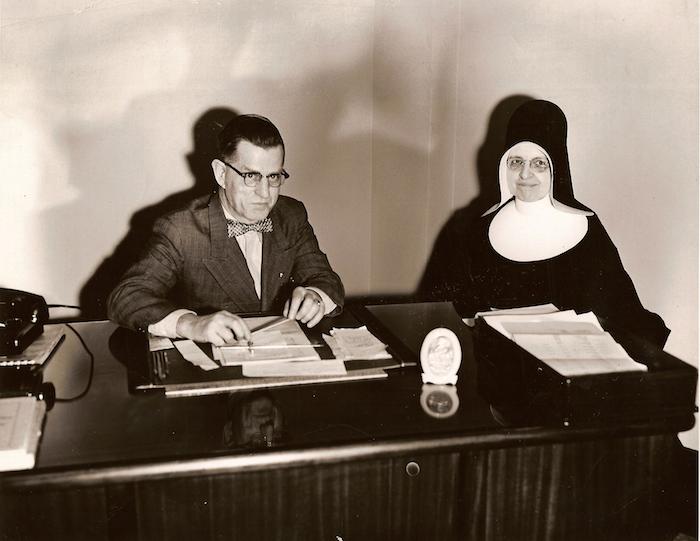 The roof on the former St. Patrick’s High School collapsed this morning, evidently from the weight of the snow. The building, which was vacant at the time of the collapse, has been scheduled for demolition.

Six HRSB schools are closed today due to excessive snow loads on their roofs.

CBC announced a series of cutbacks and layoffs yesterday. Nationally, 244 people will lose their jobs; that includes 11 people in Nova Scotia — 10 in Halifax and one in Sydney. An un-bylined local CBC reporter interviewed King’s Journalism School prof Stephen Kimber:

“It’s just one more cut in a whole series of cuts. We’ve gone from trying to do more with less, to trying to maintain with less, to making less look like approximating more. You can only do that for so long, and the core of what the CBC is trying to do becomes so badly undermined that it can’t be recovered,” he said.

“One of the things I see as an outsider that surprises, shocks and saddens me is that there’s nobody on the inside of the CBC, at the top ranks, speaking up for public broadcasting,” Kimber said.

Kimber said the CBC is one of the most underfunded public broadcasters in the world. “Canadians value the CBC. This little-by-little cuts makes it harder for people to get on board and say this is wrong, we’ve got to stop it.”

He said the newsroom does a great job. “Think what it could be if the CBC was funded properly,” he said.

I estimate that when I arrived in Halifax in 2004 there were about 300 working journalists in Halifax. Now there are fewer than 100.

CBC reporter Pam Berman dug through council documents and discovered that the city had made a previously undisclosed deal to cut the property taxes on the Irving Shipyard:

“It’s very complicated,” says Greg Keefe, the city’s chief financial officer. “So we just thought to try to avoid years of appeals and court cases we’d try to come to an agreement ahead of time.”

Keefe confirms the proposed deal is a long term one but won’t discuss any details.

As spelled out in the city document:

Berman looks at the assessment from last year, $39 million, and compares it to this year, $56 million, but there’s a bigger picture. Here’s the recent assessment history of the shipyard property, from the Property Valuations Service Corporation:

An increase of $580,000 in the tax bill would reflect the increase in value from 2013 to 2014 without any deal, so the deal must use some earlier date as a starting point for the agreement. The council report doesn’t given any further details; without knowing that starting date, it’s impossible to say how large the tax break is. It’s worth noting, however, that the entire increase in value is due to the shipyard expansion, which itself was funded by tax dollars. 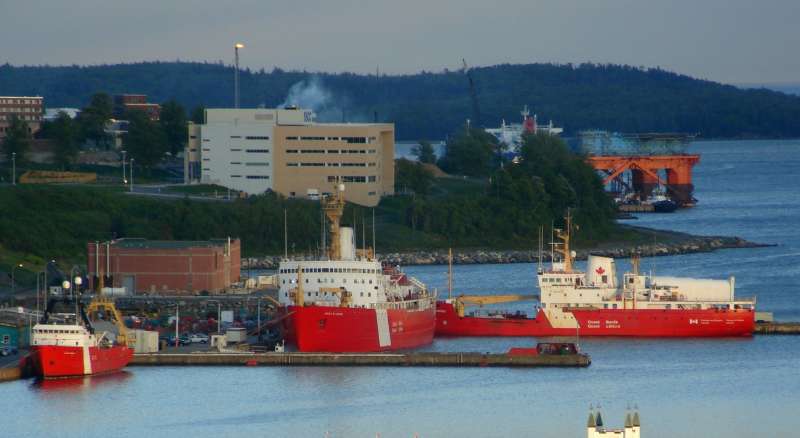 The Dartmouth Coast Guard base, in 2008. Photo: hipspotting.com

Yesterday I reported that Waterfront Development is going to buy the former Dartmouth Coast Guard base and turn it into an “ocean innovation centre.” I then noted that:

There’s no word on what exactly an “ocean innovation centre” is, what that’s going to cost, or who’s going to pay for it.

This prompted a round of discussion on Facebook. John Wesley Chisholm posted that the announcement of an ocean innovation centre is:

Another triumph for form over substance, mistaking the symbol for the thing symbolized. If only they could name even two people who actually have the ideas, capitial and resources that need to be brought together in “synergy”… even one single example of what they are actually talking about here. My sense is, they got nothing and every person in Nova Scotia who actually has an innovative interesting creative notion about ocean science will have to succeed in spite of these folks. It’s just damn discouraging for everyone.

Tim Bousquet asks the simple question, what is this thing? I don’t think he’s being rude and negative. He’s just doing some basic inquiry. Beyond the jargony press release praise, what exactly is it? What is one specific wealth creating thing that could be done there? How exactly does it nurture anything? Where exactly is the demand for this coming from?

So here’s the thing — I have been asking the same question of provincial politicians all day and thus far have not received an answer. Dalhousie recently opened the Oceans Excellence Centre directly next to the National Research Council. Both facilities have incubator space (that is virtually empty at NRC), access to scientists and their toys (serious research toys like you would not believe), proof of concept studies for SMEs, the list goes on forever. And now the province is spending $6.5m to purchase (and god only knows HOW much to retrofit) this old building because they “HOPE” it might attract researchers. You know we also have the Bedford Institute of Oceanography, right?! THIS, my friends, is one shining of example of why Nova Scotia is now on life support. One more colossal mistake like this could see us on DNR status. This is not innovative.

I don’t know. Simply securing the Dartmouth waterfront site might be worth the $6.5 million purchase price, but, as I said to Babb, if we’re going to spend, what? $20 million, $30 million, $100 million on something, shouldn’t we know what the heck it is? This “ocean innovation centre” sounds like utter bullshit, an idea cooked up in some ministerial back office and foisted upon the public without any obvious discussion, consultation, plan, or even asking the question: Does this make sense?

Perhaps the best comment on the issue comes from Vive L’éveil:

If they want to invest in marine and biology institutions, the Life Sciences Centre at Dalhousie is leaking from every corner, reeks like mildew and mould, and is in need of some serious windows.

Maybe throw the future scientists a little bit of a bone!

Silly Vive, whatever the ocean innovation centre is, it’s not about students or young people, or for that matter about science or even the ocean. It’s about making rich people even richer. Undoubtedly, it’s going to be a vehicle for subsidies for connected people and their businesses.

Well, last week Stephen McNeil finally agreed to what the four health-care unions had proposed back in August 2014 with regard to merging health authorities.

So far this week, he had a meeting with Premier Brian Gallant of New Brunswick and gave concessions to a New Brunswick trucking firm. A bakery that has been in Halifax for 108 years is moving its operation to New Brunswick, and now the ferry from Digby to Saint John, N.B. will be operating on a reverse schedule, leaving Saint John in the morning and arriving in Saint John in the evening, so all these people can find accommodations in New Brunswick. This is really going to affect the tourist operators in Digby.

Now, as long as we have such a savvy negotiator as Premier McNeil at the helm, we should be out of business by the time his term is up.

Audit and Finance Committee (10am, City Hall)—there’s no obvious big issue on the agenda.

Nova Scotia Business, Inc. is going to London this summer.

This is what drives so many people up the wall about Obama: he seems to get it, has all the rhetoric down, but then his administration makes policy that is 180 degrees apart from the talk. Obama’s Justice Department is “busting growers who operate in full compliance with state laws, vowing to seize the property of anyone who dares to even rent to legal pot dispensaries, and threatening to imprison state employees responsible for regulating medical marijuana,” reports Rolling Stone.

Obama’s drug policy was hailed as revolutionary by the press even as the Drug Enforcement Administration wreaked havoc on medical marijuana communities in California, Colorado and Montana during his first term. On September 25, 2012, in the midst of re-election season, the DEA tried to shut down more than seventy medical marijuana dispensaries in and around Los Angeles. According to LA Weekly’s reporting at the time, “Federal authorities sent warning letters—which tell operators to shut down—to 68 stores. Additionally, three shops were hit with asset-forfeiture lawsuits and another three were raided via search warrant.”

The same year, the Marijuana Policy Project reported that:

While significant portions of the [US federal] budget are dedicated to harm reduction and abuse prevention programs, many of the “drug war” methods that have proven ineffective over the last 40 years — particularly those used to enforce marijuana prohibition — will likely see funding increases this year. Domestic law enforcement is slated to receive $9.4 billion, a $61.4 million increase from last year. The Department of Defense Domestic Counterdrug support program will get nearly $150 million this year, a $124 million increase. Over $4.5 billion will be spent on federal incarceration of drug users and distributors. In addition, the Obama administration has requested the revival of the Youth Drug Prevention Media Program with a $20 million budget. Studies have shown that this program had the opposite of the intended effect on teens, and Congress allocated no money for the program last year.

But Obama’s favourite Wire character is Omar, so I guess we can overlook the thousands of people his administration has thrown in jail on non-violent drug charges. 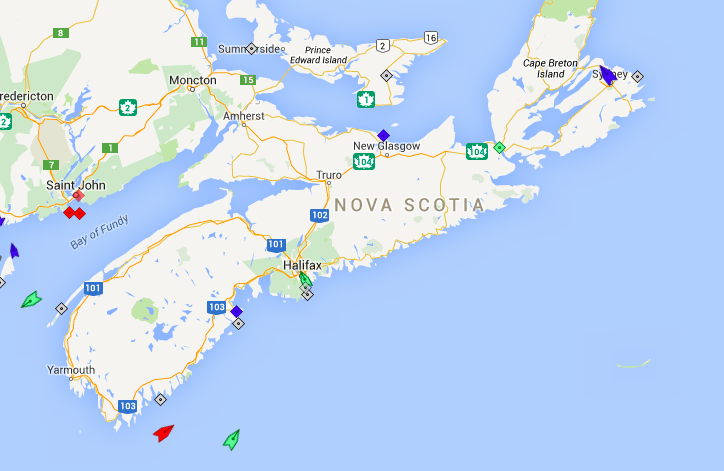 The seas around Nova Scotia, 8am Friday. Map:marinetraffic.com

It’s too early to say for sure, but Enviro Canada says we might get “significant snow” tomorrow.