Today’s Morning File is written by Halifax Examiner transportation columnist, Erica Butler, who will probably never win a race against a bus.

To no-one’s surprise, NDP candidate Lisa Roberts handily won a seat in the provincial legislature last night, representing Halifax-Needham.  Now we can get back to speculating on when the Liberals will call the next general election. 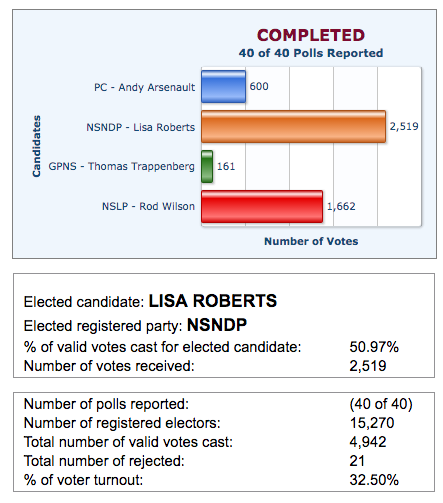 The unofficial results for Halifax-Needham, from Elections Nova Scotia.

The voter turnout was a poor 32.5%.  Though for an election called over a summer long weekend (my enumerator even complained to me about the late start that resulted), and taking place the last week before school, perhaps we shouldn’t be too hard on the citizens of Halifax-Needham for their poor showing.  It’s the politicians in charge who decide when to call elections, and they tend not to consider pesky things like voter turnout, at least if ex-politico Graham Steele is to be believed.

2. Union estimates Herald has spent $400,000 on security since strike began 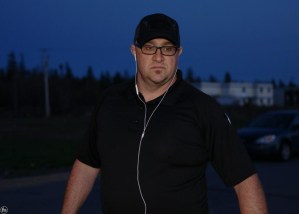 Chris Van Luven charges the Herald $525/day, according to the Halifax Typographical Union.

The Halifax Typographical Union has called out the Chronicle Herald on Facebook for paying Vancouver-based security firm Mitigation Partners “more per hour than HTU members were to deliver the news of the day.”  From HTU’s post:

The Herald pays private investigators $42 per hour to spy on union members virtually every day, usually for an average of 15 hours a day. This costs the Herald about $5,000 a week or more.

3. Rent strike countdown back on in Spryfield

Just as concern over a postal strike eases up, a group of Halifax tenants are counting down to a possible rent strike, reports the NS Advocate.  Residents of Greystone in Spryfield are giving the province 30 days to complete requested repairs before they start paying their rent to the Tenancies Board instead of their landlord, the Metro Regional Housing Authority. Residents are dealing with things like mould, rodent and bird infestations, and water damage.
There’s a Facebook group  for residents to share information and even lend each other a hand doing repairs.
Back in June the NS Advocate published a slideshow featuring some of the repair issues in Greystone.

The province has issued an RFP for a consultant to form and run a Community Liaison Committee for the twinning of highway 101 from Three Mile Plains to Falmouth.
This 10.8 km stretch of highway ranked fifth out of eight stretches of highway studied recently by CBCL, who assessed different stretches on safety, traffic volumes, cost vs. revenue, travel time and travel cost savings, environmental concerns, and land acquisition.
No other RFPs have been issued regarding the other seven stretches of highway listed in the report, and it’s not clear why the government is starting with the fifth-ranked Falmouth stretch, which will cost an estimated $140 million to build. 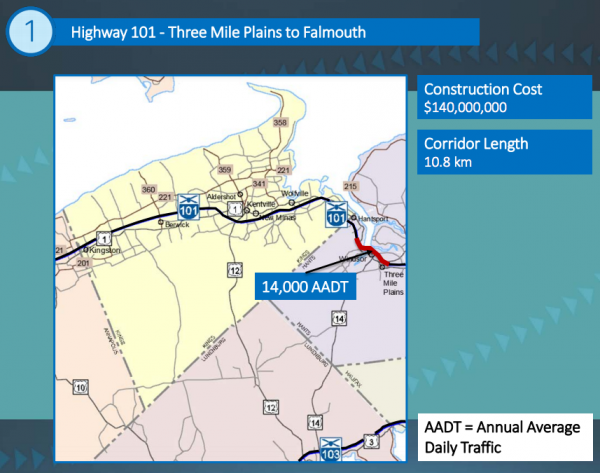 The Falmouth stretch, from CBCL’s feasibility study on twinning highways in Nova Scotia. 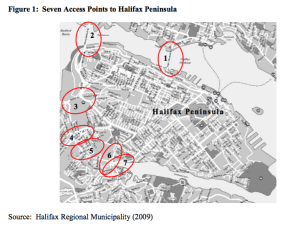 1. Is congestion pricing part of our transportation solution?

In my weekly transportation column for the Halifax Examiner, I explore the idea of congestion pricing, based on two recent reports.

It turns out that congestion pricing could dramatically affect the success of ideas like commuter rail, high speed ferries, or bus rapid transit in Halifax, and we might need to consider it as part and parcel of these higher orders of transit.

This article is behind the Examiner’s paywall, and so is available only to subscribers.

Check out your subscription options here!

The wonderful photo/video project Halifolks has documented a runner racing the #1 Spring Garden from Scotia Square to the Mumford Terminal, and winning. Minh Tan says that he’s raced the bus about 50 times over the years, and wins about half the time. Extra points go to “Brad the bus driver” for the classy move of handing Tan a brand new transfer to get home. And for his parting words: “Remember, yield to the bus, people!”

I got to vote yesterday, so that feels nice.

I’d like it to feel even nicer, so I’m paying attention to the people over at Fair Vote Halifax, who happen to be hosting a discussion tomorrow night.  Check it out, why don’t ya?

And as always, please consider subscribing to the Examiner. Just $5 or $10 a month goes a long way. Or, consider making a one-time contribution via PayPal. Thanks much!