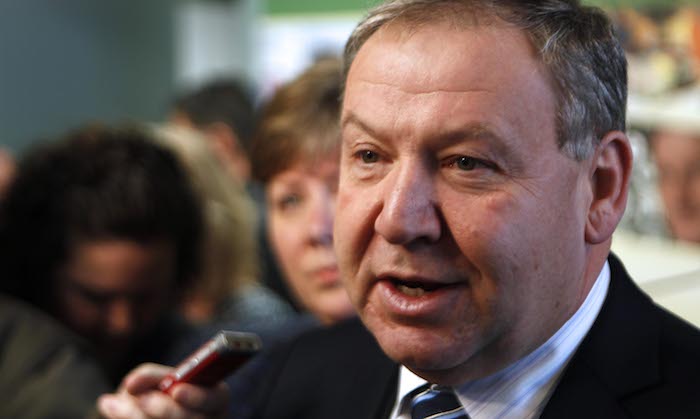 The Halifax Examiner has started a free weekly podcast. It will always be posted on the website, but will also soon be available on iTunes. Here’s the first edition:

Social dislocation leads to addictive behaviour, says Bruce Alexander, an emeritus professor of psychology at Simon Fraser University. And the strongest addiction of all in our capitalist economy is to mindless consumption, which is destroying the earth.

I guess it doesn’t matter any more, but it’s snowing this morning. One upside of all this winter’s misery is that there’s been a noticeable and welcome decline in the number of pedestrians struck by drivers. This doesn’t surprise me: drivers are driving slower in the icy conditions, and are therefore more aware of pedestrians and have better reaction time.

At least three grounded ducks have been reported on Prince Edward Island. 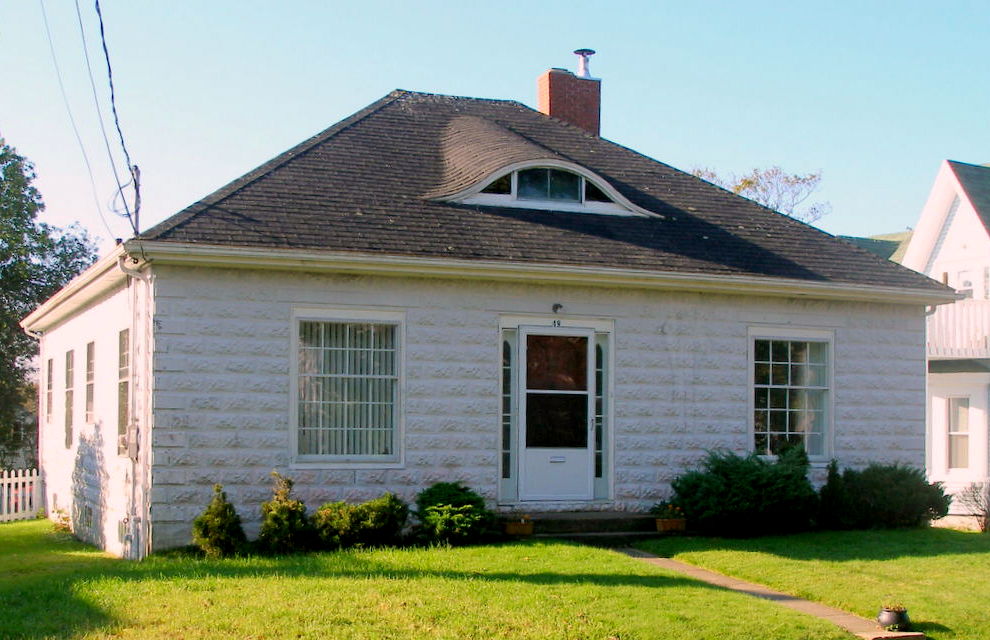 Following up on last week’s posts about Scottish dormers, Stephen Archibald today gives us a more generalized tour of dormers in Nova Scotia, including this photo from Yarmouth. “I’ve always been a fan of eyebrow dormers that seem to push up from the roof,” he explains.

“It’s difficult to see Education Minister Karen Casey’s decision to cut off funding for the Council on African Canadian Education (CACE) as anything but vindictive,” writes Stephen Kimber, who goes on to give the history of the dispute over the naming of the Africentric Learning Institute.

I’ll leave the naming issue aside, but Kimber dismisses the stated reason for defunding CACE — troubling audits of the organization as irrelevant to the defunding of CACE. I fear he may be wrong. A source with knowledge of the details of the audits tell me that are bad — very bad — and the fact that alleged misappropriation of funds went on for so long reflects badly on the bureaucratic staff in the Department of Education, which should have had much better oversight of CACE. I haven’t been able to independently verify my source’s allegations, but the fact that the case has been turned over to police suggests they may have merit. If so, we will soon see a governmental scandal of the first order.

Most of those polled on Bill C-51 were completely unaware of its contents.

“Every mainstream media outlet in Canada is reporting that 82 per cent of Canadians support Bill C-51, the Harper government’s proposed “anti-terror” legislation,” writes Bruce Wark, who then goes on to show how the Angus Reid poll is not reliable:

The Pew Research Center in the U.S. warns that online polls have their limitations. For one thing, participation is limited to people with access to the Internet. For another, online polls like this one, are based on panels of people who volunteer to fill out surveys in return for small amounts of money, a chance to win prizes and the promise that their opinions will influence elite decision makers. (See below for more details on the Angus Reid panels. For more detailed information about the limitations of online polls, see this 2010 report from the American Association for Public Opinion Research.)

Even if we suspend concerns about the accuracy of online surveys and assume this one does accurately reflect Canadian public opinion, the poll shows that more than half of those who took part knew little or nothing about Bill C-51. In fact, only 18 per cent of those surveyed seem to have paid much attention to media reports and what friends and family had to say.

So why attach any significance to this poll?

Well, it’s an election year and for months, journalists have been scrambling to figure out which issues may favour one party or another. It’s part of the media fascination with the political horse race, who’s gaining and who’s losing. And the polls, with their seemingly precise numbers, seem to offer answers.

As they say, perception is reality.

“Gee, I wonder where ISIS got that idea?”

I, Calvin George, and my wife, Martina, recently took a vacation to Orlando with Sunwing. The week there was amazing. Our trouble started on our journey home, Flight WG037 from Orlando to Halifax on Feb. 15, 2015. Halifax was in the midst of a terrible snowstorm, the entire city was shut down! Including the airport, all roads and highways, even the military base due to the treacherous conditions. You don’t have to be a scientist to know that the flight never should have left Orlando in the first place. However, the complaints that I am bringing forth in this letter have absolutely nothing to do with the weather (as I am sure Sunwing will try to use that as a scape goat). The problem started when we finally landed in Montreal, Quebec. 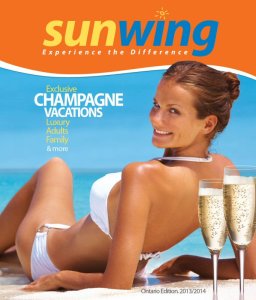 This Sunwing employee was frolicking on the beach instead of helping stranded Maritimers.

I have 65 signatures and some testimonials that will point to nothing short of inhumane treatment and this is our story:

After a delayed departure (already on board the plane), and five hours on a three-hour flight to Halifax, one hour circling Halifax (hoping to land) and then redirected another one hour until we finally landed in Montreal. We were able to disembark our plane, where we were instructed by the stewardess to go through customs and then to baggage claim for our luggage, where we would receive further instructions.

Upon arriving at the baggage claim, there was no representative to inform us of anything, or any sign of our luggage. We did find someone working at the airport that was unable to answer any of our questions. Finally, after many complaints and explanations of passengers who had health issues on the flight, they started giving us our luggage, three hours after arrival, and not all baggage was received.

Even though we already passed through customs we were still in a secure area, separate from the regular flights, where we had no access to food or water. There were several children on this flight, including a 10-month-old, who had not eaten for several hours, their parents were begging for food, just something to eat, even so much as chips, candy or chocolate, anything to help their very hungry children. And there was even a gentleman with a heart condition, he only has a 26 per cent heart function, who was 4.5 hours behind on medication because it had to be taken with food. And a senior with diabetes. We were all denied food.

Other testimonies and issues include:

• No assistance for senior in wheel chair.

• No access to strollers as they were still under the plane.

At least 500-1,000 passengers from other reroutedairlines had passed through quickly and efficiently while we were all still stranded and ignored!

It wasn’t until around 8:30 p.m. that somebody finally came to hand out meal and hotel vouchers, which had issues all of their own!

The list continues but I will save that for the media!

Districts 7 & 8 Planning Advisory Committee (4pm, City Hall)—the committee will look at revisions in the regulations of residential conversions on the peninsula because “staff have been alerted to issues in the zone which would allow unlimited number of bedrooms in each unit.”

Website—last year the city “refreshed” its website in such a manner that everyone lost their bookmarks and google search results. Today, the city has issued a Request for Information looking for a vendor to rebuild the website yet again. Here’s my favourite part of the RFI:

Transformation; Transform; Transformed – is terminology adopted by the Municipality and is intended to convey the municipality’s goal of becoming a leading multi-channel, information and service delivery organization. 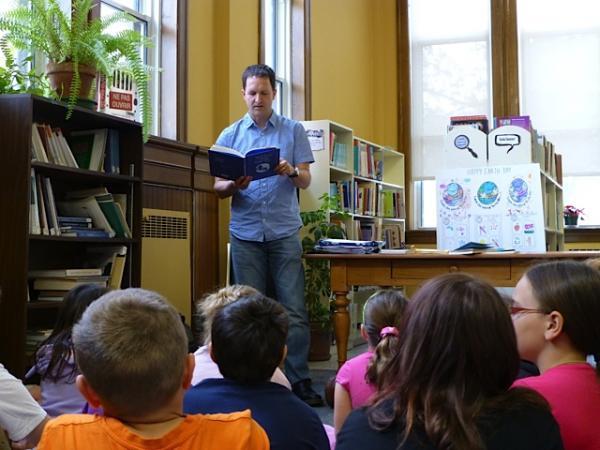 JonArno Lawson (Monday, 10:30am, Rowe 5053)—”Ontario poet, JonArno Lawson will be discussing how he writes and assembles his books, and the process of publishing, as well as his interactions with students in the workshops he conducts. His most recent book, Sidewalk Flowers (Groundwood Books), illustrated by Nova Scotian, Sydney Smith, [was] launched on March 1st, 2015 at the Halifax Central Library.”

CNIB Dining in the dark (Thursday, 5pm, Dalhousie McInnes Room, 6136 University Ave)—I’m putting this out a little early so those interested can reserve seats. Says the CNIB:

The Canadian National Institute for the Blind (CNIB) invites you to attend their third annual Dining in the Dark – a signature, volunteer-driven event in Atlantic Canada to raise funds for CNIB programs and services.
During this unique dining experience, you will have the opportunity to enjoy a meal while relying solely on your sense of touch, taste and smell. Throughout the evening, two inspiring individuals will share their own personal story about how CNIB has helped them see beyond vision loss.

Medical Humanism and Medical Humanities (Monday, 5pm, Scotiabank Theatre)—”A talk on redefinining the role of the humanities in medical culture by Andrea Carlino, Institute of the History of Medicine and Health, University of Geneva.”

Nuclear Science (Monday, 7:30pm, Museum of Natural History)—Rick Didsbury, the Manager of Research & Development at Canadian Nuclear Laboratories Limited, which used to be the Atomic Energy of Canada Limited, will talk about “The Future of Nuclear Science and Technology Research in Canada.”

Last week, I linked to a CBC article about a recent alarming — more than five inches in two years — rise in sea level along the northeast US and Canadian Maritime coasts. Greg Hanscom at Grist has lots more to say about it:

Now, this is one of those cases when we can’t say with any certainty that climate change did this!  We can only say that really smart people with really, really powerful computers predict that this is exactly the kind of thing that climate change is going to do, and that these events will get bigger and more frequent as the mercury rises.

But the fact that, with or without our help, Mother Nature can just throw down a quick 5-inch sea-level surge is plenty alarming, especially when you throw that on top of the already well-documented climate-driven rise, and toss in some extra storm surge for good measure. Think of what an extra 5 inches of seawater would have done to New York during Sandy or, god forbid, Miami during Hurricane Andrew.

We live in interesting times. 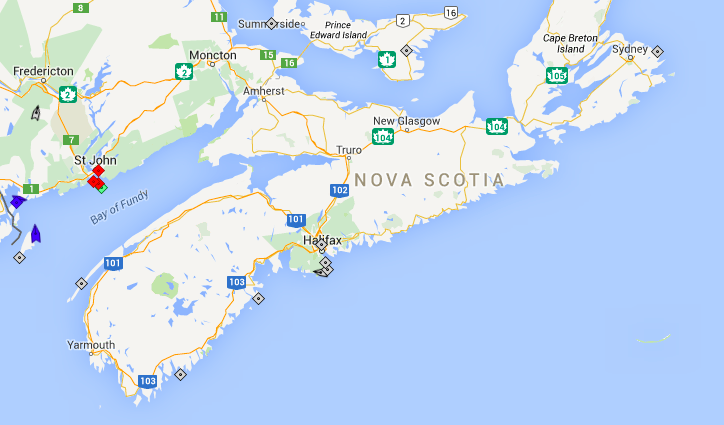 No activity on the harbour today.