It’s minus 17 with a wind chill of minus 27 this morning. But the folks at the Oval have announced closing day is March 20, because supposedly warm weather is coming. Long range weather forecasts aren’t reliable in Nova Scotia but, for what it’s worth, the Weather Networks says it’s going to be plenty cold enough to maintain the ice for the next two weeks: 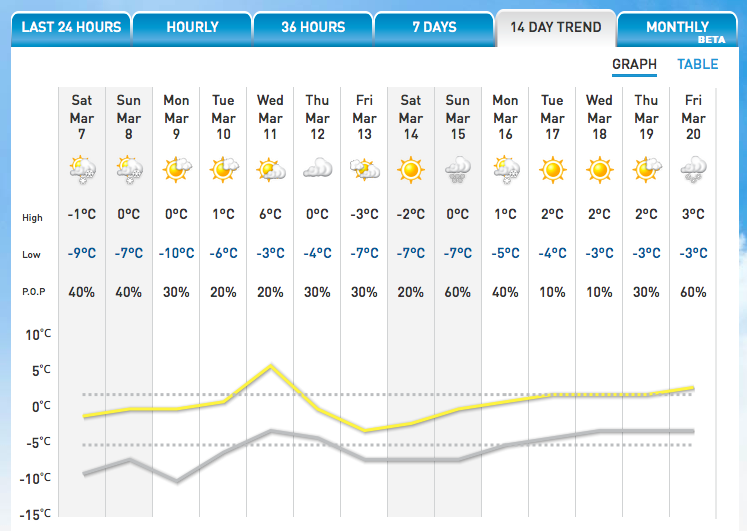 Yea, I know, I’m going on forever about the sidewalks, but I feel the need to point out that anyone can do a good job at snow and ice removal in nice weather — the sidewalks in Havana don’t have a speck of ice on them. But the entire point of snow and ice operations is to be prepared for bad weather. Blaming sky goddesses for lack of preparation doesn’t cut it.

The Cyberbullying Act, rushed through the legislature in the wake of Rehtaeh Parsons’ suicide, is overly broad and will is the subject of a Supreme Court challenge. In the meanwhile, its use has strayed a long way from teenagers sharing photos of each other. Rob Romard, a Cape Breton man, has been issued a warning by the province’s CyberScan unit that his Twitter and Facebook posts about his former employer, Cape Breton Hyundai, constitute cyberbullying:

Roger Merrick, director of public safety for the Justice Department, signed the Feb. 23 letter Romard received, saying his actions constituted cyberbullying and directing him to remove all communications about Cape Breton Hyundai and its owners from the Internet within 48 hours. The letter said if that didn’t happen, the province may get a court order to enforce the ruling.

Romard has not complied with the warning.

If the owners of Cape Breton Hyundai feel Romard has defamed him, they can hire a lawyer and file suit alleging violation of defamation and libel laws, and argue their position before a judge. Using the provincial Department of Justice to intervene in a private dispute is beyond the pale. The Cyberbullying Act is a step too far.

Daniel Wayne Surette, 27, and Kyle David James Fredericks, 25, admitted to dousing [Harley] Lawrence with $10 worth of gas and setting the homeless man on fire while he was still alive.

Fredericks is the same man who [Amy] Graves believes sold her brother Dilaudid in 2011. Joshua Graves died from an overdose the night he mixed those drugs with alcohol at a house party in Berwick.

Fredericks was later charged with criminal negligence causing death, but the judge decided there wasn’t enough evidence to warrant a criminal conviction and he was acquitted in February 2013.

The HMCS Fredericton, based in Halifax, is one of six ships taking part in NATO operations in the Black Sea. The Defence Department “says the exercises are directly related to Russia’s aggression towards Ukraine,” reports the Cape Breton Post.

During the Cold War, NATO mostly avoided the Black Sea.

About 15,000 cars sit encrusted in ice at the Autoport. CN, which operates the Autoport, blames the weather, but Kevin Piper, with the Halifax Longshoremen’s Association, says CN has long been slow at moving cars, even when the weather is fine. Such delays may cause car companies to find another port, reports the CBC.

Police releases to reporters aren’t always intelligible. It’s hard to say if this morning’s release from shift sergeant Ken Burton is saying that the driver took the car onto the sidewalk, or if he simply cut someone off in the crosswalk:

At approximately 7:10 pm on March 5, 2015 HRP responded to the intersection of Portland Pl and Gottingen Street in Halifax in relation to an assault. The victim reports that he was driving his car on Portland Pl and came to the stop sign at Gottingen St. He stopped then slowly made his way out and while across the sidewalk his car was smacked by a pedestrian that was mad that he was on the crosswalk. The driver allowed the pedestrian to cross and then when he went to pull away the pedestrian struck his car with a beer bottle. The driver stopped his car and attempted to call the police. The pedestrian opened the passenger door to the car and assaulted the driver while trying to prevent the driver from calling police. The driver sustained non-life threatening injuries but required medical attention.

Male (pedestrian) charged with Assault Causing Bodily Harm and Breach of Probation and held for court in the morning.

Violence is inexcusable, but this cold weather, the icy sidewalks, and the continued bad behaviour of drivers has sent some people over the breaking point, evidently. Or, maybe someone was making a movie.

Dustin Hoffman explained how it went down:

It was a low-budget movie. Nobody wanted to make this movie, Midnight Cowboy. People walked out during previews; it was considered filthy in 1969. Very low budget. Consequently, on Sixth Avenue, there was no money to stack it with extras.

So it’s what they call a stolen shot. We have radio mikes on, the van is across the street, we rehearse it by ourselves. You know, the director [John Schlesinger], me and [Jon] Voight.

And we would have to do this dialogue walking. And the hidden camera across the street would go with us, but we couldn’t stop the signal, so we had to reach the dialogue at a certain point so we wouldn’t have to stop. It would have to be turning green when we hit it.

So we rehearsed it ourselves and we finally got — oh, so we’ll start this far back, then we’ll do this pace and then we’ll get there when it just hits green — perfect — and we can just continue. And we do it, and the first take a cab jumps the light …

I wound up saying, ‘I’m walkin’ here!’ But what was going through my head is: ‘Hey, we’re makin’ a movie here! And you just fucked this shot up.’ But somehow something told me you’d better keep it within the character.

I am so sick of the term “expert,” the latest example being some “expert” from Ottawa, of all places, advising that Halifax should be keeping bike lanes open in the winter, especially this winter (March 4 story).

How do these people earn the title “expert” anyway? Every time one turns on the news, or no doubt many of the daytime TV shows — which I do not watch anyway (too many “experts”) — there is some “expert” sounding off about something or another.

Politics, climate, clearcutting — you name it, there is an expert telling the rest of us how to live, eat, travel, whatever. Too many experts, not enough common sense. Of course, there are an equal number of “experts” with opposing opinions. Balance! Is that what the media are aiming for?

While I am at it, I suppose some “expert” advised Halifax and other municipalities to make policies such as perfectly clear streets and sidewalks year-round when it is an impossibility in a country with snowy winters. These policies just set them up for lawsuits and, of course, another expert — a judge — will decide some claim has merit when a bit of common sense should prevail. But our laws do not permit that sort of nonsense. Good Lord, people. Get real.

The city has issued a tender for a head-hunting firm to find a new Director of Finance. Evidently, the current director, Greg Keefe, is finally moving on.

Keefe has somehow maintained a sense of humour and good will despite nearly 40 years of government service. In 2011, he retired as deputy minister to the Premier’s Office, only to find himself landing at City Hall to “temporarily” fill the position of finance director. The former finance director, Cathie O’Toole, had left for a lower profile position at Halifax Water after exposing the shenanigans that ultimately became the concert scandal.

This lecture was cancelled this morning, and is being replaced with the following:

After yesterday’s discussion of swatting, someone on the internet (sorry, I forget who) pointed me to Wednesday’s episode of the podcast Reply All, which discusses at length the issue.

The violent crime rate is plummeting — it’s about half what is was in the 1990s. And yet police are more militarized than ever. 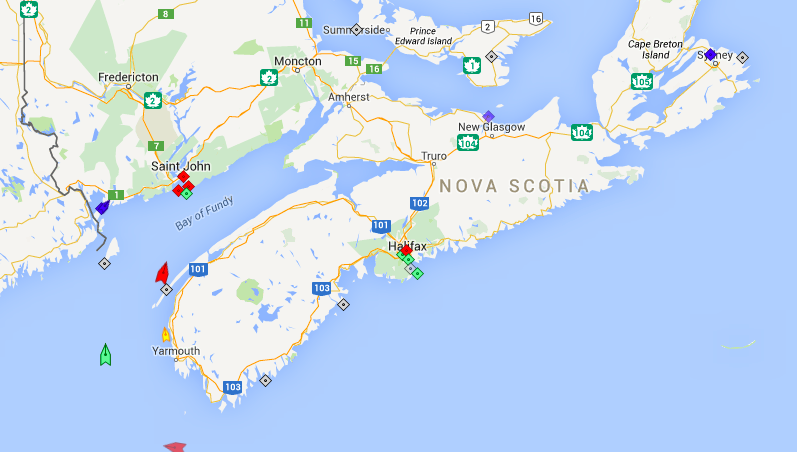 The seas off Nova Scotia, 8am Friday. Map: marinetraffic.com

I’ll post an article by Moira Donovan on the site this morning.