You are here: Home / Featured / If we do not amuse them we are going to lose them: Morning File, Thursday September 29, 2016

“When heaving waters in the North Atlantic wrenched a string of massive steel pipes from a drilling ship off Nova Scotia’s coast, one of the 20-tonne sections of the plummeting coil struck the seabed just 12 metres from the top of an undersea oil exploration well,” reports Michael Tutton for the Canadian Press:

The distance is one of several details in a Shell Canada accident report received through access to information legislation, prompting critics to say the entire incident was too close for comfort in an area near one of Atlantic Canada’s richest fishing grounds of the Scotian shelf.

A summary report by the regulator issued earlier this year had said a heavier portion of the drilling system fell 22 metres from the wellhead, but didn’t mention the closer distance of pipes that are coiled and criss-crossed through an area of seabed the size of three football fields in length and breadth.

2. The mean-spiritedness of Community Services

Last year, a woman receiving social assistance — there’s no need to name her, so I’ll just call her Ellen, a pseudonym — asked the Department of Community services for more than the maximum $535 monthly housing allowance. The department turned down her request, and so with the help of Dal Legal Aid, Ellen appealed to the Assistance Appeal Board.

Ellen has Multiple Chemical Sensitivity (MCS) and provided a letter signed by both an occupational therapist and a doctor documenting her illness. “Doctor Fox indicated that MCS affects the central nervous system by overloading the system of an individual with MCS,” noted Ian Gulliver, the appeal board member who heard the case. “When individuals with MCS encounter physical, emotional, mental, cognitive and environmental stress it results in an increase in sensitivity or reactivity of their central nervous system, which increases their reactivity to stress (i.e. chemical exposure or emotional stress) and increases the severity of the symptoms. In the appellant’s case while under stress re her housing and if placed in an environment where chemical exposure is present or is likely the stress will significantly affect her health.” The bold is in the original document, and sure, that’s a convoluted sentence, but no one has contested Ellen’s medical diagnosis.

On her own, Ellen found an apartment that was MCS-friendly. Monthly rent is $850, and she paid a $425 deposit on it. In order to meet her health needs, she was asking for an increase above the normal $535 limit paid by Community Services.

A student Legal Aid worker, Ashley MacDonald, who assisted Ellen in her appeal, filed a Freedom of Information request with Community Services asking for the number of instances in which the department paid more than the $535 housing allowance permitted in the Employment Support and Income Assistance regulations. Lynn Hartwell, the deputy minister at Community Services, sent the following letter as response: 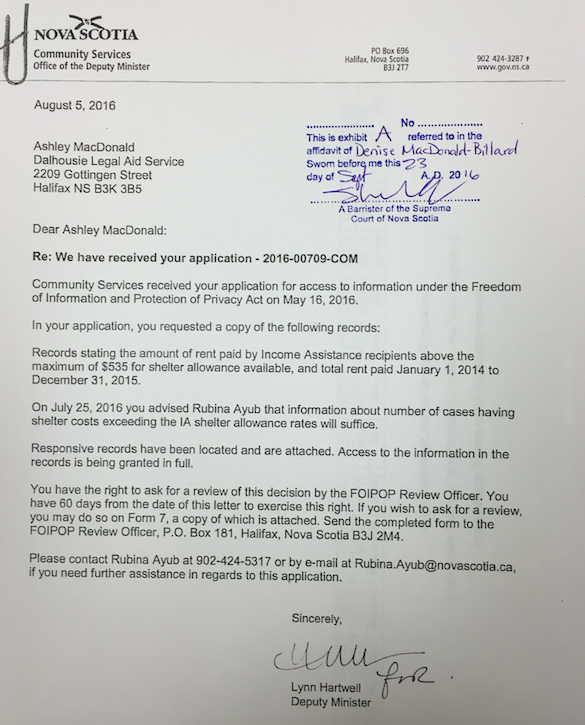 That letter and chart were submitted by another student Legal Aid worker, Christina Macdonald, to the Assistance Appeal Board, along with the letter from Dr. Fox. Gulliver, on the appeal board, acknowledged receipt of the housing stats in the “statement of facts” in his ruling, but did not cite them in the “decision” part of the ruling. In part, his decision reads:

But now Community Services is asking the Supreme Court to set aside Gulliver’s ruling. The reason — the housing stats submitted by Legal Aid to the board were “misinterpreted.” In an affidavit submitted to the court, Denise MacDonald-Billard, Community Services’ director of income assistance, writes that:

Still, Community Services is now saying that because the housing stats were misinterpreted, Ellen should be denied the increase in her housing allowance.

Think about this. A Legal Aid worker asked for documentation showing how many people on assistance receive a housing allowance greater than $535 and received a document showing that more than 11,000 do. The department now says that in reality that’s the number of people who are living in places where rent is more than $535, but the vast majority of those are only receiving $535 in assistance. The real number, the department says, is closer to 100. So therefore Ellen shouldn’t get more than $535.

Ellen still has MCS, and still has rent of $850. But gosh darn it, Community Services is making a point.

I can’t help but wonder how many thousands of dollars in legal costs Community Services is incurring to deny this one woman a $315 increase in her housing allowance so she doesn’t get sick.

“The Carleton Music Bar and Grill filed for bankruptcy protection at the end of August, after two back-to-back weekends of poor turnout,” reports Stephanie vanKampen for the CBC:

Owner Mike Campbell blames downtown construction, the MacDonald Bridge closures, and a shrinking appetite for live music for the downturn in business. The bar opened in 2008.

“I’d say we’ve lost $100,000 a year over the last three to four years,” said Campbell, noting the construction of the Nova Centre across the street began about three years ago, in 2013.

A couple of weekends ago, a Saturday at 5pm, I sat on the Shoe’s patio, utterly alone, watching the garbage blow down the street. Even the tourists are avoiding Argyle Street. 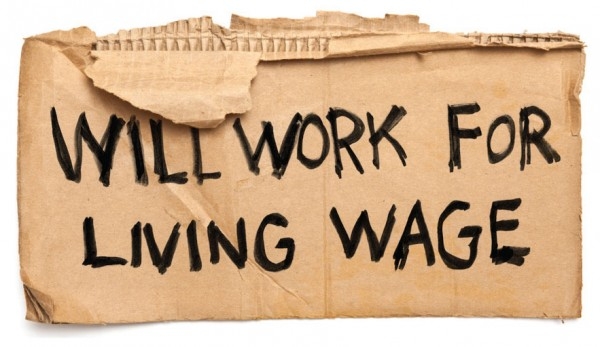 Council candidates continue to respond, and I continue to update the page with their answers.

On Tuesday there were four bomb threats around the province, reported Jennifer Hoegg for Transcontinental:

All reports came in around 4:30 p.m. Sept. 27 in the communities of Westville, Bible Hill, Kentville and Bridgewater. All four initially involved municipal police forces and all four proved to be hoaxes.

Everybody is worked up about the bomb threats, I guess, so the Suspicious Packages played a surprise gig at the Central Library late yesterday afternoon. “Halifax Regional Police cleared the scene at the library shortly after 1 am,” say the police in an email to reporters. “The located package was deemed safe by the Explosive Disposal Unit and will be further examined in the coming days.” All this led to the cancellation of the Right to Know talk by Freedom of Information Commissioner Catherine Tully. The talk will be rescheduled. 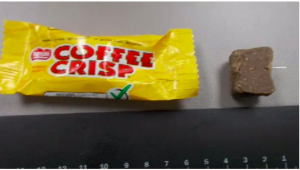 The cops never have gotten back to me with any positive results of their supposed investigations, so I’m just going to assume that each and every report of tampered Halloween candy last year was utter bullshit. If you’re a new reader, there’s background here.

The gist of it is that in coming weeks a bunch of kids will stick needles in their Halloween candy as a stupid joke (kids are dumb!) and then some clueless adults will overreact and call the cops and the media will splash it all over the front pages and Amy Smith will look concerned and everyone will talk about how society is going to hell and how kids can’t even go trick-or-treating anymore unlike in the good old days and we’ll look fondly at Norman Rockwell drawings but we’ll forget about how in decades past open racism and gay-bashing were acceptable and the beer sucked and there were only three channels and you had to change your own oil and you just tossed the old oil on the ground and then we’ll hold our children dearly because you never know that couple next door might be putting poison in the Hershey bars — it was on CBC! — but the kids will squirm out of our unwelcome hugs and instead play with their smart phones.

I believe not enough is being done to entertain our cruise ship visitors.

If we do not amuse them we are going to lose them.

Louisbourg lost cruise ships because of this.

Investment policy committee (noon, City Hall) — I often chuckle at the reading list. For today’s meeting, committee members were supposed to bone up on the economics of oil, as if anyone on the planet understands that.

All meetings are being conducted via private email accounts.

Richard K. Guy (2:30pm, Colloquium Room #319, Chase Building) — It’s mathematician Richard K. Guy’s 100th birthday. Anyone who lives that long should be celebrated simply for the accomplishment, but this, er, guy has actually done stuff in his century.

Guy co-authored his most famous book, Winning Ways for your Mathematical Plays, when he was a mere lad of 66 years. “This book has laid the foundation to a mathematical approach to playing games,” says Amazon. “The wise authors wield witty words, which wangle wonderfully winning ways.“

Guy is also the big brain behind The Strong Law of Small Numbers, which some (other) guy on the internet explains:

The first strong law of small numbers (Gardner 1980, Guy 1988, 1990) states “There aren’t enough small numbers to meet the many demands made of them.”

The second strong law of small numbers (Guy 1990) states that “When two numbers look equal, it ain’t necessarily so.” Guy (1988) gives 35 examples of this statement, and 40 more in Guy (1990). For example, example 35 notes that the first few values of the interpolating polynomial

points around a circle by chords (circle division by chords).

Similarly, example 41 notes the curious fact that the function

Another example is provided by a near-identity of trinomial coefficients noticed by Euler.

And if that’s not a knee-slapper, I don’t know what is. Mathematical humour is the best (hi Ken!).

To celebrate Guy’s 100th birthday, Karl Dilcher and Richard Nowakowski will explain that old mathematicians never die, they just lose some of their functions.

Blood cleansing (6pm, Room 127, Goldberg Computer Science Building) — Zoran Obradovic, who somehow manages to be simultaneously “an Academician at the Academia Europaea (the Academy of Europe) and a Foreign Academician at the Serbian Academy of Sciences and Arts, a L.H. Carnell Professor of Data Analytics at Temple University, Professor in the Department of Computer and Information Sciences with a secondary appointment in Department of Statistical Science, and Director of the Center for Data Analytics and Biomedical Informatics,” will speak on “Computational methods for early diagnostics and multiple blood cleansing interventions in sepsis.” 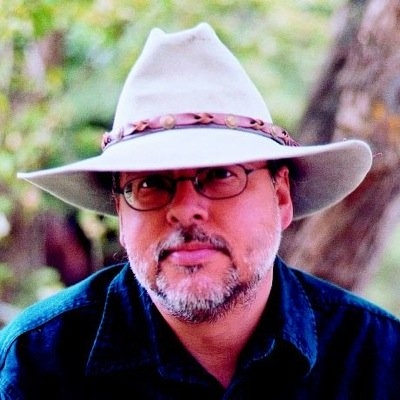 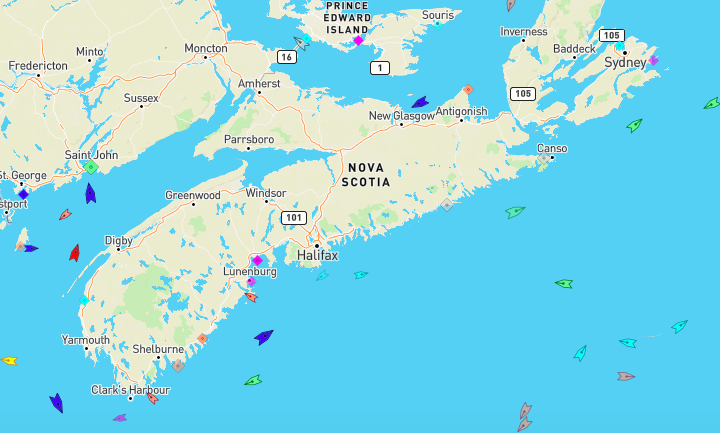 The seas around Nova Scotia, 9:30am. Map: marinetraffic.com

I’ve been sitting on something too long and need to get it out this morning. Check back on the home page in a couple of hours.