You are here: Home / Featured / If everyone goes further into debt, we’ll all be rich!

“Emily Hill, senior counsel for the Mass Casualty Commission, confirmed to reporters at a briefing [Friday] the commission is considering a request from one of the lawyers representing the families of victims to change a rule that governs who can question witnesses,” reports Jennifer Henderson:

Commission hearings in Truro last week saw protests and boycotts by two legal firms representing 15 families of the murder victims. They were reacting to the commissioners’ decision to permit two senior RCMP officers who supervised operations on April 18, 2020 –Staff-Sergeants Brian Rehill and Andy O’Brien — to avoid direct cross-examination by lawyers for some of the families.

Commissioners now have to make a ruling on the request. Lawyers for the families they represent will be back at the public hearings when the proceedings resume Monday. MCC lawyer Emily Hill said the commission has received no other requests from future witnesses for special accommodations.

I’m on my way to Truro this morning, where I will be live-tweeting the testimony of Truro Police Chief Dave MacNeil. 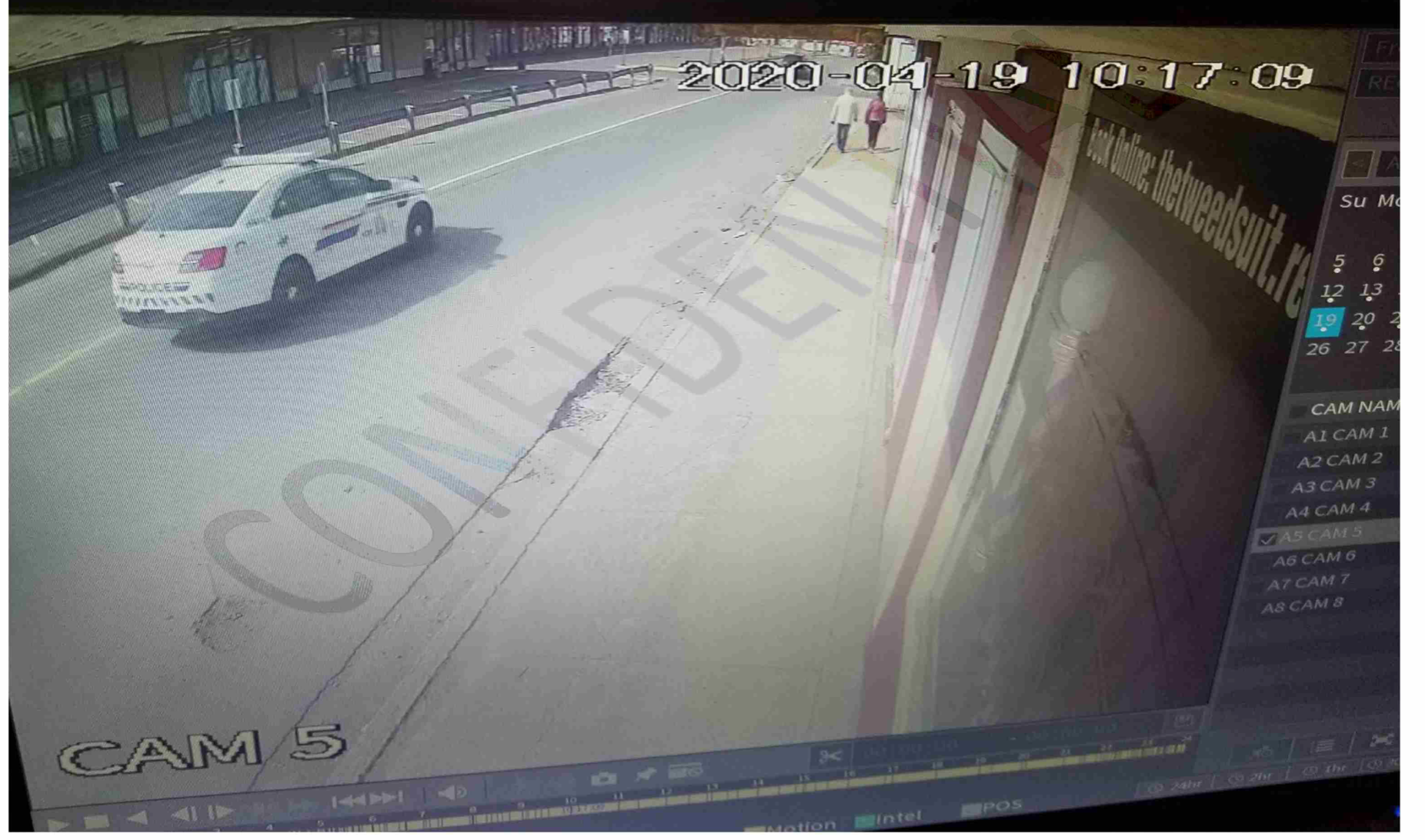 The killer drove his fake police car past two pedestrians on Esplanade Street in Truro. Photo from Jimolly’s Bakery video

Also this morning, we’ll publish my report on how the mass murderer was able to drive through the centre of Truro without being confronted by police. That should be out soon after 9:30am.

Covering the inquiry is necessary reporting. Of course it’s primarily important because 22 people were killed, and that raises important issues of how we function as a society, the role of violence and weapons in our lives, and police accountability.

But I think I’d lose myself if I stayed entirely within those lines. There’s an underlying current in all these stories that intrigues me — how people perceive the world and use those perceptions to make decisions, how they interact with and value each other, what moves and motivates people. In other words, the weird and confusing and ultimately unknowable but also lovely basic humanity that is the heart of any story about people in the world.

That’s what I tell myself, anyway. In reality, it’s impossible not to get angry about one evil man causing so much heartache and pain, and even now, two years after those terrible deeds, costing us millions of dollars, lost sleep, and undue attention. It’s depressing.

We all have better things to do. But here we are, doing what’s necessary.

Anyway, I hope you value this reporting. And if you do, I’d ask that you help support it financially with your subscription; we could use the money. Thanks! 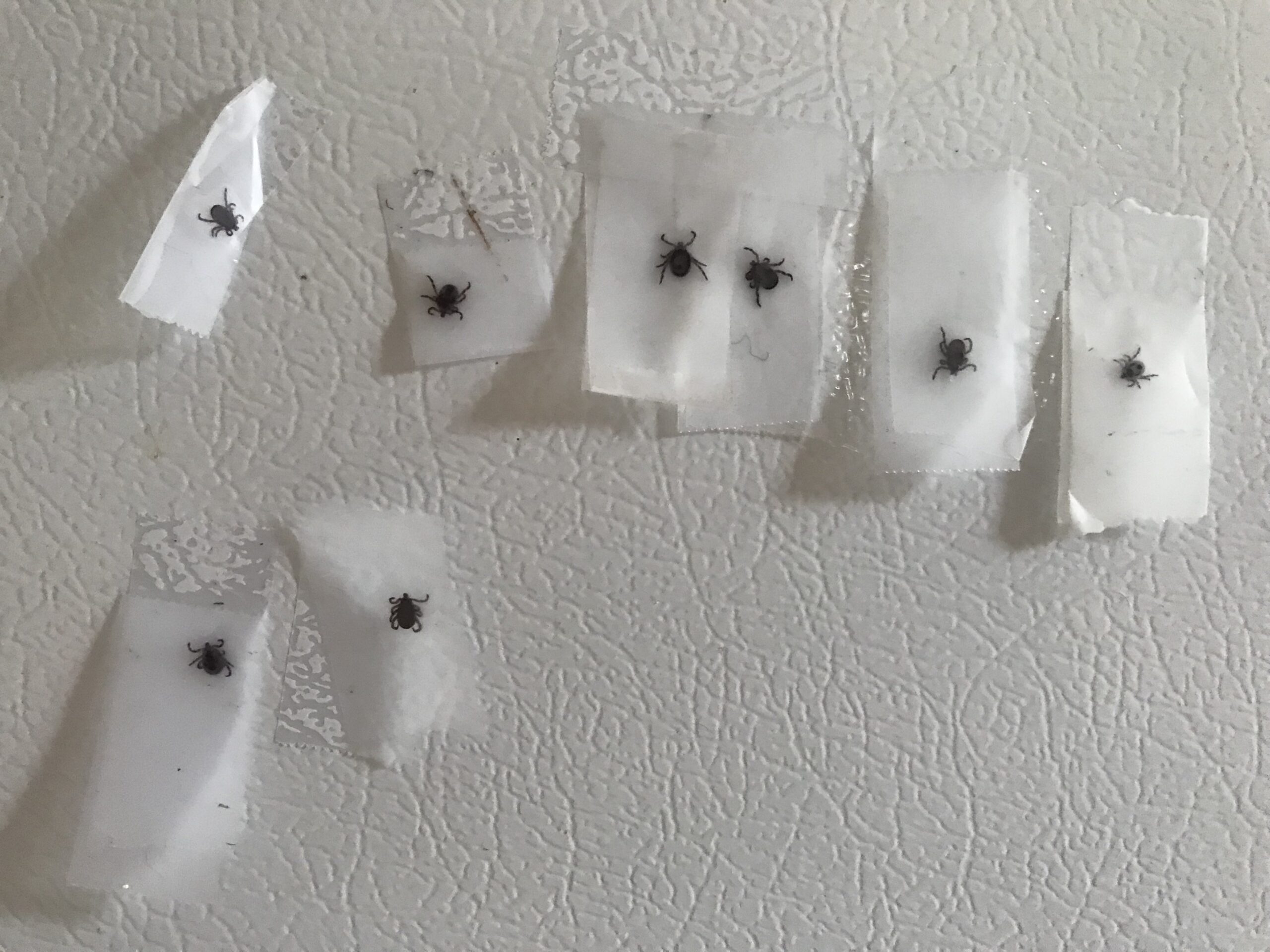 Our “trophy tick collection” of seven ticks found inside our house in just one week in May 2022. Photo: Joan Baxter

“Ticks and tick bites are so prolific in much of Nova Scotia these days that it’s common to read social media posts from people saying they are filling whole jars with ticks they remove from themselves,” reports Joan Baxter:

In other words, Nova Scotia has a big tick problem. And that means it has a big Lyme disease problem. In fact, the province has by far the highest per capita incidence of Lyme disease in the country.

Donna Lugar, founder of the Nova Scotia Lyme Support Group, told the Examiner that Steve Craig delivered the province’s proclamation that May was Lyme Disease Awareness Month. That evening, both Province House and City Hall were lit in lime green to mark the occasion.

But, Lugar said, that was about all there was.

“There wasn’t even a press release,” Lugar told the Halifax Examiner.

Before the last provincial election in August 2021, the Nova Scotia Lyme Advocacy / Activist Group wrote to political parties to ask what they would do to address Lyme disease in the province.

The Progressive Conservative (PC) Party replied that in 2019, while opposition leader, Tim Houston had introduced the Lyme Disease Strategy Act, and pledged that should they win the election, they would implement it in their first year.

“Lyme disease is an issue that is personally important to Tim Houston and he remains committed to fighting against Lyme disease,” said the letter, signed by Tara Miller, campaign co-chair of the PC Party of Nova Scotia.

So far, the Lyme Disease Strategy Act has not been implemented, Lugar said.

Click here to read “The clock is ticking, but Nova Scotia is still not acting on ticks and Lyme disease.”

“Tourism is looking more and more like a basket we shouldn’t put all our eggs in—first we lose two seasons to a global pandemic, now we’re poised to lose visitors due to the high price of gas,” writes Mary Campbell:

Port of Sydney CEO Marlene Usher clearly sees the writing on the wall, she’s turning the port into a mini-mall focused on attracting locals. As she told the CBC:

We’ve been labelled as a cruise pavilion. We want to be more than that.

To be fair, “cruise pavilion” is literally written over their main entrance: 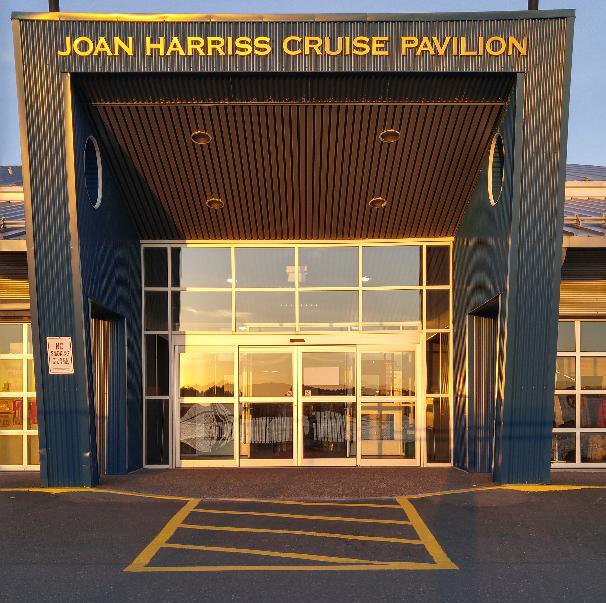 I’m not sure retail is any safer than cruise at this point, given inflation rates. People are struggling to afford necessities, let alone the sort of extras sold by the shops in the Joan Harriss (Not A) Cruise Pavilion.

As for economic development efforts, they have a terrible track record we seem to have collectively agreed to ignore. (Mind you, I understand why: economic development is one of the few things the province is still willing to throw money at, staunch in the belief that, given enough public cash, the private sector will lead us to the promised land of general economic prosperity.)

Boil everything that was said during both council presentations down to its essence and you’ll find that the answer to our woes seems to be for us to buy more stuff.

The solution, of course, is to have people go further into debt so they can spend money they don’t have to prop up the economy, then give giant companies that collateralize that debt giant wage subsidies to open back end offices in Nova Scotia so the rich people who buy the collateralized debt can park the profits in offshore tax havens and the underpaid employees at the financial institutions have enough of a paper future revenue profile, even though they’ll get laid off when the wage subsidies are bettered by some even-more-desperate jurisdiction, such that they too can take on more debt and spend more money they don’t have to prop up the economy, and then we can feel good about yelling at young people for either not being frugal because they’re doing things like paying rent or not spending enough to help the economy, depending, but either way we’ll all be rich because the economic development people are so smart. Let’s give them more money.

The investigation is ongoing. Further information may be provided as it becomes available.

“A ship with no captain or crew on board has docked in the Halifax harbour to undergo tests and repairs after being diverted from its transatlantic voyage,” reports Simon Smith for the CBC:

The Mayflower Autonomous Ship left from Plymouth, U.K., and was originally slated to arrive in Massachusetts, but was rerouted to Halifax due to computer and electrical issues about 1,600 kilometres west of the Azores.

“We had a decision to make where we were having sort of a series of intermittent, low-level failures,” said Brett Phaneuf, the managing director of the Mayflower Autonomous Ship project.

“We ended up here in Halifax because it was the closest port of refuge when we started to experience problems.”

Here’s a pic of the Mayflower: 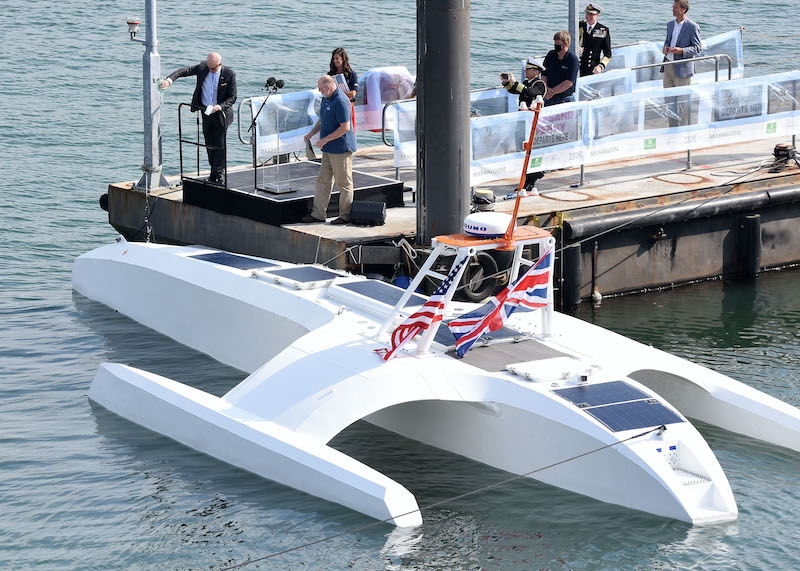 The US Ambassador naming the Mayflower 2 as the worlds first autonomous ship. Photo: Wayne Perry

Probably self-driving ships will become a reality several centuries before self-driving cars become a reality, as ships generally won’t run over playing toddlers or burn their passengers to a crisp in lithium fires, and if they crash into each other and dump their cargoes into the already plastic- and trash-ridden oceans, who really cares?

But, er, ship? I mean, I personally have sailed larger boats than that little tub.

Community Services (Tuesday, 10am, One Government Place) — Early Childhood Intervention to Provide Support for Families Who Have Children with Disabilities, with representatives from the Department of Community Services, and East Preston Family Resource Centre

PhD Defence, Law (Tuesday, 1pm) — via video, Ogbu Okanga will defend “Disabusing the ‘charity’ narrative: What inter-national tax equity really means for ‘poor’ countries and how to reframe it”

I wonder how Paul Simon’s painting career is going.