You are here: Home / Featured / I Went To Sydney Harbour Ports Day So You Didn’t Have To 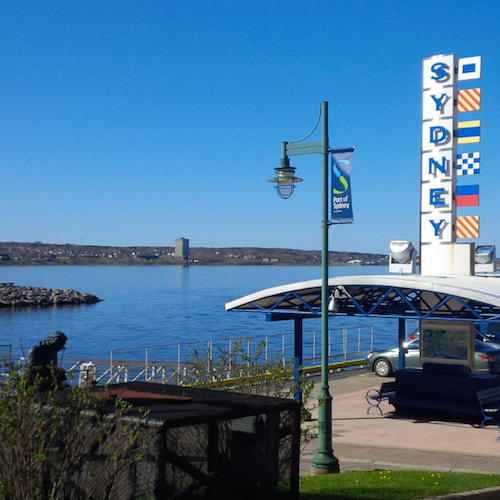 Sydney Harbour Ports Day 2016 was held in a large, windowless auditorium in the Joan Harriss Cruise Pavilion on Thursday, May 19. In nautical terms, it was the equivalent of travelling steerage.

This year’s theme was “Thinking Big: A New Home on the East Coast for Ultra Large Container Vessels,” which I guess marks the official end of the “Offshore Oil and Gas” era (if something can end without ever actually having started).

The idea of building a state-of-the-art container terminal, capable of handling the biggest of the new container ships (which have been growing steadily since the plan was hatched — the new Triple-E-Class ships will carry some 18,000 containers) has been around for over a decade. The harbour was dredged with this goal in mind, and the material from the dredge helped form what is now known as “the greenfield site,” a blank slate next to the Sydport Industrial Park in Point Edward (across the harbour from Sydney proper) onto which promoters of various stripes and abilities have been projecting their dreams.

The most recent of these dreamers — Barry Sheehy and Albert Barbusci — are blank slates themselves, in that neither has any experience marketing ports (online Mahjong, yes; high-end Chinese cemeteries, yes; ports — not so much).

But they’re not letting that stop them, so why should the Cape Breton Regional Municipality? Mayor Cecil Clarke worked with Sheehy and Barbusci — or Harbour Port Development Partners (HPDP), as they are now known — secretly for about 16 months prior to May 2015 when they became our official, exclusive, port marketers. They are apparently working pro bono, paying their own travel and legal and consulting costs.

What’s in it for HPDP? We’re not exactly sure — like pretty much everyone who has ever met with the CBRM Mayor, they have a non-disclosure agreement — but according to the contract they signed with the CBRM (pages 9-15) doesn’t provide much clarity:

(a) CBRM acknowledges that HPDP has invested considerable time and expense in relation to the promotion of the Project and shall continue to do so through the duration of this Agreement. (b) All funds to be paid hereunder shall be paid in Canadian dollars to be disbursed on closing via wire transfer.

The Journey and the Dream

It was a passionate 30 minutes, filled with exhortations to support the “team” in its efforts to promote the port and dire warnings of coming “sacrifices.” (Was it just me, or was he looking at the International Longshoremen’s table as he said that?)

Mostly, though, it was a list of things HPDP has done or must do to develop the port. It started, reasonably enough I guess, with “secure financing.” Sheehy assured us financing has been secured (offering no further details).

From there, things got a little wonky: secure marine services, secure sister city relationships, secure engineering and construction firms, all precede “secure a shipping line.” Sheehy claims they are talking to shippers and shippers are asking about things like marine services, but I find it hard to believe that when he says, “We have a tugboat. We have a ship repair shop employing 15 people,” a company like Maersk replies, “Excellent. That’s all we were waiting for.”

Among the items still to be checked off HPDP’s list is “secure rail service.” Genesee & Wyoming, the company that operates the Cape Breton and Central Nova Line between Sydney and Truro, has had the right to apply to abandon the line since April 2016. Last year, HPDP announced it had a memorandum of understanding with the rail operator that could see the line continue to operate for another year — possibly two — beyond April.

But at Port Day on Thursday, there was no mention of Genesee & Wyoming. In fact, all references to the rail operator have been scrubbed from the HPDP website. Instead, on the subject of rail, Sheehy said grandly, “When rail is needed, it will be there.”

(Which I find to be a remarkably sanguine response from a man who felt he couldn’t approach shipping companies without having a tugboat operator and a Chinese sister city nailed down.)

The final speech of the day (I’m going to spare you the Foreign Trade Zone talk, the panel discussion on Sydney harbour as a “haven for business,” and the Order of the CB Sou’Wester interlude, which looked like a cross between a Captain Highliner commercial and a Game of Thrones out-take) was the keynote. It was delivered by James C. (J.C.) Evans, a consultant with the distinction of being the only Port Day speaker with actual port experience.

Evans — who met Marlene Usher, CEO of the Port of Sydney, at a conference, liked the sound of the port project and came Thursday simply to share his personal opinion — believes rail, more specifically, CN rail, will be the key to the new mega-port.

If there’s such a thing as a CN fanboy, Evans is it, which is probably why no one had the heart to tell him CN doesn’t run the Truro-Sydney line. I guess when rail is necessary, it will not only be there, it will be CN.

Evans’ reasons for focusing on rail are quite simple: on the one hand, he worked at the Los Angeles/Long Beach port with a state-of-the-art, on-dock rail system that could handle the insane amount of cargo that comes off an Ultra-large container ship.

On the other hand, he says that even if Eastern U.S. ports manage to raise their bridges and dredge their harbours enough to accommodate the monster ships on the horizon, their congestion problems won’t improve. In fact, they’ll get worse as ever more containers pile up awaiting trans-shipment inland by train or truck. No one, he says, is building railways in North America and the only rail line with underused capacity is CN’s Halifax-Montreal-American heartland route (and you thought that was a bad thing).

Evans thinks the problems of East Coast ports are both insoluble (opening the door to the Sydney project) and about to be solved (meaning that if we don’t start work in six months, we’ll have lost our window of opportunity.) I do not understand how both of these things can be true, but the answer seems to have something to do with “Wilmington, Delaware” or “the Caribbean” (both of which should said with a slight sneer).

Rather than worrying about marine services and sister cities and FTZ designations, Evans basically said, “If you build an East Coast mega-hub, shippers will fight over it.”

But then again, what if they don’t?

Automation is another contentious issue. The Sydney port is either “highly automated” or “semi-automated” depending, I suspect, on how many ILA executives are in the audience (there was a full table of them at Port Day).

Even a semi-automated port, trans-shipping by rail rather than vessel would hardly appeal to the ILA. The question is, how badly do the developers need the support of the union to proceed?

ILA Local 1259 President Peter Gillis said, “We’re 1,000 per cent behind this project, but there are procedures that must be followed.”

Quad C and the Melford Terminal

There’s another side to the automation question too, one raised by Richie Mann, president of marketing for a competing port project, the Melford Terminal at the Strait of Canso.

In January 2016, Mann told CBC Cape Breton’s Information Morning that the amount of container traffic necessary to justify the cost of a fully automated terminal is beyond anything that could be expected in Nova Scotia.

He also revealed that the Chinese Communications Construction Company (CCCC or Quad C), currently conducting a feasibility study for HPDP, had approached the Melford group a few years earlier:

There was also, I don’t know if I’d call it an insistence but certainly a suggestion that a lot of Chinese labour had to be used in the movement of that equipment to Melford and in the installation of the equipment…

Mann also said they considered European automation technologies “more advanced and efficient” than those employed by the Chinese. In the end, these factors, along with CCCC’s having been debarred from World Bank road and bridge projects until 2017 for “fraudulent practices,” caused the Melford group to turn the Chinese firm down.

The caption underneath (besides identifying former Canadian Prime Minister Jean Chrétien as an “international advisor” to HPDP) says it was taken at an April meeting in Beijing:

The meeting formalized CCCC’s role in preparing the technical feasibility study for NOVAPORTE (the name of Sydney’s new container terminal). CCCC through its subsidiary will also supply state of the art cranes and other related equipment for the project. It is expected that CCCC will be an equity partner and play an important role in both the engineering and construction of the new port.

Is it just me, or does that sound a lot like the deal Melford turned down?

Something Great for Canada

In the end, believing the Sydney mega-port is a possibility rather than a pipe-dream comes down to  trusting the people in charge and they make that really damn hard to do. Take Jonathan Wener, the guy responsible for developing the port’s 2,000-acre logistics park, the “Novazone” (I’ve said before it sounds like a nasal spray and I stand by that assertion.)

His firm, Canderel, is a Montreal-based real estate developer specializing in office towers. (Why it was selected to design a logistics park is a good question, presumably Wener is part of the much-vaunted Sheehy/Barbusci “network.”)

Oh, and Canderel commissioned an architectural firm specializing in logistics park to produce a video. It’s like the trailer for a summer blockbuster about a container port — all that’s missing is the “In a world…” voice over!

Of their approach to Novazone, Wener said:

The abundance of inexpensive land is what will help us attract those logistics operations. Savannah practically gave away the land to the major users and we are prepared to do that, to get them here…

That makes sense if you end up with a tenanted logistics park — but what if you just end up giving land away? It’s not as if that’s never happened before in Cape Breton.

Wener, who’s been involved with the project for about 10 minutes (oh, alright, about a year), says it’s not just about profit for him, it’s about doing something “great for Canada,” and helping Nova Scotians achieve “the prosperity they deserve.” HPDP says for them, it’s about “nothing short of making transportation history.”

All of which is a little too rich for my blood.

At the end of Port Day, Usher said something to the effect that it was nice to be able to “update the community” on port developments, to which I have to say—the roughly 200 people who paid $250 to attend Port Day do not constitute “the community.”

And speaking as someone who listened (closely) to five and a half hours of presentations and discussions, I do not feel updated.

Couldn’t we have an actual public meeting during which the actual public will be provided with actual information on port development — or have I spent too long in steerage?

Correction: This article has been updated to correct a reference to HPDP’s remuneration which stated they would receive a lump-sum payment, a lease payment and a royalty — that is the CBRM’s “financial return” on the deal, according to the draft contract.