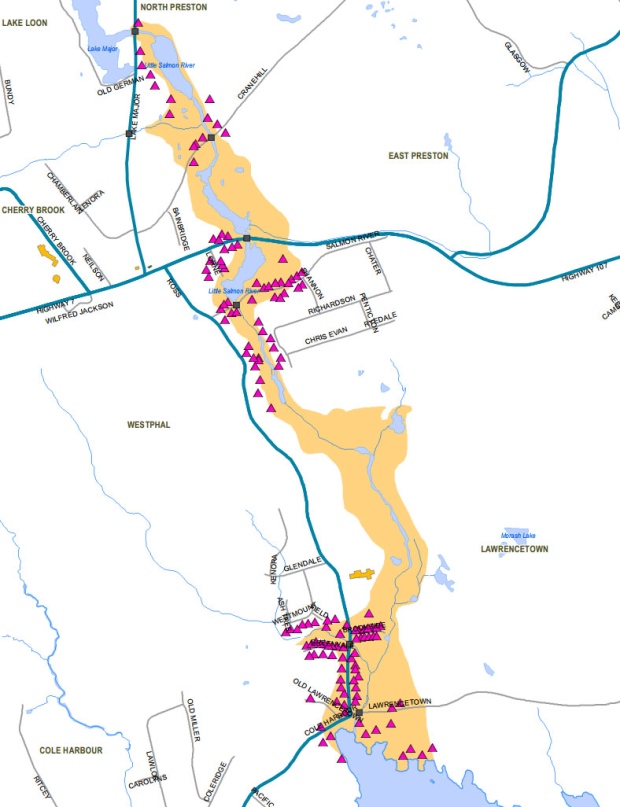 The evacuation zone stretches from North Preston to Cole Harbour, along both sides of the Salmon River.

Friday, Jan. 16, 2015 (Halifax, NS) – The Halifax Regional Municipality, in coordination with Halifax Water and emergency management agencies, has declared a mandatory evacuation of approximately 135 homes near Little Salmon River, downstream of Lake Major dam, on Saturday, Jan. 17, due to work happening on the dam.

Residents are advised that there is no immediate risk to the public. This is a precautionary measure in the event that there is a breach to the dam during the work.

Halifax District RCMP officers and ground search-and-rescue volunteers are going door-to-door this evening advising the affected residents that they are required to be out of their homes no later than 8 a.m. Saturday. If residents do not have alternate accommodations, they are asked to phone the Citizen Contact Centre at 311.

Evacuation warming centres will be open for displaced residents starting at 8 a.m. Saturday at the following two locations:

Halifax Water crews discovered an issue with the fish ladder adjoining the Lake Major dam during a recent routine inspection. The dam is structurally sound; however, repairs to the fish ladder need to move ahead right away.

The maintenance work is scheduled to take place starting at 9 a.m. until approximately 5 p.m. Saturday, Jan. 17.

Four of the six bridges in the area of the dam will be closed to traffic while this work is going on. Those include the bridges on Lake Major Road, Salmon River Drive, Crane Hill Road and Ross Road. The bridges on Highway 107 and Highway 207 will remain open throughout the day, barring any issues during the maintenance.

The evacuation area stretches from North Preston downstream all the way to Cole Harbour.

A (remotely) possible dam break? Evacuation of hundreds of people? This is the CBC’s raison d’être. They’ll be liveblogging the entire thing from every possible angle.

Yesterday was the first reported pedestrian incident at the new roundabout:

At 1:20 p.m., police responded to a vehicle/pedestrian collision at the intersection of Agricola and Cunard Streets. A 61-year-old woman was crossing Agricola Street in a marked crosswalk at the exit of the roundabout. A car exiting the roundabout was stopped to allow the pedestrian to cross safely when it was rear-ended by a cargo van. The impact moved the car forward and hit the pedestrian. The pedestrian suffered non-life threatening injuries and was transported to hospital by EHS.

A 35-year-old man driving the cargo van was issued a summary offence ticket under section 117(1) of the Motor Vehicle Act for following too closely. This ticket carries a fine of $233.95 and two points on a driver’s license upon conviction.

The federal government says it has reached a final contract with Irving Shipyard. “The government had originally planned to build six to eight ships but announced Friday that number is down to five or six,” reports Paul McLeod. Construction is set to begin in September. 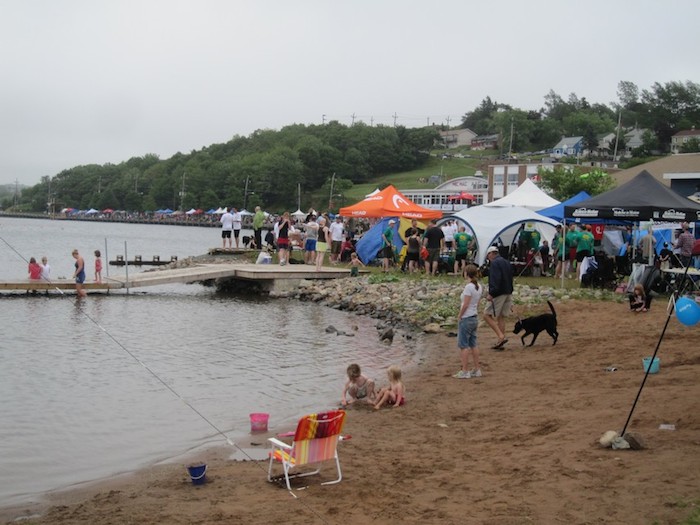 One of the children playing on Lake Banook could get pulled under by the weeds and die, says councillor Darren Fisher. Photo: David Murray, via http://epterranova.blogspot.ca

The city’s Environment and Sustainability committee is dealing with the weed issue in Dartmouth lakes. This article is behind the Examiner’s pay wall and so available only to paid subscribers. To purchase a subscription, click here.

Kate Watson links to this post from Daniel Towsey, written last September. I hadn’t been aware of Towsey’s site. He calls himself a “Canadian Truther,” and posts stuff about 911, Chemtrails, “Indigo Cosmic Spiritual Beings,” and so forth, and the site has a very 1995-alien abduction conspiracy site design vibe to it. (Easy on those fonts, Daniel, you’ll poke someone’s eye out.) But that aside, Towsey, who uses a wheelchair, posts the above video demonstrating the problems he has navigating outside the Woodside Ferry Terminal.

Towsey also very much dislikes the newest ferry, the Christopher Stannix, and posts photos showing how the seats are too close together, there isn’t room for baby carriages or bicycles, and the doors are too narrow for motorized chairs. 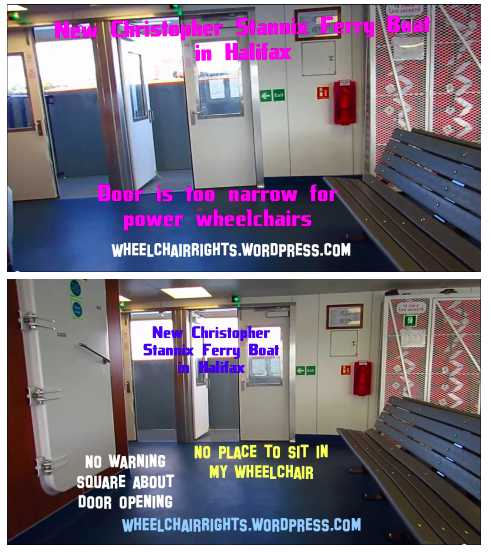 To the Truro Daily News, in response to deputy mayor Raymond Tynes’ complaint about a toy monkey mocking black people being sold at a local store:

Recently a prominent Truro citizen was upset about a few words on a monkey doll.

This attitude prompted me to reflect on the different thinking of people whose glass is either half full or half empty. According to fairly recent scientific knowledge, monkeys and apes are our ancestors and personally I’m very proud of my ancestors of how they persevered through hardships from the beginning to present and, by the way, have you ever heard the phrase used when someone does something naughty but nice, “you little monkey,” which is always a term of endearment.

In my opinion, the average Nova Scotian is better off than the kings and queens of old. We have better housing, central heating, better transportation, automobiles, healthier and more varieties of food and more overall choices in our life, etc., etc. So where could you find the time and energy to worry about what’s written on a doll? Knowledgeable, positive people are overjoyed that they were born in this time and place and the opportunities available to them. I personally thank Mother Nature that my glass is more than three quarters full. 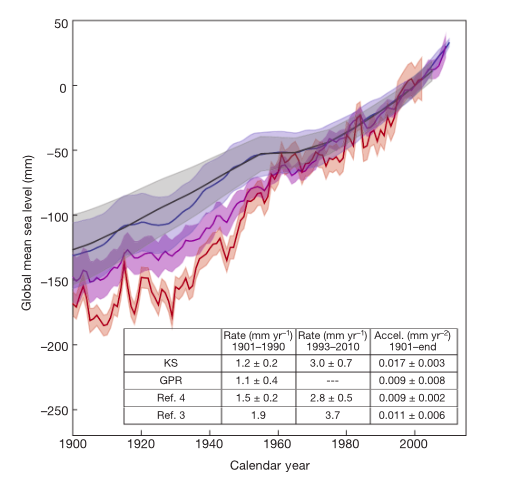 A graph showing various estimates of sea level rise in the 20th and 21st centuries. Explanation at the link.

The first is “Probabilistic reanalysis of twentieth-century sea-level rise,” written by Carling Hay and Eric Morrow of Harvard, and published in Nature. The abstract is dense and clearly written for other scientists:

Estimating and accounting for twentieth-century global mean sea-level (GMSL) rise is critical to characterizing current and futurehuman-induced sea-level change. Several previous analyses of tide gauge records—employing different methods to accommodate the spatial sparsity and temporal incompleteness of the data and to constrain the geometry of long-term sea-level change—have concluded that GMSL rose over the twentieth century at a mean rate of 1.6 to1.9 millimetres per year. Efforts to account for this rate by summing estimates of individual contributions from glacier and ice-sheet mass loss, ocean thermal expansion, and changes in land water storage fall significantly short in the period before 1990. The failure to close the budget of GMSL during this period has led to suggestions that several contributions may have been systematically underestimated. However, the extent to which the limitations of tide gauge analyses have affected estimates of the GMSL rate of change is unclear. Here we revisit estimates of twentieth-century GMSL rise using probabilistic techniques and find a rate of GMSL rise from 1901 to 1990 of 1.2 ± 0.2 millimetres per year (90% confidence interval). Based on individual contributions tabulated in the Fifth Assessment Report of the Intergovernmental Panel on Climate Change, this estimate closes the twentieth-century sea-level budget. Our analysis, which combines tide gauge records with physics-based and model-derived geometries of the various contributing signals, also indicates that GMSL rose at a rate of 3.0 ± 0.7 millimetres per year between 1993 and 2010, consistent with prior estimates from tide gauge records.The increase in rate relative to the 1901–90 trend is accordingly larger than previously thought; this revision may affect some projections of future sea-level rise.

Researchers have come up with a new and improved way of measuring the rise in the sea level, and the news is not good: The seas have risen dramatically faster over the last two decades than anyone had known.

For hundreds of years, the seas were measured by more or less the equivalent of plopping a yard stick into the ocean and seeing if the ocean went up or down. But now, that method looks to be outdated.

According to a new study published on Wednesday in Nature, the new method involves an advanced statistical model that analyzes all of the factors contributing to sea rise. It has yielded what appears to be a much more accurate picture of the oceans and suggests previous studies had severely underestimated the acceleration of recent sea rise.

“What this paper shows is that the sea-level acceleration over the past century has been greater than had been estimated by others,” lead writer Eric Morrow said in a statement. “It’s a larger problem than we initially thought.” Co-author Carling Hay added in an interview with BBC: “The acceleration into the last two decades is far worse than previously thought. This new acceleration is about 25 percent higher than previous estimates.”

The second paper is “Planetary boundaries: Guiding human development on a changing planet,” written by 18 climate change researchers and published in the journal Science. The abstract:

The planetary boundaries framework defines a safe operating space for humanity based on the intrinsic biophysical processes that regulate the stability of the Earth System. Here, we revise and update the planetary boundaries framework, with a focus on the underpinning biophysical science, based on targeted input from expert research communities and on more general scientific advances over the past 5 years. Several of the boundaries now have a two-tier approach, reflecting the importance of cross-scale interactions and the regional-level heterogeneity of the processes that underpin the boundaries. Two core boundaries—climate change and biosphere integrity—have been identified, each of which has the potential on its own to drive the Earth System into a new state should they be substantially and persistently transgressed.

At the rate things are going, the Earth in the coming decades could cease to be a “safe operating space” for human beings. That is the conclusion of a new paper published Thursday in the journal Science by 18 researchers trying to gauge the breaking points in the natural world.

The paper contends that we have already crossed four “planetary boundaries.” They are the extinction rate; deforestation; the level of carbon dioxide in the atmosphere; and the flow of nitrogen and phosphorous (used on land as fertilizer) into the ocean.

“What the science has shown is that human activities — economic growth, technology, consumption — are destabilizing the global environment,” said Will Steffen, who holds appointments at the Australian National University and the Stockholm Resilience Center and is the lead author of the paper.

These are not future problems, but rather urgent matters, according to Steffen, who said that the economic boom since 1950 and the globalized economy have accelerated the transgression of the boundaries. No one knows exactly when push will come to shove, but he said the possible destabilization of the “Earth System” as a whole could occur in a time frame of “decades out to a century.” 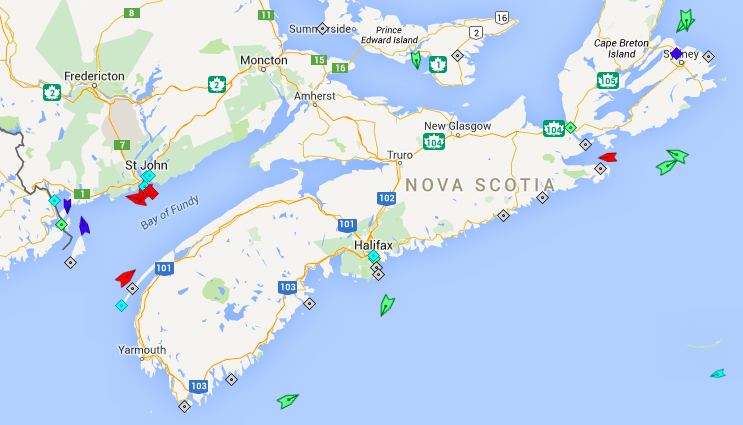 The seas off Nova Scotia, 8am Saturday. Map: marinetraffic.com