You are here: Home / Commentary / I know what you see 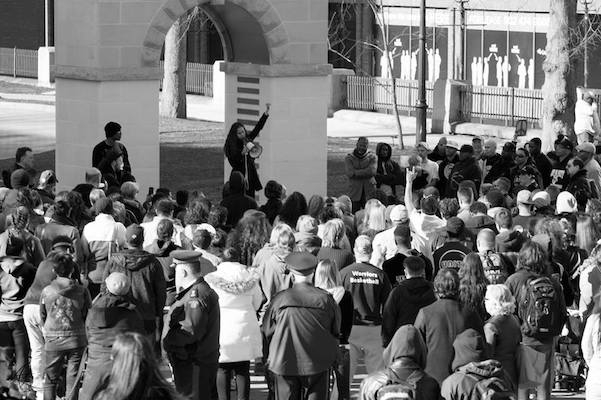 I know what you see
When the media reports he was known to the police
The incident took place on that block on Gottingen Street
And not the part where we eat or the part renamed Novalea
The part where those descendents of Africville be
And the part it would be better if it just became clean
Or maybe it’s how North Preston’s Finest is ten times longer than North Preston
On the Wikipedia entry
So I know what you see.
Little babies in bandannas who read at Grade Three
And I know that you look at them and see just some kind of killer
And media comments stop just short of calling us gorillas
Let’s be honest they say these weren’t exactly pillars of society.
The same media that’s only there to report on notoriety
And I know grown adults who have never seen variety
Never been in a museum or even left the block
And so we’re born and the hands start ticking on a clock
Because you make us raise our kids in the school of hard knocks
And you only hit the alarm once someone gets armed
But you close down our schools then accuse us of harm
And we’re so cute until we grow and then somehow we lose our charm
So that’s all you see
Little kids in the principal’s office before they can read
And the grade ones list me names of every dead person they know
Little boys who can’t even cry at the funerals they go
And then you come to our marches like its a show
And they never catch the people who make the drugs and guns flow
To little boys without a future when the game is the recruiter
When we can’t get jobs our only option is to ball or be a shooter
They put guns into our hands instead of computers
And drugs into our veins when there’s no other way to end the pain
And there’s never any help until we’re taking aim
As if when we’re born our only dreams are to get into the game
And then after all that you say the Black community should be ashamed
And we can’t even go to wakes without being under siege
When to mourn your son you have to walk by 20 vans full of police
And we can’t even grieve because they won’t let us rest in peace
And some other little boy that’s all he’ll ever see
And I know that’s what you see, suspects with t-shirts over faces
We sit in cells without our belts and with shoes without the laces
Little kids grow up without a father to put them through the paces
While the rest of the city says thank god the problem’s been contained
And no one cares about our lives until we become the cases
We disappear into the prison and then we’re just erased
We come from places where we can’t get pizza delivered
Where roads don’t get plowed for days after a blizzard
There ain’t no grocery stores
Can’t get a cab driver to drop you off at your door
And when the police raid your home the children hit the floor
And it ain’t no secret that poor and powerless is how we are living
And I’ve mentored brilliant artists from the time that they were childen
And then they grow up and I visit them in prison
As if we’re the ones at fault for the conditions we’ve been given
Little girls kicked out of school because they’re labelled bullies for a fight
While in their home their step father is touching them at night
And then they’re traded in the game and their names are out of sight
And I’m tired of seeing youth with so much pain behind their eyes
And all you see is some young thug who’s throwing up gang signs
While there’s lines tattooed on his skin to my brother R.I.P.
But when he walks around downtown you move across the street
And when she walks into a store you call security
And when we’re seen as a problem that has to somehow go away
And our elders remember Africville like it was yesterday
And now new housing regulations say can’t have a business in the home
So the little that we have we can’t even call our own
Make noise after 9pm and they’ll throw you in the streets
I don’t know how you can’t see that my people can’t even weep
400 years of suffering this pain until the wounding runs so deep
And I know brothers with so much trauma that they never even sleep
And I’m scared to have a son because I don’t know if I can keep him alive
When it seems the only time you pay attention is when we’re committing drive-bys
And then you blame the mothers and say if she only raised him right
And when we turn the violence on ourselves you won’t call it suicide
And you’ll never ask what happened to make this young man die
Or to make this young man kill
When trying to make it out takes almost impossible acts of will
Even when we have the talent and the skill, in the studio or court
But most of our kids get out of high school and then there’s no support
I can’t forget we come from people who were traded sold and bought
When we’re still being valued by society and always falling short
And I know with every death you see us more as a threat
And you make all sorts of judgements about people you never met
And I don’t understand how you can watch this and your eyes aren’t even wet
But I know what you see.
Thugs and gangsters all we be
In newspapers and TV. All over this city.
I know what you see.