You are here: Home / Commentary / “I Am Queen Mary”: a story of Black liberation, art, and dental intervention 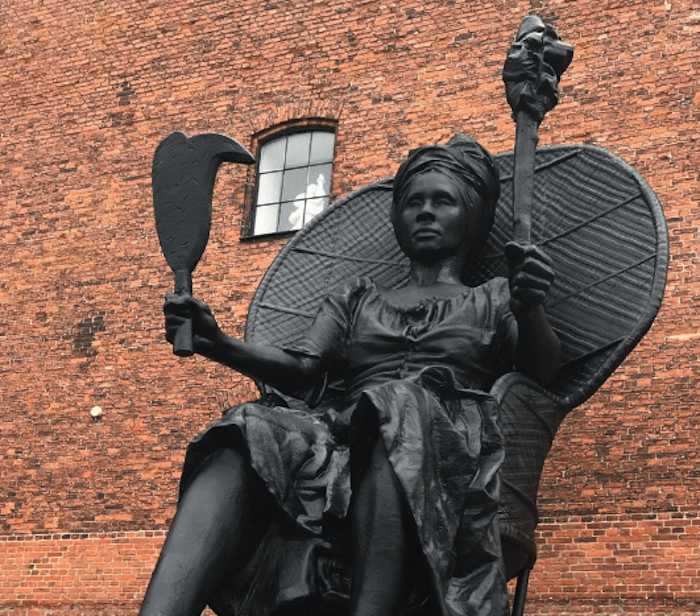 As a Black woman who marks a dental visit in Denmark as a milestone in my life, I was thrilled to learn that the country now boasts a major public art work that honours a woman of African descent.

Recently unveiled in Copenhagen, the “I Am Queen Mary” statue pays homage to Mary Thomas, a Caribbean woman who, in 1878, led a revolt against Danish colonizers in the West Indies. Hailed as “the three queens,” Thomas and two other Black women commandeered the uprising that set ablaze fifty sugar plantations and most of Frederiksted, St. Croix.

Denmark maintained settler rule over St. Croix, St. John, and St. Thomas until 1917, when the country sold the islands to the United States. The towering statue stands as a powerful collaboration between Jeannette Ehlers, a Danish artist of African ancestry, and La Vaughn Belle, a native of Trinidad and Tobago.

My sojourn in Denmark began in the 1970s as a lighting design apprentice at the Aarhus Theater in Aarhus, the second largest city in the country. One day, while working on stage, I detected a loose filling in one of my teeth. A Danish colleague arranged an appointment for me at the University of Aarhus Dental School.

Having envisioned a “quick fix” to replace the filling, I was blindsided by news that I was afflicted with a severe case of periodontal, or gum, disease. Without emergency treatment, dental school officials warned, I risked losing all of my teeth. Then age 22, I began to sob.

Infinitely compassionate, the dental staff comforted me. Moreover, they immediately scheduled me for a year-long series of surgical procedures — including a bovine bone graft — that strengthened my gums and saved my teeth. Set against the backdrop of current media reports (April is oral health month) about a private Canadian dental system that precludes multitudes from receiving even basic care, it’s not been lost on me that my extensive treatment in Denmark was free. There is much to admire in the country’s comprehensive government-funded dental, medical, education, housing, and other social support programs.

Fast forward forty years. Diligent (if not obsessive) about my oral hygiene, I’d not lost a tooth. Then, a restoration began to fail and I was poised for an extraction. My spirits tanked.

Research shows that the emotional impact of losing teeth is woefully underrated. Indeed, a 2010 study in The British Dental Journal revealed that tooth loss often prompts reactions such as guilt, shame, concerns about appearance, and premature ageing.

By chance, the cosmic forces ushered me to Alison Tuton, a registered dental technician at Dalhousie University Dental School. Tuton referred me to Dr. Andrew Nette, who extracted the tooth and, over the course of a year,  prepared me for an implant, or fixed dental device. 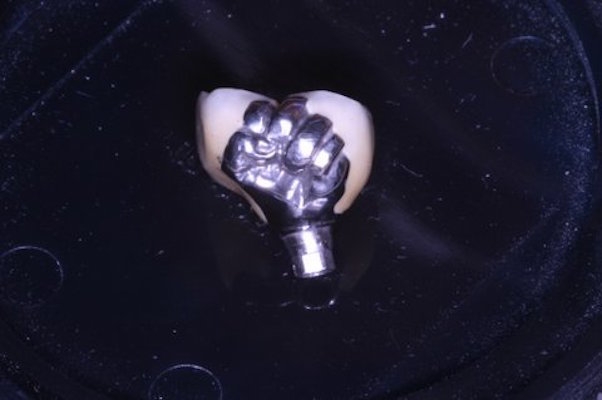 Unbeknownst to me, Tuton had secretly been working to handcraft an implant that she hoped might ease my despair about losing a tooth. Hence, she one day delivered to Dr. Nette a blue velvet ring case. Instead of jewelry, the box contained a gleaming porcelain molar that showcased an enduring symbol of the Black liberation movement — a raised fist. I was speechless.

Now permanently affixed inside my mouth, the “raised fist” bridges the years between the crisis surgery I underwent in Denmark and the excellent dental health I enjoy today. Indeed, I recently returned to the University of Aarhus Dental School to “share” my implant with current faculty and staff. I cried, again. 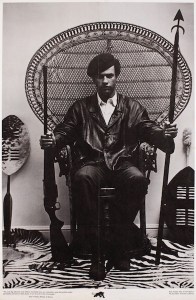 The spectacular “I Am Queen Mary,” statue mirrors the iconic photograph of Black Panther leader Huey Newton (1942-1989). Adorned in a black leather jacket and black beret, Newton is seated in a fan-shaped wicker chair, posed with a spear in one hand, a rifle in the other.

Perched on a similar chair, the turbaned Black female statue wields a torch and a knife used for cutting sugar cane. In real life, Mary Thomas was sentenced to death for leading the 1878 rebellion. She was later imprisoned in Denmark and then returned to St. Croix where she was reputedly held in bondage until the end of her days.

Forever transformed by my experiences in Denmark, I’ll salute Thomas’s memory when I next visit Copenhagen. Picture me, head bowed before a Black “queen.” I’ll offer a raised fist, both literally and figuratively.