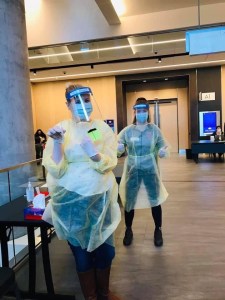 Lauren Mills heard about volunteering at the pop-up testing site at the convention centre from a friend from university. Mills lives downtown and has some free time, so last week she signed on to help. She got a call an hour later.

Mills has been volunteering at the site for a few hours every day since Friday, swabbing noses of people stopping in. That night, people lined up around the block to get tested. So far, Mills has swabbed the noses of at least 25 people each shift. She tells people the swab is not that bad; just like a tickle and their eyes may water. She asks if they want her to swab a particular nostril.

“People laugh at that,” she says. “It’s really straightforward once you get the hang of it. At first, you’re a little nervous, but it’s very straightforward. Anybody can do it.” Mill’s had the test done four times herself

Mills is one of hundreds of people across Nova Scotia who have volunteered to work at the rapid test sites, including the one downtown and pop-up sites elsewhere. People often stop in to the convention centre site on their way to a restaurant or a bar. Almost everyone working at the sites is a volunteer, including the greeters, people at the registration desk, swabbers, and those who test the swabs and text out results are all volunteers. 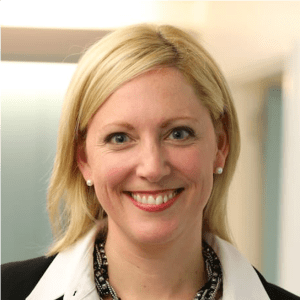 The rapid pop-up testing events are the idea of Dr. Lisa Barrett, a Dalhousie University infectious disease specialist, physician, and researcher. While the rapid testing events for COVID-19 are new, the concept of on-the-go testing done of peers by their peers is not. Barrett says her research team has done similar work with community groups around testing for Hepatitis C and HIV. She says that work was just getting started on that work with the pandemic hit.

“I love the fact people take it and own it,” Barrett says. “There’s not a lot of difference between the people running the event and the people coming in to get tested. They are the same groups of people. I’m very excited and I hope we can extend this further, so people don’t think of things related to health like this test as something that’s not theirs. This is theirs to own.”

“I thought we’d see fewer people over time volunteering to be involved,” Barrett says. “We really haven’t seen that. People have been very keen to stay as volunteers and stay engaged. It has definitely exceeded my expectations. Nova Scotians from all walks of life have been volunteering and that has completely blown me away, not just in the sheer numbers, but also the longevity of the response.”

New volunteers have to arrive to the site about an hour and half before their shift starts to get some training. The trainer stays with that volunteer until they are able to perform the task. At the convention centre site, there can be about 100 volunteers every day, depending on how busy it is. Some of the volunteers have been helping out since the first events in November. About half of the volunteers at any given event are return volunteers, while the other half are new. 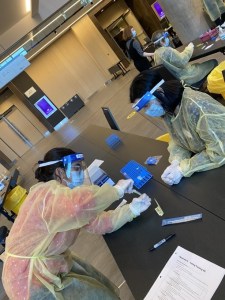 For the testing at the convention centre, many of the volunteers are staff from downtown bars and restaurants. Others work at the convention centre. The Downtown Halifax Business Commission and the Halifax Chamber of Commerce have put out the word about volunteer recruitment through their social media. Halifax Noise often shares the volunteer recruitment on its Facebook or Twitter accounts. Volunteers can also sign up by filling out this online form.

There is music playing and it’s very social. Mills says everyone is smiling and saying thank you to people getting tested. She says she’s social and outgoing, so one of the benefits of volunteering is working with the public.

“I used to bartend so this is a lot like bartending, but there are no tips,” she says. “And we’re doing our part.”

Barrett says that relaxed, social atmosphere is a “backbone” of the testing sites — they aren’t clinics where you’re getting a medical test; they’re community events.

“Our goal is not for people to be getting a medical test done,” Barrett says. “You’re here to get part of your safer COVID living plan done, which includes this particular COVID assessment. I think people are much more relaxed. They don’t have to have a health card or if they have an expired health card they don’t have to worry about it. There’s a lot of joking around and a relaxed environment that really destresses people compared with a more formal environment.”

Other pop-up testing events in the HRM and across the province are organized by Praxes Medical Group. Richard MacDonald, a project manager with Praxes, organizes those events and recruits volunteers. There’s a pop-up in HRM and another one somewhere in one of the other health zones once a week.

MacDonald says just about 1,000 volunteers across Nova Scotia have signed on the last few months to help at those sites. Anywhere from one to 14 volunteers work at a pop-up site, depending on the location of the site itself. MacDonald says when he’s organizing a pop-up, he looks for a local champion, like a radio personality or a mayor, who helps recruit volunteers. Volunteers can also sign up by emailing [email protected].

“These people are so happy to come and volunteer their time,” MacDonald says. “I was not expecting that when I started working these pop-ups. You get people from all walks of life coming in and working together, willing to learn a new thing and willing to be very flexible. Without the volunteers, we would not be able to process the amounts of numbers we get when we are busy. We truly never know how many people are going to come through the door.”

Like the event at the convention centre, volunteers run all of the roles at the Praxes sites, from greeters to screening. All volunteers receive training and those volunteers doing the swabbing have more training. (All volunteers have to pass COVID screening first). The swabbers are taught how the swab goes in the nostril, how far it goes in, and what it feels like. That training takes about 40 minutes and MacDonald says a quality check is done after a volunteer has swabbed about 10 people. Swabbers get a one-page script they have to practice on how to explain the test to those coming to the site. He says they never had to take a person off swabbing because they weren’t doing a good job.

“The script is very good at not only making the swabber calm, but the person getting tested calm,” MacDonald says. “We don’t generally let them start working with the public until they have the script down, so they are explaining everything clearly.”

Like the site at the convention centre, the Praxes events have a social aspect with music and a casual atmosphere. MacDonald says many of the volunteers at the HRM pop-ups bring their friends in to get tested. Then they share the photos on social media. But they also remind others to follow the public health protocols.

“We have some volunteers who come to almost every site,” MacDonald says. “It’s a rare opportunity when you think about it. We haven’t seen anything like this before. The people from the public being tested by other people from the public. Part of the model has shown you can quickly train someone that has no medical background to do something that was normally a load on the healthcare system.”

Mills plans on volunteering for a few more weeks as she’s needed. She’s even helping with the social media now, tweeting out photos of the volunteers at work. She encourages others to sign on to volunteer, too.

“You don’t have to swab,” she says. “You can do the testing. You don’t even have to interact with other people. There are so many different roles. It’s a very appreciative group; they’re so happy people are there.”

And she’s also telling people to get tested often.

“When you make it normal to get tested, more people will do it for their community and protecting each other.”