You are here: Home / Featured / How to heal with furry companions 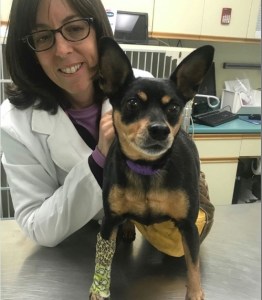 As stories and photos of the victims from the weekend’s mass shooting circulate on social media and news websites, there are other victims’ stories we’re learning now, too. They are the pets of the victims, some of whom were injured in the shootings themselves.

There is Zoey, a miniature pinscher, who was owned by Jamie and Greg Blair. Zoey was shot in her hind end and brought to the Central Nova Animal Hospital by RCMP Cst. Rodney MacDonald. There, Dr. Jennifer McKay operated on the nine-year-old dog, who is now recovering nicely. She will soon be back with young Alex and Jack Blair.

Ginger, a German Shepherd, and Ellie the Chihuahua were owned by Gina Goulet, the denturist from  Shubenacadie who was killed. Ginger was shot in the face and leg, while Ellie escaped unharmed. The staff at the Metro Emergency Care Clinic in Dartmouth took Ginger in and she’s now recovering at home with Amelia and David Butler, Goulet’s daughter and son-in-law. David posted a photo on his Facebook account showing Ginger lying at his feet, while Amelia slept beside him. Ellie sat nearby with Butler’s dog, Buzz, a Boston terrier. 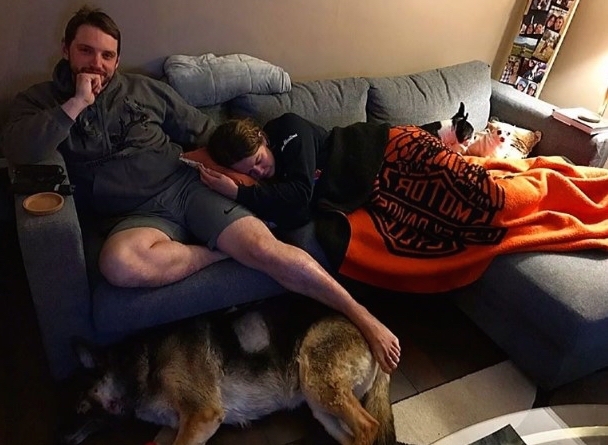 We will never know what Zoey, Ginger, and Ellie, and possibly others, witnessed or experienced in the rampage. But pets, like humans, suffer after such trauma and with the grief of losing their owners.

Dr. Karen Overall is a specialist in veterinary behavioural medicine and teaches small animal behavioural medicine at the Atlantic Veterinary College in Charlottetown. She says animals can experience trauma like humans, but they don’t know how to comprehend what happened. “For dogs, cats, horses, and other animals, events like this can be shattering in another way because they don’t have the context in which they can ask why this happened,” Overall says.

She says dogs that experience trauma can develop panic disorder and noise phobias. Some breeds, like Border Collies, are more susceptible to being reactive to noise. Rescue dogs can have a tougher time with trauma. “Rescues can handle death but they are not good at absence [of owners] because of their history,” Overall says. Some dogs do better if they are able to see their owner’s body, at a funeral for example. She says dogs shouldn’t be forced to see a deceased owner, but should have the option.

Overall says PTSD is less common in dogs, but still possible. It’s often a bigger problem for dogs that work in military service and war zones. Dogs can develop depression, too, although that is less common.

Overall says dogs with PTSD can go on to live healthy and happy lives. She’s owned rescues that had PTSD, including Picasso, who died last August. “He had a wonderful life and I miss him greatly. He was a great companion,” Overall says. 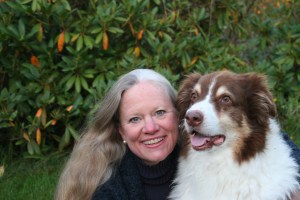 Dr. Karen Overall is a specialist in veterinary behavioural medicine and teaches at the Atlantic Veterinary College in Charlottetown. She’s worked with dogs with PTSD, including her own rescue dog, Picasso. Photo: Karen Overall

Overall says if there was fire at the scene where the dog was, that will affect their responses, too. She recalls working with one dog that developed PTSD after surviving an apartment fire. While the building burned, the dog was in its crate. It was rescued, but that trauma lived with the dog afterward. “You couldn’t show that dog a crate without them showing the range of signs,” Overall says.

Overall recalls going to Japan about a year and a half after an earthquake in Kobe in 1995 that killed more than 6,000 people. She attended talks given by the humane society there on the pets rescued from the rubble of buildings. Of the dogs that survived, some were unharmed, while others suffered terrible injuries. All were in shock, thin, and hungry. Overall says some of the dogs became deranged, others were very reactive to sounds. The rescuers, however, couldn’t find any cats and suspected they were all killed. Still, they left out food, just in case. And within weeks the cats came back. “They all hid and did what cats do, which is modulate their own stress levels,” Overall says. “Those cats often went back to their owners’ homes.”

Cats deal with trauma in different ways than dogs. “Cats tend not to feel helpless, but they become distressed,” Overall says. She adds when cats are stressed, they will stop sleeping, stop using the litterbox, and they will hide. “That’s what they do to survive,” Overall says. Cats that have experienced stress are also at higher risk for developing urinary tract issues.

Still, there is hope for the pets that were in traumatic situations. “Dogs do a lot better in many ways than we do,” Overall says. “They don’t have people telling them how to recover. The dog can help put their lives back together once the dog is put back together. They have not lost their capacity for joy.”

She says there are a number of signs new owners need to watch for in dogs. First, how are they sleeping, are they waking up often? Dogs can have nightmares after trauma, too, some of which Overall says can be explosive. Second, is the dog eating, enjoying its food, or do you have to coax them to eat? Third, are they exhibiting normal behaviour? Do they still enjoy some of the activities they enjoyed before the trauma occurred? And finally, some dogs will cope by using repetitive behaviours like sucking or chewing on body parts or their favourite bedding. “That can turn into serious self-injury,” Overall says.

But it’s also important the new owners understand what the animal’s behaviours were before the exposure to the trauma.

These pets, like Zoey, will be incredibly important in the recovery of the children whose parents were killed. Overall says children will connect with pets in a way they won’t connect with adults. For example, she says dogs are often used in courtrooms where children have to testify. “The repository of all the horror, the secrets, the scary thoughts, the dogs will know all of that,” Overall says.

She says one of the ways owners and pets can cope with trauma and heal together is by taking some training and learning new skills. That might be especially helpful for the children who own the pets. Such training can build the child’s and the dog’s confidence and teach them resilience. They can work on ways to deal with grief and stress together. “If the child focuses on the dog, and the dog focuses on the child, it can be a real accomplishment.” 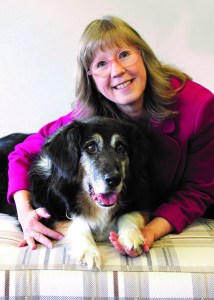 Dr. Debbie Stoewen is the is the Director of Veterinary Affairs for LifeLearn at Guelph University. She studies the bond between humans and animals and has owned many pets of her own, including Max. Photo: Debbie Stoewen

Debbie Stoewen works as the Director of Veterinary Affairs at LifeLearn Animal Health in Guelph. In her PhD research, she studied the bonds between humans and their pets with life-threatening cancers.

Stoewen says there are ways for new owners to help pets adapt to a new environment, especially if the pet is grieving. Let the pet choose their own safe space in a new home: cats prefer higher-up spaces; dogs like closets. Take along any belongings or bedding the pet had in their former home. Put out a piece of their former owner’s clothing so they can take comfort in the scent. If the pet is not eating, make their food more appealing by heating it up or adding treats. For cats, put a lot of litter boxes around. For dogs, give them a distraction like games or toys.

She says there are benefits for both owners and pets when they heal from trauma together. Pets offer a constant presence and loving, emotional support. Animals need to eat, drink, and be walked, so that kind of schedule encourages normalcy and structure. “We have to take care of our own physical and mental health while we take care of something that depends on you,” Stoewen says.

People also act as a bridge to connect those dealing with trauma to connect with others, whether that’s talking with the vet or another owner walking a dog on the street. Stoewen says when people grieve, they pull into themselves, but pets help draw them out. “You can talk to your pet but because they can’t respond they will never say the wrong thing,” Stoewen says. “You know it’s a safe space.” That’s especially true for children, who may not know how to — or want to — talk to an adult. Children will project their feelings onto a pet instead. Dogs will also be a child’s protector. “Dogs help us to remember trust because they are so trustworthy themselves.”

Pets also offer some comic relief in an innocent, spontaneous way family or friends can’t, even if they’re trying to be helpful. “They brighten an atmosphere and change the mood in a room. It allows people to relax.”

Stoewen says pets also live in the moment and don’t hang onto negative emotions, so they act as a role model that way, too. Pets can teach their owners resilience and help show people the way forward to heal. “You need to be able to release the anger and resentment,” Stoewen says. “If you don’t release that, you can’t heal.”

Stoewen says in her research between owners and their pets with life-threatening cancers, the owners often said how they felt their pets were their inspiration. “The dog doesn’t know it has cancer; it just keeps going.”

And finally, pets offer unconditional love. “Pets accept us wholly and completely as we are. That can help remind us to accept ourselves.”